British young gun; Dan McLay has been hammering at the door of recognition in Belgium for a few years. But this season he has seen him add to his palmarés with the points jersey in Normandy and a stage win in the Tour de L’Avenir. Pro contract in ’15? Ed Hood caught up with Dan as he was about to start the Tour of Britain.

The Vuelta is in full swing – but where will the next generation of Grand Tour riders come from? To find that out you have to look to the big U23 races, the Valle d’Aosta and ‘Baby’ Giro in Italy – and the Tour de L’Avenir in France.

A young man who’s been burning up the roads of Belgium for some four seasons is Briton, Dan McLay who rides for the Lotto feeder team. We interviewed him back in March 2011 as he was about to start his stint with the Davo/Lotto development team.

The New Zealand born 22 year-old has already been a world champion in the junior madison with Orica-GreenEDGE’s Simon Yates in 2010 but the real fame – and cash – is on the road. This year McLay took a stage and the overall points award in the tough Tour of Normandy and recently won a stage in the Tour de L’Avenir – one of the world’s premier races for U23 stars of the future. 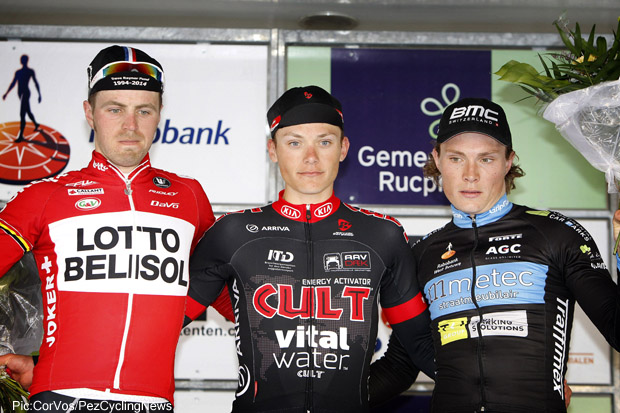 Here’s what he had to say to PEZ about his L’Avenir win, the season so far and his hopes for the future:

PEZ: Tell us about your L’Avenir stage win, please, Dan.
It was a bunch sprint but it was a really hectic last five or 10 K and it ended up being a really long sprint after a big effort to stay up at the front. I came from around 20 back with 500m to go. As I came past the main mass of riders, there was a Colombian with a bit of a gap out front and a Dane starting his sprint with around 250m to go. I was a bit worried with the Dane, having come out of the wheels a lot later I might not get there but I managed to get round on the line. 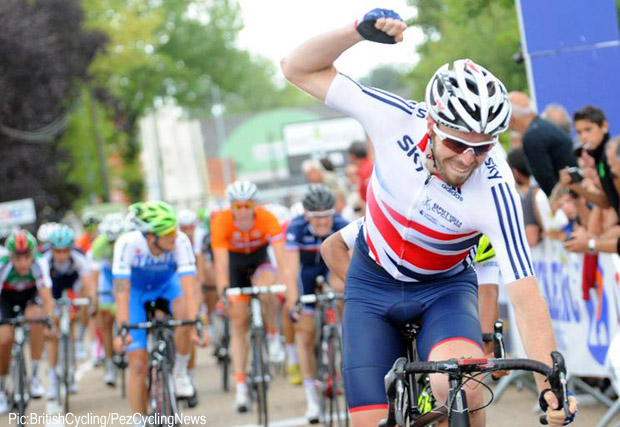 PEZ: And top ten in the prologue and fourth on Stage One?
Yeah, I had good legs on the sprinty type stuff. I was running out of gas on the harder stages as I’d had some stomach trouble and was low on energy. I managed to get the results in when the stages suited me. The prologue was a bit of a surprise as there was quite a steep climb in the course, I think I could have ridden it a bit better but was pleased to be in the top 10.

The fourth place was a bit of a disappointment to be truthful as I won the bunch sprint easily behind a break of three and maybe we should have taken a bit more responsibility to chase as a team that day? 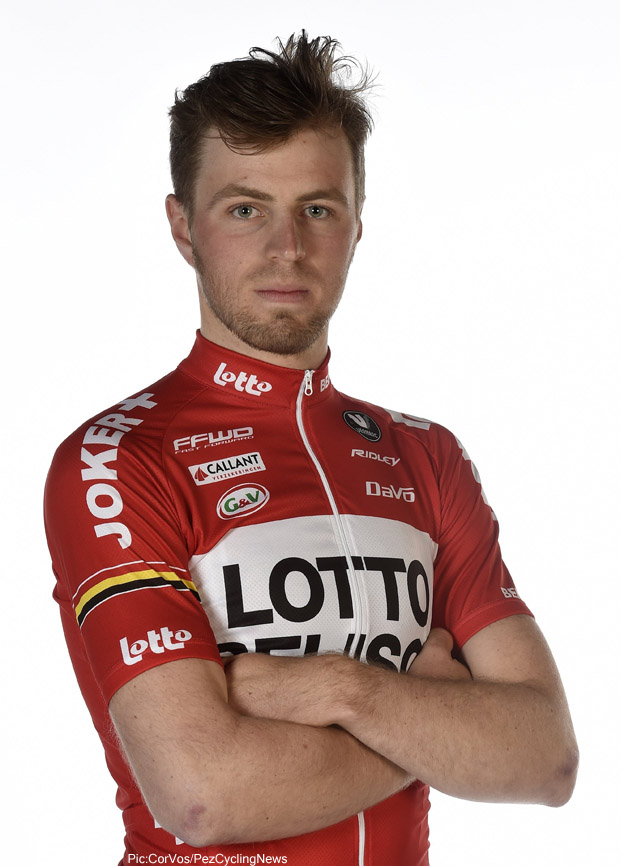 Can Dan turn his development team jersey into a ProTour one?

PEZ: L’Avenir is one of the pro talent scouts shop windows – any phone calls or emails?
So far not a lot of news but I hope I’ve shown what I can do now and something will come.

PEZ: Do you have an agent?
DM: Yes, Paul de Geyter and Dries Smet (Celio sport and image).

PEZ: Season 2014 started well – second in the Rabobank Dorpenomloop Ruchpen from a quality field.
Errm, yes, although I’d put that down as more of a disappointment, my gears were jumping in the last kilometre and in the sprint so I was pretty pissed off! I’d say my season took off in the Tour of Normandy where I won a stage and took the points jersey; I was chuffed to bits with that. 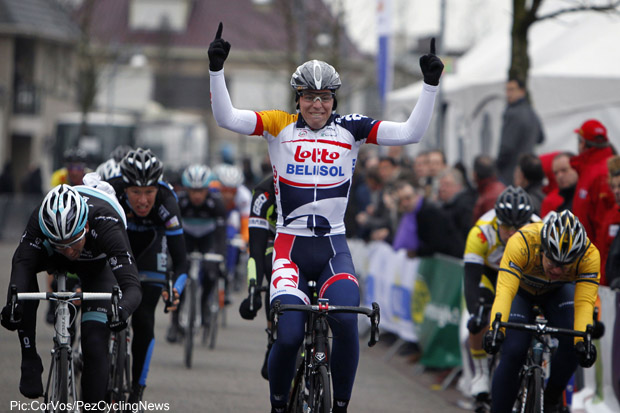 PEZ: Tell us about the ‘Carpathian Couriers’ stage race – it sounds interesting.
Yeah; I broke my collarbone a few weeks before in the Tryptique Monts et Chateaux stage race so it was a bit of a comeback race for me. There were stages in Hungary, Czech, Slovakia and Poland so it was nice to see some of those places.

It was a nice race with some climbing but not too much. There was quite a few sprints but a lot of downhill finishes with corners with 100m to go so I uncharacteristically bottled it a couple of times after having just broken my collarbone!

PEZ: And you’re time trialling well – third in the British Champs.
Yeah, I thought about not starting at the last moment with the very heavy climb in the course but I’m glad I rode. I think in a prologue type time trial I can do some pretty good rides and occasionally on a longer one with a little bit of prep. It’s not something I enjoy much but I don’t think many guys do! 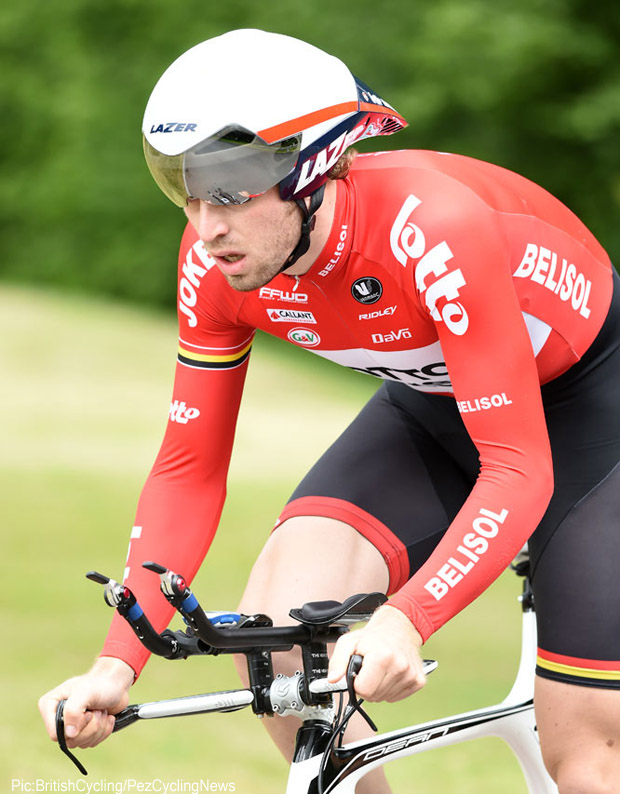 In TT mode at the GB National championships

PEZ: You’re obviously at a higher level this year than the last two seasons – why do you think you’ve moved up?
Yeah, I’d say last year I wasn’t far off but just wasn’t quite winning, sometimes due to circumstance and other times due to missing a little bit of edge. The last two seasons I’ve had a coach (David Bailey) – not having had one before and I think it’s really starting to pay off. This year I’ve added a bit more top end stuff on top of what I was doing last year. Also I’m more confident now in the finish of a race and will push a bit more wind to guarantee being in a good position and sprinting with what I have left rather than saving everything and coming from too far back like have done in the past.

PEZ: Are you still staying with ex-British pro champion Tim Harris in Belgium?
Yeah, I stay with Tim and his wife Joscelin during the season although this year I’ve hardly been there with the amount of racing abroad I’ve been doing and a few weeks back home here and there. 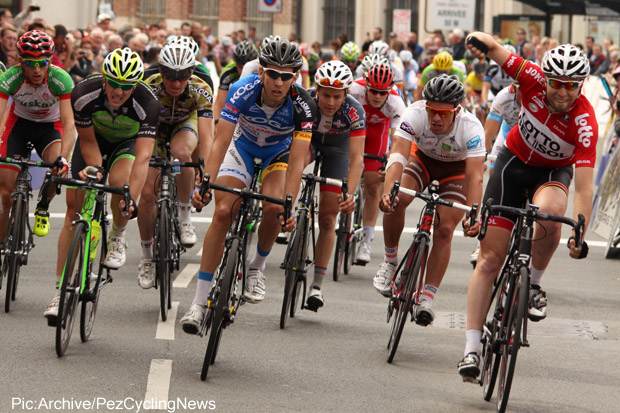 Another win for Dan

PEZ: How’s the Vlaams?
I’ll be honest; I can’t speak an awful lot. I can understand a fair bit though and I’m fine with all the team meetings in Dutch and can follow most conversations but only about 50% of the jokes.

PEZ: Do Lotto provide your coaching?
No, I’m coached by David Bailey who I came across when I was 15 and did a lab test at Loughborough with him through British Cycling. When I was looking for a coach a couple of years ago, I came across him again and remembered having done that test and went from there.

PEZ: Who do you train with?
A couple of British lads called Jake Kelly and Calvert Churchill who live with Tim as well, so a fair bit with them and occasionally with Mark McNally (AN Post pro) and there’s also an Aussie chap a few Km’s away so it’s no wonder the Dutch isn’t great!

PEZ: How does Lotto feel about you going to ride for the team GB?
I think with it being a development team they are happy for me to get all the opportunities I can get. 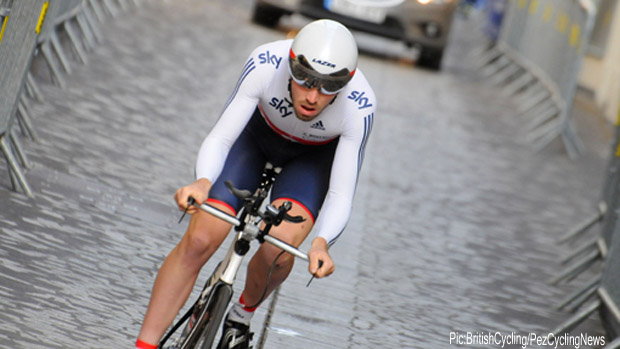 Top Ten in the L’Avenir prologue

PEZ: What’s on the agenda for the rest of 2014?
Hopefully the Tour of Britain, I’ll know for sure later today (Dan does indeed ride in the GB team and was 7th on stage 1. Ed.). After that I’m not certain, maybe the Worlds, I’ve heard the climbs aren’t too steep and with the U23 category you never know it could still be a reasonable sized group coming into the final.

PEZ: What are you looking for from 2015?
I’m looking for a pro contract. I think I’ve done the results to make the step up this year and if I get something I’ll see what the team wants from me.

PEZ: And if you could win just one race, it would be . . .
DM: That’s a tough one.. I think after spending four years in Belgium I’ll have to say the Tour of Flanders. 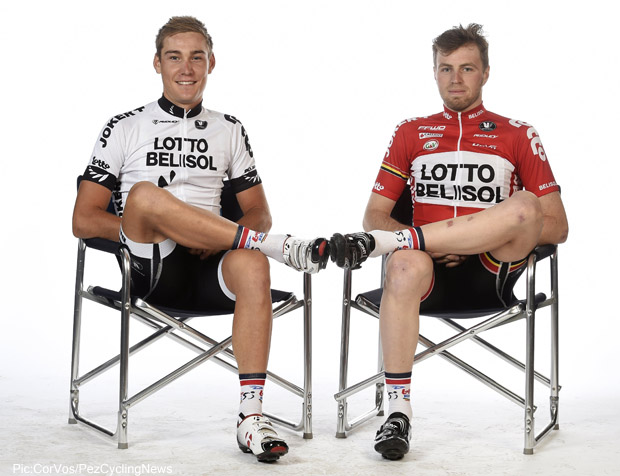 Valverde: Competitive Until the Very End