Rider Interview: Track trail-blazer, US Criterium Champion and style guru; what more could you want from an interview subject. Ed Hood caught up with US Six Day star Daniel ‘Hollywood’ Holloway at the first event of the winter season in Amsterdam to find out what makes this flamboyant character tick.

‘Hollywood’ they call him and not without good reason; Daniel Holloway is the man with the trendiest Oakleys, the loudest graphics on his disc wheel – and he may even just turn up in a Batman suit…

But behind all the zany stuff there’s a serious athlete who looks at every aspect of his preparation from training to diet to running ceramic bearings. Season 2014 saw the Athlete Octane man win 21 times – including the US Amateur Criterium Champs – off 64 starts with 40 podium finishes. Those are outstanding stats, by any measure. 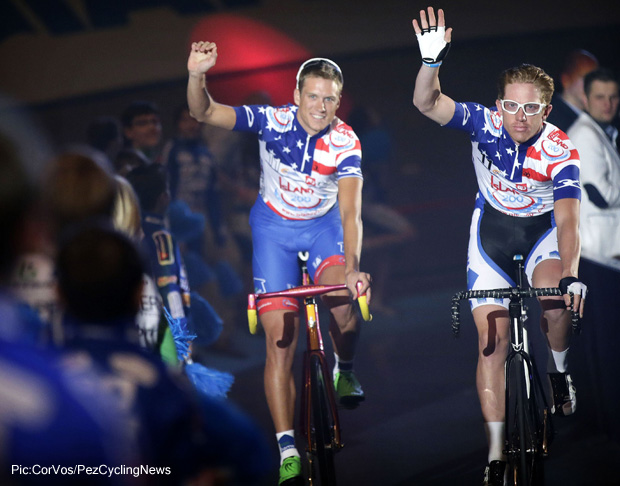 We caught up with him as he prepared to ride night four of the Amsterdam Six Day race:

PEZ: Five wins in 2013, Daniel and 21 in 2014, how come?
I had more race days for one thing but didn’t really change my training – once you get the ball rolling and get that first win maybe you train a little bit harder, eat less ice cream!

Winning is addictive, it feels good and you want more . . .

PEZ: Best win?
The first one, it was a little under a year since I’d won a race. And to win the crit champs was a great feeling, going in carrying the weight of expectation and succeeding. And there’s the Athens, Georgia crit – it’s unique and to add my name to the roll of great US riders who have won there was special. 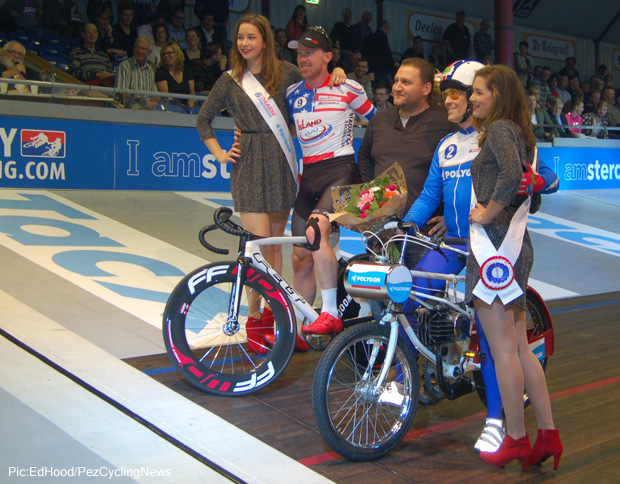 PEZ: Athens is ‘the’ race for atmosphere, then?
It’s insane, the city has adopted the race as part of it’s culture and there are 50,000 people partying around the course. It’s crazy, you can feel the electricity in the air; I mean, in some races there’ll be a section of the course – like ‘The Wall’ in Philly – where there’s a real atmosphere but in Athens it’s like that all around the whole circuit – electric.

PEZ: What’s the toughest crit?
It’s hard to say but Snake Alley in Iowa has a twisty climb and that’s pretty tough. ‘Sunset’ in the Redlands race is hard but I just didn’t have the legs to win that one – but I’d like to. I just missed the split, this year. 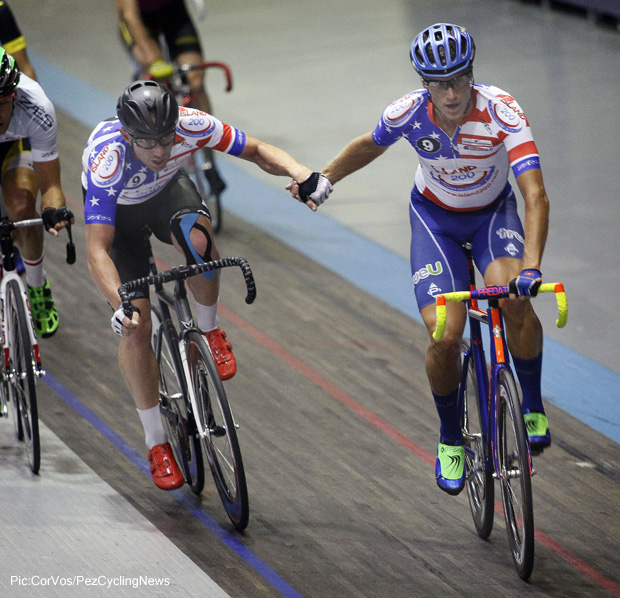 PEZ: Do you have a special bike for the crits?
No, I ride my Felt AR2; it’s an amazing bike, it performs so well, it feels like a road bike but rides like a time trial bike in terms of rigidity – but there’s just enough flex for your tyres to stay in contact with the road over rough surfaces on corners. I ride 172.5 mm cranks and a 52 ring with 11 up, it’s the first time I’ve ridden a 52 instead of a 53 and it’s been perfect except for one downhill sprint where I could have used the higher gear. I have a 36 inner ring but it’s not very often you’re in that – Snake Alley and a handful of other crits.

I have ceramic bearings in my bottom bracket, hubs and rear mechanism pulleys but to maximise on the benefit from those you have to make sure that your drive train is clean – no dirty chains or black sprockets so you’re taking full advantage of the watts the ceramics gain you. On Athlete Octane we don’t have a mechanic, cleaning your own bike keeps you grounded, in touch with your machine – leaving it all to a mechanic can mean you end up spoiled. 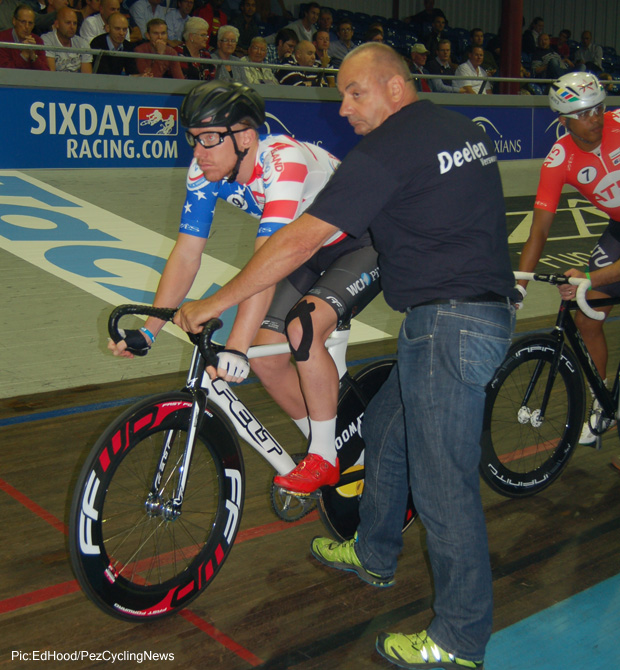 Ready for the start

PEZ: Pre-race rituals?
My tin of Red Bull – it doesn’t work for everyone but it does for me!

PEZ: This six day (Amsterdam’14)?
My legs are still tight, they’re freakin’ out due to my lack of track time. It’s a strong field at the top end here and I haven’t yet got used to the switches in tempo you get with a field like this with such a spread of abilities. 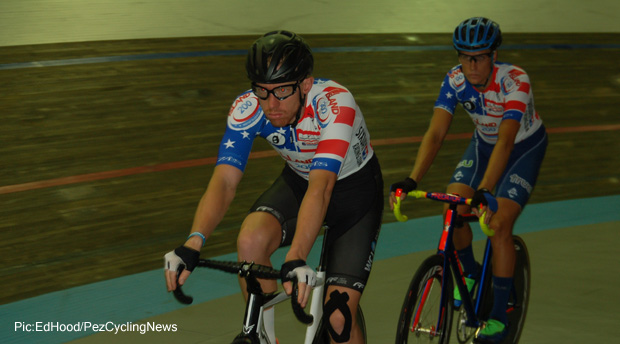 Daniel and Guy in Amsterdam

PEZ: How many six days, now?
This is number 21 or 22 with my first coming in 2008 – there’s been a change of guard since then. There were Stam, Slippens, Bartko, Risi, Betschart, Marvulli, Zabel, Llaneras – it was cool racing against those guys and it’s part of the journey to watch them retiring, one by one. It’s different now, a different M.O. the depth of field isn’t there and you have a different rhythm – there were more specialists back then. There’s more money on the road so guys don’t need to ride the sixes to make money – Leif Lampater is maybe the last of the ‘pure’ six day guys.

PEZ: Is everyone safe in this peloton?
Yeah, they’re good, it’s the first six for a couple of guys so maybe they’re a little short sighted about how things play out. It’s a small track at 200 metres and it’s also pretty narrow too so you will have “moments.” 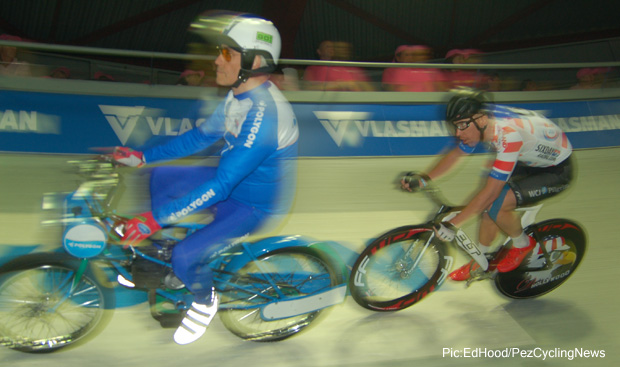 Behind the Derny with his US eagle rear disk

PEZ: Do you have any other contracts?
I have a ‘soft’ contract for Berlin but it’s new management for Rotterdam …

PEZ: What’s the worst part of the sixes for you?
The adaptation, it’s hard to find the rhythm and it takes a while to find your track legs. But I enjoy all of the rest of it – it’s a good lifestyle and I acknowledge that I’m fortunate to be a part of it. 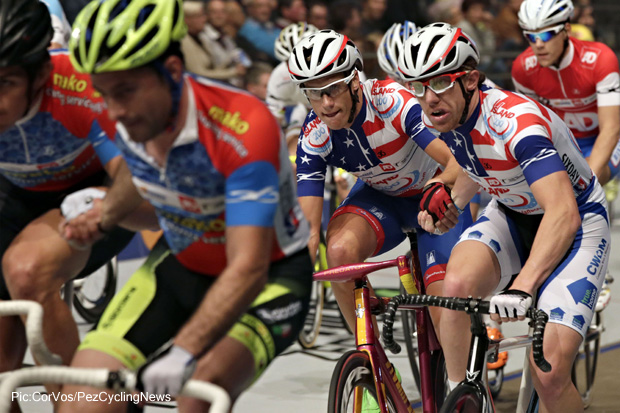 PEZ: Is Colby Pearce still your coach?
Yeah but I’d define him as a more my ‘adviser’ – he knows me really well from when we rode the sixes together. I tell him how I feel and what my short and long term goals are and he fine tunes things with me. You could say that I give him a rough piece of wood and he whittles it into shape for me. He’s a busy guy so it means he has to do less work for me – it’s less stressful for us both. But one of the big imponderables about cycling is the travel – you never know quite how your body is going to react.

PEZ: Disappointments in 2014?
Not making it to the front group in Sunset at Redlands – but I’ll be better prepared for it in 2015. I know that all I have to do is turn up a kilo or two lighter and I’ll be there. 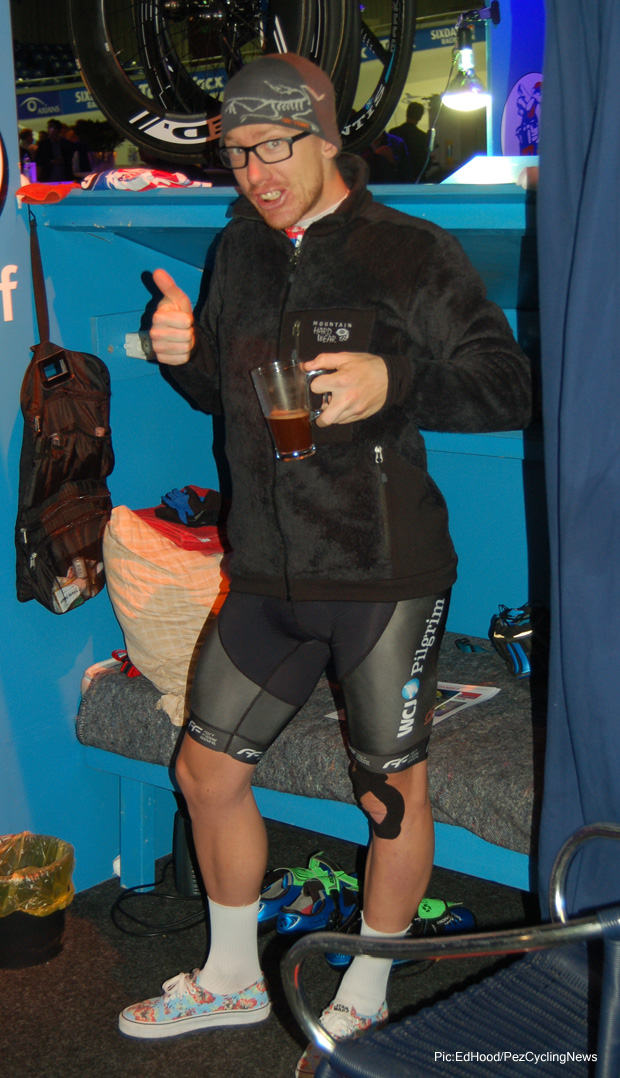 That man likes his coffee

PEZ: What’s the latest coffee update?
I’m still with Bullet Proof, part of my routine every day is my coffee ritual. It’s a solid task I set myself every morning to set me up for the day.

PEZ: 2015?
To repeat this year; that’ll be hard but once you get the first couple of wins under your belt it becomes easier. But then when guys see you winning regularly they want to stop you and it gets more difficult. I want to be relaxed, have fun and not worry about whether or not I’ve done enough training. 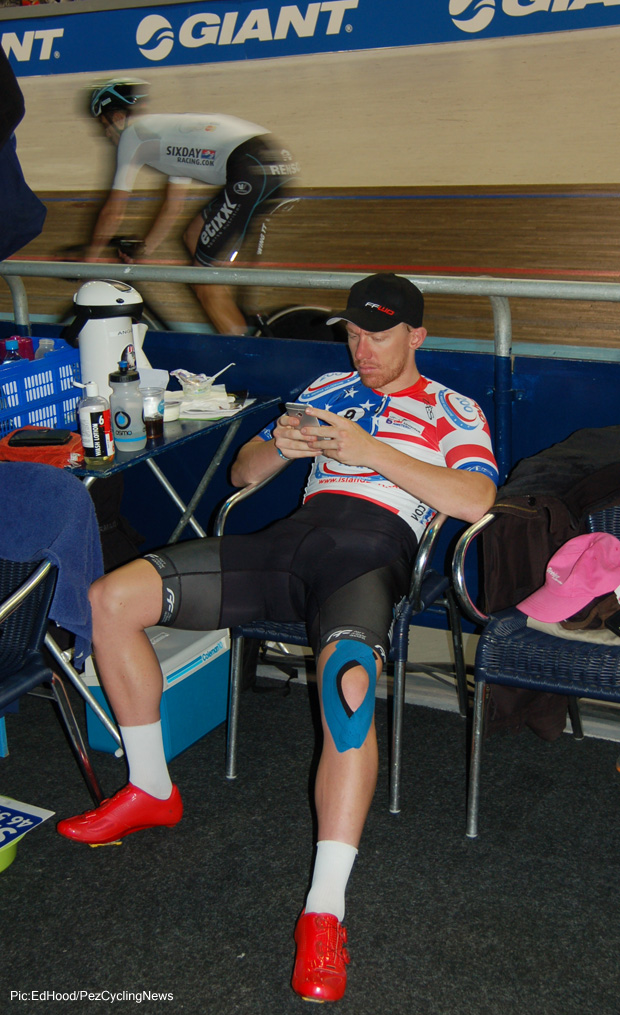 “I want to be relaxed, have fun and not worry about whether or not I’ve done enough training”