Team Sky’s Geraint Thomas has left behind the valleys of Wales for the rolling countryside of Tuscany – it’s obviously agreeing with him, witnessed by a string of strong performances in the recent Dauphine Libere. The tall man from Cardiff took time to talk to PEZ just 48 hours after what is his best pro road performance so far.

PEZ: Nice work in the Dauphine, Geraint and a great start with 4th in the prologue – a speciality for the future?
Definitely, I have the speed from riding individual and team pursuits and that ride has got me thinking that it’s something that in the future I may prepare specifically for; rather than just rolling up and jumping on my time trial bike. 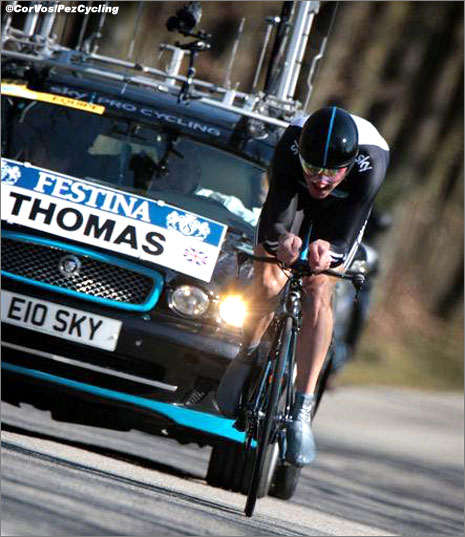 PEZ: ‘Geraint the sprinter’ on stages one (3rd) and two (9th).
The first stage went over a tough climb at the end and all of the ‘proper’ sprinters got shelled. I had a mechanical at the bottom of the climb – I unshipped my chain – and had to chase all the way up; that was disappointing, you can’t help but think how it would have gone if I’d been fresh, without that chase. Peter Kennaugh gave me a perfect lead out for it, too.

Stage two was a ‘proper’ bunch sprint, there was a headwind and I went a bit too early. But it was strange sprinting for myself, I’ve been so used to doing lead outs for other guys at Barloworld; Robbie Hunter and Enrico Gasparotto – It was good to have the team behind me.

PEZ: The stage three chrono and you were 7th.
I was surprised at that, I haven’t done many time trials over 20 K and to get that result over 49 K was satisfying, I think I paced myself well and because I was top ten I thought I would go for it. I know he’s not at full fitness but to finish within 10 seconds of Alberto Contador was very satisfying.

PEZ: Stage four, the first day in the mountains and you lost 2:51, maybe too much gas burned in the early stages?
Maybe, I felt a bit empty that day, it wasn’t that hard, there was a head wind but I didn’t have the best legs on that last big climb. 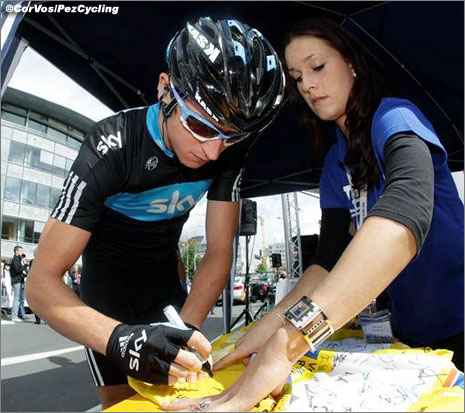 PEZ: Stage five, still in the hills and you went top 20.
There was a big climb then a big descent at the end; at the bottom of the climb I felt pretty ropey and considered just going into the gruppo – but I battled a bit and found that as I got higher on the climb I felt better; maybe it was because it got cooler as we got higher – coming from Wales, I’m not used to the heat.

PEZ: Stage six, l’Alpe d’Huez.
I took it pretty steady, we knew that Eddy (Boasson-Hagen) was going for the stage the next day and I’d have a job to do for him. Peter and I decided that we’d try and keep with the leaders as long as possible on the Glandon, that way we’d have time in the bank for l’Alpe and the time cut. As it happened there were only about 20 guys left at the top of the Glandon and we were still with them. Peter and I rode it at our own pace; it was great to ride up there, there’s all that history – Lance, Guerini and all the rest.

PEZ: A Sky win and another top 20 for you on stage seven.
I was surprised, I’d been racing hard all week and that finish circuit climb was tough, steep – but I managed to hold on to the front group and when it split it was just the top five guys on GC going up the road.

PEZ: Did you have to work hard for Boasson-Hagen’s win?
We had to bring back a big move then Peter and I had to cover the moves after that – but maybe I went with one too many. When the break went we could see that all that big teams were represented and we said to Eddy that if he had the legs then that was the move to be in – and of course, he went with it and won.

PEZ: You were 21st on GC at 11:50, with the benefit of hindsight, could that have been a top 20 finish?
We could have ridden l’Alpe two minutes faster, that’s for sure – but then maybe the next day I couldn’t have done my job for Eddy? When I look at it, I think the top ten is do-able. I’ve been steadily dropping weight, not at a crazy rate but sensibly and that helps so much in the mountains – my confidence has certainly received a boost.

PEZ: And Tuscany is home, now?
Yeah, it’s so much better for training with the good weather and the nice roads.

PEZ: Do you miss your Barloworld boss, Claudio Corti?
I got on well with him; and the two DS were good with me – we had a good little group of riders there; I enjoyed my time there and learned so much. 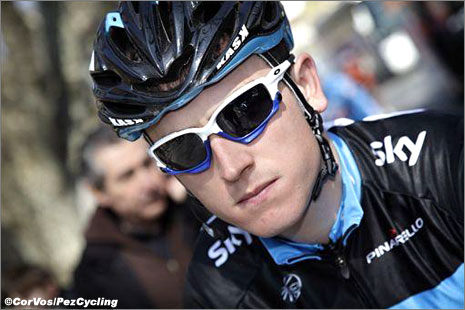 PEZ: Barlo/Sky, the main differences?
The support system around the riders, at Barloworld the budget was much smaller and they didn’t pay as much attention to aspects like nutrition during and after races as Sky do. At Barloworld it seemed like it was ‘just a job’ but at Sky there’s much more of the GB track team success mentality. At Sky they think so much more about things and do things differently – at Barloworld it was like; ‘well, it was good enough for Bugno, so why change it?’

PEZ: Do you miss the team pursuit?
I’m happy on the road but when I watched the track Worlds there was a bit of me wanted to be there – Ed Clancy is my best mate, we spent a lot of time together and I miss the friendship and team spirit there was on the squad. But the road is at a different level and it’s good to step away from the track to get hungry for it, again.

I’ll go back to the team pursuit for the London Olympics – to do the Olympics in your own country, it doesn’t get any bigger and I want to be part of that.

PEZ: How different is your training, now?
It’s all really miles and climbing threshold work – the first block of team pursuit endurance training was similar but of course now I don’t do the short stuff or practice standings starts; that has meant that I’m losing upper body weight which obviously helps on the climbs.

PEZ: Do you still have a coach?
Yeah, Dan Hunt from the track team – we discuss what I want to do, sort out a plan and get on with it.

PEZ: Tell us about marginal gains – will you be getting an electric motor?
Yeah, yeah! I’ve not seen the video so don’t know what to make of it. Seriously, it’s all about looking for as many fractions of percentage gains as you can – recovery drinks, nutrition, rehydration, aerodynamics, psychology and all the rest; when you add them all up it does count. 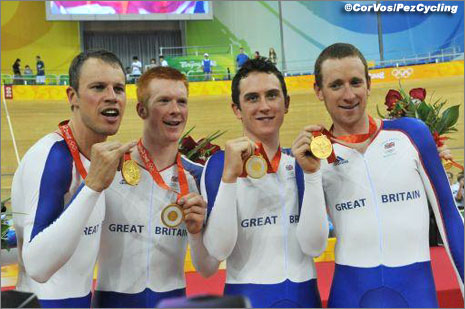 PEZ: And will we be able to pester you at the Tour?
The team is being announced after the Tour de Suisse but I’ve been talking regularly to Shane Sutton and David Brailsford and I think I’ll be there. It’s what my year is all about – it’s all geared around the Tour.

***
With thanks and congratulations to Geraint on a great ride in the Dauphine; we look forward to his carrying that form into le Tour.