When Cofidis slid from Pro Tour to Pro Continental, they shed a few riders; it looked like it was the end of his pro career for Alex Blain. Enter Brian Smith and Endura – followed by some strong performances from the man from the South. He spoke exclusively to PEZ after his excellent ride in the Tour of Murcia.

PEZ: How are you coping with the Scottish accents?
I’m learning every day! I learned English with French teachers who I think didn’t have good English accents; and I practiced the language in the US; now you understand my difficulties with Scottish accents! But I think you must have more problems if I start to speak Nicois! So no worries, by the summer I’ll be used to Scots! 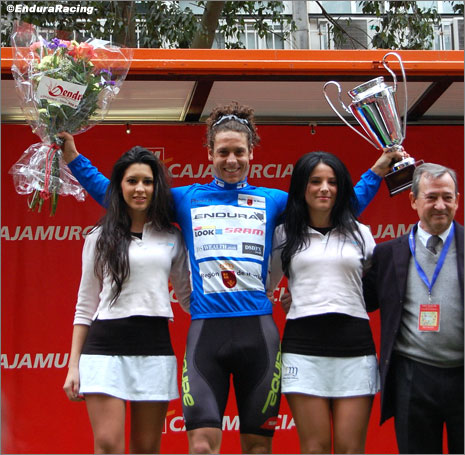 Alex on the final podium at the Vuelta Murcia in the Meta Volante jersey.

PEZ: Tell us a little about your amateur career, please.
I started road cycling in 2004 with Haribo/Aix en Provence DN1 French elite team. I learned all I need to become a good road cyclist and to be professional. It was a very good team who offered me many opportunities in the European Continental Tour. I won many races with this team but 2007 was my best season with seven wins (five in Continental Tour races), it’s what helped me to join Cofidis in 2008.

PEZ: You turned pro with Cofidis quite late.
Before road cycling, I was a MTB rider (cross country between 1998 to 2003 and downhill between 1996 to 1998) and before that I was a skier and track and field athlete. So I hadn’t a traditional background for a professional cyclist and I turned to it later. I also studied in sports and physiology at university to obtain a master 2 in physical preparation for high level athletes in 2003. 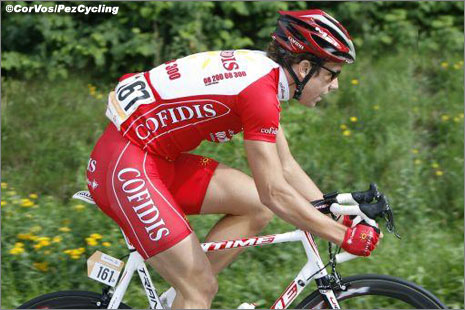 PEZ: Describe yourself as a rider.
I’m a determined rider; I think “if I want, I can”. So my head is my best quality – because I never die. I can come back, even when you forget me! I’m a massive rider, 187cm & 80kg – strong, fast, ever aggressive to catch the first group, so perfect for Flandrian races. I think I have all the qualities to hope to win Paris-Roubaix; if I can practice more on the pave; but I’ve no chances to win a grand tour GC!

PEZ: Were you surprised not to be retained by Cofidis?
For sure! With all I did for the team during two years, it was a big surprise. I rode every time, every race for my teammates and for the team and when I had a little bit of opportunity I tried to make the most of it for a good result. But I didn’t win with the Cofidis jersey and my relationships with the calendar races manager was so bad that the collaboration couldn’t continue! 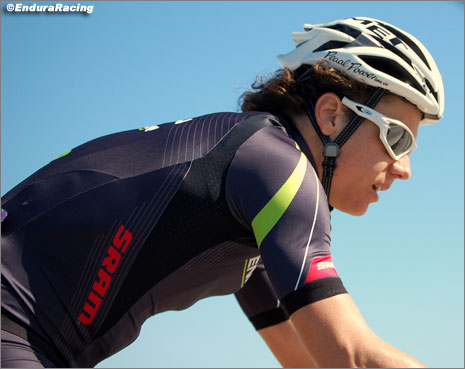 PEZ: Did you think that maybe your pro career was over?
I think it’s a comeback for me, with new people who want to help me and work from the ground up with me. I restart my career with new goals and with people who trust in me and try to do their best for me. I’m like a newborn today!

PEZ: How did you get the Endura ride?
Through a friend of Stephen Roche. After, the link was completed between Stephen, Brian Smith and Jim McFarlane at the end of December.

No, seriously, I like the respect there is between staff and riders in UK teams. When you are rider in UK you feel important.

In French team if you’re not a leader, you’re a “shit” Also, in France when the team wants something, managers wait a long time to hand over money or the things you need.

In Anglo-Saxon culture, when you want something, you do your best! And for a guy like me it’s what I need! 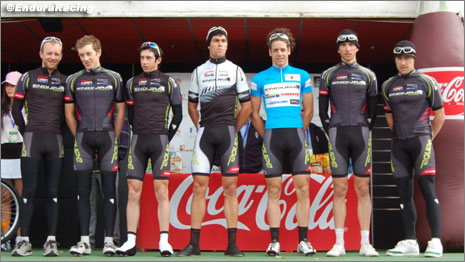 Endura has ridden splendidly so far in 2010 – there’s no reason to think that the momentum won’t continue.

PEZ: You must be disappointed that you lost two good opportunities during the Tour of the Med (directed off course when in winning split and race shortened by weather)
Sure, I trained very hard to be in good form for this race because it was at home. I wanted to show for my first race I wasn’t dead and when you’re unlucky it’s frustrating. But it was a good learning experience for the next race.

PEZ: A good opening day in Murcia. (He took, and eventually won, the Meta Volante jersey)
Yes, very good. I tried every day to catch the escape since the beginning of the season. And in Murcia, after two big professional races, I was in good form to do great things. So I did all I can to show the Endura jersey the first day and days after. When you do a good first day and keep a leader’s jersey in stages race, you’re more focused and determined. My first day in Murcia was the start point of my very good week in this race.

PEZ: Do you feel you have a point to prove to Cofidis?
No, I’m not interested about what Cofidis think. I’m just focused on Endura. And I just want to know what my team thinks about me and my job. After that, if I can prove to Cofidis that they were wrong, it will be a great satisfaction. But with my first results and all the press around me these last weeks, I think I’ve done that!

PEZ: Your first time on SRAM?
SRAM is a very nice system. I like it; it’s light, precise, pretty and ergonomic. I just hope they are going to create an eleven speed; I’ve ridden with Campagnolo 11 last year and for training in the Nice area, 11-25 is more comfortable than 11-23. 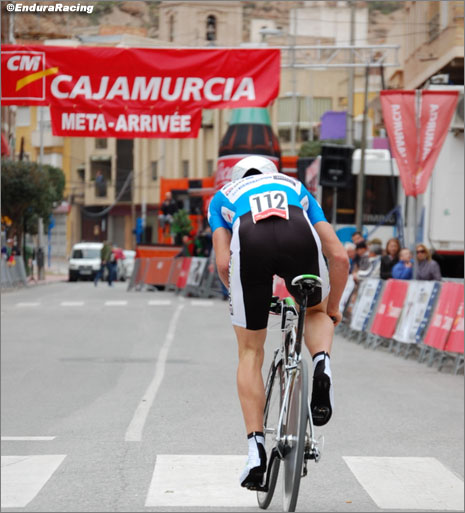 PEZ: How does the Endura clothing compare to the Cofidis kit?
Endura have many different products. More than we had with Cofidis and the Nalini bike clothes – Endura are very technical clothes. It’s nice and I feel very comfortable in the bib short and race jersey. Even the jersey is made with special coolmax, I just hope the black color isn’t going to be too hot under the Cote d’Azur sun.

Also, Endura ask us to choose between different products and it’s nice to be able to feedback on our feelings on clothes. The products for rain are very impressive; I think you can swim with them! Finally, for presentations and all day clothes, Endura gave us very nice pants, shirts, jackets, beanie… There are technical too, like trail or running clothes; and on this point, it’s very much better than you can have with Cofidis.

PEZ: I believe you’ve negotiated the team into other races?
Yes, I tried to link my French contacts with Rob Hayles and Jim McFarlane. I have opportunities to help the team to race into the French Cup and other beautiful stages races 2.1 or 2.2. The problem is that the Premier Calendar and the Tour Series program clashes for many races. But I think if we want to access to the Continental Pro level, we need to race more in France, Spain, Belgium or other countries where we can race in 1.1 and 2.1 events on the European tour.

PEZ: Have you ever raced in the UK?
Never; The Tour Doon Haem will be my first UK race.

PEZ: Your goals for 2010?
I’m very focused for Tro-Bro Lйon and CiCLE Classic. But I want to win or help my teammates to win every time I can. I want to do my best every day on every stage on every race to show the Endura jersey and give to the team all the results we need to catch sponsors, organisers and UCI attention.

***
In a world of one dimensional stars, Endura have got a real character there – like we said to Jim McFarlane; ‘you’ve won a watch with Blain !’ With thanks to Alex and Endura PR, Martin Steele for their time and effort.

FOOTNOTE: Marlene has asked me to point out that it’s a Celtic culture he’s now part of: not Anglo-Saxon (it’s tough having two editors).