Rider Interview: One of the most surprising signings of the 2012/13 transfer season was the move from the US amateur team Californian Giant to mighty WorldTour outfit Astana by 22 year-old Evan Huffman from Elk Grove, California. Ed Hood caught up with him for a chat about the past and the future.

Huffman produced some startling time trial results in 2012, beating the likes of Tom Zirbel in the McLane Pacific stage race TT and then besting Rory Sutherland at the Tour of Gila TT before taking the US U23 TT title. Californian Giant and Astana share the same bike sponsor in Specialized, who spotted Huffman’s potential and recommended him to the Kazakh squad.

His first result of note came in 2008 when he won the US national junior road race title and by 2011 had made the podium of the national U23 road race championship – before his breakthrough season in 2012. Huffman spent two seasons with the Kazakh team which is home to Tour winner Vincenzo Nibali and Giro and Vuelta star, Fabio Aru; but for 2015 Huffman is back in the USA riding for Team SmartStop.

He kindly agreed to fill us in on his adventure with the boys in baby blue and his plans for the future.

PEZ: Thank you for giving us this interview, Evan: 42 race days in 2014 with Astana but much of that early, TDU/Dubai/Qatar/Oman – was it enough and were the races right for you?
I definitely would have preferred to race more. I’d also like to have done more European stage races like the Tours of Romandie or Suisse. I did do some races I really liked though and I think doing some that didn’t suit me wasn’t the worst thing. I just need to take the good out of those experiences and use it to work on my weaknesses. 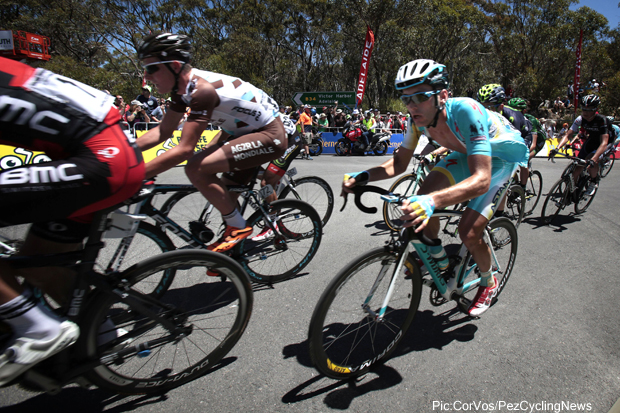 Evan Huffman in the early season action Down Under

PEZ: There were 48 race days in 2013, including Beijing – was that a better programme?
It was actually a very similar program. The main difference was that I started and finished a little later, but I did a lot of the same races.

PEZ: When the team knows they’re not renewing you does that mean you race less?
It can, but I don’t think that was the case with me since I didn’t race much the final part of 2013 either. 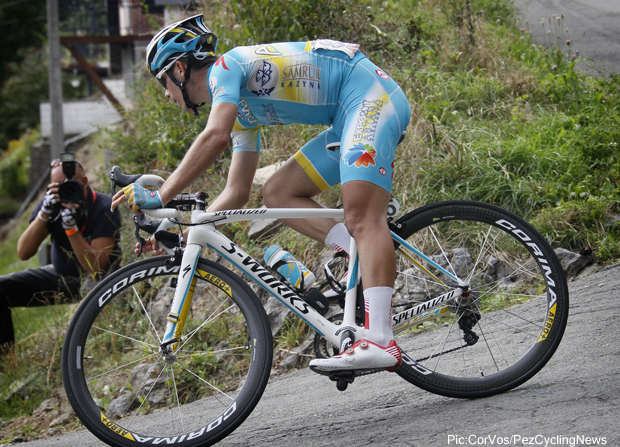 PEZ: Astana is a big team with lots of ‘stars’ it must have been difficult to find room to express yourself on the bike?
It was, but I think that can be said of any World Tour team and is just part of the sport. It would have been nice to have a little different race program, but I can’t complain because I did get to do some great races and learn from some of the best riders in the world.

PEZ: Any comment on their current woes?
I can only speak for myself and my experience and that was that Astana is a clean team and they’re really trying to do everything the right way. I never saw or heard anything suspicious in my time there so I think the guys that tested positive were almost certainly acting on their own.

PEZ: What’s Vino really like?
I’ve only spoken with him a few times, but I think he’s a really nice guy. He was always very encouraging of me at races.

PEZ: Which rides with the team are you happiest with?
One day that really sticks out for me is Stage 6 of the Eneco Tour 2013. I got in the break which was really hard, but then even later when I was eventually dropped I recovered and helped Grivko when his group caught me and he ended up 3rd on GC.

From 2014, Stage 4 of Tour of Oman when I was in the break most of the stage. That was another one that didn’t yield a result for me, but I’m happy because it was a really tough break to get into and I made it really deep into the race with some strong riders. 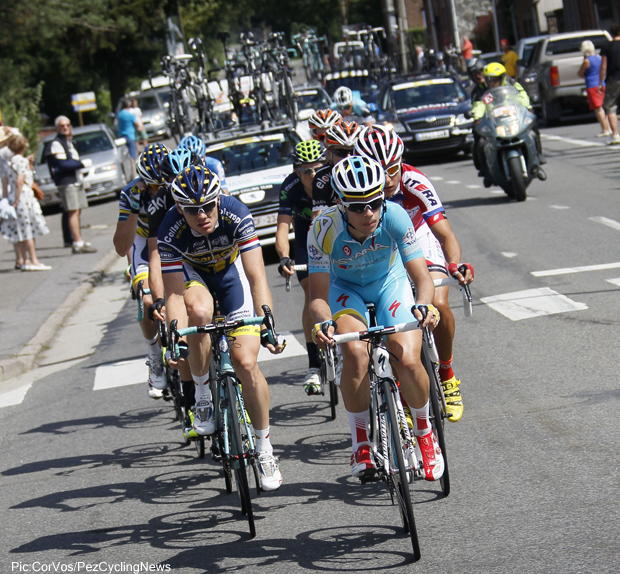 Powering the break on stage 6 of the Eneco Tour’13

PEZ: Any ‘dark days?’
I had a lot of really dark days. I think I made some mistakes with the way I split my time between the US and Europe. I spent a lot of time alone in Girona feeling lonely and depressed. But I have no regrets because I learned a lot and it’s made me a better person and rider. There were a lot of really good days as well.

PEZ: You must be a stronger rider now after training and racing at World Tour level?
Definitely. I broke almost all of my power records over the last two years. I plan to work really hard this winter and be even stronger still in 2015. The biggest factor will be using that power effectively at the key moments in races and translating it into big results.

PEZ: Will you miss Girona?
Ultimately, no. There may be certain things I miss, but it pales in comparison to how homesick and lonely I was a lot of the time over there. At least for now I’m just really happy to be back in California. Plus, I know I’ll probably have the opportunity to go back there again.

PEZ: Why Team SmartStop; tell us a little about the team and it’s plans, please – do they have any Euro adventures on the agenda?
I choose SmartStop because I think their fantastic 2014 will open doors for even more success next year. They’ve brought on Omer Kem as a manager which will free up Mike Creed to be an even better director. They’ve both expressed a lot of belief in me and the entire roster so I think it’s going to be the perfect environment to reach my potential. I don’t think there are plans to race in Europe, but there will be at least a couple races in South America or Asia. 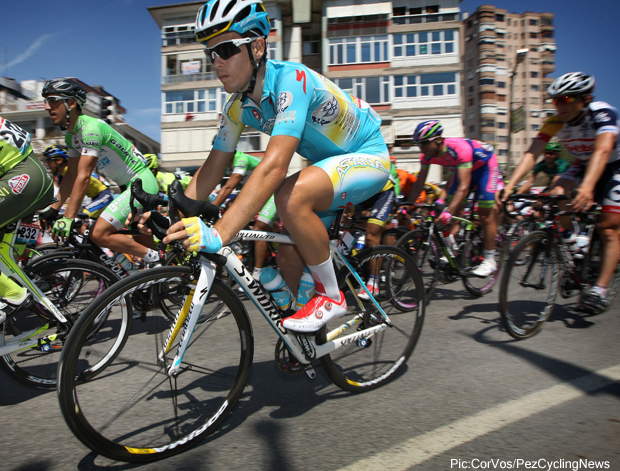 The Tour of Turkey’13

PEZ: Have you discussed your programme yet?
A little bit. It will be a very North American focus with my main objectives the biggest races – California, Utah and Colorado. Other than that I’m sure I will do most of the other UCI and NRC events.

PEZ: Did you not want to try to remain in Europe?
I did try, but it just wasn’t possible given the current market and my lack of results the last 2 years. I was disappointed at first, but I think it’s a blessing in disguise and SmartStop is exactly where I’m meant to be right now.

PEZ: What are you looking forward to most about living and racing in the USA again?
I’m really looking forward to spending more time with friends and family and having a little more of a “normal life” this winter. Once the season starts it will be great to be back in the peloton with all the guys I grew up racing with. 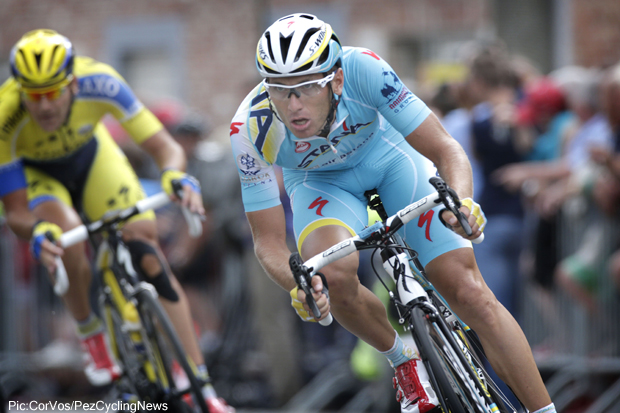 PEZ: Will you miss riding Paris-Roubaix, again?
I’ll miss the spectacle and fanfare around it, but not the race itself. I don’t think it’s one that really suits me.

PEZ: Season 2015 will be a good one, if . . .
I can finish every race satisfied that I did the best I could. My big goals are to win the TT at National Championships, finish on the GC podium at a 2.HC race, and win the GC of at least one other stage race. 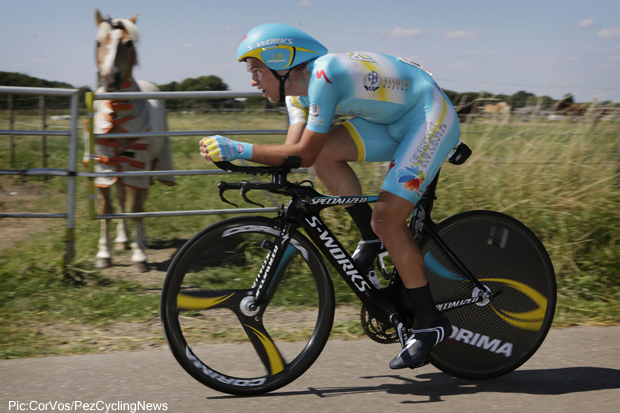