Cervelo’s Dan Fleeman left it late to take his first win of the year; but it took him just 3 minutes 18 seconds to convert late season road form to victory in the most specialist and punishing of races – the British Hill Climb Championship, on the 1100 metre Pea Royd Lane climb near Sheffield, England on Sunday.

Against a field of specialist climbers, whose whole season centres around a few weekends in October, Fleeman was in a class of his own – relegating last year’s champion Matt Clinton into second spot by a yawning margin of 14 seconds.

World Hour Record holder, Chris Boardman, is a previous winner and so is ex-Teka pro Darryl Webster, in a race where UCI rules do not apply and the real serious weight savers saw off the bottom part of their handlebars – from the brake levers down – and ride an adapted track bike with single fixed wheel and one brake. There was no such finessing for Fleeman, who used his training bike – a Cervelo S2 – to take the national champion’s jersey. Pez was on hand to talk to the new champion, soon after his ride.

PEZ: Congratulations, Dan – when was the last time you won a British championship?
Dan: The Espoirs road champs, back in 2004. 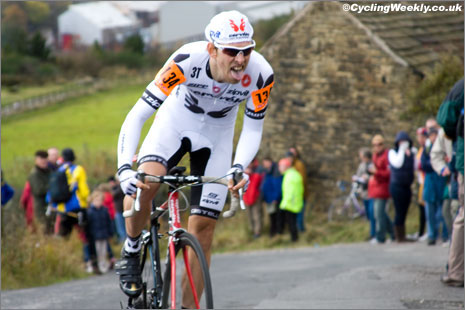 PEZ: You really had to win today, a pro against the specialists?
Dan: Yeah, I entered three or four weeks ago; it’s a race I’ve always wanted to ride, but I’ve never managed to fit into my programme, before. After Lombardy last Saturday, when we were on the Cervelo team bus, the guys were having a beer and a pizza and I thought; ‘why have I entered that hill climb!?’ But I watched my diet and didn’t pig out or have a beer. In the week I was thinking; ‘I have to win this or I’m going to look foolish!’ I was in my buddy’s bike shop on Wednesday and he asked me how I thought it would go, I said; ‘I’ll win by five seconds,’ he was like; ‘yeah, right!’ But I actually won by three times that much!

PEZ: I believe you had a little bit of doubt about your entry getting accepted?
Dan: They get so many entries for the race that you have to have ridden qualifying climbs within the last 12 months so as they can seed the field. My last hill climbs were in 2007 so I phoned the organiser; he said that my win last year in the Tour of the Pyrenees would do fine!

PEZ: Lombardy last Saturday, then what?
Dan: I did 15 minutes each way to a mate’s house on Sunday; nothing on Monday and Tuesday; 90 minutes easy on Wednesday; nothing on Thursday; 90 minutes easy on Friday and another two 15 minute rides yesterday. I figured that I had to be fresh for it; there were guys doing intervals on turbos before the start – some of the lads who rode have been riding four of these events – Saturday and Sunday morning and afternoons – for the last couple of weekends, they’ll be burnt out! When I gave my victory speech, I said that next year they should spend more time sitting on the sofa, it may have sounded smart, but it was just simple advice!

PEZ: Did you ‘try the hill out?’
Dan: I was going to, a mate was to drive me out on Wednesday, for a look, but it didn’t come off, I figured it was only three minutes and I could see all I had to on the morning. I walked it on the morning and had a good look at it; there were a couple of corners where it helped to have worked your line out. I felt that if I rode it on the morning, I’d be wasting energy – on a hill like that, it’s not as if you can ride up slowly, that just makes it seem harder and that can crack you mentally. And I only did an eight minute warm up! 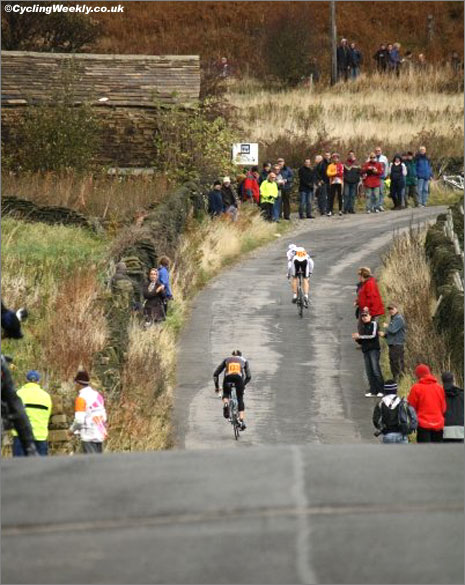 PEZ: Was there a game plan?
Dan: I had this grand idea of setting off and keeping my power output at a steady rate all the way; it’s easy to go off too fast and blow, when I walked the climb, there were guys almost coming to a halt on the steep part, near the top. But when the guy said; ‘Go!’ the plan went out the window and I just nailed it as if my life depended upon it; the adrenalin just got the better of me! My wattage for the first half was 700 and then 400 for the second half, but the first part was into the wind, then there was a following wind to finish. I was six seconds up on Matt Clinton at half way but felt that maybe I’d lost that advantage over the second half – but actually, I’d put another eight seconds into him.

PEZ: Tell us a little about the hill.
Dan: It was around 1100 metres with stretches of 20% gradient; there was a video of the course on YouTube, which showed pot holes and rough surface, but I didn’t notice, The gradient did alter though and so did the wind direction, I actually made quite a few gear changes – the specialist guys on a fixed gear obviously couldn’t do that.

PEZ: Was there a good crowd?
Dan: Yeah, it was a good atmosphere and my mum and dad were on the course supporting me.

PEZ: Have you ridden hill climbs before?
Dan: I won the Catford and Bec hill climbs down in the south of England, back in 2007, they have big money prizes on offer – this is my third, so I have a 100% record! 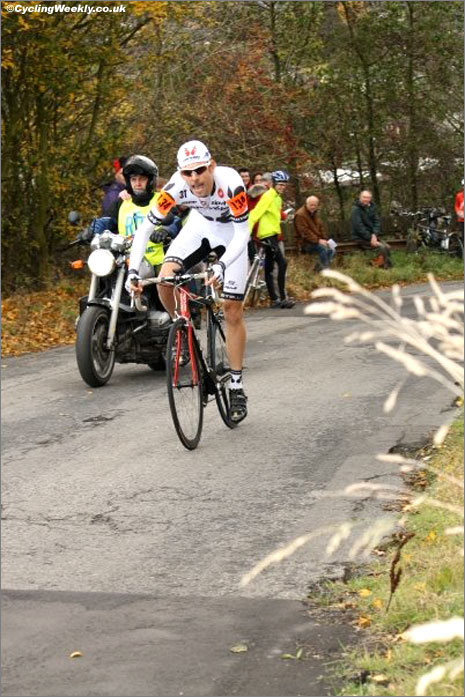 PEZ: You just rode your usual bike?
Dan: Yeah, my training bike, it’s an S2 – what used to be the ‘Soloist – it has aluminium bars and stem, on my race bike there’s all the carbon stuff.

PEZ: How was recovery, after an effort like that?
Dan: It was still steep after the line, so two guys grabbed you, I think that in some cases it was a good job they were there as guys would just have fallen over. But I’d have preferred to just ride through the line and ‘ride down’ on the bike. Going from a massive effort like that to a dead stop is weird, my body was like it was frozen and I had a blinding head ache for about an hour after the race – I was in a state! 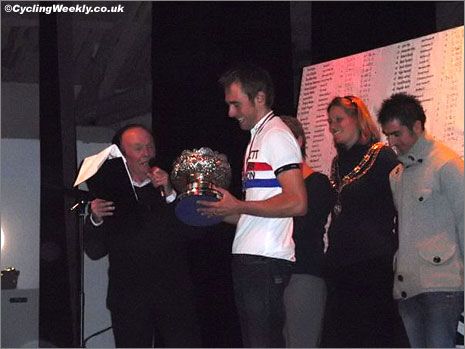 PEZ: What were the prizes like?
Dan: I got a national champion’s jersey, a big trophy and a medal – I’m not sure about money – I get presented with them formally at the governing body’s (Cycling Time Trials) dinner in January. It’s my Cervelo team mate, Dan Lloyd who is guest of honour – he’s told me that; ‘he’s not giving me anything!’ 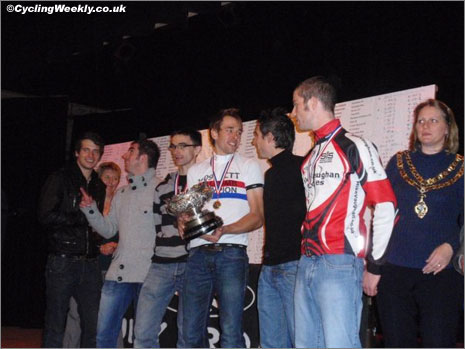 PEZ: Holiday now?
Dan: Yeah, some red wine tonight, then five days with Dan Lloyd in Bournemouth; five days in Rome and three days in Bath. Then I’d better think about next season!

***
Silver medallist and defeated champion, Matt Clinton asked our boy about the differences between riding Lombardy and the Hill Climb Champs; “about 154 miles!”