One of the animators of the recent Valkenburg World Elite Road Race Championship was Garmin’s neo-pro 24 year-old Alex Howes. The young man who hails from Golden, Colorado was also one of the surprises of the second half of the Classics season.

Howes exploded on to the scene with a top six finish behind Europcar’s ‘Tommy’ Voeckler in a miserable Brabantse Pijl back in the spring.

And to prove it was no fluke, just days later he was one of the animators in Sunday’s Amstel Gold Race; riding hard in the breakaway for some 215 kilometres, impressing on the climbs near the finish and still finding enough left to hang on for 30th place. An unfortunate training crash compromised the summer for him, but he was back in fine form for Limburg. 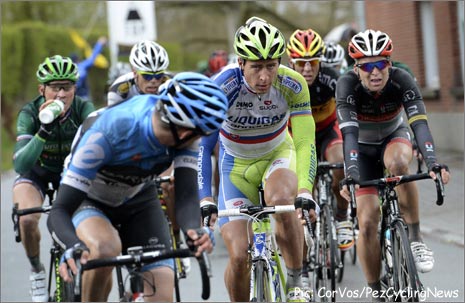 ‘Ok, so just a few nobodys on my wheel – time to attack again!’

Howes has been under Jonathan Vaughters’ wing in his various development squads since 2007 – taking a year out to ride for top French amateur club, VC La Pomme, Marseille during season 2008.

His career path is one of steady progress. Howes’ first result of note was third in the US debutants cyclo-cross championship in 2004. He was also second in the novice’s road race the same year – beaten by a certain Tejay Van Garderen.

In 2005 he was second in the US junior cyclo-cross championship and for season 2007 he signed with Vaughters. 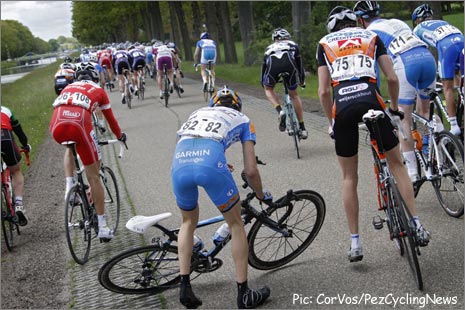 There’s been a few downs in Howes’ career so far but mostly it’s been a steady rise to the big leagues.

By 2009 he’d graduated to US U23 road race champion, taken a stage in the Tour of Utah and finished fourth overall behind Francisco Mancebo.

A year later he was runner-up in the U23 road race championships behind Ben King and was 20th overall in Canada’s tough Tour de Beauce.

Last year the-then Chipotle Sugar Labs rider showed strongly in stage races; with fourth overall placings in the Tours of the Gila in the US and Beauce – plus 13th overall finish in Tour of Langkawi.

This season is his first with the WorldTour Garmin-Sharp Barracuda squad, and he’s shown that he has considerable potential, endorsed by events in the Worlds where he was off the front for some 130 kilometres.

PEZ: That was a nasty crash back in July, what happened and what were your injuries, Alex?

I was doing some motor pacing at the ScratchLabs camp with Phinney and a few others and I got tangled up with the scooter and came down hard.

We were moving at a decent click and I got whipped down and shattered my collarbone. I broke it in seven pieces and had some nasty road rash to go with it.

PEZ: How has recovery gone?

The recovery went perfectly. I had surgery the night of the crash and I was back on the trainer after only 3 days.

The team medical staff kept a close eye on me and I was able to see the team chiropractor three times a week to speed things along. At this point it’s pretty much 100%.

The only thing I still struggle with is carrying a back pack but I suppose that is to be expected when there are 10 screws just below the pack straps! 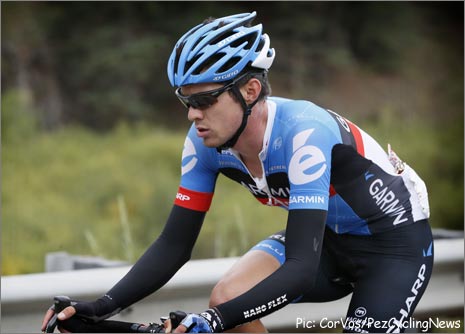 Back to full fitness now and looking good. Just don’t ask Alex to carry your backpack!

PEZ: How did the crash affect your programme?

To be honest the crash didn’t affect my program too much. I missed Elk Grove but I was able to still do Utah and Colorado. It was unfortunate that I wasn’t able to be 100% at those races because of my injury and recovery but given the situation I did as well if not better than anyone could have hoped.

PEZ: Wasn’t it quite stressful riding the two Canadian races prior to the Worlds?

I was happy to do the races in Canada. After nearly two months at altitude it was beneficial to do some high intensity racing at sea level before the Worlds. Not to mention I love that part of the world and those circuits, particularly the one in Quebec, suits me quite well.

PEZ: What was the US Worlds game plan?

We wanted to be aggressive and race it in a similar fashion to the way the US team raced the Olympics.

We put two of us up the road early and had plans to launch other riders later. Unfortunately those plans were derailed by some crashes and other issues.

PEZ: How many kilometres were you ‘up the road?’ 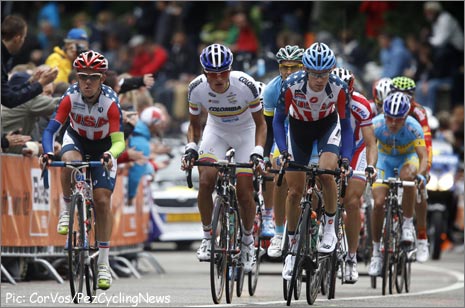 Off the front at the Worlds here with teammate Timmy Duggan

PEZ: It must have made life a little better having Timmy in the move with you ?

Having Timmy in the move with me was great. We came up through the Slipstream Sports organization at the same time.

He’s a few years older than me and someone whom I’ve looked up to ever since joining the program. To have him in the break with me, supporting and encouraging me was very special. He has always been a very classy and crafty rider and you can be sure I was taking notes watching him ride in the break that day.

PEZ: Had you ridden the Cauberg before the race?

We did it a few times in training the days leading up to the race. And I also raced up it a couple of times in Amstel, of course. 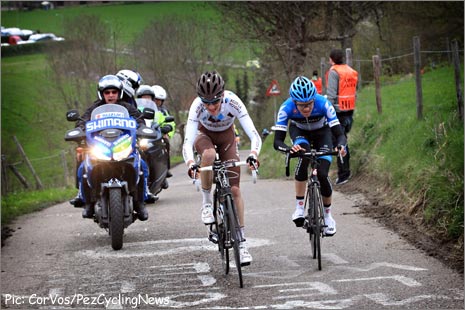 Alex familiarised himself with the hills in the Netherlands in the best possible way earlier this year with a monster long break in the Amstel Gold race.

PEZ: What was it like hitting the climb for the first time, with that huge crowd?

The Worlds is always a special event and this year certainly didn’t disappoint. The crowds were massive not just on the Cauberg but around the whole circuit.

Both climbs had massive parties going with plenty of Amstel flowing. Hitting the Cauberg the first time was pretty surreal. I remember seeing flags from all over the world, people with painted faces, names of the sports heroes on the road, and feeling the passion and excitement from the crowd. It was a rare perfect moment.

PEZ: Did you think that when the Cummings group came up it may be possible to stay clear?

When the large group of favourites came up I did indeed think it was possible to stay clear. I was keeping an eye on the big screens around the course and saw that only Belgium was chasing and at that time they did not look overwhelmingly powerful.

Spain was driving the break and looking strong. The Netherlands and France had options up there as well. I liked my chances for a decent placing as well. Timmy had given me the opportunity to relax a bit in the break and with none of our hitters up in the move I was free to sit on and see how things played out. 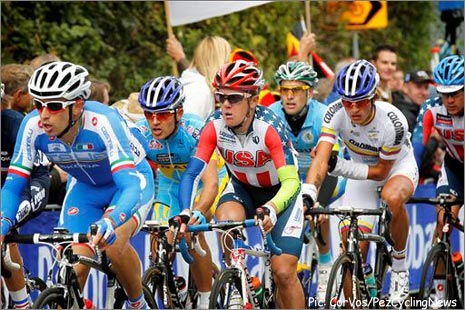 PEZ: What did you think of the circuit?

I thought it was a good circuit. They could have made it much more technical but I think they did a good job of making a pretty safe yet exciting circuit.

It had a little bit of everything as a worlds course should and up until three kilometres from the finish the race was wide open.

PEZ: How does the elite Worlds compare to the U23 version?

Definitely a lot harder! It’s the big show – THE world championships and the top step.

Racing worlds as a U23 was always fun and a priority but everyone in that race is racing with the hope of moving on to bigger and better things. With the hope of turning pro and hopefully racing the big races like worlds.

In the elite race guys are racing for one thing: the title of being THE world champion; becoming the best rider in the world on that day. The difference in the two different motivations is very noticeable while racing.


PEZ: Were you happy with your race?

I just got home from Lombardia early this morning (like 2am early!) and I’ll have a couple of days in Girona before heading to China for the Tour of Beijing.

I have five more days of racing until the end of my season.

PEZ: Will you spend the winter in Girona?

Nope, I head back to Colorado after Beijing and spend the winter there. When the weather goes bad I’ll head south then probably head back to Europe mid February

PEZ: Will you change your training approach this winter, given your strong showing on the spring cobbles ?

I don’t foresee any major changes. At this point I have a pretty good idea of what works and what does not.

It is all about figuring out the details now. Small changes here and there and trying to find little things that help me do the most important part of my training: riding my bike a lot. 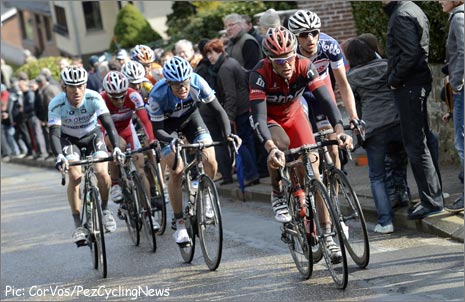 In the moves again, this time at Brabantse Pijl

I still need to speak to the team about that but if I have my way I will do a Grand Tour. I think it is pretty clear I need to get the ball rolling on the Grand Tours in order to keep improving. It is hard to compete in 260km races against seasoned pros with 10 or 20 Grand Tours in their legs.

The endurance and experience gained is invaluable and there really is no substitute.