The last time we spoke to Garmin’s Steve Cozza was after the 2008 Paris – Tours; where he produced another solid performance from a consistent and promising year. But the 2009 season wasn’t a good one for the Californian; we caught up with him at his Girona summer base, just after he had returned from the Garmin camp in Calpe, to discuss his hopes for 2010.

PEZ: How was the winter?
Steve: The winter was good, I was training in California and the weather was fine. October I mostly rested, but during November and December I built up the miles. My girlfriend, Jen moved from Georgia to be with me, so that was pretty cool.

PEZ: Have you thought about spending the winter in Girona?
Steve: I’ve thought about it and I think I probably will, in the future. I had health problems last year; after the Tour of Missouri we decided to end the season early, rest, then start to train sooner, rather than later. I had stomach problems which turned out to be irritable bowel syndrome – so no more dairy or wheat products for me. 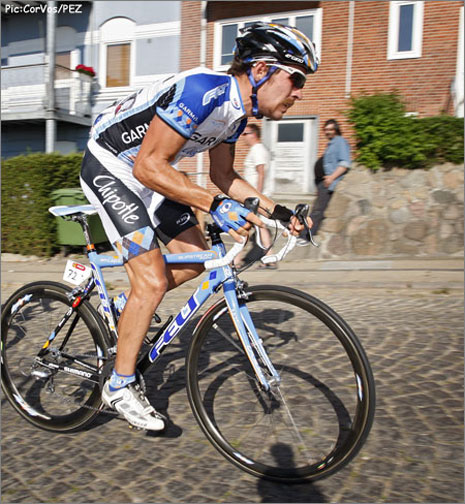 PEZ: Did you do any of that shark fishing over the winter?
Steve: Yeah, I took some friends out shark fishing and we went trout fishing in the Sierras, that was cool.

I did a few charity rides over the winter, too – it’s fun to give your time and help.

PEZ: Were there any high spots in 2009?
Steve: Not really, it was a quiet year, I was pretty sick for the whole season and couldn’t develop any power. But every year is a new year and I learned some lessons in 2009 – never give up, keep training, keep trying. I’ll be taking that new mental strength with me into 2010. 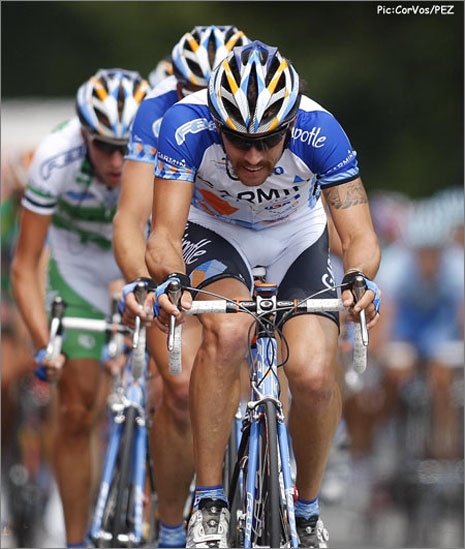 A healthy Cozza is a force in any bike race: a big, powerful engine.

PEZ: Did Bradley jumping ship affect team morale?
Steve: It’s tough because he was a good team mate and we’ll miss him; but it was his decision – I can’t judge him on what he did, I haven’t been in that position.

Morale in the team is great, we have a strong roster; we have GC riders, classics guys, climbers, time triallists and sprinters – we’re not a one sided squad.

PEZ: Will there be a Garmin v. Sky niggle?
Steve: I don’t think so, we’re going out to win, so it’s not just Sky we have to worry about – we have to be competitive against all of the rival teams.

PEZ: How was the training camp?
Steve: We had a two week camp at Calpe. We good some good rides in – it was excellent training. We also met up with our new sponsors, Transitions – they told us all about their lenses and glasses. Their lenses react to the conditions; they’ll change with the weather – you only need one set of lenses, that’s so cool! 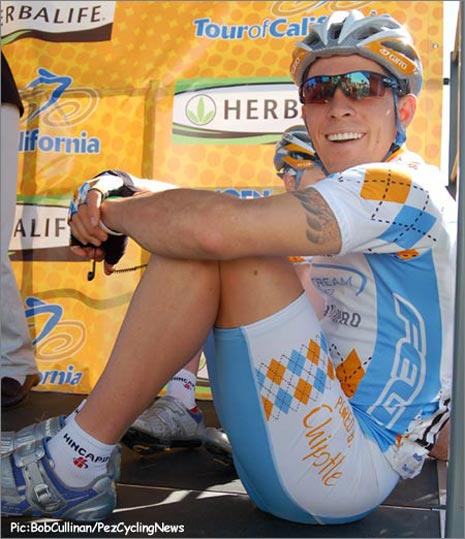 A happy Cozza back in the early days of Slipstream. That wasn’t all that long ago.

PEZ: How’s Tyler Farrar?
Steve: He’s definitely in good form already; he’s looking for a stage win at Qatar. There’s an opening team time trial there, so if we can put up a strong ride in that, we can set him up for the overall, if he gets stage wins.

PEZ: Will Christian Vandevelde ride the Giro as Tour prep?
Steve: I don’t think that Christian will ride the Giro, it clashes with the Tour of California and that’s a big objective for us.

PEZ: What’s your programme like?
Steve: Qatar, Oman, Het Volk – then the Italian stuff; Eroika, Tirreno, Milan – San Remo. Then I’m back to Belgium for all the major Northern Classics. 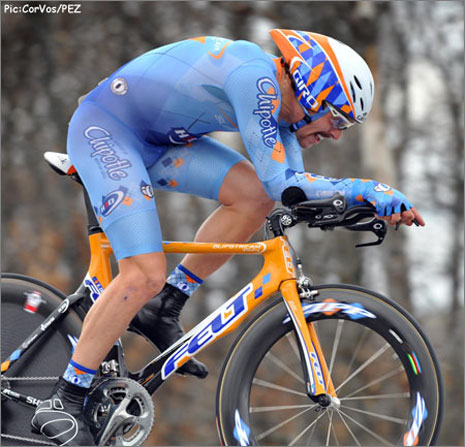 Cozza is a fast man on a TT bike.

PEZ: New Felt TT bikes, I hear?
Steve: They’re really nice; Felt have always been one of the most aero TT bikes around and this year we have Mavic as a sponsor so they’re even better. We tried them out at Calpe but I’m looking forward to racing on mine.

PEZ: What are you looking forward to most about 2010?
Steve: The Belgian classics, particularly Paris – Roubaix and the Tour of Flanders – they’re my favourite races. We have Martijn Maaskant and Johan Van Summeren, I want to be good for them, but also able to take my own opportunities if they arise.

I’m also looking forward to seeing how my new website stevencozza.com works out – my dad has done a pile of work on it. Fans can sign up, make a donation and they’ll get an autographed card from me – but they’ll also put themselves in line to win cool prizes; autographed team jerseys and stuff like that. All the proceeds from the site go to disadvantaged kids.

PEZ: 2010 will be a success, if . . .
Steve: If I’m consistent, like I was in 2008. I have big ambitions, I want to be a top rider and play a strong supporting role for teammates like Martijn. But I want at least one pro win, this year – and I want to be good in the Eroica, I love racing over those dirt roads!

***
The man sounds ‘full of it’ as we say in Scotland (that’s a positive comment in Scotland, not like in America) – we wish him all the best for 2010 and we’ll try not to leave it for a year until we catch up with him next time.