By Edmond Hood On Nov 19, 2012
Share
Like PEZ? Why not subscribe to our weekly newsletter to receive updates and reminders on what's cool in road cycling?

We’re unabashed Giro fans here at PEZ and love everything about the race with organisers RCS having a real history of being innovative. Even we were surprised though to hear an English commentator at the start/finish line this year. PEZ tracked down the man behind the microphone, Anthony McCrossan to find out more.

The Tour may be the number one race in the world, but the Giro is gaining ground.

Having changed the management team and decided that ever more brutal parcours are not the way forward, the ‘Pink Race’ has been busy embracing new ideas – like asking for the tifosi’s opinion on the percorso and having a ‘cook off’ at the race presentation for the ‘Bigs’, rather than the ‘same old, same old’ dull speeches.

But perhaps the biggest step they’ve taken is to accept that English is now the international language of cycling – unthinkable in France.

This year they took the innovative step of having an English ‘speaker’ at the start and finish of four key stages.

Englishman Anthony McCrossan was the man chosen for this honour and here at PEZ – as long time Giro lovers – we thought we best get the low down on this ground breaking initiative. 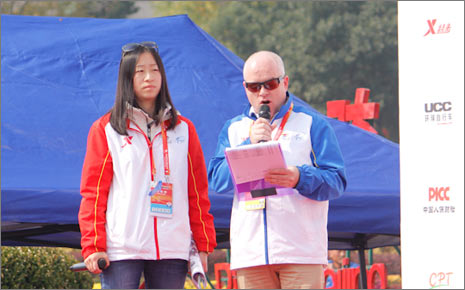 PEZ: Thank you for speaking to us, Anthony – let’s go back to the start, how did get into cycling commentary?

It’s funny you should ask me that!

Just the other day I had a phone call from the chap who used to sponsor Velo Club Venta – that was the cycling club where my dad was chairman for a few years and I was a member – he heard me commentating at the Olympics and rang to remind me about my first commentary job.

VC Venta organised a decent criterium in Winchester city centre in the 90’s and at the last minute the guy who was supposed to commentate had an; ‘I can’t do this!’ moment.

I stepped in and did the needful. After I realised that I wasn’t going to be a pro cyclist, commentating was the direction I moved in.

I moved up from local races to national races and eventually Eurosport. Our old sponsor reminded me that it was a long way from the roof of a double glazing van in Winchester to the ‘Pringle’ velodrome at the London Olympics! 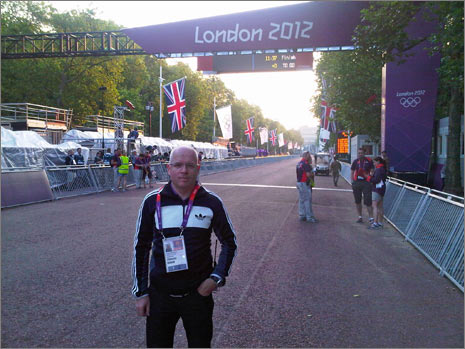 PEZ: Tell us about your role at the Giro, please.

I’m honoured to be able to say that I was the first ever English language commentator at Milan-Sanremo, the Giro and Lombardia.

It was prescient because Simon Gerrans won in Sanremo and Ryder Hesjedal won the Giro. They chose four key stages to trial it at the Giro, including the TTT and final stage.

At the start it’s the same job as Daniel Mangeas does at the Tour, introducing the riders at the sign-on. And at the finish I provided commentary for the crowd watching the last 40 K on the big screen.

The Giro organisers are intent on globalising their race; they know that there will be a lot of English speaking fans there for Cav – who the Italians love – and North American fans for Garmin and Ryder. It was ground breaking stuff.

PEZ: How did you get the gig?

It’s a little bit of a roundabout story. I was ‘speaker’ at the 2011 Tour of Beijing for the starts and finishes – with a simultaneous Chinese translation.

It was John Herety who put a word in for me – for which I’m grateful. Anyway, every day this guy was coming up to me and saying; ‘good job, well done!’

I didn’t know who he was – but it transpires he was Michele Acquarone, the Giro organiser. He said to me at the end of Beijing; ‘I love what you’re doing, will you come to Milan-Sanremo, the Giro and Lombardia?’ 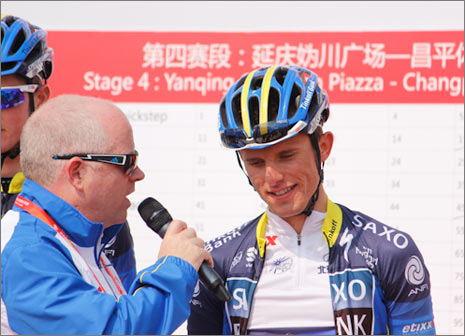 Anthony’s ‘good job’ here in Beijing got him the Giro gig.

PEZ: Tell us about a typical Giro day.

We arrived there late the night before; up early and over breakfast discuss the plans for the day with the Italian commentary team.

Then meet the event producer to discuss the choreography of the day. At the start do interviews, talk about the route, the riders and introduce the jerseys – and the trophy.

The jersey and trophy presentation are always made by very pretty girls, of course . . . 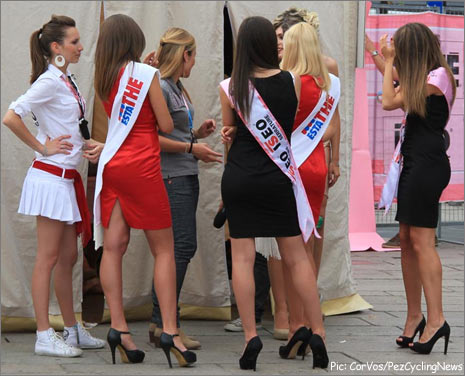 As the race start approaches ‘big up’ the stage and then head for the commentary box; which is tiny – and hectic.

As the finale approaches the deejay works with us on the music – and then it’s time for the final presentations.

To do all that in English is a massive step forward in term of globalising the race.

PEZ: How do you deal with those dreaded sprinters’ stages where the suicide break is away all day then gets caught with five K to go?

I did the Tours of Qatar and Oman where nothing much happens – so I know what you mean. And I did the Vuelta for ITV4 . . .

Those are the days where your preparation comes to fruition – I spend a lot of time on the route and the history of the stage.

For example I’ll check out on PEZ and other sites for any interesting information; look at what’s on Twitter and talk to the riders the night before, taking notes and looking for interesting stuff to talk about – information that you’re not going to get anywhere else.

PEZ: Those are the stages where Dave Duffield used to talk about the menu from the night before.

I did the Dauphine with Dave – I think it was one of his last races – and I have to tell you that he did so much research and had the most comprehensive notes with him, he took the job very seriously.

PEZ: Are there ‘Golden Rules’ of commentary?

Try and think about what the fans want; and remember that you’re not the race, the riders are the race – they’re what it’s all about.

Very briefly – but it’s an interesting and very beautiful route and I can see why Bradley Wiggins wants to ride it.

I’d love to see him ride it – I know he likes to set himself targets and the Giro would be a good one. And I think that the percorso reflects that the organisation has been listening to the Tifosi about that they want.

PEZ: Do you still work for Cycling TV?

Not so much, they’ve been quieter this year – but I did do E3 and Dwars Door for them.

PEZ: What does a road race commentator do in the winter?

I’m doing a lot of track commentary, the Glasgow World Cup and the Worlds in Minsk, for example.

And the Revolutions at Manchester as well as the Rapha ‘Super X’ cyclo-cross – I’m pretty busy!

PEZ: Is a commentator allowed to have favourite riders?

I don’t think you should have favourites, but you get to be excited.

There are definitely guys who you have an affinity with, you talk to them, get to know them . . .

And when certain riders come to the fore you know it’s going to be a key moment in the race – Cav’s train leading him out; Gilbert attacking at a crucial moment and in ladies’ racing approaching a climb, you just know that Emma Pooley is going to attack.

I think that as a commentator your job is to excite, inform and bring the event to life. 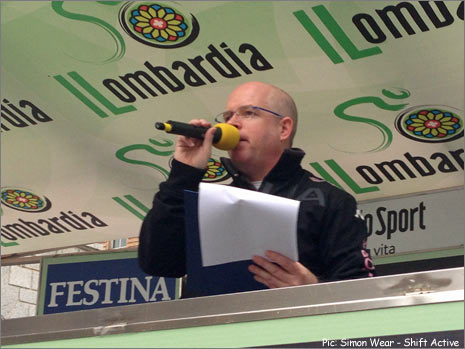 Anthony working at the Giro di Lombardia this year.

I’ve worked on Qatar, Oman and Beijing and I totally understand the reasons for it – it’s no bad thing, introducing and promoting the sport in new countries and markets.

But the riders have to be properly looked after and the ‘new’ money has to find its way back to the teams. As for acceptance and enthusiasm for the race, I can already see the changes in attitude in Beijing.

PEZ: And the UCI points debate?

You get riders like Matt Brammeier and Dan Lloyd who ride their hearts out for their team but don’t have a big points total at the end of the year and therefore struggle for a contract.

I think that when the UCI set the system up, they didn’t foresee this situation.

It has to be looked at quickly otherwise the dynamic of pro racing will chance – domestiques are going to ask; ‘why should I ride like this if I’m going to be out of a job at the end of the year?’

I’ve been asked that so many times. For all those who love cycling, especially those who held him as a hero, it’s just so sad.

It hurt the sport, let the fans down and to see those results and history erased after the fans worshipped him, again, so sad.

I read Tyler Hamilton’s book and thought; ‘well maybe this has a skew to it.’ But when it really hit me was when I read the riders’ affidavits from the Usada report; that’s when it became clear what had been going on – I read them all, but David Zabriskie’s in particular had an effect upon me.

People say to me that it was a great day when Lance was brought down, it wasn’t – it was a horrible day.

PEZ: What would you do to tighten up on the drug cheats?

I’d definitely increase the length of the bans – two years isn’t enough. I’d make it four years; that would make it much harder for them to get their careers back on track – and for the second offence, I’d make it life.

# Let’s hope so; with thanks to Anthony for his time and insights. #