Haynes came late to sport but has been racing and winning in the Flanders since 2003.

In the last decade the 37 year-old Haynes has ridden for the DFL, Cyclingnews, Maestro and Jartazi pro teams, but more recently with solid Belgian amateur and Continental teams such as Yawadoo and Colba-Mercury.

It was with Jartazi that he scored his biggest result – the British Elite road race championship in 2006, outsprinting Roger Hammond and Geraint Thomas to take the title.

But he’s had big wins on the continent too; take Renningelst, which he won in 2008; it has the likes of Iljo Keisse, Jez Hunt and Erik Dekker on its role of honour. 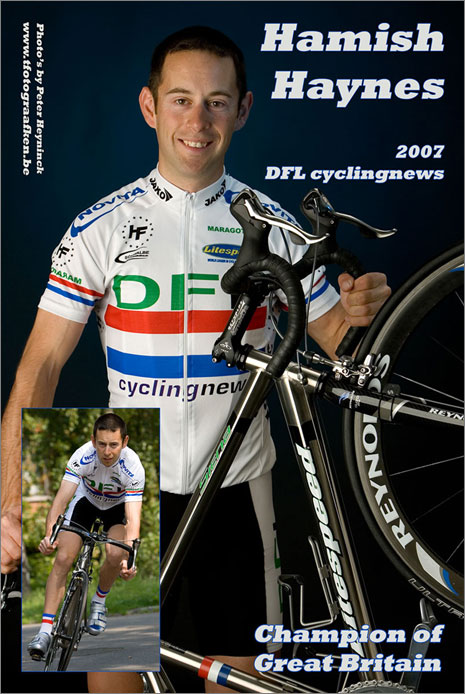 In 2010 he won the big ‘inter-club’ at Nieuwkerken and grabbed a host of good placings to boot.

For 2011 he was with Belgian Continental team Colba Mercury and won in Buggenhout, not to mention 4th in Ruddervoorde, 5th in Westrozebeke and 6th in the Kampioenschap van het Waasland.

As anyone who knows the sport will tell you, it’s very difficult to win or place highly in Belgian races; rival teams are well organised – and so are the ‘combines,’ where riders work across team boundaries on the basis of finance/friendship/reciprocated favours. 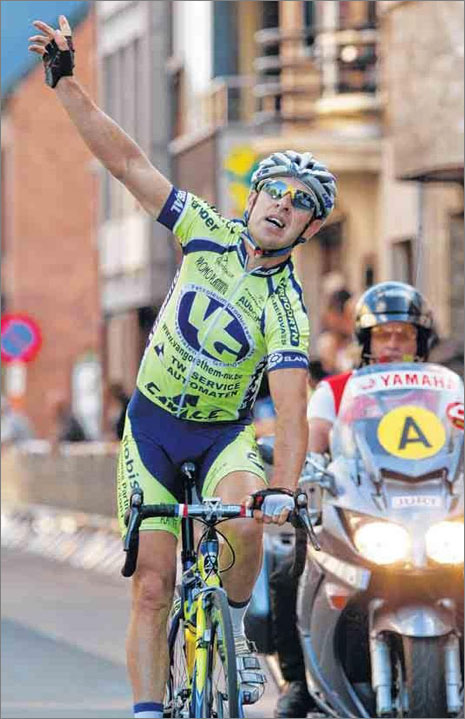 Haynes never moans; he just gets on with it – no matter how low the funds are, or how bad the crash is he always looks to the positive.

He spent a few days in Edinburgh with us once, a year or two ago; it was an education . . .

It was late when Hamish arrived at the door; to get him to his Irish race on time, he had to fly in from Belgium on Tuesday night, spend Wednesday and Thursday with us, and then head off to the Emerald Isle early on Friday. 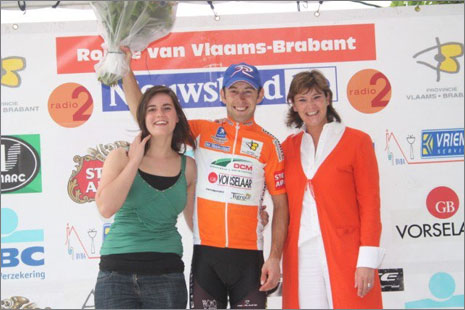 He was dressed every inch the pro – fleece hat, big anorak, fleece top, Craft polo neck under vest, and track suit bottoms over long johns – just like Sean Kelly; always be cosy, look after those muscles.

It’s just a pity that muesli eating isn’t an Olympic sport; David Brailsford would have him on The Plan in a trice – a week’s worth of the crunchy stuff lasts him one day.

There’s very little fat allowed in the diet – plenty of protein, though.

No tea, coffee, fizzy drinks or alcohol, either.

Hamish was a vegetarian, then a vegan in earlier days, but when he was exposed to the realities of pro team life in Flanders, he realised that starvation was a real possibility and has suspended his vegetarianism until his cycling career ends. 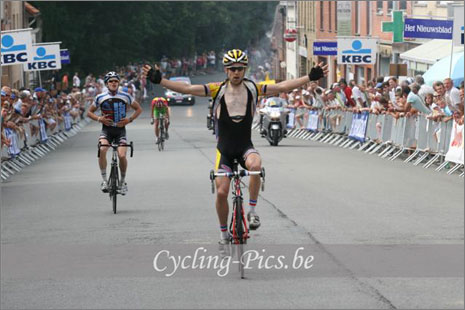 As with all other aspects of his life, nothing is left to chance diet-wise; on Thursday night, before he was heading off to Ireland in the morning, a concoction of couscous, tuna and Branston pickle had to be batched; ‘just in case.’

The Irish guy he shares accommodation with in Belgium had bought Hamish a little box of four Ferrero Rocher for his birthday a month earlier; Hamish made a deal with himself that he would only eat one after a race which he thought he’d performed well in – there was still one in the box.

He does 45 minutes stretching every day; the routine involves a hard foam roller and tennis ball to work deep into the muscles.

His new digs didn’t have TV yet but it wasn’t a problem because it stopped him from getting distracted and gave him more time for said sadomasochistic stretching rituals.

He carries a spray of ‘Vanish’ with him for washing his shorts so as there no possibility of them not coming out of the washing machine in pristine condition.

He did a wash in our machine and stuck in a load of our clothes, so as not waste water.

He did a couple of runs up into East Lothian and the bike was a little dirty – not on Friday morning though, shining like a new pin, and the tyres had been off because he’d ridden through a flood; ‘the water gets into the rims.’

On Friday morning when it was time to go, there was nothing left to chance, as well as the ’emergency’ rations, there was the ’emergency bag’ for the neutral service car – with a full complement of cosy gear in case anything went wrong; ‘a cracked bike and you can’t go on, so you don’t want to catch pneumonia!’

I remember thinking that if I was starting a pro team and wanted a real pro to mentor the youngsters – I know who I’d be giving a ring. 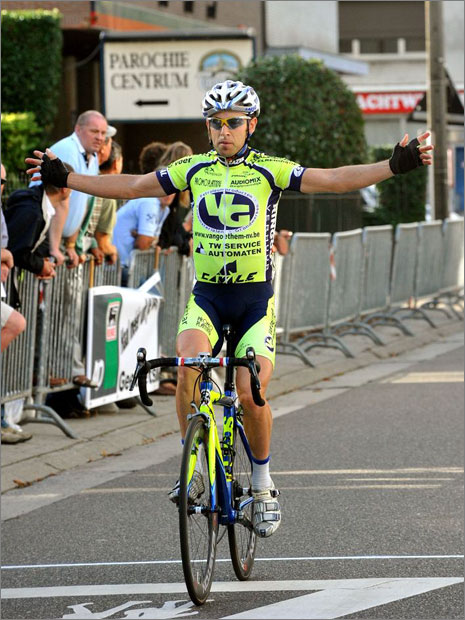 For season 2012 he stays with Colba, but Mercury is no longer the co-sponsor – ironically for a man who’ll revert to his vegetarian lifestyle once his racing career is at an end – it’s Superano Ham.

He’s fulsome in his praise of manager, Peter Bauwens; ‘I’ve ridden with Peter’s teams for a few years now.

He always puts a good team and programme together – I’m really looking forward to the season and racing with the guys who’ve stayed and getting to know the new guys.’

But Hamish isn’t your usual cyclist, smart phones and iPods have little place in his life, he’s a thinking man, committed to his principles and very different to many young riders who think that the world revolves around them.

For season 2012 he’s decided that he wants to publicize the charity ‘War on Want.’

Here’s what he has to say about his decision:

‘This year I’m going to promote the charity via my racing, on my website and other publicity where possible. And perhaps I might attract features here and there on the internet.

To that end I’ve now got some kit featuring the War on Want logo to wear whilst racing. I have to say a big ‘thank you’ to Jim and Alan at Endura clothing, who very generously made it all up for me. Without any bias I can say I’m very pleased with it; it’s good quality gear. 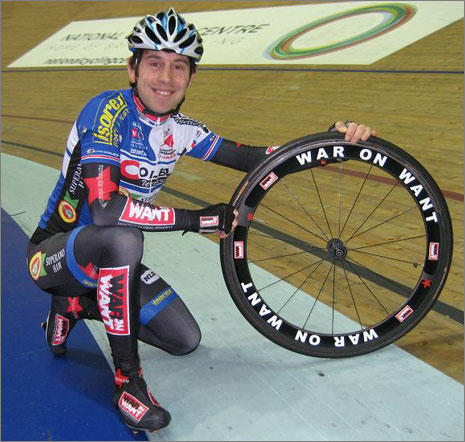 Aside: What Is War On Want?
“War on Want fights poverty in developing countries in partnership with people affected by globalisation. We campaign for human rights and against the root causes of global poverty, inequality and injustice.

Poverty is political. The decisions of politicians in rich countries can mean life or death for people in developing countries. We have the power to reshape the global landscape – to ensure that people across the world can live in justice and peace.

War on Want works with some of the bravest and most inspiring groups in the world. In rural communities, in factories and sweatshops, in conflict zones and on the margins of society, we work with people fighting for real, lasting change.”

Back To Hamish
Obviously there are restrictions as to what I can wear – Endura have made arm and leg warmers, gloves and overshoes.

I’ve also got equipment decals and, again I have to say thanks to John and Jodie at JLS embroidery, they’ve been a great help’

So what’s the plan and why is he doing it?

‘Well, for my own part I’m going to donate 5% of my share of prize money this season.

I’d love to have said more but, anyone who knows me will tell you how tight I am, or poor, or both!

I had to make a promise I could keep – 5% of my prizes doesn’t add up to a huge amount, I know. 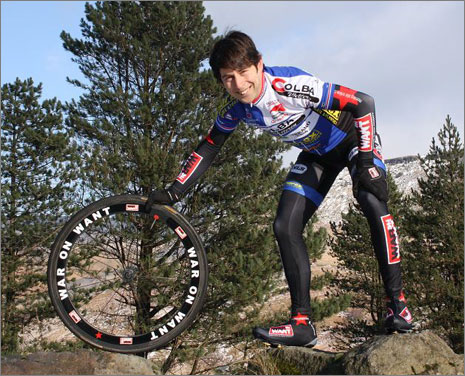 However, maybe you, as one of the many thousands reading this, might want to donate now and then, according to my performances – 10 Dollars/Pounds/Euros for a win down to one for 10th?

Divide by ten if you like, it all counts.

Naturally a 5th place in a big event can be as significant as several wins in smaller races.

Of course there are many worthy charities and many of us are going through tough financial times.

So perhaps just as important is to do my bit to raise awareness for War on Want and the people they work with in their fight against their own and/or other’s poverty.

In this I’m just like any other War on Want supporter, I just have access to a bit of an unusual way of showing my support; push bike racing!

It’s important for me to stress that this isn’t an attempt to become a fleeting z-list ‘cycling celebrity,’ although I will have to try to get my visage on the internet and in print.

To be clear, no one is giving me anything to do this, it’s a voluntary effort.

For me it gives me a more balanced expression, beyond being an athlete; it points in the direction that I may want to go when I stop racing.

I’m also confident that racing for War on Want is going to sharpen my cutting edge.

As I’ve said before, though I may only race for two more seasons I aim to make them my best.

Roll on the first races!’ 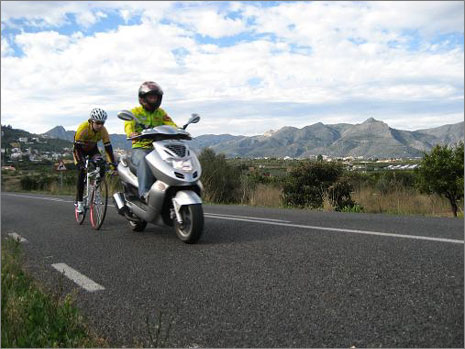 ***
Like I said, the man isn’t your average cyclist, if you’d like to help out with donations to the charity or just follow his progress as he goes toe to toe with the Boonens and Gilberts of this world, check out www.Hamish-Haynes.com

For more information on War on Want – head to: www.WarOnWant.org