As the 2014/15 cyclo-cross season is about to wind up, Ed Hood quizzes the British National cyclo-cross champion, Ian Field, on his season and the state of the muddy winter sport. This past season has been one of the best with the emergence of a new young guard and Ian gives us the inside line on everything cross.

There was a seismic shift in the ‘cross world last weekend in Tabor as the ‘new wave’ of riders swept the board at the UCi Elite World Cyclo-Cross Championships; the precocious Dutchman with the best possible genes – Adrie van der Poel as his dad and Raymond Poulidor as his granddad – Mathieu van der Poel took gold from Belgiums’s Wout Van Aert with another man from the land of polders, Laars van der Haar in third spot. The gold and silver medal winners could both have ridden the under-23 race whilst van der Haar is only one year out of that category.

As you’d expect, PEZ had a man right there in the action, British Champion, Ian Field (Hargroves Cycles) who narrowly missed a top 20 spot. Field spoke to us upon his return from historic Tabor and we opened by asking him about what looked like a very tricky parcours . . .

Ian Field: It was a tough race, the conditions were special with the course freezing hard over night when the temperature went down to minus three or four but then the top layer started to thaw about 11:00 am when the sun came started to warm the ground. What you had was a layer of 30/40mm of mud on top of ground that was still frozen solid – so there was nothing for your tyres to grip below the mud – and in the shade a lot of the ruts were still frozen solid. I rode Challenge full mud tubulars with 18 psi in the front and 17.5 Psi in the back – at my weight, when you get down below 20 psi, that’s pretty soft!

PEZ: How about logistics, getting all your gear to Tabor?
That wasn’t too bad, the weekend prior, after the World Cup race at Hoogerheide in Belgium (where van der Poel also won with Van Aert second, ed.) the GB team took all my equipment to Tabor whilst I went back to Britain to train for the week at my parents house in Kent and I flew out at the end of the week. British Cycling sometimes get criticism for not giving ‘cross enough support but the guys who are involved love the sport and are very, very good. 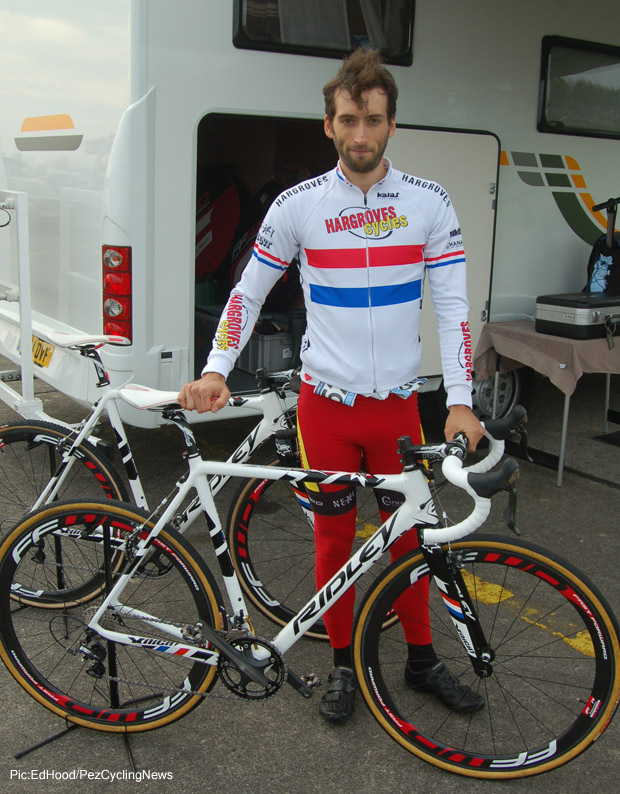 PEZ: What are the Czech fans like?
Good – they’re like a cross between Belgian and English fans; in the Milton Keynes World Cup race all the riders were cheered by the fans, even the guys down the field whilst the Belgians tend just to cheer the leaders at big decibels then wait in silence ‘til the top guys come around again. In Tabor they were cheering for everyone and it was a really nice atmosphere.

PEZ: You finished 21st – were you happy with that?
Well – on the last lap I was only five or six-seconds off the group going for 15th when I got a large lump of frozen mud in my eye, I lost concentration a little and stacked heavily. I finished one-second behind Francis Mourey (France) and four-seconds behind Rob Peeters (Belgium) so it was frustrating not cracking the top 20 . . . 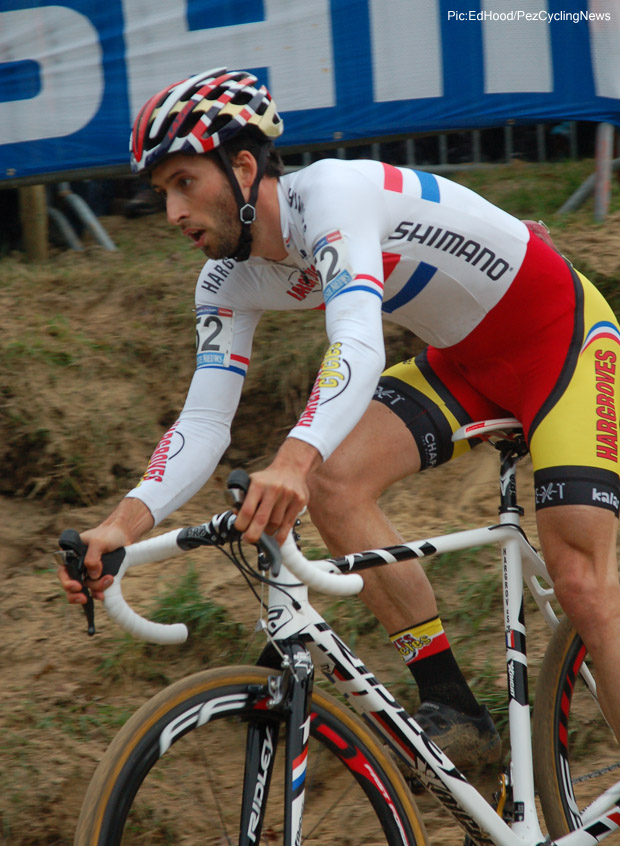 PEZ: There’s been much talk about Van Aert blowing the race by riding a new, untried machine . . .
All season he’s been on double chainrings but for this race I think SRAM wanted him to show off their single ring, one x 11 CX 1 set up, so he rode that for the first time – he’d trained on it but in the race he had problems with his chain coming off. I ride Shimano double rings, in the old days guys used to ride single but they came back to double – and that was for a reason. With a single ring you don’t have to change at the front but a front changer does keep the chain in place and for all the weight you save I’m sticking with two rings!

PEZ: Is there much more mud to plug, this season?
No, all done! In years past I’ve ridden to the end of February but I haven’t been offered any good money contracts between now and the end of the month and the races involve a lot of travel so I’m finished for the season. When I laid out my goals for the season, one of the things I decided was that I was only going to do the races I really wanted to do, the ones which motivated me. I’m not going to go through the motions in races that I’m not really motivated to ride. I’ll take four or five weeks off with at least a couple of those with no bike at all and the other couple just riding socially before I get back into training.

PEZ: Are you happy with season 2014/15?
I set myself six goals for this season; a top ten in the Koppenbergcross – I was 15th but had mechanicals; top 15 at the Milton Keynes World Cup – which I achieved with 12th; win the British Cross Series and Champs – I won both; to be more consistent – which I have been; and to be top 20 in the Worlds – which I just missed. So overall I can’t be unhappy. 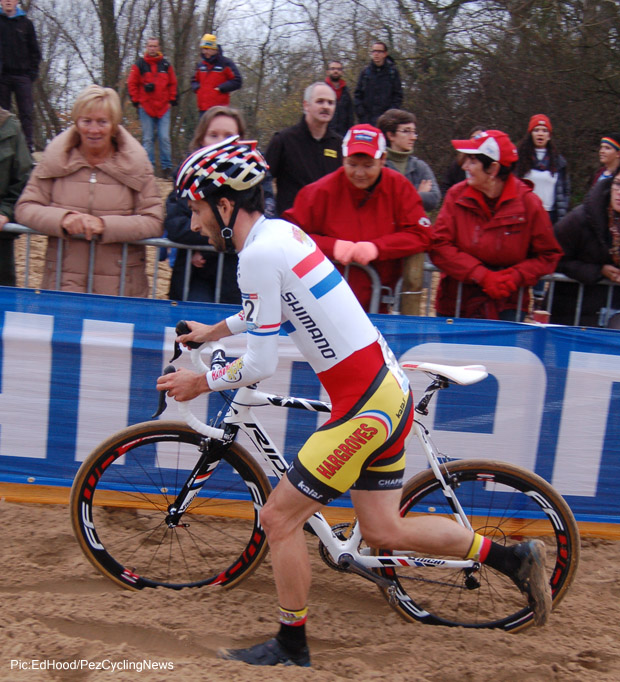 PEZ: And season 2015/16?
It’s an early start with Cross Vegas in September but also the new Montreal World Cup race, the same month. But that fits in with my earlier finish to the season – and I’ll be training again pretty hard, pretty soon.

PEZ: How do you stand in the World rankings?
I’m 27th on 500 points which equals my best ever points score but that year I’d been in the US for the early season – and no disrespect to US ‘cross but it’s easier to get points there than it is in Europe. I’m pleased that I am where I am totally on Euro racing. 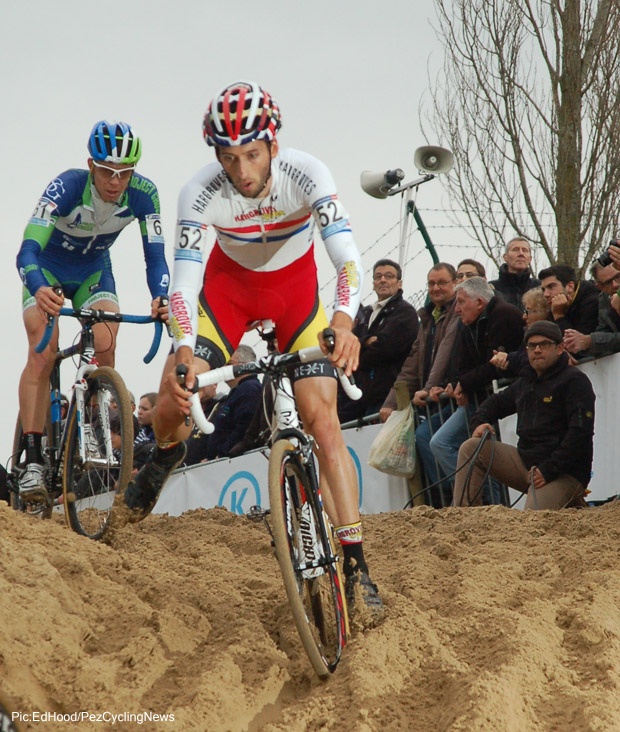 PEZ: And is it still as much of a buzz to win the British Championships for the fourth time?
Yeah, it’s still really special to be British Champion; and the pressure has eased now, when I was trying to win it for the first time but didn’t the pressure mounted – but now that’s less of a factor and I’m much more confident. 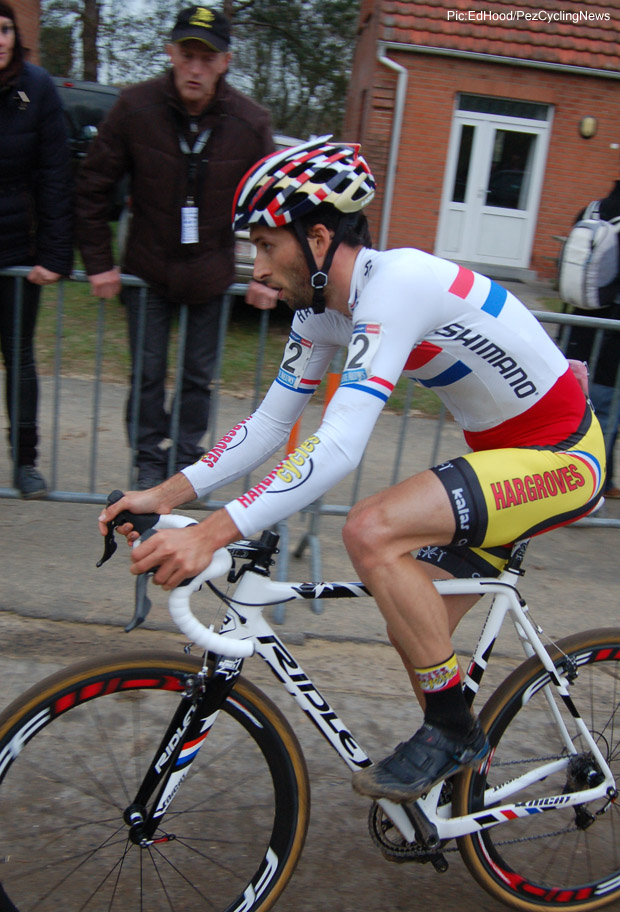 PEZ: And we’re in a new era for the sport.
Yes, the youngsters have certainly taken it to the older guys. In the U23 races we could see that the lap times were fast but the race was 20 minutes shorter – however what’s happened is that they’ve brought that speed across with them, it’s a new way of racing. Previously, we’d tear off for a lap then sit up and take stock, but now it’s racing as fast as you can from the gun and no easing up. But it’s great for the sport, new blood; Sven winning 20 races in a season was terrific for his fans but . . .

PEZ: Your hi-lite of the season?
That Milton Keynes World Cup race; I had a good result and seeing a World Cup in England with such a great crowd was just fantastic.

There was just so much hype from the other riders about that race – they loved it!

# It’s been a great cyclo-cross season, the best for years; we’re excited about Koksijde 2015 already! # 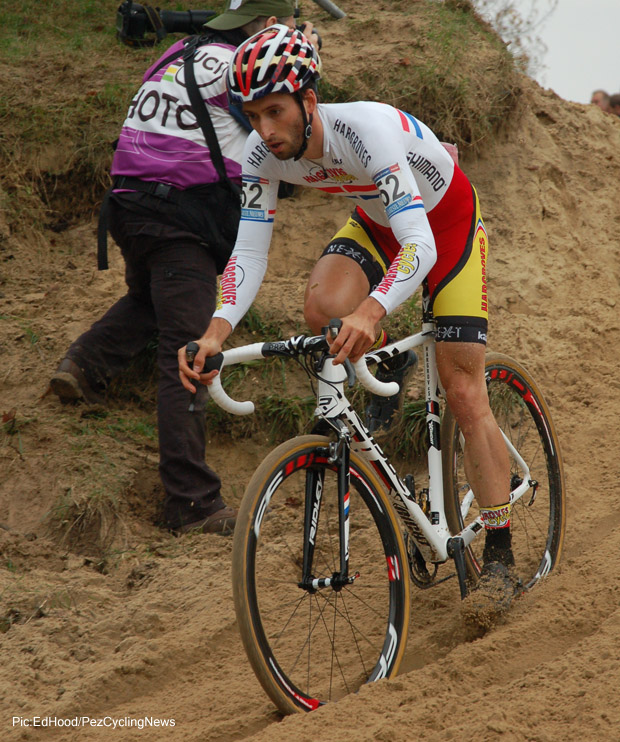