30-year-old Liguigas rider and law student, Manuel Quinziato, has rightfully earned himself a spot amongst the ever growing list Italian of hopefuls in the Northern Classics. Pippo, Ballan, and Quinziato have proven their class in Belgium as hard men capable of doing battle with the sport’s best. PEZ recently caught up with Quinziato as he readies for what will be an important 2010 season.

PEZ:You were at the head of affairs for awhile at the Tour of Flanders last year…What was that like?
It was good to be there. I think I did a very good race in one of the most important races of the year. It’s just a pity I didn’t finalize my statement at least with a podium. 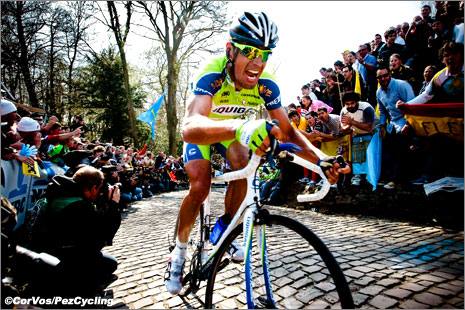 Quinziato fought courageously against Devolder’s onslaught, but couldn’t keep on terms with the Belgian.

PEZ: It was incredible to watch you on the Muur – you were on Devolder’s wheel when he attacked. What was that like? Any what ifs?
When Stijn reached me and Chavanel, it was already 60km that I was in the break. Anyway, I think he was the strongest in the race. When he attacked I gave all of myself to stay with him but I started to have cramps… Nothing to do! 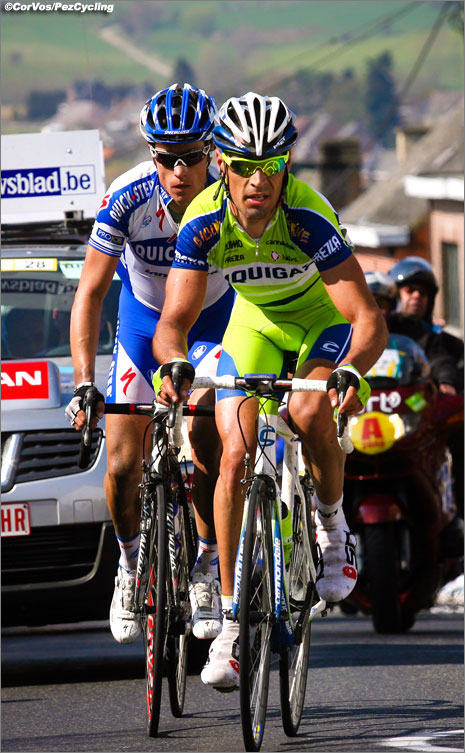 Quinziato spent 60k in the break at Flanders in 2009 before being caught by a storming Devolder.

PEZ: You’ve been threatening to pull off a big win in the Spring Classics over the last couple of years – is that where you’re best?
Yeah, I guess so. I improved every year in these races. In 2009 I was in the top 10 in Gent and Roubaix, 4th in De Panne and close to the podium in Flanders. I think I can aim for a bigger result next year in one of these races.

PEZ: What do you think about Gent-Wevelgem being 250km now? Does that change anything for you?
I heard about that. I don’t know yet how this 45km extra will affect the race. Gent-Wevelgem was already a hard race above all because of the wind. Making it longer can only make it worse! 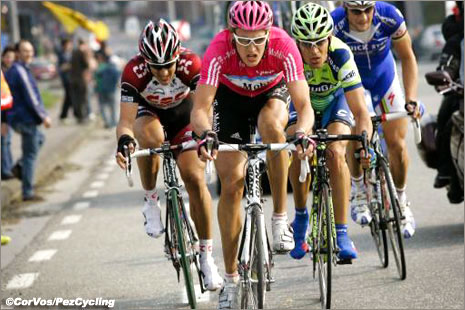 Manuel made the superstar break a couple years back with Boonen, Cancellara, and Burghardt. He finished fourth, but he made a huge statement.

PEZ: Gent-Wevelgem will be on the same weekend as the E3 Prijs – does the longer distance on Sunday’s Gent-Wevelgem affect you for Saturday’s E3? Which is more important?
My team will take part only in Gent-Wevelgem, so no problem to choose.

PEZ: Why Liquigas? For a rider such as yourself with such huge talent as a Classics rider, Liquigas doesn’t seem a perfect match…
From a side your’re right, but I’m Italian and Liquigas is doubtless the best Italian team. Here, I also have the guarantee that I can do my own race. An experience abroad in the next few years does interest me though. 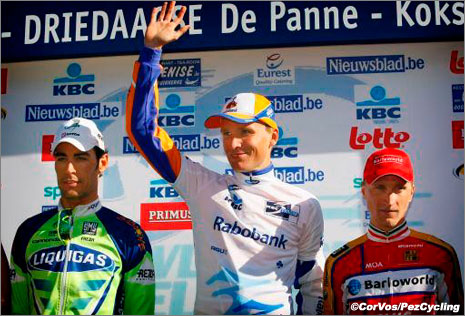 Quinziato on the podium at the Three Days of De Panne.

PEZ: What are your goals for 2010?
At the moment, I’m just focused on the Northern Classics. I want to be at my top condition starting from Milano-Sanremo. In the second part of the season I’ll take part in the Tour de France where I hope I can win a stage. After that, I’ll be at the Vuelta, because I want to prepare for the Worlds. I hope I can be in the team for the road race, obviously to help the leaders.

PEZ: Are you doing anything different this winter compared to years past?
Yes, for sure. I’ve had a winter quite different from the other years. I stopped early with the bike in 2009: the 20th September, which was the last day of the Vuelta. I didn’t train on the bike for 50 days, but I walked a lot. 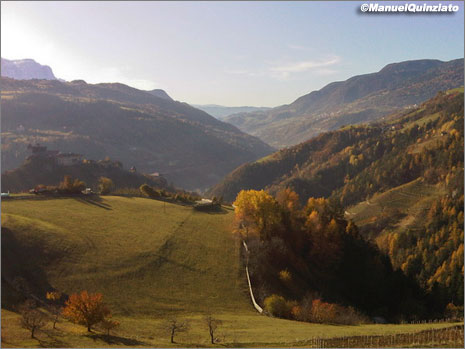 From Manuel’s Twitter: Another walk on “my” mountains! That’s the view!

I live in Bolzano, at the foot of the Dolomites. I went hiking in the mountains at least 20 times. I also did 4 hour hikes with my friends. The landscape is amazing, and you can enjoy being in nature in the middle of the forest…and it’s hard. I gained just 3kg after the Vuelta compared to previous years where 6-7kg was normal. 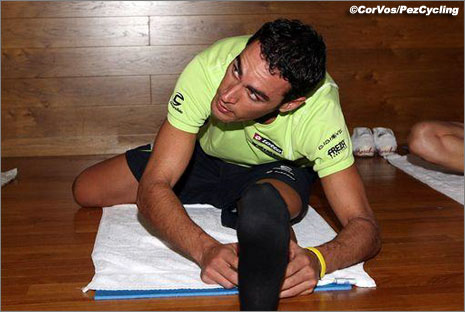 Manuel stretching at the recent Liquigas camp at San Pellegrino.

PEZ: How about the Liquigas camp at San Pellegrino – it looks cold! How is that?
When we got there, there was almost no snow even at 2000m, but later we got one meter in two days. Because of that all the connection broke down. No mobiles, no tv, no fix phone and no internet. It looked like in “The shining” except that the company was better… 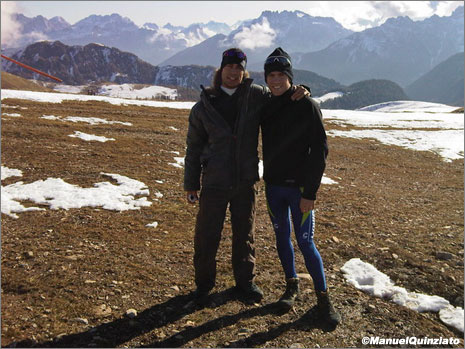 Before…at the top of the San Pellegrino with Brian Vandborg. 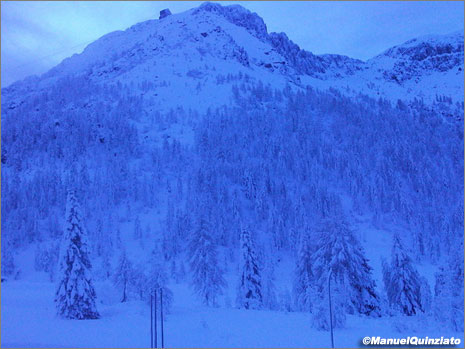 15 of my teammate are still there doing a sort of team-building. Instead the other 13 including me are already in Benicassim, Spain, for training with the bike.

PEZ: How do you like your Cannondale?
The Cannondale is a really a good bike. The Super Six is really, really stiff. For this reason, we can’t use it for the Northern Classics on the cobblestones. For the Classics, we use the Synapse, which is perfect for this kind of race. 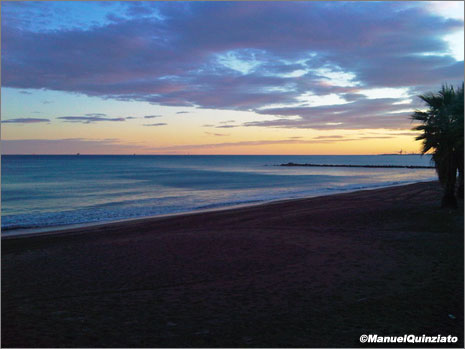 Just half a day later and Manuel is enjoying the oceanside views in Benicassim.

PEZ: You’re from Bolzano – do you spend a lot of time there?
I live there, but I’m often abroad for races, but also because my girlfriend is Spanish and lives in Madrid.

PEZ: Any favorite routes in the Bolzano area? The Dolomiti?
In the summer when I want to enjoy the landscape and do some long climbs I ride the “Giro dei 4 Passi”. In 150km I can do Passo Gardena, Passo Campolongo, Passo Pordoi, and Passo Sella. It’s spectacular (Ed. That sounds familiar – check out the Sella Ring!). I think my area is the best place to train from March to October. In winter it is too cold, so I stay mostly in Spain. 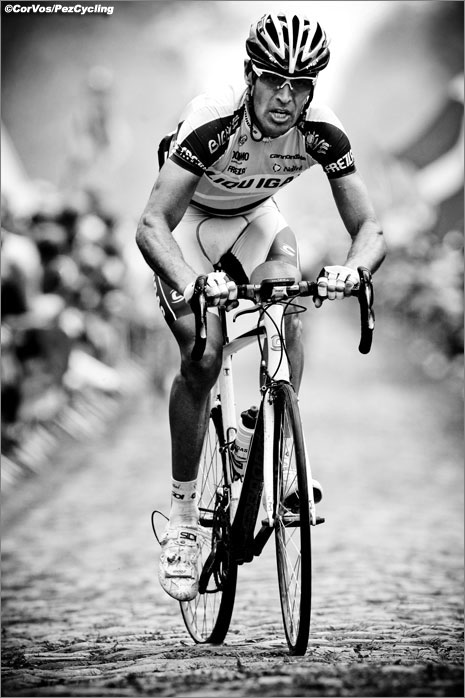 PEZ: How did you get started in bike racing?
My family didn’t know anything about cycling, but when I was 8 I got a BMX bike and wanted a helmet. My father signed me on at the local cycling sport group. I started racing BMX and the next year, I began doing road races with the same team.

PEZ: You were on the podium as a Junior in the Team Pursuit – do you have any desire to get back on the track?
Track is always in my heart. Last year I did the Six Days of Milan, and it was a great experience. I think that the track can give you something more for the road races, but it’s a few months until Italy has an indoor velodrome. It has always been complicated to go to a track. Maybe in the future I’ll do more. 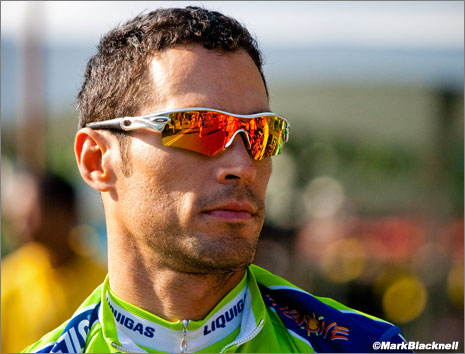 PEZ: Do you train with power? If yes, how does it affect your training? How do you use it?
I’m SRM addicted. I think it is necessary to to train properly. The difference between working with power or just heart rate is that with SRM you can do lots of short efforts at high power, which isn’t possible to track effectively with only heart rate. I train a lot also on the home trainer like the pistards (track riders) do! 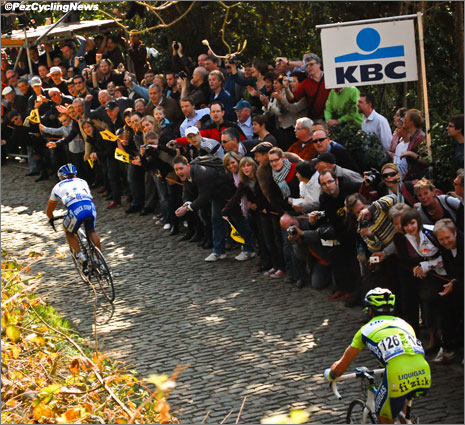 PEZ: What is your favorite race?
Flanders. 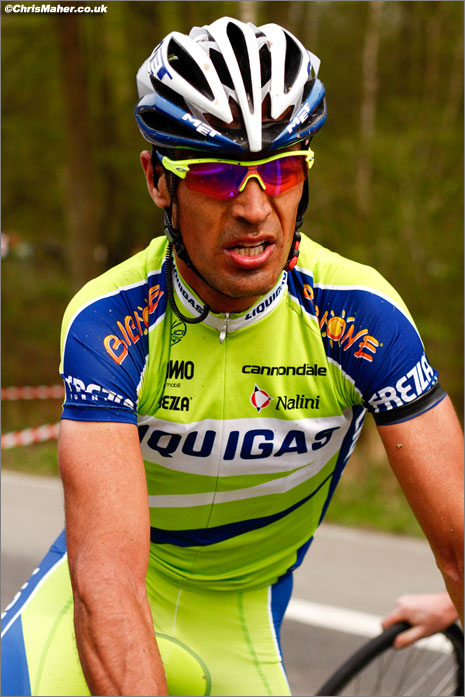 The Arenberg Forest wasn’t too generous to Quinziato in 2009: he flatted at that critical juncture in the race.

PEZ: Rain and Wind or Warm and Calm?
For living, doubtless warm and calm… honestly also for racing… But with the rain they say that half of the riders are already beaten, so I hope to be in the right half of that! 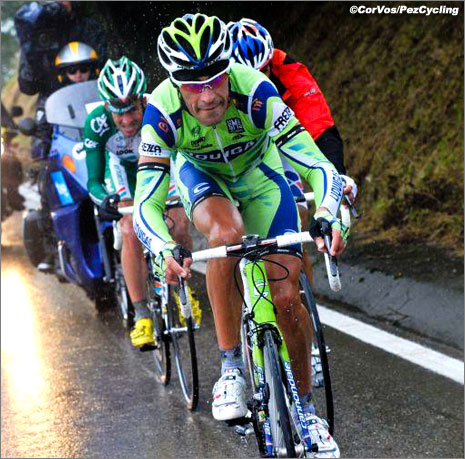 Like any rational person, Manuel enjoys the sun and warm, but he does just fine in the rain as well.

***
Thanks for your time, Manuel. Best of luck in your training over the rest of the winter.

Manuel is adept with all things 21st century, whether it be training with power or the internet. It’s not hard to find Quinziato’s presence on the worldwide web. For more on Manuel Quinziato check out the following…

1. His excellent Twitter page (it’s in English!) Check it out.

2. ManuelQuinziato.it is a solid, regularly updated, good-looking page. Give it a look. It’s in Italian, but that shouldn’t preclude a little skim through.

Power Output and Cadence – Learning from the Pros