With the Giro well and out of the way and the pre-Tour prep races about to hit full steam, it’s worth a quick look back at another race that was lost in the shuffle: the Tour of Belgium. We caught up with Englishman James Spragg of Belgian Continental team QIN Cycling after he survived a wet, windy and wild five days in Belgium’s national tour.

PEZ: Thanks for taking the time to talk to us – an overdue GC win for Devolder, James?
I didn’t see much of him for the first three days – but he kept out of trouble, rode a good time trial and on the last day he rode very strongly on the finishing circuit. Gilbert had bad luck though, he had to ride in the rain in the time trial and then punctured on the last stage.

PEZ: Stage one went to Gilbert.
It was a horrible day, windy, cold, raining – I had my rain jacket on for the full stage. It took 90 K for the move to go and they got to three or four minutes before the reaction – but the peloton misjudged it and they stayed away, probably because there wasn’t that much time left to chase. Coming in to the finish we could see them but we didn’t get up to them; you have to remember that there were some strong teams not chasing because they were represented in the break. 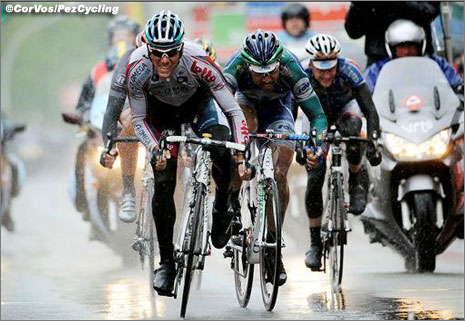 PEZ: Kenny Van Hummel was the man on stage two.
The first hour of that stage was very quick, there were attacks all the time, if there were 160 guys in the field then 150 were trying to get in the break! Once the attack of the day went, I stopped for a ‘natural break’ – I had a quick look at my computer and we’d done 35 K in 40 minutes.

It was a funny sprint, there was a left hand turn on to a boulevard then it dragged up for the last 100 metres at maybe eight or nine percent – I think Kenny just timed it best, hitting the ramp with the speed. 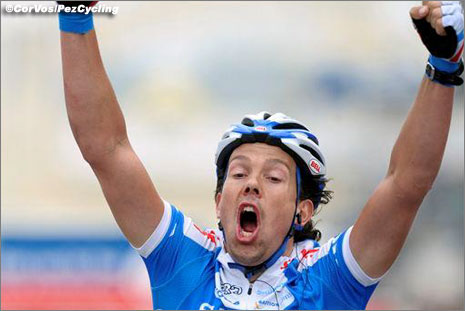 PEZ: Another sprinter on stage three – Jimmy Casper.
That was the stage with the big crash – it was a place to place stage; very nervous and fast with the tail wind, you had to be at the front. It was a good stage for us, we had Jan Kuyckx in the break but it came together for the finish. With two K to go there was a little descent, it ‘swamped’ and there was a touch of wheels and 30 or 40 guys came down. I just aimed at the nearest soft thing – which was the verge – and whilst I was in the grass, I didn’t come down. 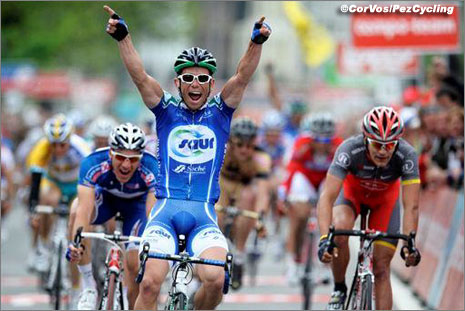 PEZ: Stage four and Dominique Cornu had the TT power.
It’s good to see him back up there; it was a tough loop, corners, false flats, windy and the last ten guys had to ride in the rain.

PEZ: Are you ‘James the chrono man?’
No, I’m not a big TT man, I just get round – maybe that’s weird coming from a GB rider because we have a history as a time trial nation but it’s just something I’m not really into. 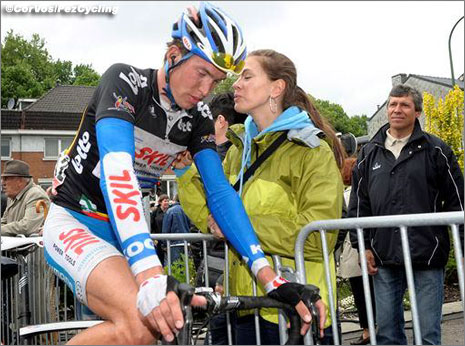 PEZ: Stage five was the big sort out.
It was another horrible day, raining, cold – but a good day for RadioShack they were active all day and Ben Hermans took the stage. The race was in bits within five K of the start; we climbed one of the hills which would be on the finish circuit and it exploded. There were cross winds and false flats all day, the break went at 35/40 K and the race was blown apart. It eased once the break went but it was a very hard parcours, we climbed La Redoute and some of the other hills from Liege-Bastogne-Liege. There were maybe 60 at the foot of the first climb on the finishing circuit, but over the top it was down to 25; we chased but couldn’t get any closer than 20 seconds. Gilbert was in the break but punctured and came back to our group with a lap of the finish circuit to go – he managed to bridge back up, but he was the only one. 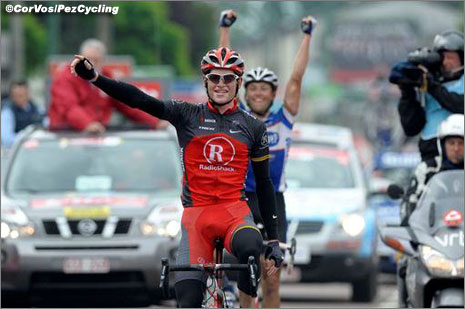 PEZ: There was a huge body count that day.
It was tough, it split on every climb and then it would regroup but there were less and less guys getting back after each hill. 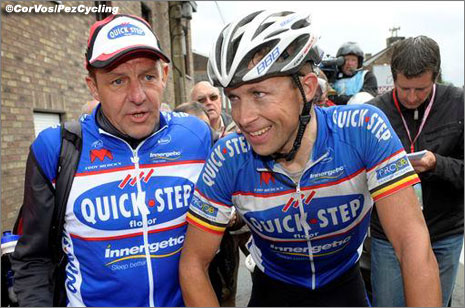 PEZ: And is QIN Cycling Team gelling?
Definitely, the riders are getting to know each other and the staff understand the riders better – strengths and weaknesses and the like. We’ve had our first UCI 1.2 win with Jan Kuyckx at Hoboken, it was a good day for us, Nicky Cocquyt was 4th and I was 9th with all the good Belgian teams there. The sponsor is pleased with the exposure we’ve been getting – QIN is a coffee house in Brugges, but their aim is to expand to eight locations across Belgium.

PEZ: I see you have ‘cross man Ben Berden on board?
Yeah, he’s pretty good on the road, it’s not just preparation for the crosses; he attacks and goes with the moves and he’s training well.

PEZ: The Tour of Belgium finished Sunday and you’re racing Tuesday, again.
A pro kermesse, yes – I was going OK and finished in the bunch. All the guys that rode the Tour of Belgium were a bit tired – I was talking to Philippe Gilbert and he said that he was feeling his legs; so if Gilbert is tired, I guess it’s OK for me to be the same! 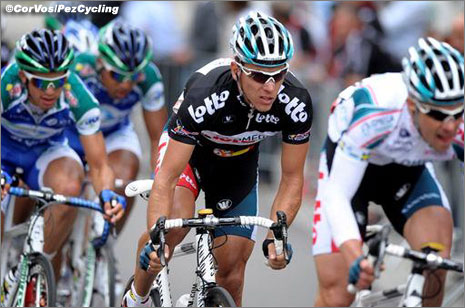 PEZ: How does a typical week go in Belgium?
I race two or three times each week; Saturday, Sunday and a pro kermesse midweek. You have to strike a balance between training, racing and recovery. At this time of year you’re racing so much that training takes a back seat and it’s more recovery rides. My racing is in blocks, so if you have no race for maybe 10 days that’s when I do specific training – for example, I knew that there was a lot of climbing in the Tour of Belgium so I prepared in the Ardennes for it.

PEZ: Which performance has given you most satisfaction, this year?
Hoboken, I rode well, I was in the break all day and the team rode really well too – when Jan Kuyckx got away I was defending for him. I’m feeling a lot stronger this year, even although I’m riding at a higher level – I was comfortable in the Tour of Belgium peloton and only really feeling it when the big boys went on the attack in the hills.

PEZ: Are you coming home for the Nationals?
I’m undecided, I have to sit down with the team and look at my programme – I’d only want to go in to the Nationals off a good race base; the team is riding the Delta Tour in Holland but there’s also a one day in France on at that time. If i’m riding the Delta then I might well come home.

PEZ: The pro life is agreeing with you, then?
I’m loving it, this year has been great, I’m living not far from where I was last year so I can see my friends and train with the same guys – you need balance, you can’t just go home at night, sit in your room and think about cycling.

But I suppose more than anything, I’m loving being in the big races.

***
‘Loving it’ – that’s what it’s all about ! With thanks to James and hoping that Belgian weather improves for him.