With the London Olympic Games creeping ever closer, Ed Hood recently caught up with a real medal prospect, Shane Archbold. The young track racer, currently racing and winning on the Belgian kermis circuit, has an eye on the newly included omnium event and looks to be a solid contender for the multi-discipline event.

For the Beijing Olympics in 2008 it was the kilometre which got the chop.

For London 2012 the axe is bigger and sharper – the individual pursuit, points and madison all become historical footnotes.

Apparently we need ‘gender parity’ – so how come the girls don’t ride the same distances? – and we need to be ‘Mondialised’ and if this means that the best nations in the world don’t get to ride because they happen to be on the wrong continent, well, the UCi and IOC know best, don’t they?

No individual pursuit, no points, no madison.

We do get the omnium.

Some less complimentary folks say that it’s for ‘jacks of all trades but masters of none.’ 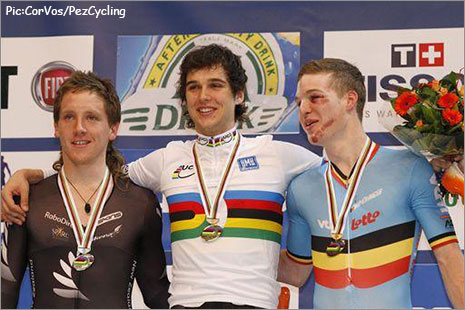 On the podium at Worlds.

But the other school of thought is that it’s for the most versatile trackmen on the planet – you must be fast, strong, have excellent recovery and be tactically highly astute.

There are six disciplines run over two days – flying lap, points and elimination on the first day; pursuit, scratch and kilometre on the second day.

The aim is to get as low a score as possible; the score matching the placing in each discipline.

It’s highly unlikely that anyone will ever achieve it, but theoretically the best score achievable is six points – six times one point for each win.

But enough pontificating; we decided to speak to a man who’ll be at very centre of the battle for gold in London – Kiwi, Shane Archbold.

PEZ spoke to Archbold after the Worlds in 2011, when he took silver – but in 2012 his medal chances evaporated when he missed an Elia Viviani-inspired lap gain in the points race.

Whilst one of the hot favourites for London, Archbold is at a slight disadvantage to some of his Olympic rivals due to his perhaps having to be fifth man in the New Zealand team pursuit squad.

Canadian, Zach Bell, who took silver in Melbourne in the omnium, when asked if he could close the gap on home omnium winner Glenn O’Shea by London, explained:

‘I think I have a number of advantages in London – for a start I don’t have to worry about the team pursuit. 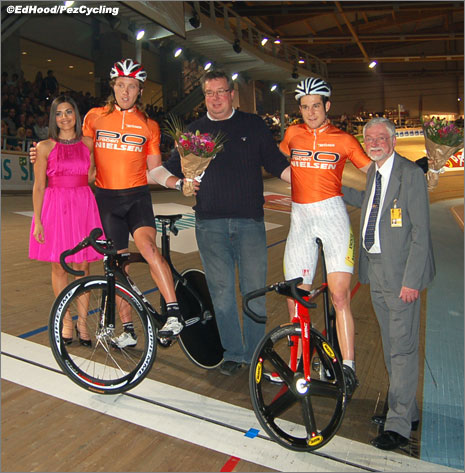 Even if O’Shea doesn’t have to ride that, he has to train for it and it’ll be on his mind that he may get called up to ride.

There’s no Canadian team pursuit squad in the Olympics, so I don’t have that distraction.

(Under Olympic rules, a nation’s omnium rider must come from the five riders nominated for their team pursuit squad, ed.)

I think that the team pursuit will go below 3:50, so he has to be prepared for that, whether he rides or not.’

Archbold may have the same distraction – this was just one of the issues we spoke to him about when PEZ caught up with him shortly after the Worlds.

PEZ: Shane, thank you for speaking to us – how did you miss Viviani’s lap gain in the points?
Shane Archbold: Because I hadn’t positioned myself well enough when it went and I did not have the form to ride across to it once it was gone. 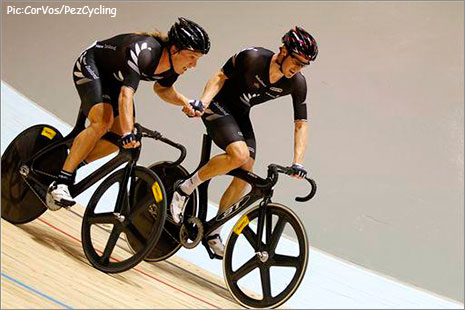 PEZ: I make it that sixth or better in the points would have won you a medal – that must haunt you?
SA: Yeah, of course it haunts me.

But also if I won all of the timed events I also would have won a medal.

It’s the omnium – once the racing is done unfortunately you can’t take off points.

I have my things to work on before I hopefully race in London.

PEZ: And that question again – why the omnium?
Because it’s different, I love the emotional roller coaster that it throws at me every time I line up for it.

Also, the obvious reason that is suits me.

PEZ: How do you train for it?
SA: You train everything.

In the Omnium you use every training system there is so it’s just a matter of fitting it all in.

Sometimes this proves very hard – but it’s got to be done.

PEZ: Which is your favourite event?
SA: The elimination for sure – have you seen one?

It’s a circus on wheels absolute madness what’s not to love?

PEZ: Which is your least favourite event?
SA: The kilo, It brings the event to an end – it’s always boring waiting for the next omnium to come around.

PEZ: Do you think that it’s right to have inexperienced riders in an event at Worlds level?
SA: If you are at world championships you have obviously qualified so you deserve to be there, but sometimes inexperience people do slip in there.

It makes the races like the elimination just that much more fun! 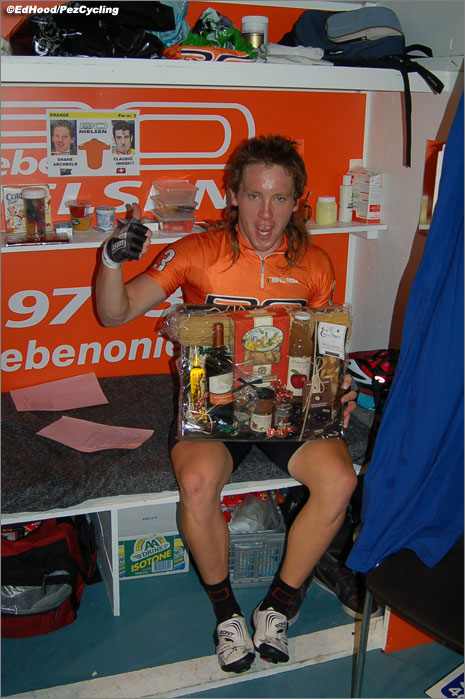 PEZ: Will it be the same names in London – O’Shea, Bell, Viviani, Hansen?
SA: For sure it will be; the only extra name that will be racing would be the Colombian, Arango – that’s to the best of my knowledge.

But you never know who will come out of the wood work, it Olympics year and anything is possible.

PEZ: Do you feel you’re on course for London?
SA: Totally, I mean yes, I have a lot of work to do, but I really think it’s possible given I have around 100 days to get things sorted.

I’m sure I’ll be in the best form of my life, but hey maybe that’s not good enough to walk away with the win.

It all sounds very easy but I have a long three months set up ahead of me.

Plenty of one day road races, stage racing and maybe even a six day could be all part of the build up.

PEZ: Will you be getting out to London early avoiding the jet lag?
SA: I had 5 days off In New Zealand then I have moved back to my second home in Belgium I am here for the time leading up until the Olympics.

The Worlds is all about riding the huge gears for me, the six days riders I came up against at the Copenhagen six day are still scratching their heads at the gears we like to ride in our parts of the world.

I just think that their knees are very precious to them! 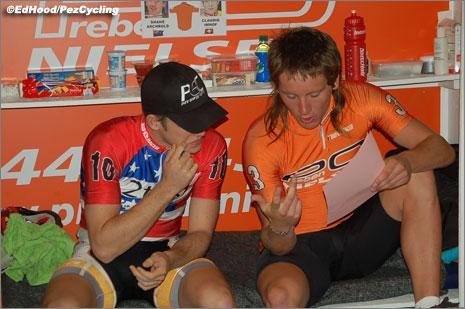 PEZ: Massage must be very important between all those races – and you must need a good mechanic?
SA: Of course, these are the two most important people leading in to racing and on race days.

It would be very hard to go into an omnium without this support.

It’s hard enough doing the racing alone let alone without the help of Soldier and Chris, my Swanny (soigneur) and Spanner (mechanic) from home.

PEZ: What’s the situation with the team pursuit – are you fifth man for London?
SA: No, I am not the fifth man; I decided a few months back I would solely focus on the omnium at trying to get selected just for that.

If this doesn’t work out for me I won’t be selected and I’ll have to try and make a plan B for this year.

PEZ: If had the power in the UCi, what would you change about the omnium?
SA: I wouldn’t change anything within the omnium I’m happy with how it is run for now.

But I guess some people would say I should love for the points race to be taken out!

PEZ: Did you enjoy your six day adventure in Copenhagen?
SA: Loved it, It was super fun; I did it the hard way with arriving so close to the start.

It definitely helped my form come up for the World Cups and world championships.

I look forward to next season with the possibility of riding some more six days.

PEZ: How did the Worlds madison compare to a hard six day chase?
SA: The World championships Madison didn’t even come close to the pain I went though in the 100 km chase in Copenhagen six day.

I was obviously a lot fitter at the Worlds but those 100 km chases are definitely something very special.

It plays all types of mental games riding around at 140+ RPM for two hours – but it probably wasn’t ideal arriving in Copenhagen 24 hours before I was due to race a 100km Madison!

PEZ KIT: Sharpen Up For Summer!