March wasn’t just about cobbles and ‘bergs;’ somewhat smoother surfaces were being exploited in other sectors of the cycling firmament. Over in Holland on the boards of Apeldoorn, the Worlds track championships were taking place. As with virtually all else in our wonderful sport, the face of track racing is changing.

Even though the Olympics are another Worlds and another World Cup away, some of the big players – notably GB – have abandoned events in which they have a good history of results because these events no longer appear on the Olympic programme.

The individual pursuit, Madison, points and kilometre were all given the cold shoulder by the Union Jack team – and Head Honcho, David Brailsford is even talking of not bothering to ride the track Worlds next year as it ‘may interfere with Olympic preparation.’

With the removal of these races from the Olympic programme, those who like the cut and thrust of massed start events on the track have to look to the omnium for their ‘kicks.’

The omnium at Apeldoorn comprised: flying lap, one kilometre TT, three kilometre pursuit, points race, scratch race and elimination; however, the format in London for the Olympic medals may be different.

Points are awarded from first to last for each race on a ascending basis – the man with the lowest overall point score wins – shimples!

I was one of the skeptics; but we were treated to some savage and exciting racing as the six events progressed.

The man who many expected to win – mulleted Kiwi Shane Archbold, came away with the silver medal; he took time to talk omniums to PEZ once he was safely back in the land of the long white cloud.

PEZ: How old are you, where are from in NZ and how did you get into cycling, Shane ?
Shane Archbold: I’m 22 years-old born and bred in Timaru, Central South Island of New Zealand. (Home of the great Phar Lap – legendary race horse)

I started cycling through my school team. It was a great idea at the time, I mean, where else could I make $5 on a Tuesday night and $10 on a Saturday?

PEZ: I believe you only started the omnium in 2010, what did you ride before that and what was the attraction with this discipline ?
SA: My first omnium was at the Oceania Championships in November 2010; since then I have ridden five omniums with four podiums.

Prior to riding the omnium I was concentrating on making the NZ team pursuit squad; which is still in the back of my mind – but with a new found love I have to stick to it. 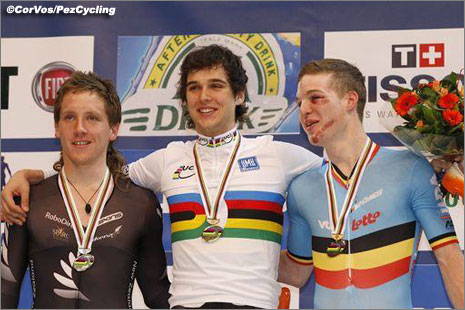 Shane Archbold on the podium in Appeldoorn.

<>PEZ: You had a great World Cup season riding the event – wins in Manchester and Melbourne; but only 8th in Cali ?
SA: Cali is inexplicable to this day. I started the Melbourne World Cup with a dream of getting a top ten, after winning, my confidence grew going into Cali; but it just didn’t happen and I struggled.

Which brought me back to the fact Melbourne was a fluke, then after Manchester I figured Cali was just the result of a long season and needing to rest.

It’s been a long wait, but finally I could repay them at Apeldoorn, their sponsors, and my personal sponsors with a deserved result for all.

PEZ: How do you set about training for all those disciplines?
SA: It’s easy to train for the ominum, you don’t need to specialize for one event so it’s about being 100% fit and training all disciplines briefly and not forgetting about one of them – because that’s where you’ll suffer.

PEZ: Which are your best disciplines ?
SA: All of the timed events I would call my best; I got top four in all of them – they are the controllable events.

All three bunch events are uncontrollable you can be the best there and still be in 16th place.

PEZ: Which disciplines need more work ?
SA: To become Olympic champion I don’t need to specialize, I just need to get evenly better across all events.

PEZ: Your kilo is world class in the middle of all those other races – have you considered specialising in it ?
SA: I’m getting faster with every kilo I do, but I could never specialize for it because I just can’t start fast enough.

Its simple, I may be able hold my speed and do a good time, but three seconds faster isn’t possible.

My kilo at the Worlds was a personal best purely because I started 0.4 second faster than I have previously.

PEZ: How many bikes do you need ?
SA: I use the same bike for all races and just change handlebars.

PEZ: How do you select your gears for all the different disciplines ?
SA: Gear selection is always hard for the bunch races because your legs are always more tired than you expect.

But it comes down to gut feeling for me; whatever feels right on the day.

PEZ: Has the format for the Olympics been finalized ?
SA: To be honest I’m unsure; I haven’t even thought about it.

PEZ: The Worlds – a silver medal for you, are you happy with that?
SA: More than happy, I’m completely stoked, I mean four months ago I was trying to get into the team pursuit for the first time after four years of trying – and now I have a silver medal in another Olympic event at the world championships.

What more can I say?

PEZ: Any ‘with hindsights’ about the Worlds ?
SA: Ha! In hindsight I would have liked to win!

PEZ: What about all the comments that the Apeldoorn track was ‘slow?’
SA: I rode one personal best and was close to other personal bests in my two other timed events; so I wouldn’t say it was slow.

But other riders think that it was; although it’s good to see world records, the track is the same for everyone while competition is on. 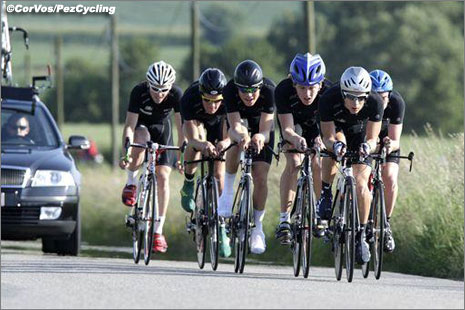 Hard at work on the road with his teammates in the Thьringen Rundfahrt team time trial.

PEZ: Who do you respect among the opposition?
SA: I have huge respect for all of my opposition for qualifying for the world championships and finishing.

PEZ: What are your goals now ? (will there be an omnium in the next Commonwealth Games ?)
SA: With the Olympics on next year it is definitely my goal for the next 18 months; but there are other races I have my eyes on – until next track season it’s time to make a step forward on the road.

I’m not sure the omnium could make it to the Commonwealth Games due to there being so few countries; it would cause problems with collusion but in saying that I’d love to see it there.

PEZ: Finally – you know we’d have to mention it ! – the mullet; was it really as a result of a bet with Hayden Roulston – and has he paid up ?
SA: Ah yes the mullet, isn’t it beautiful? I’m sure it acts as a go fast rather than a go slow.

But yes, it did come from a bet with Hayden, and yes, it has been paid for.

Although not in the cash sum like we first talked about, but he has definitely paid his debt many times over with the help and support he has given me over the years.