It’s rest day #2 and time to get to work on those rider interviews. Liquigas’s Brian Vandborg is riding his second Tour – amid the chaos of a rest day hotel we found a quiet spot to chat.

PEZ: How has the rest day been, Brian?

Brian: I slept ‘til 09:30 but probably could have slept ‘til noon – I was so tired. We went for a short spin on low gears, about an hour – the last four days have been really hard. Yesterday was so hard, but it didn’t influence the GC, it just meant that there are a lot of guys out there getting very tired. 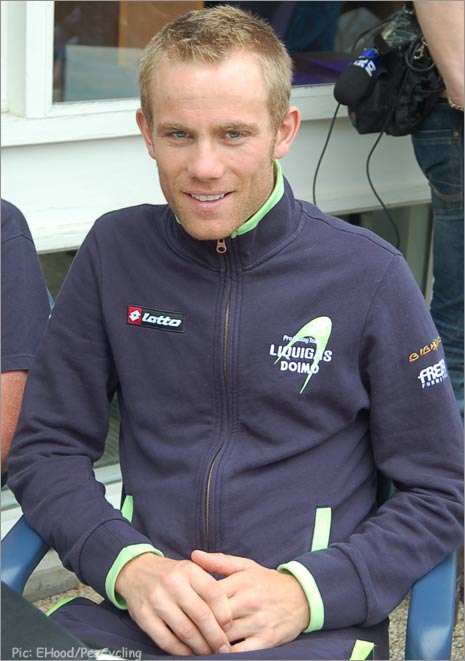 PEZ: This is your second Tour, Brian, what lessons did you carry with you from the first?

To be a little bit more calm; it’s such a big show, a circus that it’s hard to keep both feet on the ground. Last year it took me a week but this year I managed it after a couple of days. Even if you ride the Tour ten times it’s still hard to remember how big it is and maybe you forget how hard it is, too – and after a few days you’re thinking; ‘what the hell am I doing here?’ But you’ve forgotten the bad stuff by the following year and you’re fighting to make the Tour team, again!

PEZ: We saw you in the break the day Voeckler won.

The first two hours were a 47/48 kph average, I was lucky that day, I hadn’t really been chasing the break but I got into it. There were 30 in it to start with, that’s too many, but it trimmed down to 15 with guys coming up and getting dropped. I felt pretty good on the climbs but whilst I’m fine on six or seven percent, ten percent is just too much for me.

Voeckler was annoying that day, he was bluffing saying he was tired, but everyone knows that’s what he does when he’s feeling good, he’d send his team mate to the front when the speed dropped but we all knew he was going to go.

I thought that maybe I’d get back up to Ballan and the Footon guy on the descent and fourth or fifth wouldn’t be so bad; but on the descent there wasn’t a motor bike with us, it’s not like you draft it, but it watching it helps you pick your lines.

We ended up getting caught with about 500 metres to go. 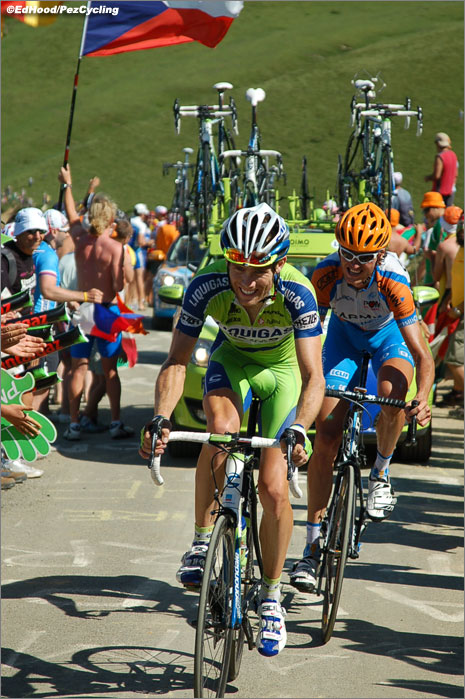 Brian grits his teeth and gets on with it on stage 15.

PEZ: Was that your best day of the Tour, so far?

No, the day Lance crashed I felt really good, if I’d felt like that in the break then maybe things would have been different – although it would be very hard to beat Voeckler, he’s a strong guy and knows how to win.
Fedrigo is like that too, when they’re in the break, they’re winners.

PEZ: And the worst?

The day that Chavanel won his second stage, it was very warm and there were six or seven hills in the finale – they seemed to sprint every one. That was hard. 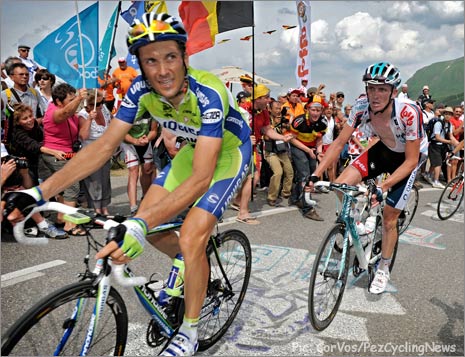 PEZ: Liquigas goals for the race?

Both of our captains – Ivan Basso and Roman Kreuziger – in the top ten and one of them in the top five; that won’t happen now but I think we can get Roman in the top ten.

PEZ: What’s your remit for the Tour?

To look after our captains, but knowing that there would be three days where I’m allowed to go with the break, I got in two and one succeeded so I can’t be unhappy.

PEZ: It looks as if Ivan hasn’t recovered from the Giro?

Ivan trains hard but knows when to ease off – but even given that, doing a Giro in the wet takes its toll and then there are the post Giro criteriums and the demands of the media. Last year, Sastre rode a good Giro but blew in the Tour, so did Menchov – he didn’t ride the Giro this year, it’s just too hard.

PEZ: How does the Tour compare to the Giro?

The Tour is always number one, it’s faster and there are more stronger, riders in good shape – but the Giro organisers always try to make the race tougher, more spectacular. 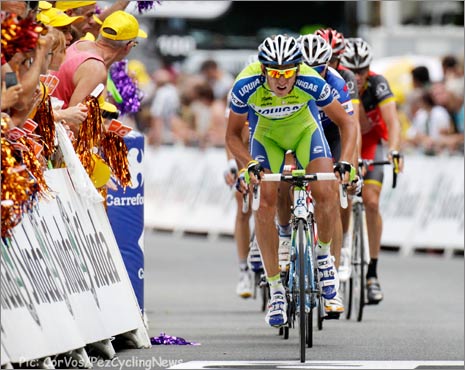 He’s not that far away but Leipheimer is a better time triallist – it’s been a surprise this year how competitive it is; guys like Jurgen Van den Broeck and Ryder Hesjedal still well up there. But the damage will be done on the Tourmalet tomorrow, there’s been a steady string of guys cracking, Wiggins, Evans – there’ll be more tomorrow.

PEZ: How do you cope with the crazy fans in the mountains?

It depends how close to your limit you are, sometimes you have to laugh but the absolute worst thing is folk who through water in your face at close range, there’s just no way that’s a good thing to do. As far as taking drinks, I’ll only drink from a can that I open, you can’t take chances.

PEZ: Tell us about gruppo riding, do you ever wait?

At the start, everyone goes as hard as they can then, the gruppo just kind of happens. Yesterday I was with Ivan, he wasn’t feeling great and I wasn’t at my best but we were still going too hard for some of the guys, they were shouting; ‘ woooaaa!’ But then those are the guys who take crazy risks on the descent and if they drop you there’s no way they’ll wait – of the 80 guys in the gruppo yesterday only about 25 were actually working. I guess that at the end of the day it’s pretty much every man for himself.

PEZ: Yesterday was six hours for the gruppo, how do you take on enough calories?

You don’t! You definitely don’t get enough calories; it’s hard to eat, you can’t on the climbs and its risky trying to eat at 90 kph in the valleys – you just have to take gels.

PEZ: What about breakfast and dinner?

We have breakfast three hours before the start, a problem for me is that with it being an Italian team they want you to eat pasta – but I hate it at that time of the day. I brought oatmeal with me and the other guys say; ‘what’s that?’ For dinner, we have our own chef with us and he’s great, usually it’ll be pasta based but he does risotto as well.

He cooks amazing things that you want to eat; at the end of a three week Tour sometimes you just don’t want to eat, because you’re so tired – you behave like a spoiled five year old, folding your arms and pouting! I think I didn’t eat enough on the last rest day, but I won’t make that mistake this time.

I only saw what happened, last night. It’s hard to say, there was the Spa stage where Hushovd wanted to race but Cancellara stopped it, than there were crashes on the pave. If Contador knew then maybe he should have waited but Menchov and Sanchez weren’t waiting – whatever happened, it’ll be a pity if Andy loses the Tour because of it.

PEZ: And how are you going to recover from all this hard work?
See my family, friends – eat some of my mum’s homemade cookies with ice cream. I took too much of a break last year and ended up racing in Japan in October – this year I want to exploit the form I’ll come out of the Tour with. I think I can race for another six weeks to two months, maybe make the Worlds – and then I’ll call it a day.

With thanks to Brian; we wish all the guys at Liquigas all the best from Pau to Paris.

Tour Coach: It’s All About Tomorrow