Rider Interview: Beards are the fashion statement of the moment in the Pro peloton, but the first big beard in cyclo-cross was spotted by Ed Hood on a recent visit to Belgium. The facial plumage belonged to Canadian Mark McConnell, so Ed had to find out all about the cross man with the beard.

“Who’s the dude with the Grizzly Adams beard?” we said to ourselves at the Koksijde ‘cross. Mark McConnell (Canada) our one Euro start sheet told us – we just had to have a word . . . .

PEZ: What’s your background, Mark?
I’m a working class ‘Pro’ from Canada. At least, that’s what my race licence tells me. I’m not paid to ride my bike, not often anyways. I’ve been working as a bike messenger full time based out of Calgary, Alberta for the past four years and have been racing for five with a supportive club team – Synergy Racing. I’m here with my wonderfully supportive wife, Aimee – living the grind years of an aspiring professional cyclocross racer and the best way for me to make a go of it was to come back to race in Belgium where the best races in the World are only a couple hours drive and held during such a condensed period. This is also the first time I’ve been able to come to Belgium to put in a few months of full time training and racing without life’s typical distractions like holding down a full time job for instance.

PEZ: What’s the Canadian X scene like?
The scene in Canada is much smaller but full of spirit. We recently hosted our Canadian National Championships in Winnipeg, Manitoba in late October and they put on a fantastic venue with live streaming and good crowds. If we hosted Nationals when the rest of the World typically does, we’d be competing not only against other riders but likely dealing with an extra 30 cm of snow on the ground, in minus 30 Celsius conditions as well. 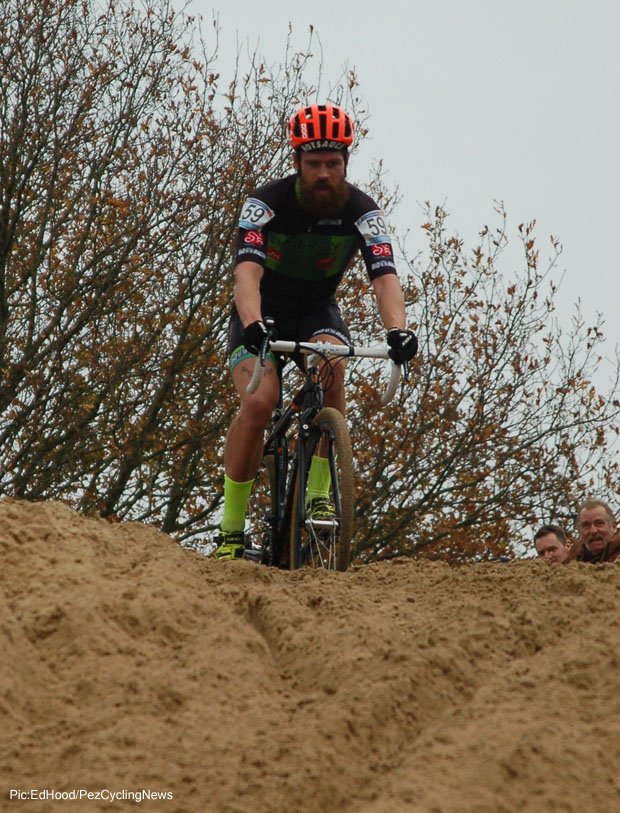 PEZ: What was your inspiration for the adventure?
Reading about Phil Gaimon’s experiences in Pro Cycling on $10 a day – where he talks about the importance of hunting big races and submersing yourself in the sport if you hope to get to the next level. Then there’s Joe Parkin’s book ‘A Dog in a Hat’ – a tale of kermis racing in Belgium back in the late 80’s. Finally, friend and fellow racer, Alexander Revell’s journey through the 2012 CX season where he decided to chase his love for ‘Cross to Belgium as well – he was quickly welcomed by the people not only for his luxurious moustache but also his will and strength of character to step up against the giants of the sport. Essentially, racing here in Belgium is largely fuelled by a mix of romanticized ideals of professional racing and a self imposed commitment to see how far I can develop in this ridiculous, beautiful sport. And I’m walking in the steps of Canadian ‘frienemy,’ Aaron Schooler – we’ve travelled to UCI races in the US, years ago and he mentored me into the sport of ‘cross. We’ve competed against one another for years and he lives in Germany now with his wife, Emily – where he now races for the supported pro team, Focus Bikes.

PEZ: How did you get into the World Cups – was the Canadian Federation helpful?
Canada isn’t very well represented at the European ‘cross races; often where eight or more spots are allocated to each Country in World Cups – maybe one/four of my countrymen or women will appear. When I told them I was planning a three month European Cross Campaign including five World Cups and the World Championships, they were very helpful to grant me entry to the big ticket races.

PEZ: Your costs must be pretty hefty – do you have sponsors?
The costs of this trip aren’t inconsiderable so thanks to Synergy Racing, Rob Pryor of SRI Importing, Dan Ricter of Cafe Roubaix, Chris Webster of The Cyclepath, and Steve Smith of Bio Racer clothing – all of whom pitched in to help by way of some funding or equipment. I filled in the gaps by fundraising for Europe earlier this season a little more creatively – as a way to give back to my community, I started selling custom designed t-shirts and cycling caps.

Enter, ‘Hot Sauce Cycling’ – a self branding idea that stemmed from my race nickname, ‘HotSauce.’ I’ve been racing in a custom kit from BioRacer with my HotSauce logo on the back and the Hot Sauce Caps under my lid all season. I hope to do another run of cycling caps with BioRacer to sell to the Belgians over here during the Kerstperiode (the Xmas period when there’s a ‘cross practically every day for two weeks in Belgium, ed.) to help fund my racing. 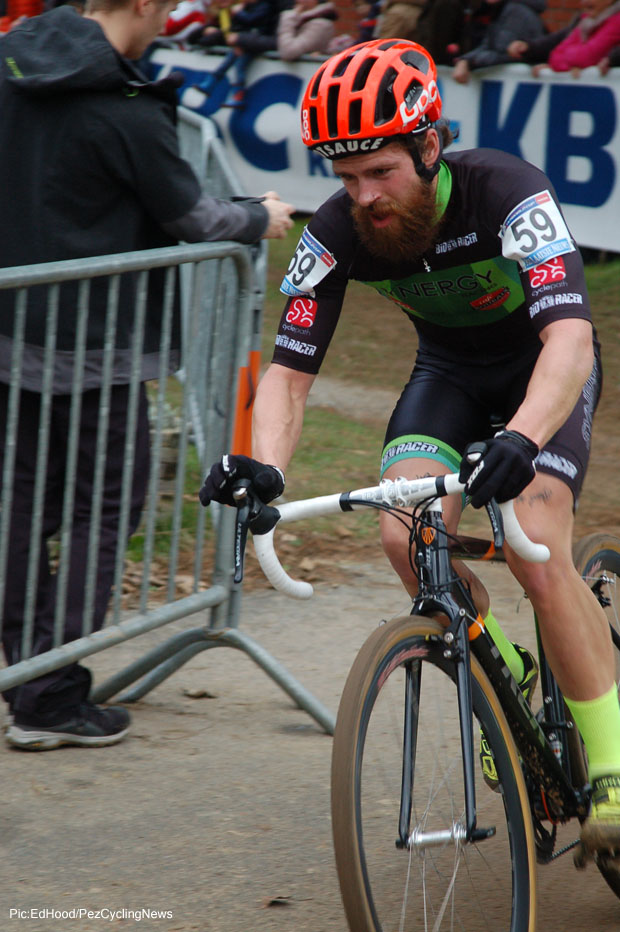 PEZ: Tell us about your hardware; do you have a good enough selection of wheels/tyres for the various parcours – and what about a mechanic?
This season I brought two bikes, two mud tubular wheelsets, one all-rounder tubular set, one sand tubular set and one training set with the wheels largely supplied by Cafe Roubaix. I’m running their awesome new Carrefour custom carbon wheels. I’m also lucky enough to have the support of Luc van den Bergh from pro team Kalas Nnof who is supporting me mechanically this season. He was also there for me in 2012 – a true Canadian patron!

PEZ: What sort of reception have the ‘cross riders given you?
The riders have been either polite or in some cases, quite funny with me. For instance, in Koksijde I was pre-riding near Mathieu van der Poel and asked him how he glides over the sand like he does, he replied, ‘Lots of exercise!’ whilst smiling and laughing. Then at Spa, Klaas Vantornout rode near and I said, ‘Okay, Klaas – are we running mud tyres today?’ He said, ‘No, no, just the Grifos,’ grinningly.’ He then proceeded to drop me in the mud sections – on Grifos which are an all round tyre and not mud specific – and even more so on the climbs.

PEZ: Who impresses you most among the other riders?
It’s cliché but watching Sven Nys ride is like catching a glimpse of a unicorn, only covered in mud and riding a bike superfluously well on a ‘cross course – the man is art in motion. But also to see all the young guns like Lars Van der Haar, Mathieu van der Poel and Wout Van Aert – at their age to be on their level just astounds me.

PEZ: The fans seem to like you.
Put a beard or a moustache on any of us and I think the fans automatically cheer twice as loud and often. Some people still hiss “Sven Nys” or laugh at my efforts to compete against their idols. But for the majority, the public here have been incredibly receptive and welcoming to me being here.

PEZ: What are your impressions of Belgium?
Belgium is no beach but it sure beats back home for training at the moment. It doesn’t drop far below zero here, so it’s much easier to train properly outside this time of year. If I were back in Canada right now, I’d be sweating it out on the trainer while gazing impatiently outside for it to warm up from minus twenty five. 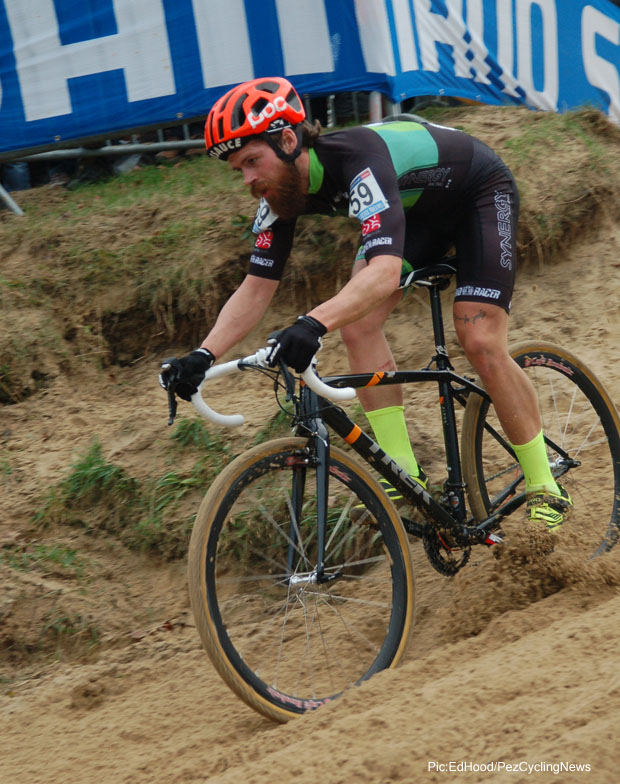 PEZ: How about all that sand at Koksijde?
Koksijde was truly special. I wish I had been able to get out there sooner to preview and ride the course as it takes a real sand specialist to do well there. For a newb like me where we get the odd 50 meter sandbox to play in back home, I felt like I was only just starting to get a hang for things a lap before I was pulled.

PEZ: What’s your favourite type of course?
Flat, fast and dry – basically anything that isn’t in Belgium. But that’s also what I love about racing here. I’m incredibly thankful for the opportunity to get to race against the same riders and courses I idolize from my computer week in and out back home.

PEZ: How many races have you ridden and how many to go?
Since arriving two weeks ago, I’ve raced three times – Koksijde, Spa and Milton Keynes. I’ve been racing back home nearly every weekend since September so I’m taking a bit of a break now to recover from a chest cold and get ready for the Kerstperiode. In the 10 weeks I’m in Europe I’ll be racing around 18 times in total. 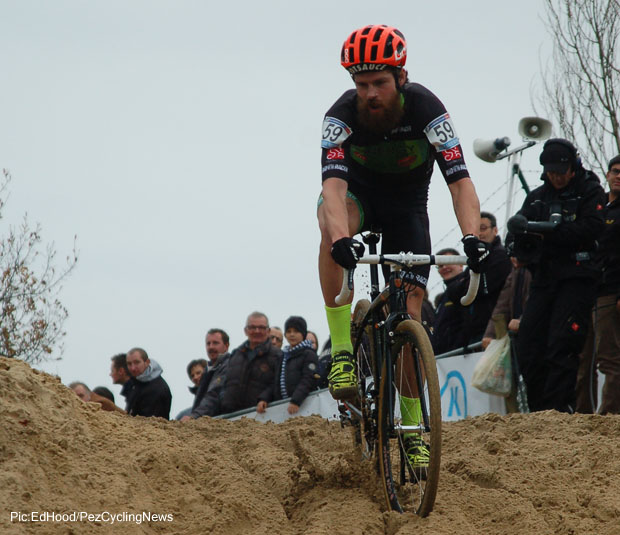 PEZ: Which ride are you best placed with?
My best results as a rider were placed back in the US. In 2012 I won a Cat. 2 race in Pamona, California, the ‘SpookyKross.’ I thought I was onto something, so later that year I ventured to Belgium with Schooler for my debut over here. I got my ass handed to me (and still am), but it was also a wake up and made me realize what being a professional really looked like and what it would take to get there.

PEZ: Are the Worlds on the agenda?
The Worlds are definitely on the agenda. This is my first year representing Canada at the World Championships. Tabor will mark the culmination of my race season in Europe this year.

PEZ: Tell us about that BEARD please.
Let’s be honest – Belgians really dig facial hair. I’m also Canadian and it’s minus 30 where I’m from right now. So I like to think of my beard as part necessity, part accessory, but mostly here to keep those Belgians smiling. I was pre-riding Koksijde before the race and a fan yelled, ‘I really like your beard!’ I told him I grew it just for him and everyone had a good laugh. The Belgians are notorious for generally dead panning foreigners who come to race over here, to have them cheer the way they do, it’s pretty fantastic to have the warm welcome and encouragement. 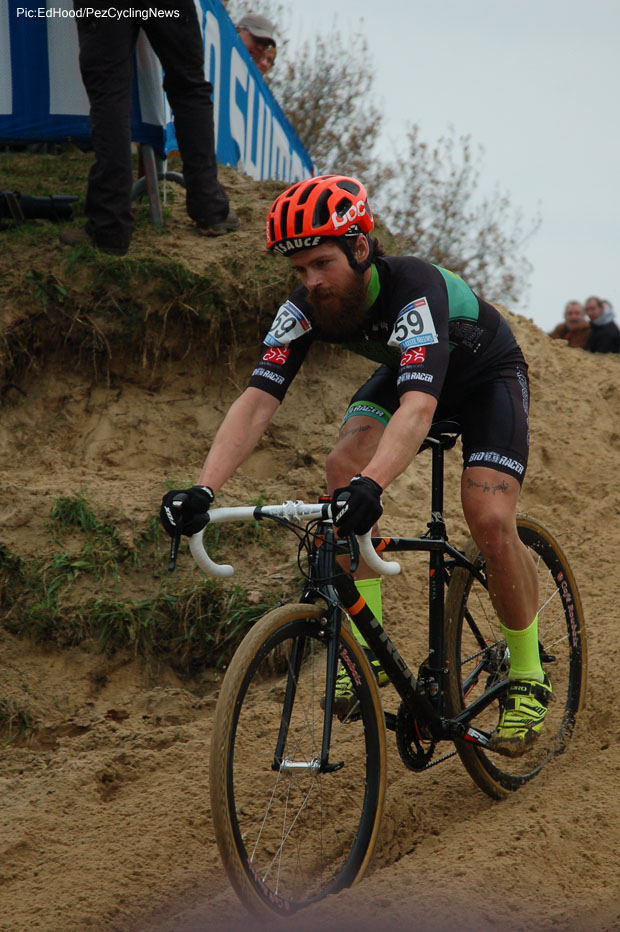 Most of us have dreamed about lining up with Sven Nys; this guy went out and did it – respect. Hot Sauce Facebook and the website are here

Toolbox: Offseason Base or Intensity?

PEZ On The Road with Katusha