Men of the Tour, thus far? Wiggins, definitely; Sagan, for sure; Greipel, yes – and, Michael Morkov. Ed Hood logged a couple hundred kms in the rental car on rest day to catch up with the KOM leader.

The Danish ex-world madison champion and six day star’s stage one breakaway to grab the polka dot jersey and his defence of it for the first week was one of the talking points of the race.

Not content with taking all the available points on stage one, he joined the break on stages two and three to make the jersey his own until the stage to La Planche des Belles Filles where the ‘bigs’ decided to fight it out.

PEZ caught up with him on the rest day at the team hotel in Macon. 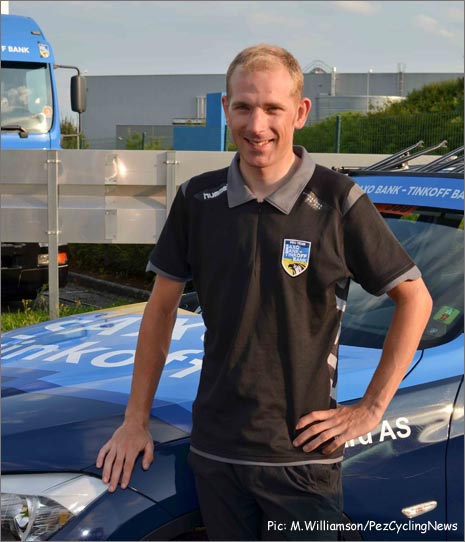 Michael enjoying a well earned rest at the team hotel.

PEZ: Congratulations, Michael – you’ve been the king of the breakaways, this year.

Michael Morkov: Before the Tour, a guy in Belgium worked out that I had been in the breakaway for 1600 kilometres – but it’ll be much more, now. 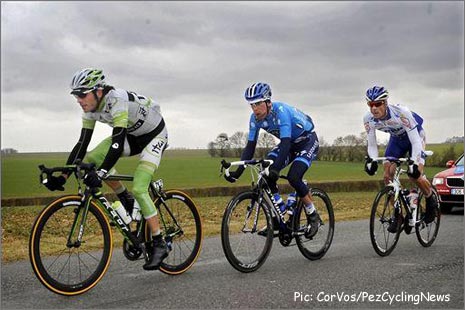 Rain, wind, hills, flat – it doesn’t seem to matter to Michael this year, anytime is a good time for a break! This one is in Paris-Nice.

I was in the break in Dwars Door, E3 – took a rest in Gent-Wevelgem – then was away again in Roubaix. 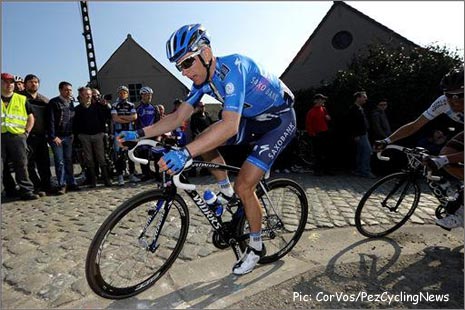 Another day, another break……here Michael is driving the break hard at the Dwars door Vlaanderen

I had a little time off after the Classics and took time to renovate my apartment in Copenhagen.

PEZ: And you took the bronze medal in the recent Danish TT championship.

MM: I’m not a real specialist but I’m decent – and I like the fast equipment, I get excited about riding it. I can concentrate for a time trial and it’s always a goal to get a medal in the Danish championship. 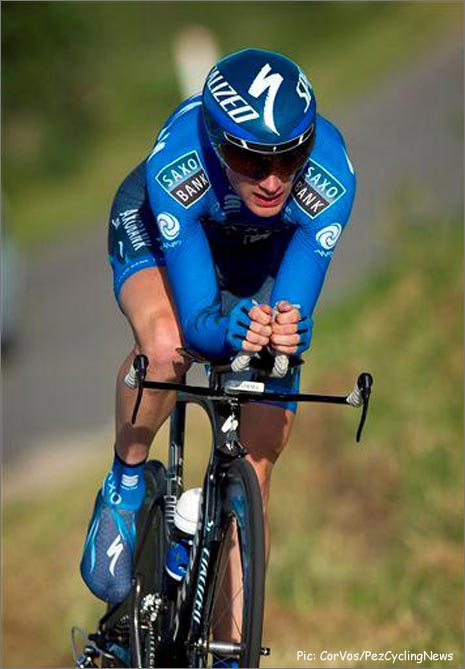 PEZ: Sebastian Lander won the Danish elite road championships – that was a surprise.

MM: It was a big surprise, that was the hardest parcours ever for the championships; it went up a very tough climb, 20 times – there was 3,000 metres of climbing.

It poured with rain for every one of the 200 kilometres and the temperature was down to 12 degrees – I was just frozen by the end. Lander didn’t used to be dedicated but you can see he’s more serious, this year – so maybe it’s not that big a surprise.

MM: When we arrived at the race hotel on Wednesday evening, you could just see that this race is different to all the others. We have two extra soigneurs, two more mechanics and another two directors. The sponsors were here in force – Specialized, SRAM and so many press.

The Tour is very big in Denmark; six or seven newspapers follow the race and each has between one and three journalists. And there are two Danish TV channels here.

With us having four Danes on the team they spend a lot of time around us.It’s all great publicity for the team.

They don’t have the pre-race health checks any more, that’s all done within the teams. I remember when I was a kid looking at the pictures of the guys getting their checks done – you could tell who had the best condition by how skinny they were! 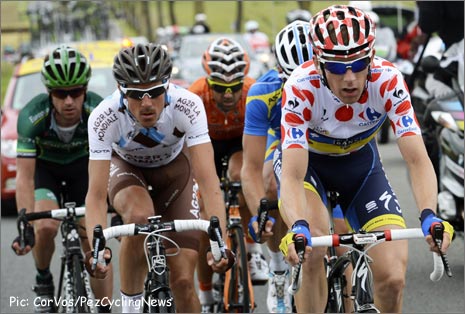 Morkov driving the break during Stage 3 at Le Tour this year on his search for more mountains points.

PEZ: What difference has Tinkoff coming aboard made to the team.

MM: When it was announced that Alberto Contador had signed for three-and-half years that made me realise that Bjarne Riis was committed to taking the team back to the top of the World Tour.

And then when I heard about the Tinkoff sponsorship that confirmed to me that the team will be strong and around for a long time. I liked our original jersey, this year – but I’m getting used to the new one.

I’ve not met Mr. Tinkov but he seems like a cool guy – he talks with enthusiasm for cycling, not just about his investment. He’s promised me a platinum Tinfoff credit card for having the jersey for the week!

PEZ: Tell us about your prologue.

MM: I focussed on it, had maximum power showing on my SRM, felt good on my time trial bike and finished 61st!

It’s a sign of how seriously people take the Tour – usually I’d be top 20 in a prologue. 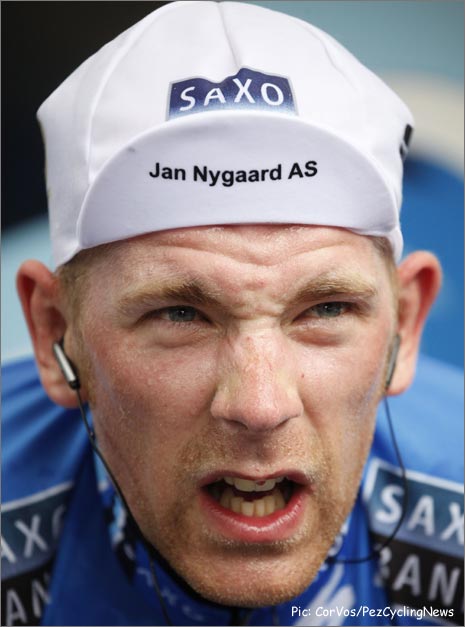 That’s the face of a man who know how to push himself for a tt warmup.

PEZ: The King of the Mountains bid, was it planned?

MM: Yes, but not months before; when I got the race manual I could see that the first stage suited me. The climbs were one or one-and-a-half kilometres long; that suited me – and I have a good sprint, not like the pure sprinters but good enough to win the points.

On stage one everyone was a little nervous, there were just the right number in the break and it worked well. On day two no one wanted to go and there was just one point on offer. I was in two minds whether to go, but all the little points add up.

I asked Bjarne if I could go, he said to wait – then two French guys took off. I asked Nicki Sorensen – he’s our road captain, he’s ridden ten Tours – he said to make my own decision. So I went right after them, the French guys weren’t interested in the point, I got it then did a bit of sitting on and when we were caught, I helped pull for JJ Haedo in the sprint.

On day three it was more difficult to get in the break – I have a secret for how I get into the breaks that are good, but I can’t tell you!

PEZ: Does the polka dot jersey get you respect in the bunch?

MM: For sure, not from the point of view of fighting for position – they don’t even move for Wiggins, Cancellara or Evans. But the big guys show respect, a lot of guys congratulated me on taking the jersey – and Evans came alongside me in the peloton and said; ‘it shows what you can do with good legs and a good brain.’ That was nice. 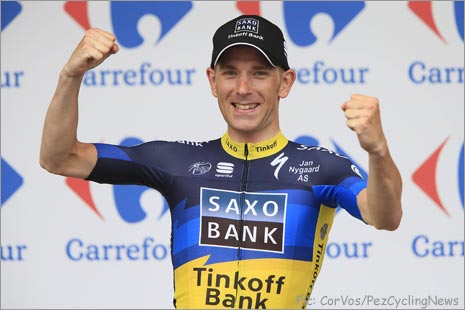 Yes, I did it! A very happy Michael stepping up on the podium to receive his well-earned polka dot jersey

PEZ: How has media interest been?

MM: When I took the jersey on the Sunday it was a big deal in Denmark, it just exploded – the Tour is big in Denmark and the media went bananas.

I was like a national hero, on the front page of the newspapers – that’s usually just for politicians and football players!

As the week went on there was more and more media interest not only from Denmark but from other countries and by Saturday I had international interest.

PEZ: You must have been sad to let the jersey go?

MM: Not really, there was no point in fighting to keep it, I knew it wouldn’t be mine when the big climbs arrived.

I thought maybe I could get it back on stage 8 but that went bananas for the first 80 K and when the break went there were big riders in it. But I can’t think of any other track riders who’ve held the king of the mountains jersey in the Tour!

PEZ: Have you had many requests for the jerseys?

MM: A lot of requests! Luckily, I got a few each day, short and long sleeve.

I’ll give a few to friends and family – but I’m definitely keeping the one with the red dossard as most aggressive rider on it.

PEZ: How did you tackle the time trial?

MM: I went hard, I felt good, I had good legs but I finished in the 60’s. I still have more shots in my gun but it’s mentally hard to lose five minutes to Wiggins.

PEZ: How was your rest day?

MM: It was a really nice day, yesterday was a short day so we were at the hotel early. Today we had a press meet at 10:00 then a ride to a nice cafe – I had a cake, but only small! – then we had lunch, more interviews, massage then we worked with our ‘body science’ guy.

His treatment is different from the soigneurs, he goes deeper, opening up your stomach and chest.

PEZ: What about all the crashes?

MM: I’ve been pretty lucky, I’ve missed them, despite participating in the sprints for JJ. I think the race was more crazy last year but there was that big crash on the descent, this year.

Part of the problem is that all of the GC guys want to have their whole team of eight guys around them at the front – if it was a couple of riders that would be fine – but there’s just not enough space for everyone.

PEZ: You’ve ridden two Giros, how does it compare?

MM: This is bigger – different, the Giro is huge in Italy but there’s so much more attention paid to the Tour.
If you get in a break in the Giro, it’s good – but when you’re in the break in the Tour, it’s amazing!

Nicki Sorensen has ridden ten Tours, and he says this is one of the easiest first weeks he’s experienced – it’s been fast but I’m in good shape and I’ve not been in big trouble.

I’m looking forward to the next week!

# With thanks to Michael for his time and patience, we hope to talk to him again, on the second rest day. #

Polar RCX5 TDF GPS: We Have A WINNER!