By Edmond Hood On Sep 9, 2015
Share
Like PEZ? Why not subscribe to our weekly newsletter to receive updates and reminders on what's cool in road cycling?

The Vuelta a España is in its final week and it will soon be the World road race championships, then the Giro di Lombardia will finish off the season and all we can do is look forward to 2016. But let’s not forget we have the ‘6 Day’ season and cyclo-cross to take us through those days of cold rain and early nights. Ed Hood caught up with a man from cyclo-cross past – Mike Kluge three time World cross champion.

The autumn leaves will fall soon, days will shorten and a young man’s thoughts will turn to. . . Cyclocross!

But wait, let’s go back to a time before the Belgians and Dutch ruled the mud. . . Germany’s Mike Kluge is our man; quality road rider, triple World Cyclo-Cross Champion, top mountain bike rider and equipment innovator – he’s the man who started Focus bikes in 1992. Read on.

PEZ: How many wins in your career, Mike?
Mike Kluge: I don’t know, I didn’t count – it’s something I never did.

PEZ: Why ‘cross?
I did several sports as a young guy – volleyball and handball among them – but I wanted to compete harder; then I saw the Tour de France on the TV when my countryman Dietrich Thurau was the star. My birthday was in September and for that and my Xmas present I received a road bike to which I fitted off road tyres. I enjoyed the off road stuff, I liked that you had to have the ability to read the course, there was much more to think about in a race – technique was the thing for me, I had a passion for that side of things. In races maybe I wasn’t the strongest but tactically I was always good. 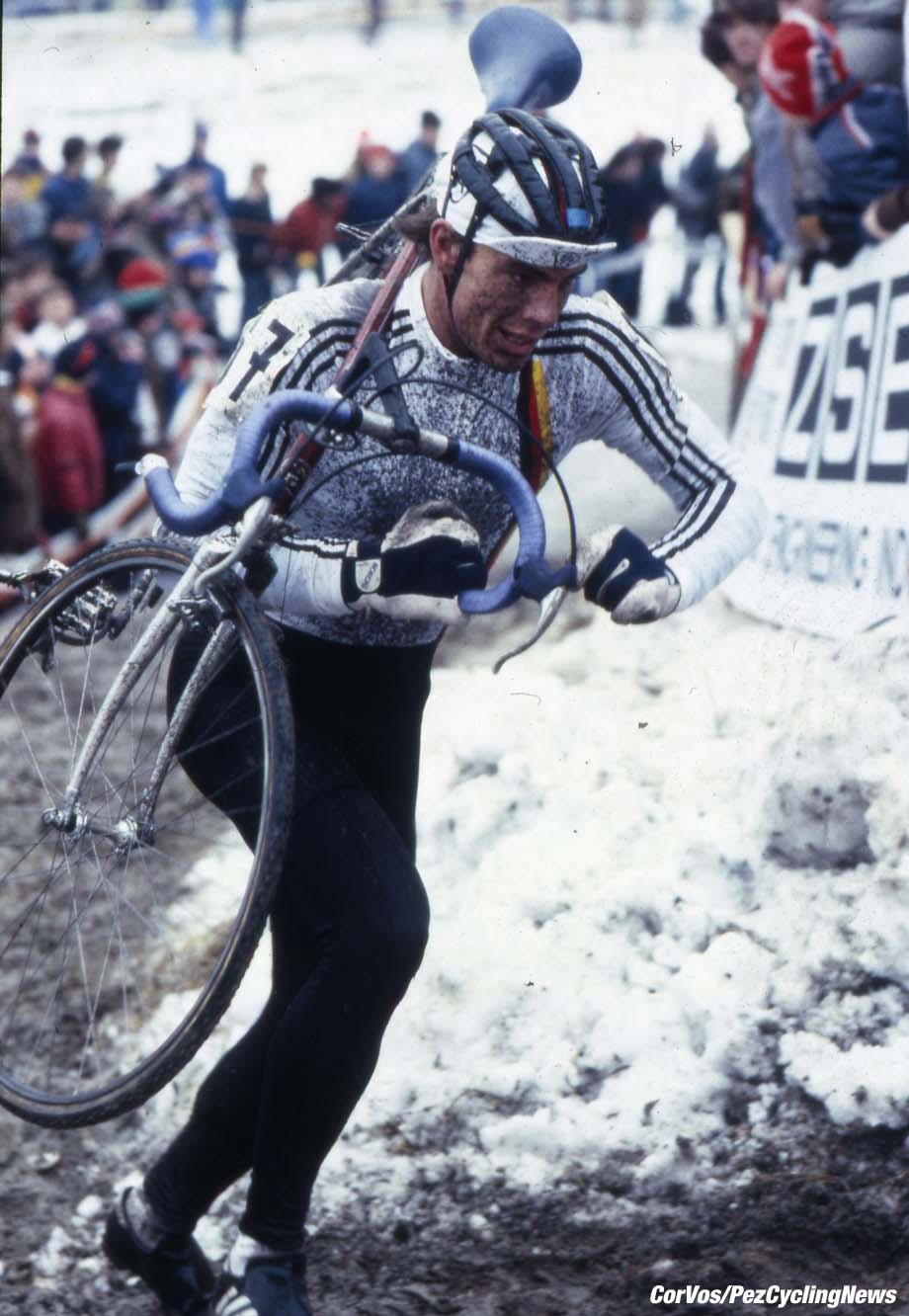 PEZ: Three World X titles, two amateur and one professional.
My first amateur Worlds win was in 1985 and that had a huge impact upon my life; I’d won national champs before in Germany but this was the biggest thing – I was on TV and thought to myself; ‘Mike, you did it!’

In ’86 the Worlds were in Lembeek, Belgium in terrible mud and the tall, skinny Italian with the long legs, Vito di Tano won. The ’87 race was in the Czech Republic and I was back on top ahead of the Czech guys – Roman Kreuziger’s father was third. In ’88 the race was in Hagendorf in Switzerland, the course was through corn fields which were frozen but then it rained so much that the bike became a handicap because you had to carry it through the mud most of the way. I walked a lap with my bike upside down on my shoulder; the fans were spitting at me – and I got into trouble with the German Federation.

That year, 1988 was Olympic year and I was one of the best six or seven road riders in the country but was passed over for the squad to go to Seoul – I almost quit the bike, I felt there was no fairness and was fed up. But I think that because of the controversy surrounding my gesture in the ‘cross Worlds the UCi were spurred to introduce rules limiting the amount of running in a Worlds – the bike shouldn’t be a handicap to you in a world cyclo-cross championship! And later on, the UCI changed the rules – only up to 10% of the circuit should be a running part… 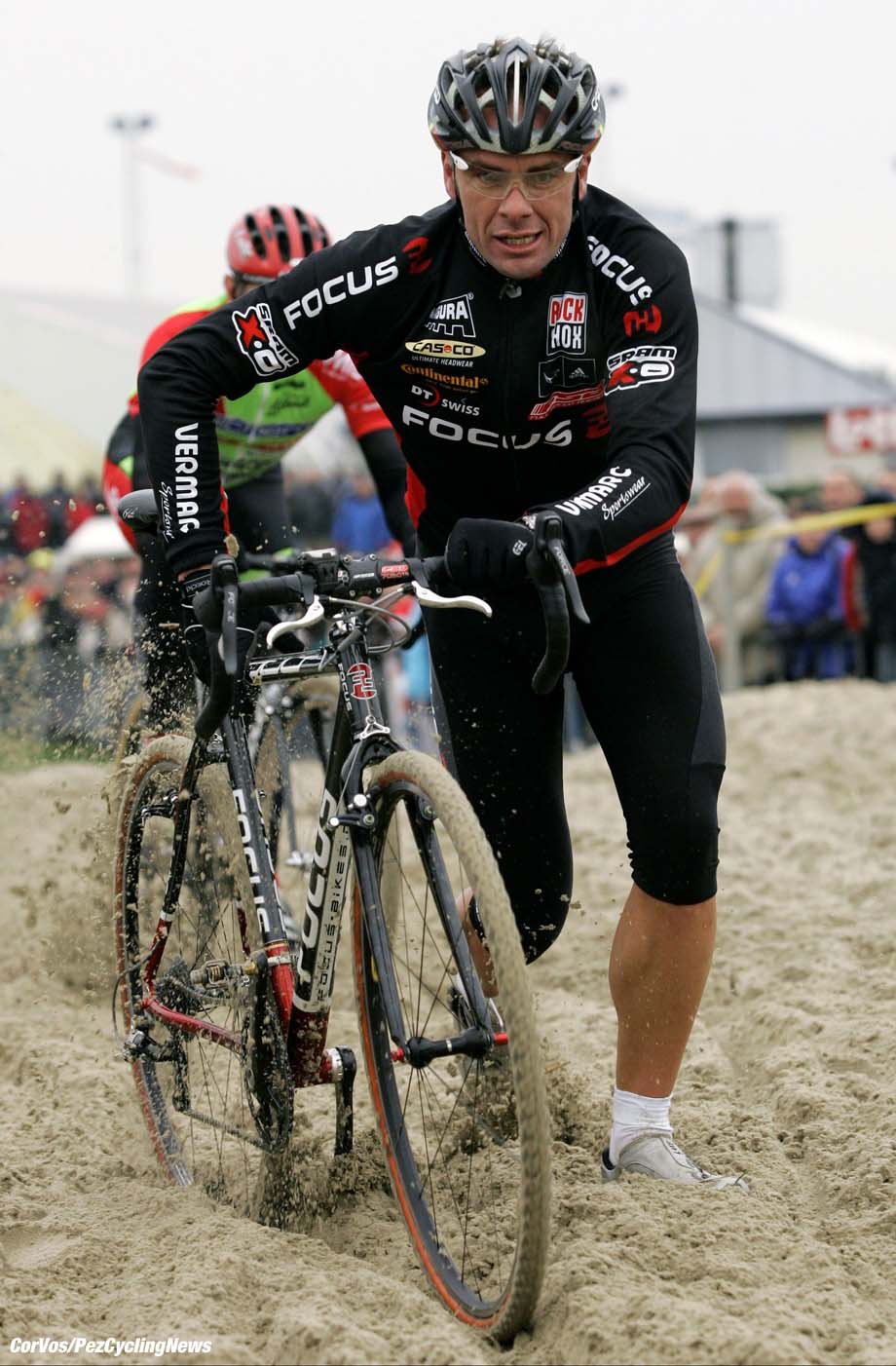 More recently in the ‘All Stars Cross’ Noordzeecross van Middelkerke 2006

PEZ: You turned pro after the Olympics.
I was heartbroken at not going to the Olympics in the road team – I was learning that it’s not easy to succeed in sport. . .

I went for almost a year to California where I was surfing but got calls from Paul Koechli the coach of the Toshiba team and Jan Raas who wanted me for Superconfex-Yoko; both were excited at the prospect of me riding with them but I’d lost belief and told them I couldn’t change my mind. But then Grundig World Cup approached me and asked me if I’d like to ride for them in mountain bike World Cups. I went to bike shops to see what a mountain bike looked like and thought they looked like a better version of a ‘cross bike so I flew to Berlin and signed with them – I had a new sport! I liked that the races were all over the world, as well as Europe – you got to travel to the USA, Australia and South Africa. 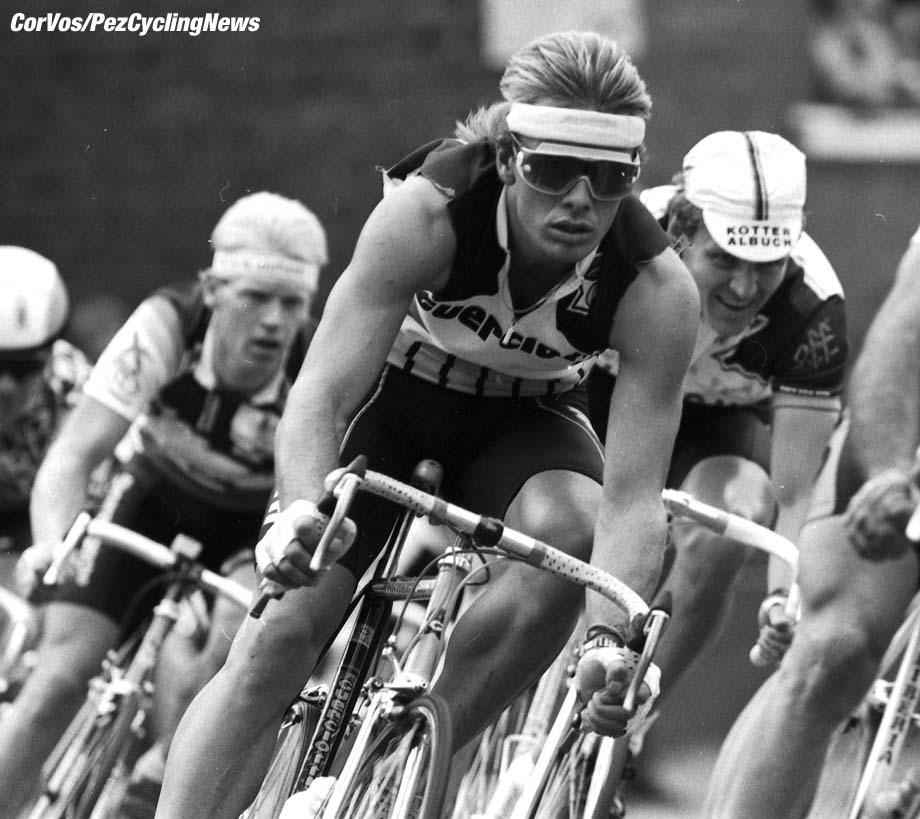 A young Kluge in the Coca Cola Trophy 1989

PEZ: And you came back to win the Pro Worlds in Leeds in 1992.
That win was planned out – everything went to plan and I beat the Czech Camrda and Adri Van Der Poel to win.

PEZ: But it should have been two Pro World titles. . .
For ’93 I signed a contract with Sachs to ride their gears but on their rear mech roller cage they didn’t have the pin that the other gear manufacturers had to prevent the chain from coming out of the cage – and that’s exactly what happened with two laps to go when I was leading by 30 seconds. You know, that the night before the race I had a dream where I was leading by 30 seconds for the whole race and I was thinking in this dream; ‘this is really boring for the fans !’

I was caught and passed by Dominique Arnould and Wim De Vos, I got back to them and passed them by 15 seconds but then the chain unshipped again with 800 metres to go; I got back to De Vos but not Arnould and had to settle for silver – I was so emotional, so disappointed and was sick in bed for a week.

I always wanted to win the amateur and professional titles twice each – but I know in my heart that I should have. . . 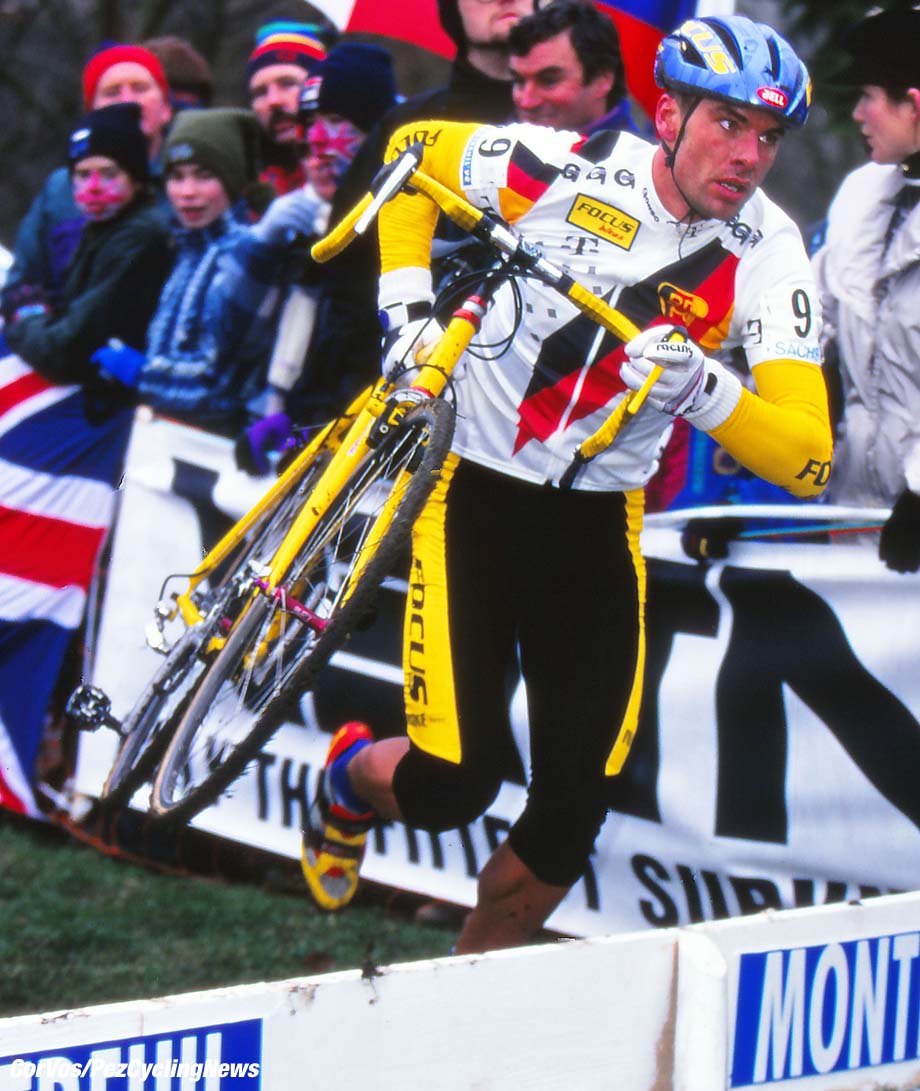 PEZ: What kind of parcours did you favour?
Fast, snowy, ice, slippery, on the edge stuff – I had good ‘ass control’ I could feel what was happening through my butt!

PEZ: You were always an equipment guy – I remember you being one of the first to use hydraulic brakes.
I first used them in 1993; I had to have road bike style levers custom made for them – at that time they only made MTB levers to suit hydraulic and I had those ‘extra’ shifters from Suntour – so I could change gears when holding my brake lever. I was the only one who could stop on a point and stop in the snow – braking is so important. In car racing braking is rated as important as acceleration – and in a ‘cross race you always want to be into that last turn as first wheel so you can brake much later. . . 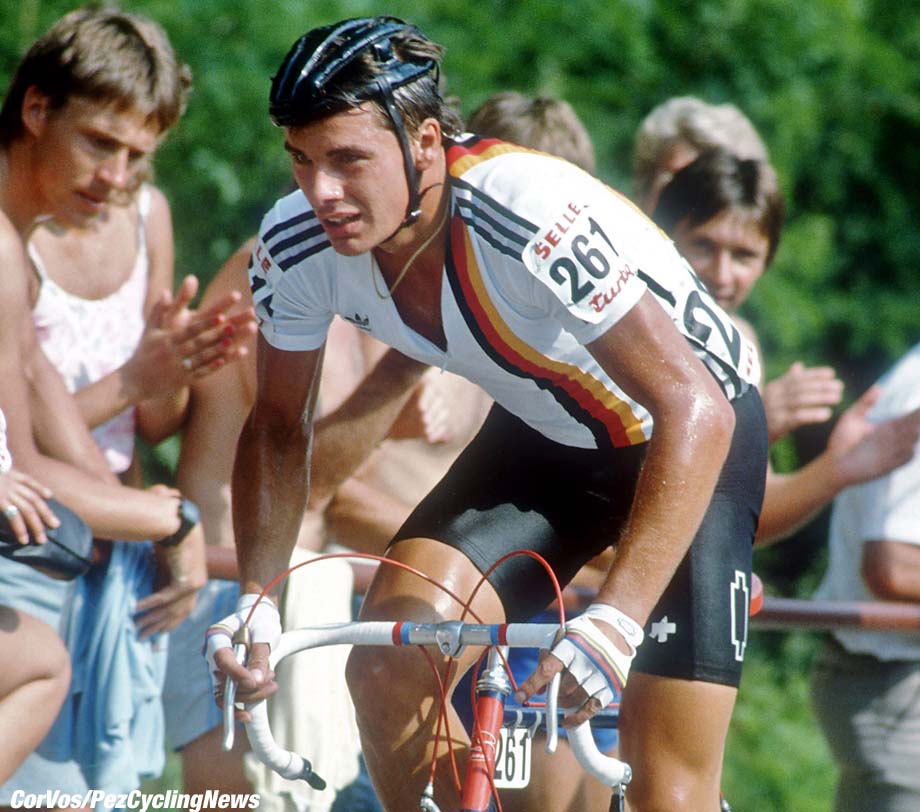 PEZ: And on the subject of equipment; you set up the Focus bike company, didn’t you – how did you find time as a professional athlete?
I had to find time! As a professional I depended upon my equipment; if something is missing then you have to do something about it. The bikes I raced on always had ‘issues’ and with the big manufacturers it would take years to feed through – I needed changes right now!

I raced on Wheeler in the Worlds in ’92 but decided that I wanted my own bikes; it was a big deal because I’d lost my bike sponsor and had to spend all my money. And there were issues over the name with a German magazine called ‘Focus’ and Ford have their ‘Focus’ model. I was going to call it ‘Mike Kluge Bikes’ but then at Xmas I was at my parents’ house taking some pictures below the Xmas tree and I saw the word ‘focus’ on the camera and thought; ‘yes, that’s it.’

PEZ: Did your training change much when you went to MTB?
I always trained a little bit differently each year anyway because I get easily bored and have to do different sports to entertain my head and work other muscle groups – stuff like beach volleyball and tennis. 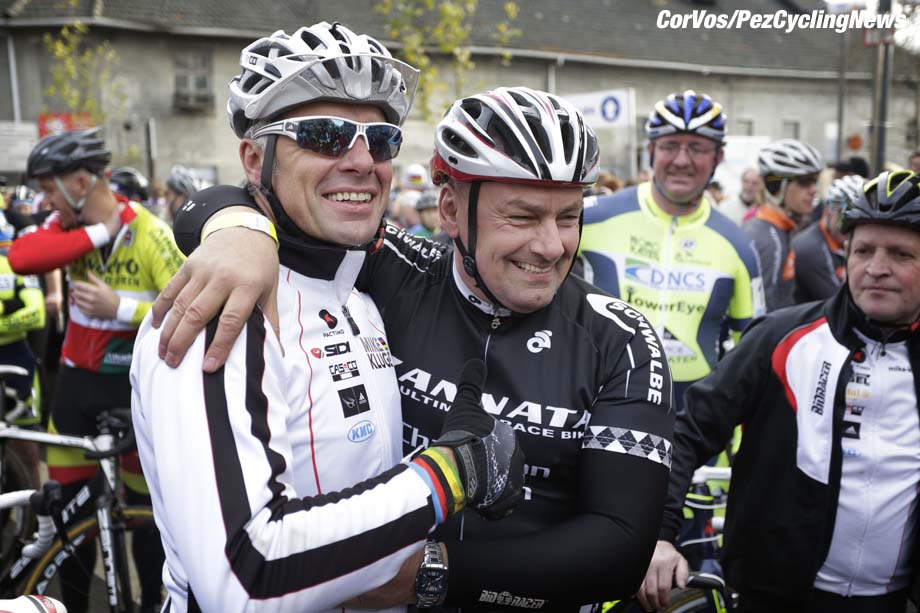 Mike Kluge and Roland Liboton at the Druivencross of Overijse 2013

PEZ: The MTB world must have been a long way away from the pro ‘cross world of the time?
At the beginning the MTB world was an adventure; I’m so thankful that I was around at that time. We’d sit around the camp fire the night before the race and talk – it was really romantic. But it’s not like that now. . .

The whole thing, the travel, the excitement was great. I always viewed myself as an entertainer as well as a racer and the Belgian and Dutch fans used to get really excited when they say me – even if I didn’t win, I entertained them. 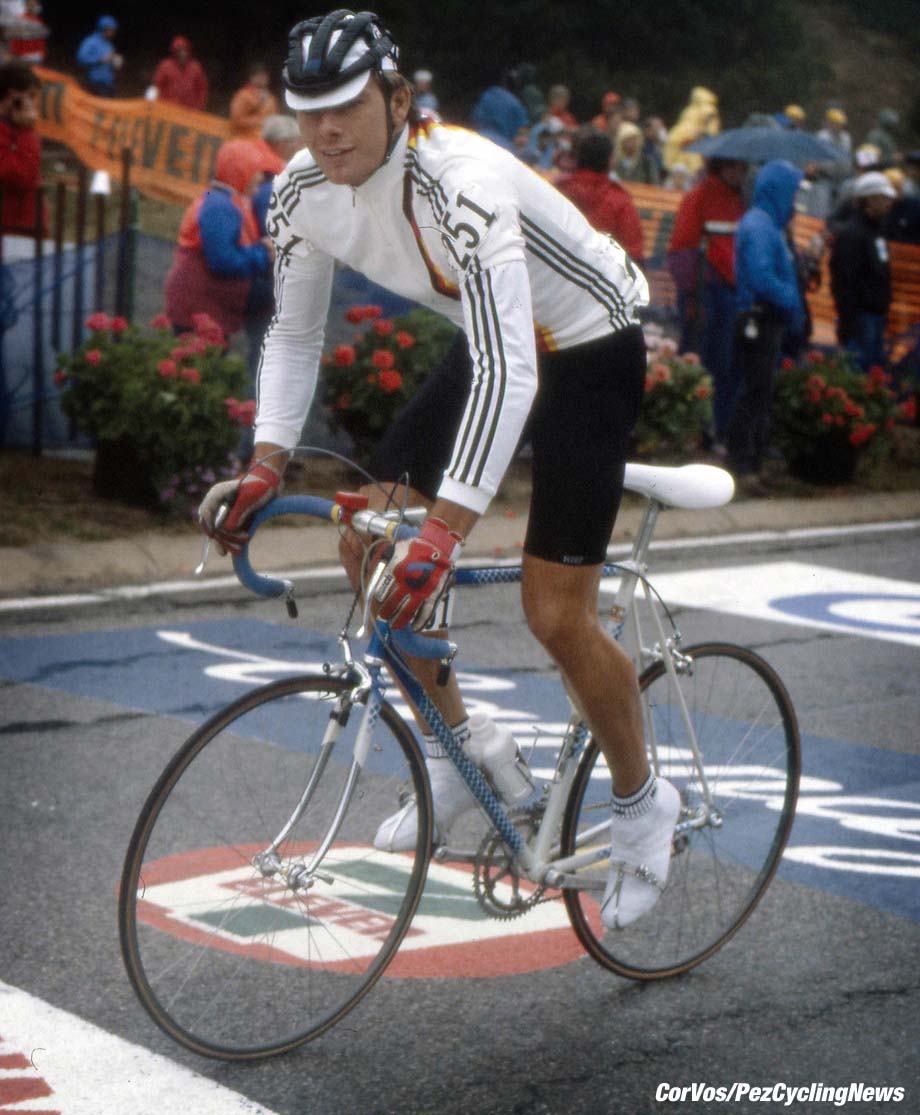 PEZ: Regrets?
I’ve made a few mistakes; if I had a time machine I’d do more media work as a rider and have a personal assistant to help with my “mental training”. I’m a ‘people person’ I like to be with people, not on my own. And – I’d listen to my coaches advice and go to bed earlier!

PEZ: What do you do now?
I still have most of the sponsors I had when I raced; I’m a consultant/adviser to them. I’m good at logical thought and come up with things early – then I’ll someone else will doing it three years later. I’m also back with Focus; it was bought from me by Derby Cycle and belongs today to Pon. It’s my babe and it always will be. Focus is right now on a very good way to the very top. I’m now involved in the E-bike performance Team and this is quite an very exciting project. They are so much fun and made me enjoy again very much riding my bikes. Today, I have good friends, I’m independent, I have freedom – I can pack my suitcase and go when I feel like it. But I never forget that I’ve had bad times; not going to the Olympics was a huge disappointment.

When mountain biking took for the first time part in the Olympics 1996 in Atlanta, I was very excited. But I got a ‘chain suck'(when your chain does not detach correctly from the bottom of your chainring, and instead wraps around the ring until something jams, ed.) and could not continue the race.

And in 1999 I sold my company and stopped my career; the following year my girlfriend died in an accident – everything I had was gone in the space of six months so now I really appreciate what I have and the fact that I’m healthy. 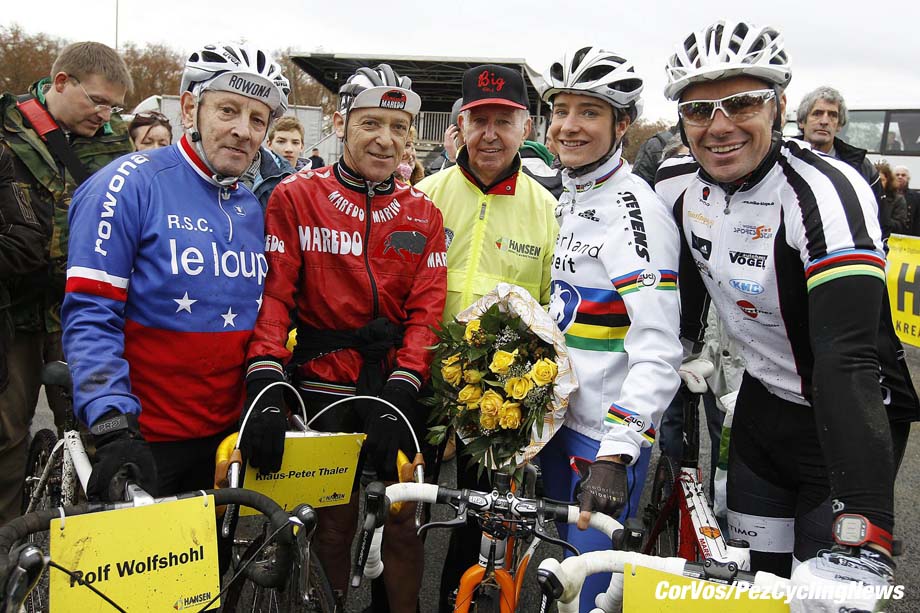