An African team stepping up to the ProContinental ranks and signing some big WorldTour stars? We had to find out more so Ed Hood tracked down the main man of MTN Qhubeka for a chat before the team’s effort in the TTT on Sunday.

One of the positive aspects of the world team time trial championship was that it gave Continental and Pro Continental teams from all over the globe the chance to perform on the biggest stage of all and to pit themselves against the Pro Tour Behemoths.

Australian registered Orica-GreenEDGE were probably furthest travelled, but as a Pro Tour squad their budget is big and the name well known.

Not far behind them in the ‘air miles’ stakes, but not so well known were Republic of South Africa Continental team, MTN Qhubeka.

On the morning of the TTT, MTN Qhubeka’s main man, Douglas Ryder took time to talk to PEZ about the team and its goals for the future. 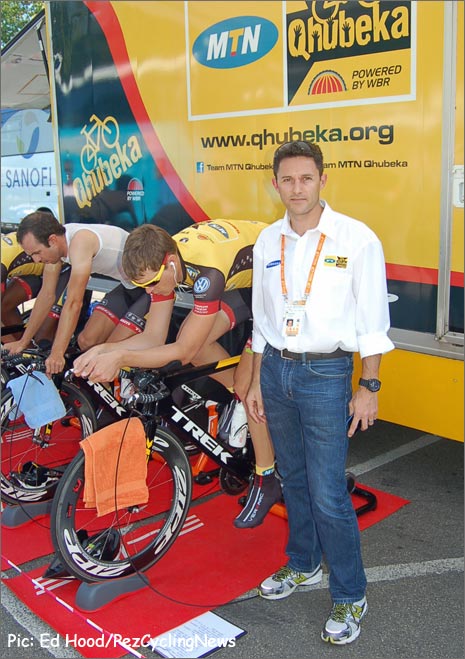 Douglas looking relaxed as his team warmed up for the big TTT on Sunday.

Just prior to the Valkenburg world championships, UCI head of sport Philippe Chevallier confirmed that MTN-Qhubeka (powered by Samsung) will be granted a Pro Continental licence for season 2013, so it’s an exciting time for what will be Africa’s only Pro Continental squad.

We opened by asking Ryder about his sponsors;

“MTN is Africa’s Movistar, if you like; they’re a telecoms company who operate in 21 African countries.

Qhubeka is part of World Bike Relief; it’s a Nguni (Zulu, Xhosa) word that means “to carry on”, “to progress”, “to move forward”. Qhubeka projects aim to help rural communities move forward and progress by giving bicycles to children in return for work done to improve their environment and their community.

Samsung have just come aboard as a new partner, it all fits – they’re about mobility; MTN provide the mobile networks and we want to mobilize the kids. To that end, more than 100,000 bikes have been distributed since 2004” 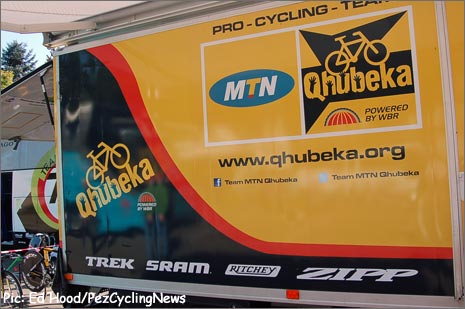 With the team stepping up to Pro Continental and Samsung coming on board, expect a repaint of the team truck soon….

Ryder feels strongly that Africa is the sleeping giant of world cycling;

“If you look at middle distance running, it’s dominated by Kenyans and Eritreans – why can’t they do the same in cycling? The big reason is that they don’t grow up with bikes, like we did as kids. If we can get more African kids onto bikes then we can draw from that talent pool.”

Ryder is proud that the team is about more than selling product;

“We’re one of the few teams in world sport that aren’t just about marketing a product – we’re actually having an impact on people’s lives.”

But behind Ryder’s polished sound bites there are solid statements of intent being made, not least the recruitment of 25 year-old, former world U23 road race champion and Vuelta stage winner, Gerald Ciolek from Omega Pharma QuickStep. 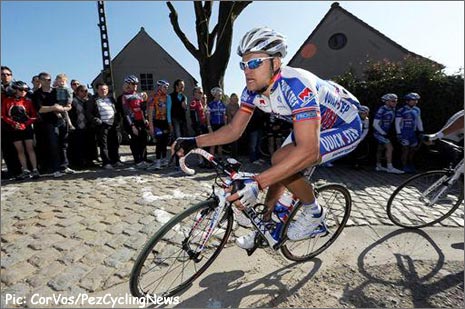 Ciolek is still young, turning 26 tomorrow but he brings a mountain of experience with him to the team.

“It’s not just about his results; we want him as a mentor for the young riders because he’s still young and hungry and doesn’t have the “seen it all before” attitude which some older riders can have. 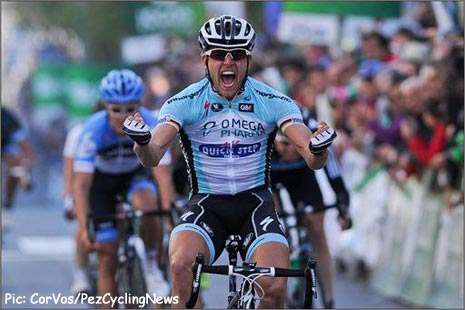 That looks like a man that is still hungry for victories to me.

But not all of the star traffic has been one way; a disappointment for the team has been the loss of Republic of South Africa time trial champion Reinardt Janse Van Rensburg to Argos Shimano for 2013. 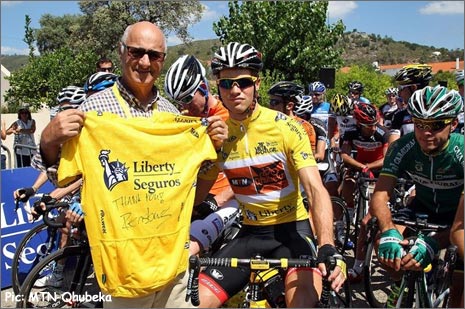 Van Rensburg pulled off some great victories this year including the prologue in the Volta a Portugal where he’s pictured here at the start of Stage 1.

With results like that a move to the Pro Tour was inevitable and Argos Shimano have snapped the 23 year-old up – Ryder is philosophical;

“When the big teams approach a young rider with their buses and big budgets . . . ” 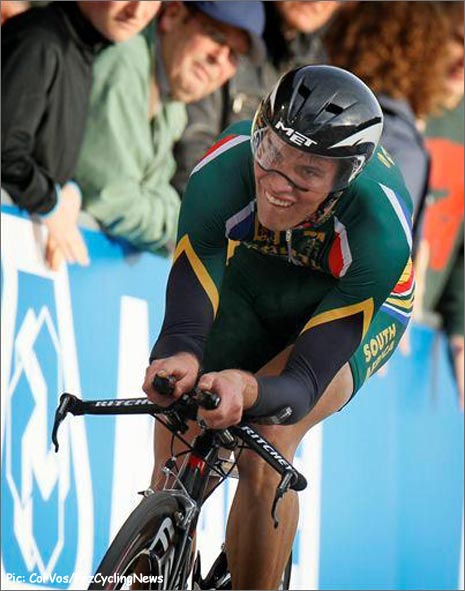 Van Rensburg will be time trialling against MTN-Qhubeka next year but Doug still has lots of African talent to draw on for his team.

But it’s not just riders where the team has been busy recruiting, Ryder explains;

“On the management side there’s a big influence from the former Cervйlo TestTeam; we have Jens Zemke as head sport director and Thomas Campana as manager.

Brent Copeland has also joins us as a sport director – he was with Lampre and was Cunego’s coach.

These guys are all well connected in the European peloton and have enabled us to recruit the talent we have. Ex-six day rider Jean-Pierre Van Zyl will oversee the MTN-Qhubeka feeder team, which we’ll be run in partnership with the UCI World Cycling Centre.

That squad will race on the African calendar with African riders.” 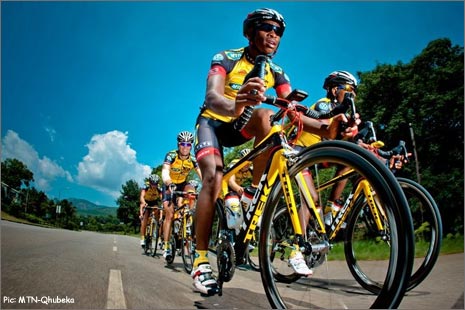 An international programme is important to Ryder;

Because MTN are in it primarily to support African cycling we’re not bound by constraints that we have to ride in this market here, or there.

No Pro Continental team really knows their programme for 2013 but we’re hoping to ride in Langkawi, in San Luis in Argentina, in the UK – all over the world.”

The theme of the team’s African identity and progression runs through all of Ryder’s conversation;

“We’re the first African Pro Tour team – you can cite Barloworld, but that was a UK registered team with Italian management.

MTN Qhubeka is the first bona fide African team to register with the UCI. They’re delighted that we’re pushing forward – it fits perfectly with their vision of globalising the sport.”

And riding the Worlds?

“We’re here as the number one UCI team in Africa to get exposure – we don’t know how the TTT will go, today. 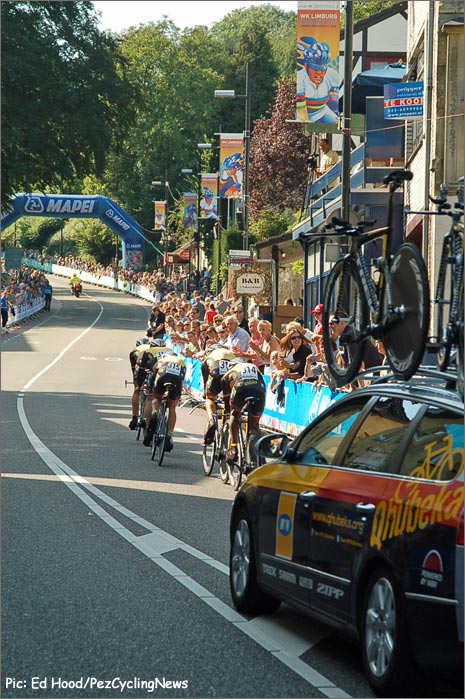 The team starting the drag up the Cauberg on Sunday. With the step up in divisions they’re going to have to get used to many of the famous bergs in WorldCycling.

The team was by no means disgraced, riding to 23rd place from 32 teams; just behind FDJ and Cofidis but ahead of the likes of Lampre and Rabobank Continental.

Not a bad baptism of fire.