As German Pro Continental squad NetApp pitch for a wildcard place in the Giro, it’s perhaps good karma for them that 2012 is the tenth anniversary of their DS Jens Heppner wearing the maglia rosa for ten days during the 2002 Giro. The Tifosi loved him, calling him ‘osso duro’ – ‘hard bone!’ Ed Hood recently caught up with Heppner…read on!

Heppner came out of the old East German sports system; he was in their winning world junior TTT squad in 1982 and took second in the Tour of Cuba in 1984 before a change in the political climate enabled him to turn professional for Panasonic in 1991.

He recently took time to talk to PEZ about his career and his NetApp squad, where 24 year-old Czech Leo Konig set tongues wagging last season with second in the Tour of Austria, third in the Tour de l’Ain and fifth in the Tour of Britain.

PEZ: You were world junior TTT champion in 1982 – does that make you feel old?
Jens Heppner: That was my first big win and it was 30 years ago, but I still don’t feel old, the time has passed very quickly. 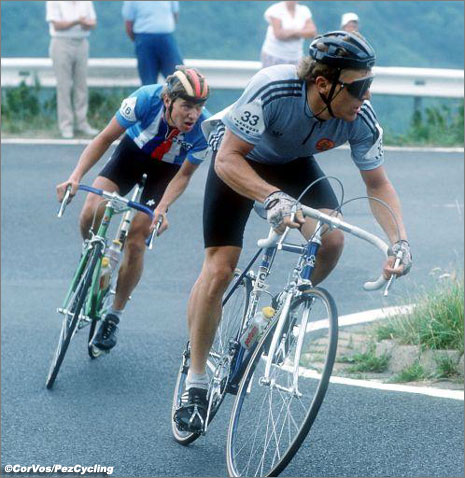 Heppner early in his career racing for the DDR.

PEZ: As a young rider you were second in the Tour of Cuba – that’s a hard race which the South Americans don’t like to lose, can you tell us about it?
Jens Heppner: Yes, I was very young back then and the people in charge of the national team at the time didn’t want me to participate because I had been ill for a very long time before.

My coach supported me and so I was still able to compete.

We had already been training in Cuba three weeks before that and every day I noticed that I was getting better.

I could also have won my first Cuba tour, but the Cuban spectators were supporting their hero Eduardo Alonso pushed him to the summits.

On the feared mountain Gran Piedra, which has sections of 25%, the spectator support for Alonso was simply too great and too unfair.

I was in the lead 500 m before the finish and there was nothing behind me, but the spectators pushed Alonso past me – it really was organized that way then.

But I was young and happy that I had come in second. 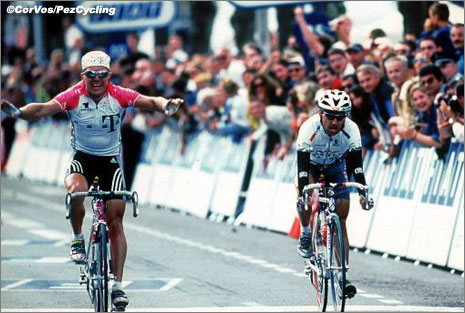 Heppner triumphing in a stage of the Tour de France.

PEZ: You raced with Panasonic in ’91 – how did that come about?
Jens Heppner: In 1991, I was with Panasonic Sportlife. In 1990 I came in 4th at the Amateur world championship in Japan and after that decided I wanted to become a professional.

I got myself a manager and drove from Gera in Germany to Amsterdam in my Trabant (max. speed 100km/h) to meet Peter Post (Manager of Panasonic).

Olaf Ludwig had already been there for a year and he also put in a good word for me – I rode together for 10 years in Gera in the same club as Olaf.

Peter Post and I hit it off right away and from then on I was in the business!

PEZ: You were with Telekom for ten years, it must have been hard when they let you go?
Jens Heppner: I actually rode for Telekom for 11 years; that was a great time.

When team manager Godefroot told me after the successful 2002 Giro that I had to leave Telekom because I was too old, it was like a slap in the face.

Even now I can’t understand it, despite being 37 at the time; I still counted among the five top performers on the team. 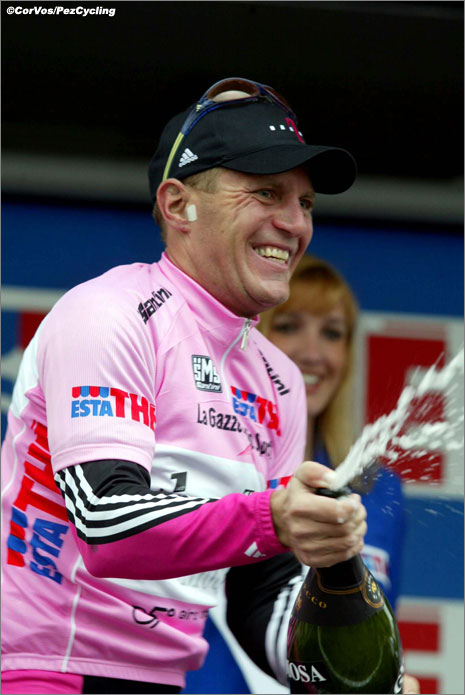 The ten days in the Maglia Rosa during the 2002 Giro were a highlight of Heppner’s career.

PEZ: What was it like going to Wiesenhof after being with one of the biggest teams in the world?
Jens Heppner: It was a wonderful time; at Telekom, we were really spoiled, everything was luxurious!

At Wiesenhof I was brought back down to earth, which was very important for the rest of my life.

For three years, I had the chance to reintegrate into a normal life and to gradually reduce my training schedule.

There we had fewer races, and they weren’t very difficult.

It was through my friendship with Enrico Poitschke I got the chance to transfer to Wiesenhof – he was the team captain then, and is now the Sport Director at Team NetApp together with me. 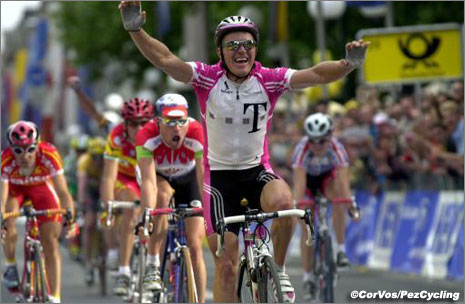 Heppner wasn’t a prolific winner, but he got the chance to throw his arms up on more than a few occasions.

PEZ: With Wiesenhof you were at the kind of races you rode as a young rider – Langkawi, Giro del Capo; what was that like?
Jens Heppner: Because of my age, my professional days at Wiesenhof were numbered, but I was able to pass on my training and riding experience to the young athletes, which was great fun.

At the beginning, it wasn’t easy, since the young riders didn’t want to take on any responsibility and always relied on me.

At some point came the initial successes of the youngsters and all at once I was just their domestique.

That was also a character trait that the young riders were unfamiliar with and had to learn to understand. 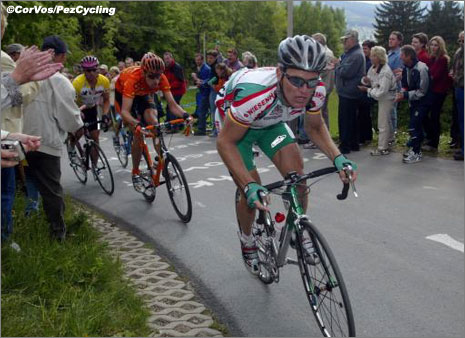 PEZ: You were still competitive when you retired, why quit?
Jens Heppner: I was 41 when my racing career came to an end. Of course I could still have raced for a good few years.

But in the last few years I was having trouble getting motivated and I was always an ambitious professional, I didn’t know how to handle insufficient training.

As a result I was going into races in poor condition, and besides, that wouldn’t have been a good role model for young athletes.

PEZ: You had a management role at Wiesenhof in 2006/7 – what was that like?
Jens Heppner: Raphael Schweda and I managed the team together; it was a difficult task, since our budget was very small and some co-sponsors didn’t fulfill our contracts.

PEZ: Where were you between Wiesenhof and NetApp ?
Jens Heppner: After Wiesenhof, I developed my own bike brand “Levrier Bikes” and worked as a representative for the Belgian sport clothing firm Bioracer; which I’m still doing as well as my bike brand and Team NetApp. 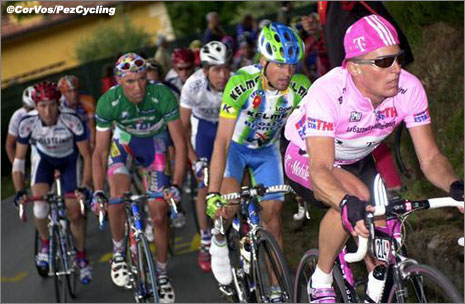 His days in the Maglia Rosa were great, but that huge success was followed by the disappointment of not being resigned by Telekom at the end of the 2002 season.

PEZ: Ten days in the maglia rosa – that must have been amazing? the best result of your career?
Jens Heppner: Of course the Giro was one of my greatest successes. Wearing the maglia rosa in front of the tifosi is simply indescribable.

It was a special and unique feeling that still means a lot to me, especially also because I was able to enjoy it for 10 stages.

But also the years when I was on the Telekom team with Bjarne Rijs and Jan Ullrich rolling through the Champs Elysйes for the winners’ ceremony are unforgettable too; I still get goose-bumps when I think about it. 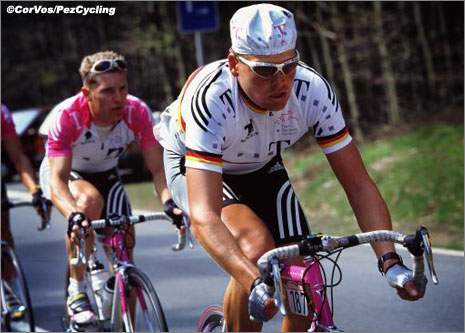 PEZ: You had some great wins: the German Championship and Tour of Germany – but any regrets about races you would like to have won?
Jens Heppner: I would still liked to have won a classic; I came in second twice in the Henninger Turm and third once at the Amstel Gold Race – I would have liked to have won that. 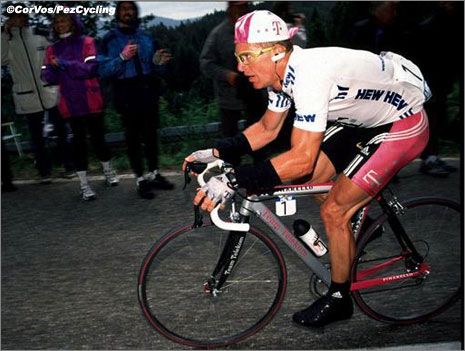 PEZ: What values do you try to instill in to your riders at NetApp?
Jens Heppner: I’m trying to make the young riders understand that they are at the point where they earn money with their hobby and that they can make even more money with it.

They must understand that they have given up their entire youth for the sport and now they can reap the rewards.

They must learn responsibility and how to deal with pressure – if they understand that, successes will soon follow.

The most important thing is that they never lose their enjoyment of the sport and that they don’t just do it for the money!

PEZ: Do you find young riders respectful in the modern era?
Jens Heppner: On our team we deal with each other very respectfully.

Our team philosophy is explained to each new rider during the first training camp; Team NetApp adheres to certain values in its pursuit of top performance; team spirit, commitment, honesty and openness.

These values are embodied by our main sponsor NetApp, and are also a requirement for us if we are going to successfully travel the road to the World Tour.

Since I no longer ride in the peloton, it is difficult for me to say what everyone’s behavior is like; there is always this story and that – what is important to me is that our riders always behave with respect, because we give them that on the road. 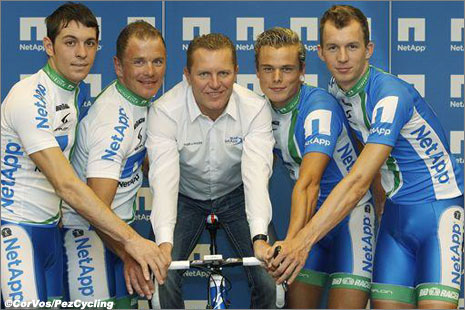 The up-start NetApp team has made a splash and looks to continue its upward trajectory in 2012.

PEZ: You have good invites: San Luis for example, how do you organise the programme?
Jens Heppner: Our Team Manager Ralph Denk works very hard to get a good program for the athletes.

He applies himself to a lot at races, introduces himself to the organizers in order to present the team philosophy and get us nominated.

Of course the German market is still interesting for many organizers, which benefits us as the only German Pro Continental team.

PEZ: Leo Kцnig, how far can he go in the sport?
Jens Heppner: Leo is of course an exceptional talent. I think that with good guidance he could in the top 5 in the Tour de France or the Giro d’Italia. 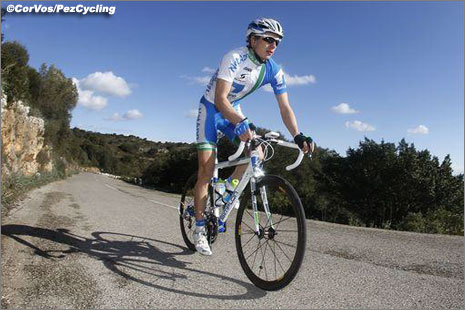 PEZ: And are you still ‘osso duro’? (hard bone)
Jens Heppner: I think for my age, I still am!

***
With thanks to Jens and Mieke Eschment and wishing them success with their Giro dreams.