Mission Viejo, Sunday July 29th 1984 and Alexi Grewal wins the 190 kilometre Los Angeles Olympic road race for the United States in front of an estimated 300,000 home fans. It should have been the start of a magnificent career for the talented man from Aspen Colorado, but it didn’t work out quite like that.

Despite contracts with some of the best teams of the era – Panasonic, 7-11 and RMO – and flashes of brilliance, his Euro career never caught fire and he returned to the USA.

The wins came there, but to knowledgeable observers, his was always an example of unfulfilled genius.

When a PEZ reader pointed out to us that Alexi was on the comeback trail we just knew we had to talk to him.

With the help of mountain bike pro Steve Tilford, we finally got our man.

To say that Mr. Grewal was a tad ‘spikey’ in his younger days is putting it mildly; take this anecdote – manager to Alexi after his rider has just pulled off a big win; ‘great ride, Alexi!’ the reply snaps back; ‘how would you know?’

It was no little trepidation then, that I dialled the number.

PEZ: Alexi, thank you for speaking to us; even before the ’84 Olympic road race win you had good results, stages in the Avenir and GP Tell in ’83 – did you get pro offers?
Alexi: I did some good rides amongst those guys, yes; but in the GP Tell I won a mountain stage then on another day I’d lose 20 minutes – I was too inconsistent. 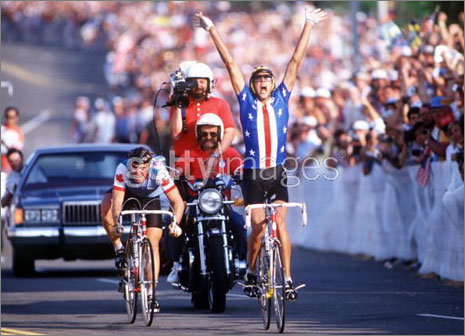 PEZ: Eddy B was in charge of the US regime going into LA, how big an influence on you was he?
Alexi: Eddy brought us to races and organised us; from that point of view he was invaluable but I abandoned his training schedules pretty quickly.

They were too structured, too many intervals – I hated it.

I went back to my old coach Ernst Kappeli his ideas were much simpler; ride a lot, sleep a lot and eat a lot of good food – that’s a more traditional approach.

PEZ: LA was your most famous win but do you regard it as your best?
Alexi: It was certainly my smartest win, I got the others working against each other and profited from that.

But in terms of athletic achievement then it would be the stage win I took in 1992 in the Du Pont Tour on what’s known as the Richmond circuit race, I went off on a long solo break and won, no one could get me back, not even PDM.

PEZ: Your LA win got you a contract with Panasonic for 1985.
I never should have taken it! The initial approach didn’t come from Peter Post; it came from a guy in the States (George Taylor) who had a Dutch background.

We talked it over, but I made the jump without thinking, I’d led a very sheltered life before Panasonic, and I was simply on a different page from them.

I got so sick at the Vuelta that I decided to go home, I could barely get out of bed, I had hepatitis and I asked myself; ‘what am I doing here?’

I was a kid among men; I could handle it now, mind you.

I got a few results, I was up there in a few mountain stages but by the end of ’87 when I was with RMO I knew that I couldn’t have a continental career, it just wasn’t going to happen.

I don’t know if I’m a manic depressive or what, but I pretty much quit the sport by mid ’87, I’d gone to Greece and drank Ouzo!

I came home late in ’87 and was down to my last few bucks, I was 24 years-old and a high school dropout; if you’re a coal miner then that’s what you do – I was a bike rider so I got a start with a domestic team.

PEZ: You have a good US palmares – Bisbee, Redlands, that Du Pont stage, the Bob Cook…
Alexi: I won most of the good domestic races, I kept winning, but I had mediocre results and bad results, too.

I had bio-mechanical problems, my left leg is nearly an inch longer than my right one, I had nerve damage in my foot and I had hip and back problems – I felt that I was worn out at 32 years-of-age.

My manager wanted to half my salary for the next season because I wasn’t winning and it was just time to stop.

PEZ: Did you consider being a DS or maybe a media pundit?
Alexi: I had those sorts of considerations, but in terms of personal relationships I wasn’t an easy person to get along with – but that’s a lot of years ago.

I was abrasive and I remember someone saying that I was the sort of person that if you were in a lifeboat with, then the others would hope I’d swim off to get help!

But this person is 17 years removed from that one – I’ve had a lot of different experiences since then and I am a more complete person.

PEZ: Your dad is Indian; tell us about your trip to India.
Alexi: It was partly to see family and also to do a recce; there are things I’d like to do there, but that’s in the future.

I walked in to the Indian Cycling Federation office in Delhi with no appointment – that’s bad protocol in India – and said to the guy, ‘I’m Alexi Grewal,’ he replied, ‘I know who you are!’

I said that I was there to find the Indian Eddy Merckx; he smiled and replied, ‘good luck!’

PEZ: And what about life since ’94?
Alexi: I got married, had two kids and then got divorced; I’ve been a stay at home dad; I’ve worked in telesales in a hermetically sealed building where I hoped every day that I wouldn’t shoot myself – but then I started to work with my hands.

I’m a skilled carpenter now, I built traditional homes – I had ten years of that.

I’m involved with my community – Loveland, Colorado – and I’m a church minister to the homeless.

I’ve been within a hair’s breadth of being homeless myself, so I understand – for the last decade I’ve been one step away from the street.

I’m active on the City’s civic side; sometimes I’ll be with the homeless guys at the soup kitchen then putting on a suit and tie to go to a mayoral debate.

People say that bike racing is hard; it’s not – you train four or five hours each day and eat as much as you want.

If you’re living on the street then you’re eating out of garbage cans.

PEZ: Have you kept abreast of the sport over the years?
Alexi: For the last ten years, yes. I’ve mostly followed the Velo News online journal.

When Lance started his Tour winning sequence, I was surprised – I managed to convince my favourite bar to get a TV and tune in to the Tour whilst I sat drinking Scotch! 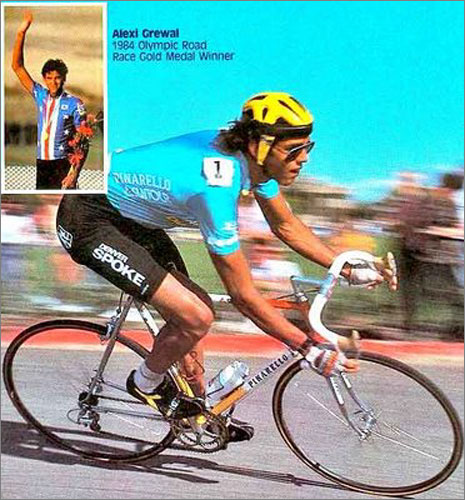 PEZ: The comeback, why now?
Alexi: There’s a political reason, I’d like to attract the Quiznos Pro Challenge to Loveland – but it’s also something I’ve been thinking about for 15 years, coming back when I was 50.

I see my 12 year-old son every day, but when I was living in a shed for two years – there was no plumbing, no heating – and I was broke, he’d come to see me every weekend and we’d go to a movie.

We went to see a film called ‘The Rookie’ about a guy who doesn’t make it as a baseball player but after 17 or 18 years as a teacher he discovers he can still pitch and comes back to the Majors, late in life.

After watching it we didn’t say anything, but I knew what he was thinking, I said to him; ‘don’t even think about it!’ but the seed was planted.

When Armstrong started to Twitter about the Quiznos race, people saw it and were saying to me; ‘are you going to do the race?’

I said that I’d train for four weeks and see how I was going.

PEZ: I’ve heard that you’re in good shape?
Alexi: After four weeks I rode a 90 mile Gran Fondo event on my mountain bike, wearing my hiking boots – there was a lot of dirt road and a lot of climbing.

When the first ten guys stopped at one of the checks to take on food, I caught them; it wasn’t like they were trying to drop me but they weren’t going slow either –but at the finish there were only three guys in front of me and they were all on racing bikes.

On the strength of that I’ve persuaded folks to give me parts and I’m back doing four hours each day on rolling terrain.

It’s for fun, I still do a little carpentry and tree work part time but the country is in the middle of a serious depression as far as the building trade goes and I’m still eating at the soup kitchen.

Two sets of people have approached me to do a documentary but there’s nothing agreed, yet.

I have $300 dollars to my name and the rent is paid a month in advance, so things aren’t so bad.

PEZ: Do you think you got the best out of yourself as a rider?
Alexi: No way! It was the best I could have at the time but if you were to put me of today into that body of then things would have been a lot different – I’m a much more complete person and I can deal with stress much better.

PEZ: With hindsight, what would you have done differently?
Alexi: I wouldn’t have left Len Pettyjohn; he nursed me through a lot of hard times.

We should have built a team over four or five years and then gone to Europe as a US team like 7-11 did.

I should have stuck with Len and viewed my career as a 10 year project; I think that’s the only change I would make.

***
The man is different, that’s for sure; PEZ will be keeping abreast of his comeback – and did we mention that he wants to ride and finish the Tour?