Rider Interview: There are a lot of new, young riders coming up through the ranks, just like the Yates brothers. The next could be Welshman Owain Doull, he already rides for the Irish Continental team: An Post-Chain Reaction and has a string of top results in his palmarés. The next generation.

‘Owain Doull’ is a name that you don’t forget; but lyrical names are commonplace in ‘Cymru’ – ‘Wales’ in the native tongue of the land of valleys and song.

Mr. Doull’s name has been cropping up ever more often in cycling results at the highest U23 level on the road and Elite level on the track.

British National Points Race Champion in 2011, he was a member of the GB team which won the European Junior Team Pursuit Championship the same year.

Doull took the British Elite Individual Pursuit title in 2012 and in 2013 with the GB squad took the European Elite Team Pursuit title as well as landing World Cup wins in the team pursuit at Manchester and in the scratch race in Aguascalientes.

Last season also witnessed his breakthrough on the road with strong showings in the ZLM Tour in the Netherlands, Fleche du Sud in Luxembourg and Ras in Ireland riding for the GB team and UK domestic squad, 100% ME.

This year that road progression has continued with AN Post; fourth in the U23 Tour of Flanders and an excellent GC win in the showcase Triptyque Monts et Chateaux stage race in Belgium.

The Tripyque is an important shop window for the big teams’ talent scouts and winners in recent years include Bob Jungels, Lars Boom, Tom Dumoulin and Stijn Devolder.

When Doull took two fourth places on the track at the recent Commonwealth Games in Glasgow, PEZ thought it was time to ‘have a word.’

PEZ: How did your ride with the AN Post Continental team come about, Owain?
I was keen for a change of scene and to step away from the GB U23 academy to get a bigger race programme.

I knew a few lads on the team already and I got chatting to the manager, Kurt Boegarts at the Tour of Britain and it went from there.

PEZ: What was the jump from 100% ME to AN Post like?
It wasn’t too bad actually I did a lot of big races with the Academy so it wasn’t such a jump it was more the volume of racing. 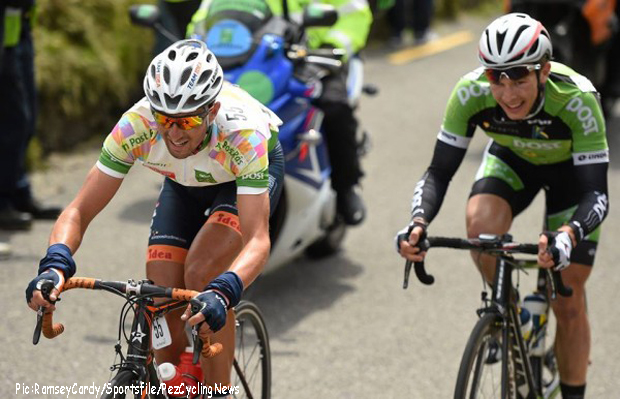 PEZ: You’re based in Belgium now – what are the pros and cons?
Yes I lived in Scherpunhuvel for a few months this year with Ryan Mullen.

It was a nice change to Manchester where I based with the Academy.

It’s great if you’re a bike rider for the racing and the atmosphere but the training roads aren’t brilliant out there with all the bike paths.

PEZ: Fourth in the U23 Ronde – a nice ride, tell us about it, please.
One of my big targets for the year was to try and win one of the European U23 Nations Cup races (the UCI competition for U23 riders) which are the U23 Flanders, Cote Picardie and ZLM – which I was fourth in last year.

Going into it was feeling pretty confident and the lads looked after me all day.

In the end it came down a small group sprint of about 30 riders.

It would have been better if it was a harder race but with a headwind on most of the circuit it was hard to force it as much.

I wanted to build on this and try and win one of the remaining two Nations Cups but I crashed out of both. 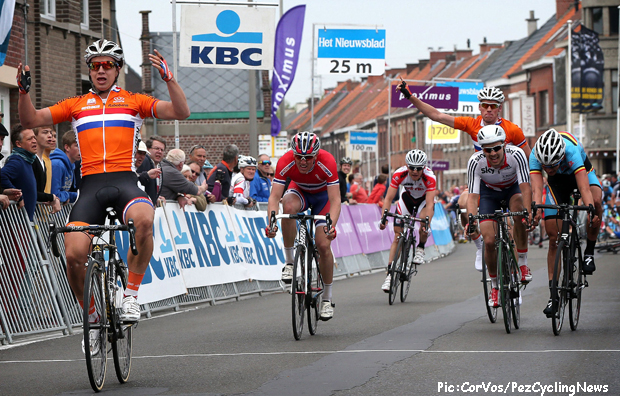 Fourth in the U23 Tour of Flanders behind Dylan Groenewegen (Netherlands)

PEZ: Monts & Chateaux – a big race, a great win; tell us about that too, please.
Yes it’s probably my biggest win to date on the road and something I’m really proud of.

Going into it I knew it was a good race for me but I wasn’t sure how I was going as it was pretty soon after the Track Worlds.

On the first stage I was in the break all day and got caught towards the finish.

On the second stage I was second in the time trial behind my team mate Jon Dibben and then took the leader’s jersey in the afternoon stage from him.

Going into the last stage I knew it was going to be a hard day out with a lot of climbs but the lads rode really well and I ended up winning the stage from a small group which was a nice way to pay them back for their hard work.

PEZ: The Monts & Chateaux result must have generated interest from the big teams?
Yes it did, which was nice.

It’s a big race on the amateur scene with guys like Stijn Devolder, Matt Hayman and Lars Boom as previous winners

PEZ: Tell us about the Tour of Azerbaijan, please.
It was an interesting race to do and I’ve never done anything like it before.

On the first stage we were racing in a sandstorm basically with 70kph winds blowing up all the dust from the desert.

It was similar to what you see in Qatar but it was also pretty mountainous.

It was an experience to say the least but a good one.

PEZ: What’s your favourite kind of race?
I love the classics and that style of racing.

Paris-Roubaix and Flanders are the type of races I aspire to win one day.

PEZ: The Games, fourth in the pursuit but you beat eventual bronze medallist Marc Ryan in qualifying.
I went into it hoping to do around a 4.25 and wherever I ended up finishing with that I would be happy – but I ended up doing a 4.21 and qualifying third which was a lot more than I was expecting.

It was obviously disappointing to not come away without a medal but I knew it was always going to be a hard ride off against someone of Marc’s calibre – he has numerous Olympic, Commonwealth and Worlds medals to his name. 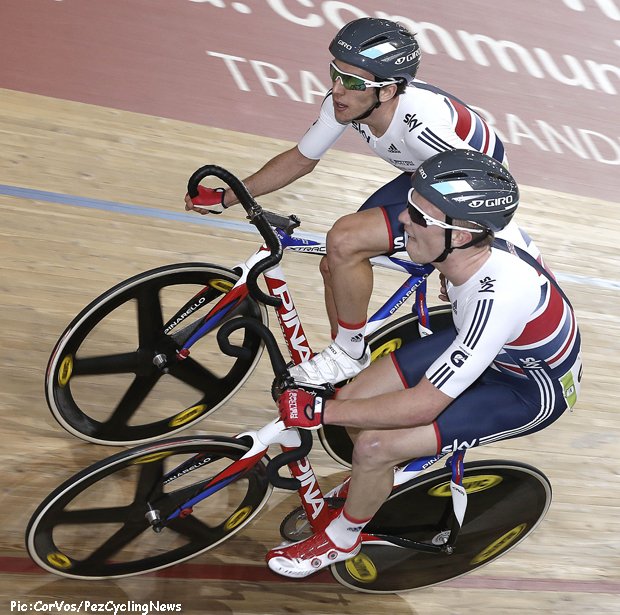 PEZ: You were fourth in the Points Race too, were you affected by the ‘controversies’ Pete Kennaugh was complaining about?
Yes fourth again it was starting to get annoying at this point!

It was different for me as Pete and the Kiwi’s both had a full team helping them out where I was a bit more isolated and they were using team tactics a bit more.

I like to think I would have ended up with a medal if it was individual riders from each nation and not so team orientated.

PEZ: Do you think the time will come when you leave the track behind?
You never know; it’s always a hard one because I want to achieve a lot on the road and the track and the time will probably come where I have to choose to concentrate on one over the other.

PEZ: No Games TT for you but you’ve ridden some very strong TT’s in the last year or two.
I decided against doing the TT at the games as I don’t think I would have had the correct preparation coming off the track but I don’t mind the odd TT.

It’s always a going to be strength just because of the amount of time I spend on a TT bike during the winter with team pursuit preparation – you become comfortable in that position. 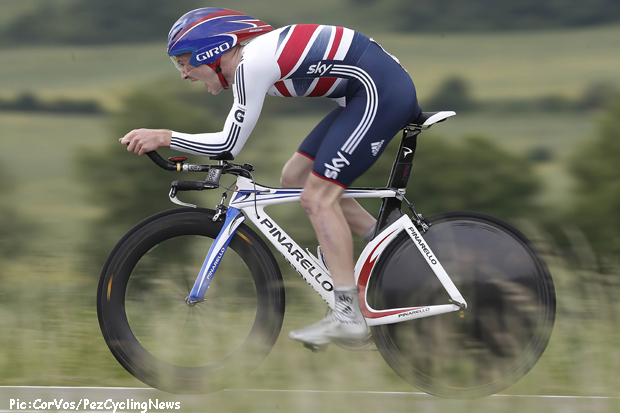 PEZ: The Games road race was horrific roadside with that wind and rain – what was it like to ride it?
It wasn’t as bad as it looked if I’m honest.

I was mentally prepared for a very wet race and we were drenched on the start line so we you couldn’t get any wetter!

It did make the circuit pretty hard as you couldn’t carry much speed in the corners and meant you couldn’t switch off at all.

PEZ: What’s 2015 looking like for you?
Good hopefully, I don’t have a team for next year yet but I’m hoping to perform well at the Tour de L’Avenir, Tour of Britain and the then the U23 Road Worlds and move on to a bigger professional team. 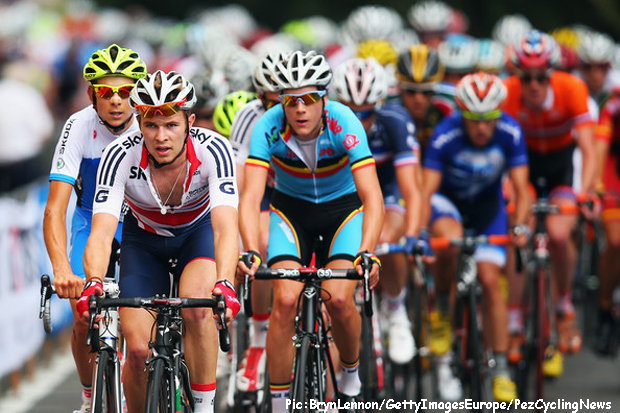 PEZ: And finally, I see you’re fluent in Welsh – does that ever come in handy in bike races?
I am yes, It has a few times – Scott Davies is also fluent so when were racing together we do speak Welsh but probably more for the novelty of it.

Watch for the name in L’Avenir, Tour of Britain and Worlds – with thanks to Joscelin Ryan and the Dave Rayner Fund for setting the interview up for us.