Interview: On Sunday Paul Watson told us all about his ICF World championship win in Belgium recently and touched on his problems being a professional back in the ’80s. In part 2 of his interview with Ed Hood, Paul looks back in more detail on the good and the bad times of a Pro back in the day.

Paul Watson is back, that’s for sure – with a 50+ world champion’s jersey on is back. If you’re a PEZ regular then you’ll have read our interview about his recent win in the ICF Worlds in Belgium. But the man also has a tale to tale about his early days on the bike.

He was originally a cyclocross rider, capable of making the podium in the British national championships and in continental ‘crosses – but he made the transition to the road and the big results weren’t long in coming.

Being a Scot I just had to ask him about his stage win in what used to be the UK’s premier stage race – discounting the National Tours – The Girvan Three Day. Held at Easter the race had a reputation for tough parcours over the hilly southwest of the country – and weather which could range from mellow spring sunshine to white-out snow blizzard. The year was 1985 and he’d go on to win a stage in the Tour of Britain ‘Milk Race,’ taking third on GC and then grab the British Amateur Road race title as well as a top finish in the ‘Worlds.’ 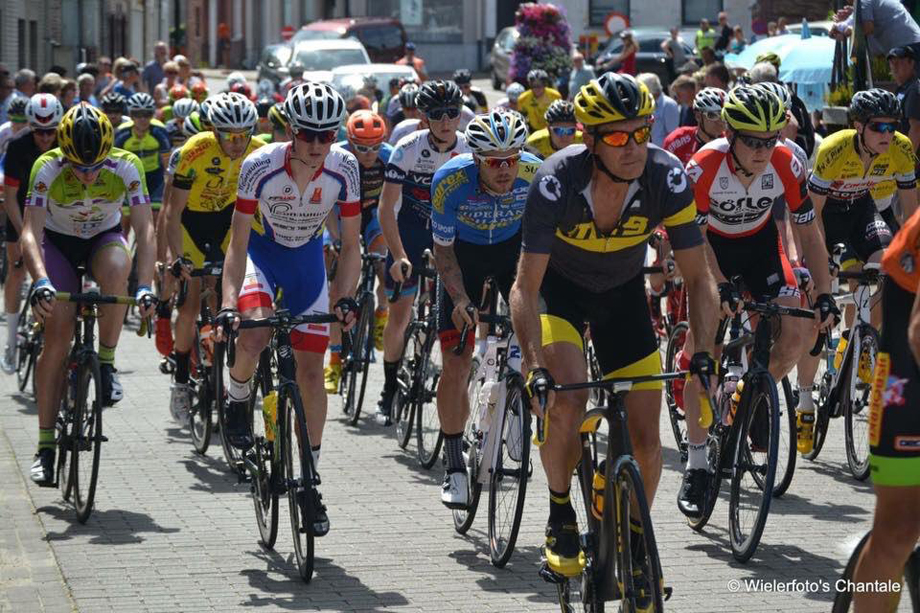 Racing with the young lads in Belgium

PEZ: But your memories from Girvan first?
Paul Watson: That stage started with a whacking big climb out of Girvan, I lined it out from the gun with the intention of hitting it hard on the climb. But then I punctured! Of course, because I’d lined it out the service cars were way back and I had to wait an eternity for a wheel – the service guy told me that I lost eight minutes. I chased and chased all day, from group to group and only caught Paul Curran (top British road and track rider of the era, ed.) who was away on his own, inside five miles to go.

PEZ: I’d actually forgotten about his fine ride in the ’85 Worlds where he took 14th. . .
Brian Holm and I jumped across from the bunch to the break, we caught them with 1500 meters to go and I took a flyer because I knew I wouldn’t be up there in a sprint; but as I went down the left hand side of the road, Brian went on the right – we were brought back and the Pole, Lech Piasecki won it. I ended up 14th in the final reckoning

Piasecki would go on to wear yellow in the Tour de France and win the world professional pursuit title whilst Watson would end the year riding with Milk Race winner Van Lancker’s Fangio team.
They’d seen me get third in the Milk Race and offered me a place on the strength of that; looking back I wish I’d stayed with them for 1986 because Fangio eventually became ADR and that team had a lot of success – Lemond won the Tour for them. But I got a good offer to ride for Raleigh in the UK for ’86 and accepted it. 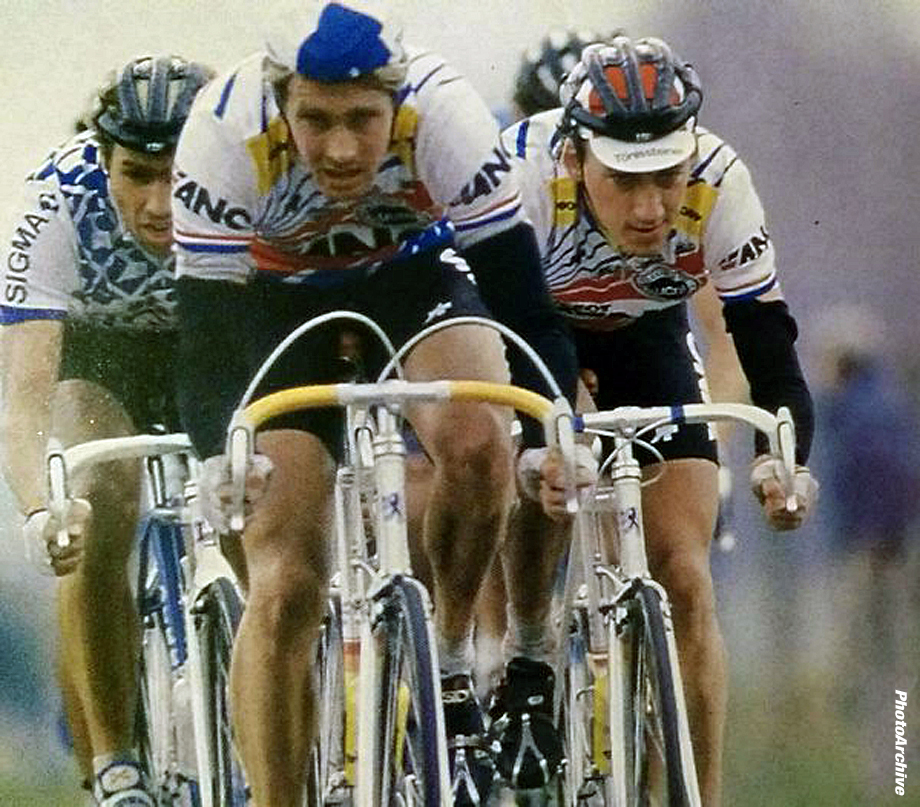 Watson’s palmarès for 1986 aren’t thick on the ground but for season 1987 he was offered a place with the now cult ANC squad, managed by British amateur cycling legend, Phil Griffiths.
It was Mickey Morrison approached me to join the team, Lycra-Halfords but we raced in ANC colours abroad – it was certainly a year to remember! I got third in the season opener, La Marseillaise but we were thrown so in at the deep end. And remember, there were no mobile phones or laptops back then and our preparation was nothing like the continental riders had.

We had some good lads in that team, Joey McLaughlin, who won the 1986 Milk Race and 1987 Tour of Britain; Malcolm Elliot who would go on to win the points jersey in the Vuelta and Adrian Timmis who won a stage in the Midi Libere. Slowly we started to find our feet.

I got sixth in the Flèche-Wallonne on one of those days where it all just falls into place for you and you can do no wrong; and Malcolm was third in the Amstel Gold race – so on the strength of those rides organizers wanted us in their races.

We rode a lot of the big races and by the time the Tour de France came round I was exhausted and abandoned. I was never going to be a Grand Tour rider; I could have been a good Ardennes Classics rider and performed in the late season races, resting in the summer – but the Tour was just too much for me, my morale was shot. 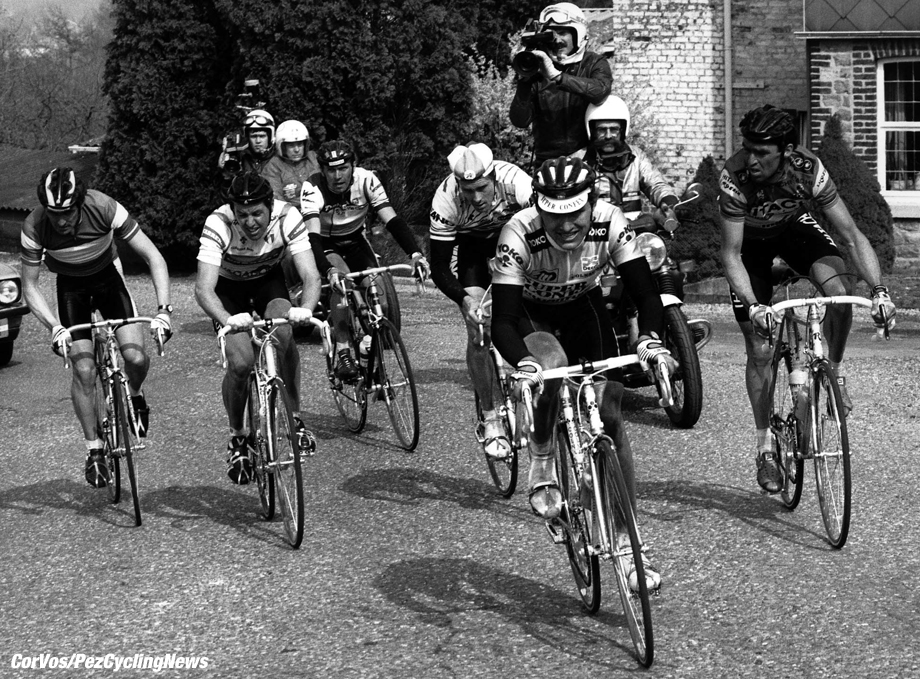 Mixing it with the big names in Flèche-Wallonne

There are tales of a fractious relationship between Watson and team manager, Griffiths – do they get along now?
Phil has mellowed a lot, we all have and everyone was under pressure back then, not just the riders, Phil must have been under huge pressure from Tony Capper who owned the team – and there was always a shortage of money.

Despite his Tour DNF and loss of morale Watson received an offer to ride for Claude Criquielion’s Hitachi squad for 1988 – Watson’s sixth in the Flèche hadn’t gone unnoticed.
They were really good guys at Hitachi, Claude Criquielion, Marc Sergeant, Dirk De Wolf, I have nothing but good memories of the team – but my head had come off with pro cycling, I was disillusioned.

When Criquielion died last year Watson related the tale of when he was riding for Claudy the Englishman was chatting back in the peloton when he should have been up front chasing for his Boss. The Belgian slid back through the bunch, found Watson and dragged him by the ear up to the front of the string to do his job – much to the hilarity of the whole peloton.

Despite a lack of results there was a ride with the team there for him in 1989 if he wanted it but. . .
At Xmas 1988 I had a few drinks and got pretty relaxed with a journalist from the Guardian newspaper (Geoffrey Beattie) and told him about what I’d seen in the pro peloton – guys injecting themselves in races and the likes. I thought we were just chatting socially, off the record – he was a Sheffield guy like me – but I was naive, he wrote an article around it.

The British Cycling Federation saw it and rather than do anything about what I was saying, they chose to refuse to issue me with a race license. In fairness to Hitachi they tried to help and get the ruling overturned – and Brian Holm said there was a place for me with him at the Sigma team but we couldn’t get the BCF to budge and that was that. 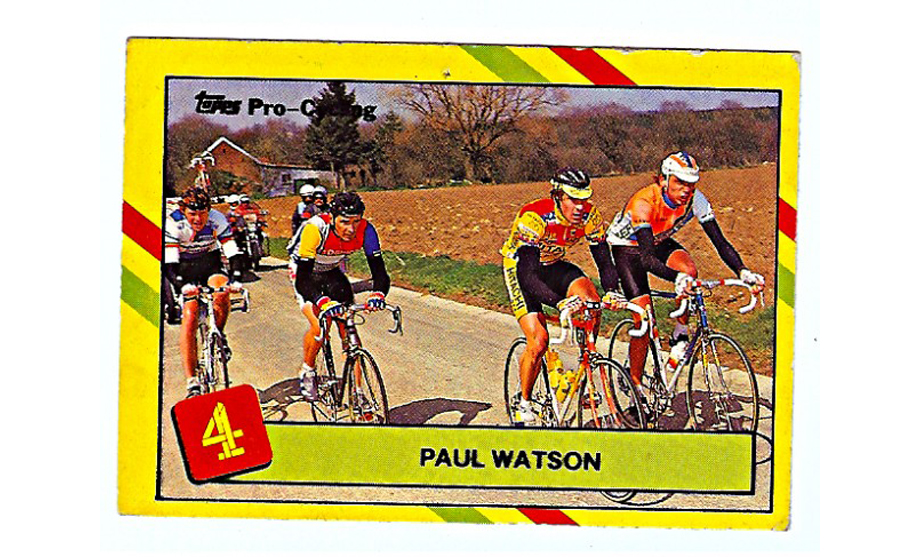 Back in the day

He has some strong views on the subject of drugs in cycling.
I think there’s a lot of hypocrisy within the Media, on the one hand they condemn drug taking but then someone like me who walks away because they can’t handle what’s going on all around them – I mean, one minute your riding alongside big Bert Oosterbosch in the peloton and the next you hear, he’s dead – is criticized because I “couldn’t make it.”

I chose to take the moral high ground but when I see articles about my career I read; “showed promise but didn’t deliver.” 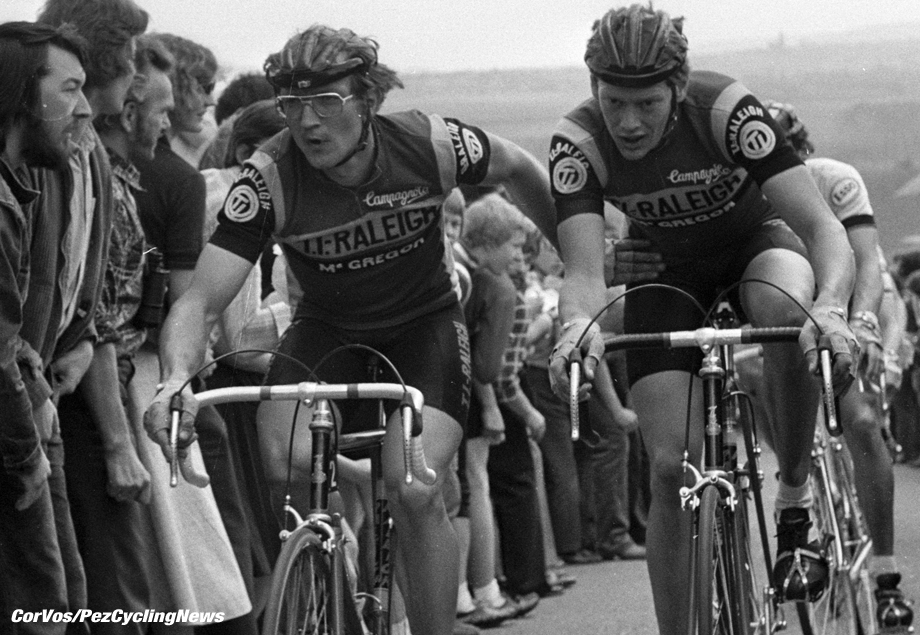 Watson’s next move was to head west across the Atlantic to the Land of the Free where the mountain bike scene was exploding; ideal for a man with a cyclocross history and all that road core.
The MTB scene was non-UCI at that time, brilliant, with BMX-ers and the roadie crowd coming in to it. No one knew me but within three or four weeks I was picking up regular top six finishes and Marin signed me. I was good on the climbs but guys like Tomac – boy! Could they descend!

I realized I had to get better technical skills and spent the whole of that winter working on that aspect. I used to go out with a guy who was a good descender and eventually I was at the stage where I thought; “yeah, I can do this.”

But three or four weeks before the season started I fell off a cliff and broke my arm – there was nerve damage and it took 18 months before it was right. Marin were good and gave me a job in management; which was great because I picked up skills to prepare me for ‘civie street’ – how to run an office, work computers. I ran the team for three years and came back to the UK in 95/96.

The inevitable question, regrets?
I do wish I’d stayed with Fangio at the end of ’85 or managed to continue with Hitachi. But then again, that’s a difficult one because that would have lead me right into the start of the EPO era . . .

# Paul Watson: another man who reminds us that whatever Cycling lacks, it certainly has plenty of colorful characters with great tales to tell. # 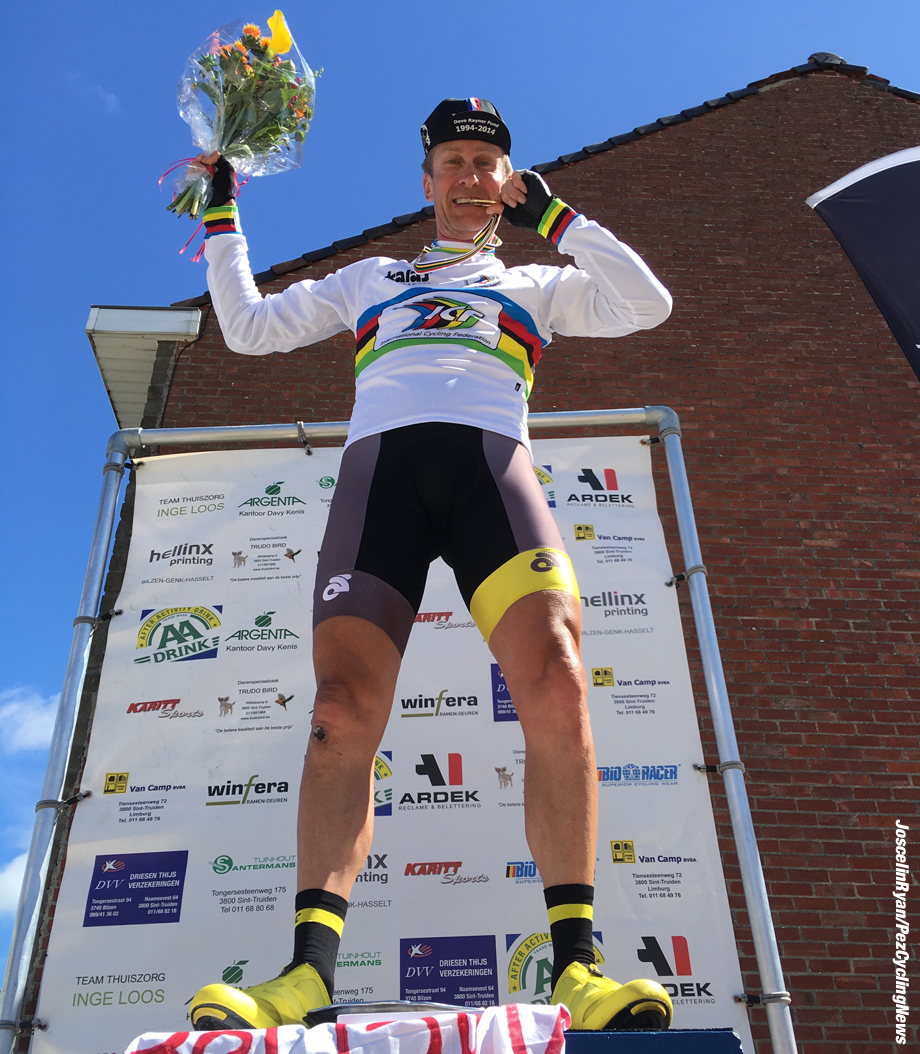 On top of the World!