Interview: Paul Watson was a road star of the ’80s, and then… But only a few weeks ago he started training, then racing and now he is a World champion. Age is no excuse for the ex-Tour and Classics rider, but class anyway shows through. Ed Hood managed to have a few words with the man, who is fighting back the years, between training sessions. Part 2 follows on Monday.

It’s hard to believe it’s 10 years since last I spoke to Paul Watson about a great ride he pulled off in 1987.

Paul Watson? I hear you question.

He was British Amateur Road Champion in 1985, the same year as he was third in the Tour of Britain, ‘Milk Race’ behind Liege-Bastogne-Liege winner, Eric Van Lancker of Belgium and the man who should have been a super star but never quite was, Roy Knickman (USA).

He rode pro with Van Lancker’s Belgian Fangio team at the end of that year but returned to Britain to ride for Raleigh in 1986.

The 1987 season saw him join the now legendary ANC squad and pull off some excellent results like third in the hotly contested season opening La Marseillaise and a stunning sixth (the ride I mention above) among the very best of company – Roche, Criquielion, Madiot, Golz – in the tough Ardennes Classic the Flèche-Wallonne. 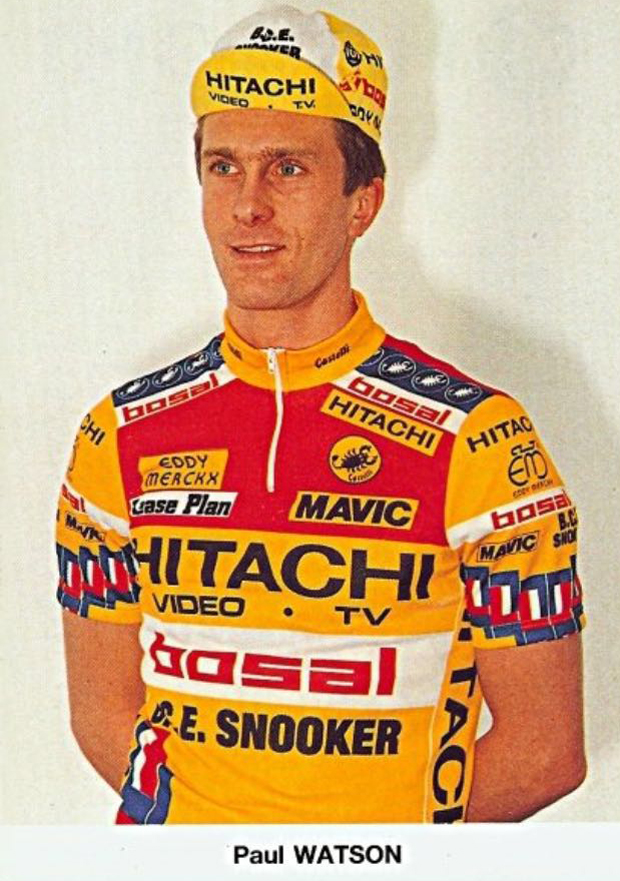 He started the Tour de France but was DNF with his morale completely shot from the rigors of the 80’s ‘pro life.’ However, his ’87 Flèche ride had brought him to the attention of Criquielion’s Splendor team who signed him for season 1988. What should have been the start was actually the end and there was no 1989 road season for Watson.

He went off to race in the fledgling MTB scene in the US in 1989 after a ‘brush with authority’ and that was that. . .

. . . Until he went and won the International Cycling Federation 50+ World Road Championship in Belgium, the other day, that is. Euro Editor Al Hamilton pointed me in the right direction and with the help of Joscelin Ryan in Belgium, here’s what Mr. Watson had to say to us about his win: 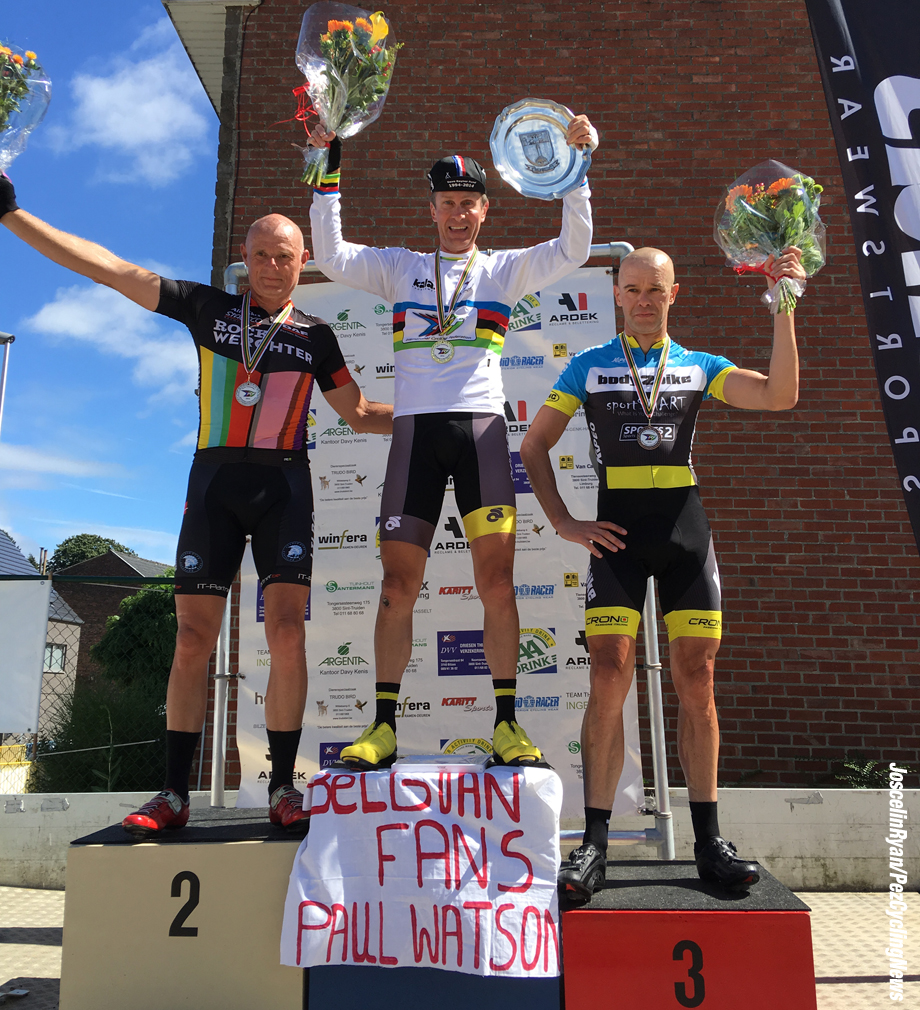 PEZ: Congratulations, Paul – why come back now?
Paul Watson: Last November I decided that I was so out of shape I had to do something, the ambition was to tone my upper body. But I started to use the cross trainer and could see that my watts were steadily improving – this whole ‘training on power aspect’ was new to me, that wasn’t around in the eighties. I was curious about it and started asking around as to what would constitute decent average watts over a set period. I decided to get back on the bike – that was April 2nd – but I took a battering on my first ride, in fact I was battered all of April and into May.

I was training in Belgium in May and met Dr. Kris Van Der Mieren who’s team doctor for the National Belgium Team, he said that I should be careful coming back, sometimes pros hearts are damaged from all the work they did during their career and to come back can be dangerous; but he did the ramp test with me and gave me the all clear – and has been advising me since.

Then I went to Denia in Spain in June for three weeks to train and rode my first race on July 6th, an Elite Kermis at Oplinter in Belgium, 120km in the rain with 120 riders but only 65 finishers, I finished 45th. I was well pleased with that – and I’ve only ridden Elite races since.

I’ve been staying with the Dave Rayner Funded guys at Cafe Sur Place and hopefully I’ve been able to help them with advice.

The Rayner Fund is great, there was nothing like that back in the eighties and it’s great these lads being able to come over here and get into the thick of it through the fund. 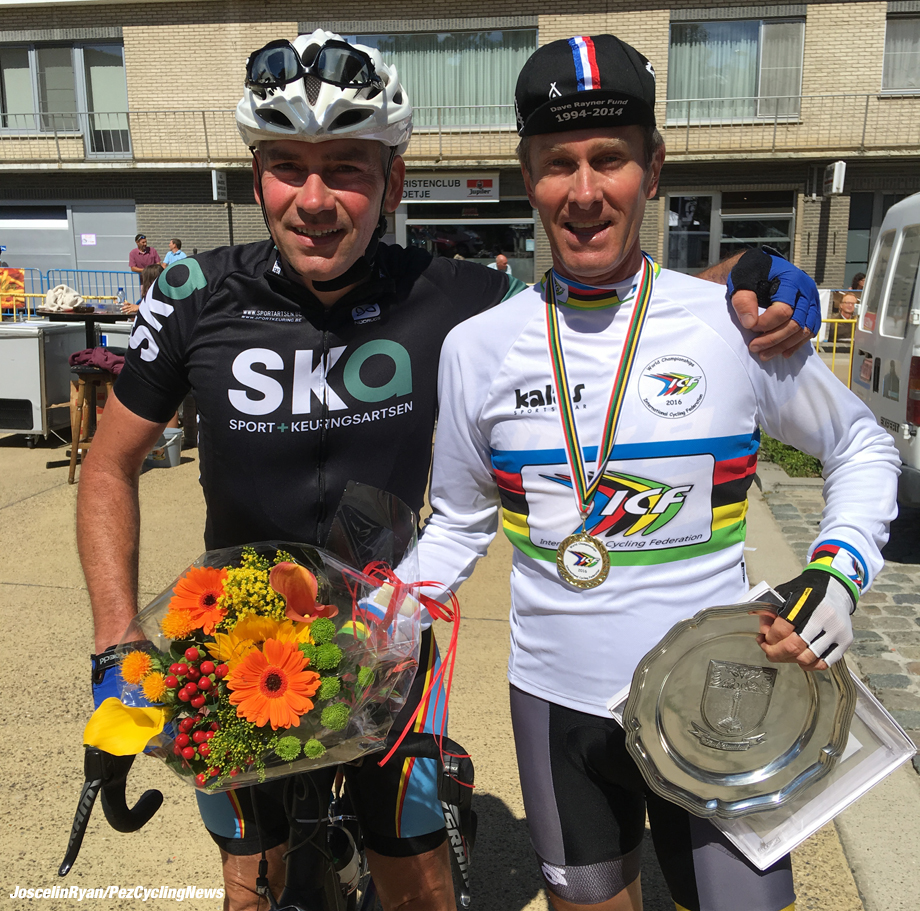 PEZ: Tell us about the title race, it’s not the UCI Vets Worlds, is it?
No, it’s the International Cycling Federation Championship which most say is more hotly contested than the UCI one which in Perth, Australia this year. The races for the various age groups were held in Belgium in the St. Truiden district at Groot Gelmen, there were 97 starters with 25 of those ex-pros.

PEZ: Talk us through it please. . .
It was a 6.5K circuit with two punchy climbs, both of which came straight off ‘dead’ left hand turns – I thought it was a great circuit. I strung it out on the first lap and kept it going so that it split down to 10 of us then on the second lap it split again down to just four. Then another 10 came up to give 14 up front, the guy who would eventually finish second clipped off and I got up to him on the climb. That was it; we were away for the second half of the race albeit we never had more than 35 seconds on the rest.

I didn’t want to take any chances with the sprint – I’ve been having a few problems with my stomach when I make really big efforts – so on the climb two K from the finish I attacked, got the gap and won by 12 seconds. 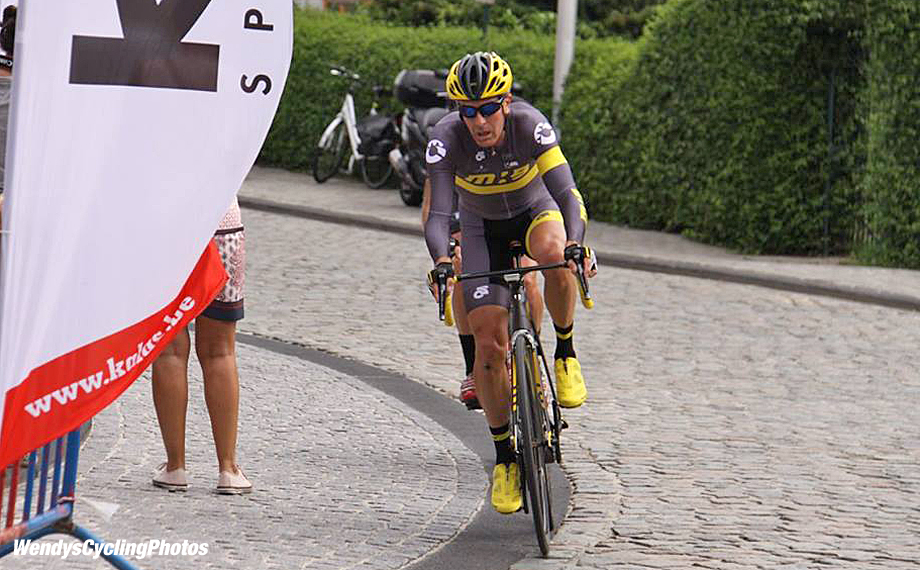 PEZ: What now then, Paul?
Well, I do think it’s a clean sport now, so if you train hard, eat well, rest and race hard you don’t have to worry that you won’t get results because others have ‘an advantage.’ The reason I’m doing this is that I want to see how far I can – as a 55 year-old guy. But if someone asks me about my age and how I can’t do this or that I just tell them; ‘look, I don’t want to hear it!’

I think I have a lot more to come; they show you those charts and graphs about how your VO2 max and heart and watts deteriorate as you get older. I think that’s all bollocks! Maybe it applies to truck drivers but if you’re dedicated and looking after yourself it’s different; hopefully I can be an inspiration to guys? 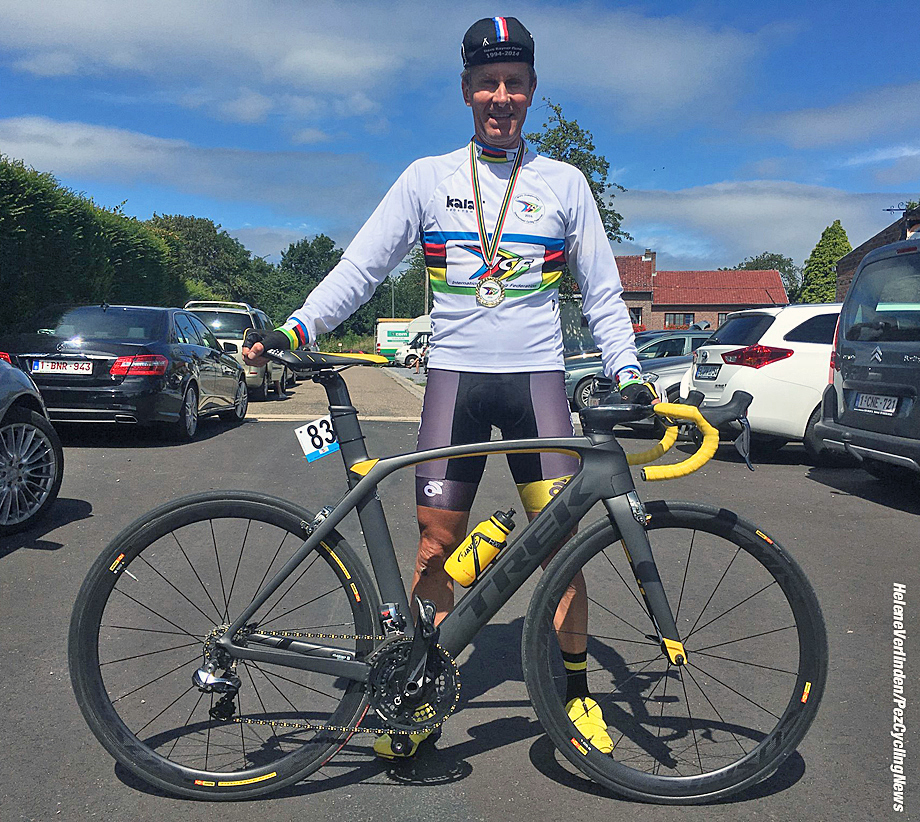 World champ and his bike

PEZ: Final question, I see you’re on a nice aero Trek – what about all this new ‘trick’ kit, wee bit different from your ANC Peugeot?
It’s amazing, I’m really enjoying all this new stuff – Garmins, Strava, power meters. I’m loving all that, there’s so much to get excited about, isn’t there?

So if a ‘mature’ gentleman on a black Trek in a rainbow jersey flies past you, don’t be too concerned about your form, it’ll just be Paul.

# In the next part of our interview with him we’ll be looking back at his professional career. # 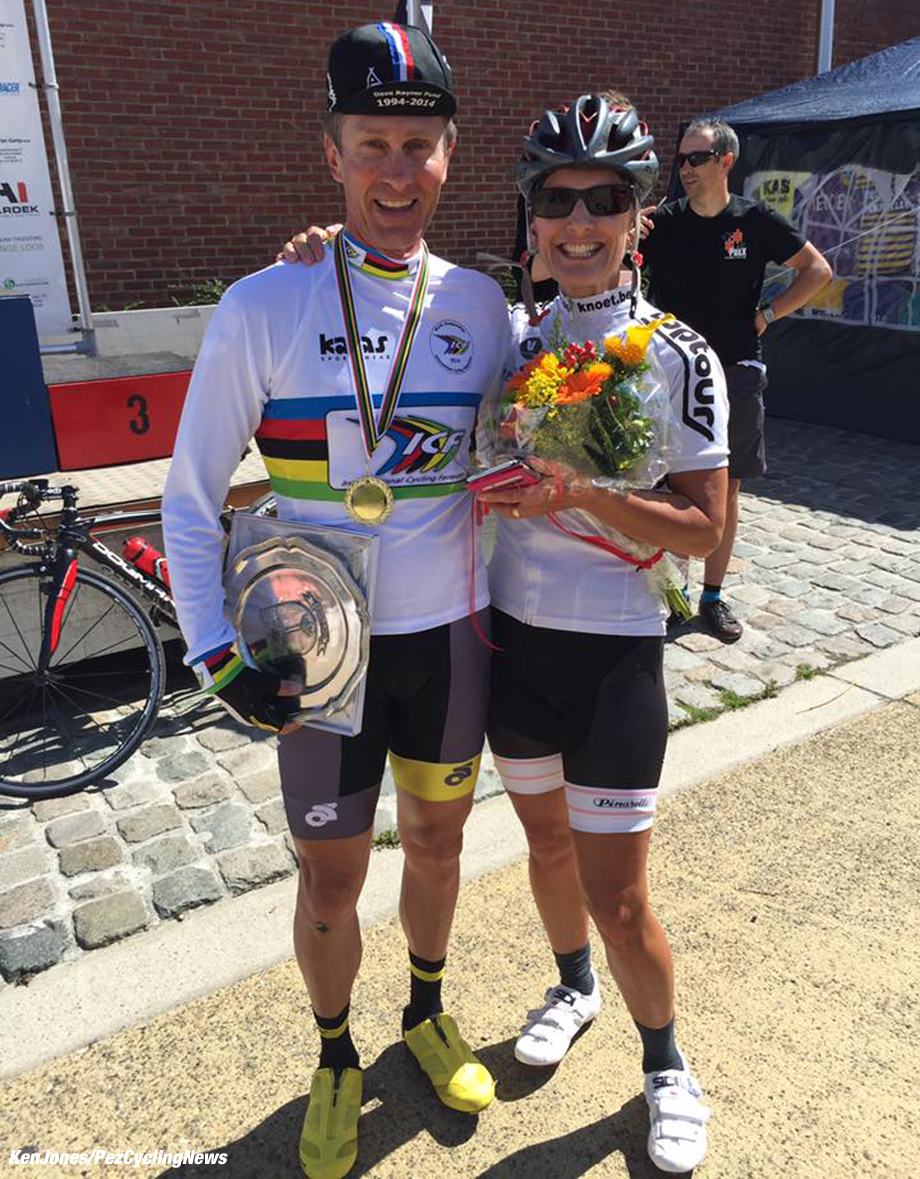