It hasn’t been a good week for US cycling – and whilst the past cannot be changed, the future of the sport took a direct hit when it was announced there will be no Philadelphia International Cycling Championship in 2013. We thought we’d get the lowdown from the man behind this great event to hear what happened to this year’s race and what’s going to happen in the future.

Philly’s a race I’ve always wanted to see – and now maybe I never will be able to join that huge party on the Manayunk Wall. Ask any fast man on the US circuit which race they lust for most and there’ll be only one answer; ‘Philly!’ PEZ contacted race organiser Dave Chauner as soon as we heard the sad news. Chauner is a US Cycling Hall of Famer and was one of the first US riders to make an impression on what was then a European dominated sport.

We thought we should ask him a few questions about his career as a racer before we discussed the demise of his beloved race. He very kindly took time to answer our questions on a sad day for US bike racing.

PEZ: You were originally a track rider, Dave – how did you get into that?

I was a junior racer in PA (we rode fixed gear on the road then) and went to see the 1964 Olympic trials at the new Kissena track in New York. My club was the Century Road Club of America whose top members were Jack Simes and Alan Greico who qualified for the Olympic sprints that year. There was an historic connection to track racing in the NYC area so we had a lot of club track races at Kissena and the only National Championships for juniors back then were on the track. We thought road racing was dumb.

PEZ: What were the Olympics like in 1968 and ’72 when you were exposed to the strong European and then East European cycling nations?

An eye opening experience where we were first exposed to scientific coaching methods and cycling teams that were managed professionally by well known coaches like Guido Costa of Italy in 1968. The East and West German team pursuiters battled for the gold in 1972 as we watched in awe. 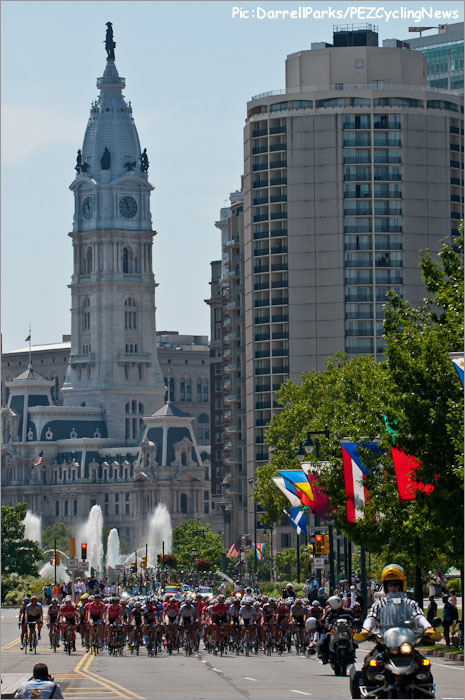 Philly truly is a beautiful race.

PEZ: You won bronze in the Pan-Am team pursuit in 1971 – can you tell us about that?

We were up against Colombia headed by their national hero and world amateur pursuit champion, Cochise Rodriguez in the semi finals. I was the starter for the team and pulled my foot out of the pedal. We recovered and later that evening won the bronze against Puerto Rico in a time that was a few tenths off Colombia’s Gold Medal winning ride against Argentina. We would’ve given them a run. I got deeper grooved cleats for 1972

PEZ: Your stage win in the English Milk Race in 1975 was one of the first big US international results – can you tell us about it, please?

That year was the second year an American team had been invited and race director, Phil Liggett, gave the USA a second shot even though the team had done poorly the year before. We were a much better team and felt we had something to prove. We came in with better preparation after doing the 12 day Tour of Baja (Mexico) the month before. I was flying and got eighth in the prologue. Halfway through the week I had a bout with dysentery and almost didn’t make the time cut. Although Ochowicz had gotten third in one stage our results were not remarkable with our best placed man, Allis in 16th on GC.

By the last few days I had recovered and was feeling great again although way down on GC. The only thing left was to get a stage win which I felt I could do if I could time trial away in the last mile or two. I was in the 20 man lead group nearing the end of the final stage into Blackpool so I jumped away on a slight uphill with two miles to go. There was enough hesitation so I got clear and finished four seconds ahead of the field sprint. The 18 year old Sean Kelly had crashed on the last climb and Pat McQuaid was somewhere back in the bunch.

PEZ: Did you ever consider becoming a ‘Euro Dog’ and moving to France or Belgium?

PEZ: Is it correct that you got the idea for Philly at the ’84 Worlds in Barcelona?

Yes. Jack Simes and I had controlled USPRO and ran the first pro national championship as a criterium in Baltimore in 1982 and 1983 but our TV partner was sold and the race couldn’t continue. With US Road race victories in the 1984 Olympics we decided that the U.S. needed a road championship in a big city. Jack, Jerry Casale and I were handling the American pro team at the Worlds and ended up with pitchers of sangria and big cigars, planning how we could create a road championship in Philadelphia where Jerry and I grew up. After the night wore off, we hadn’t lost the dream and the rest is history – this year would have been the 29th edition. 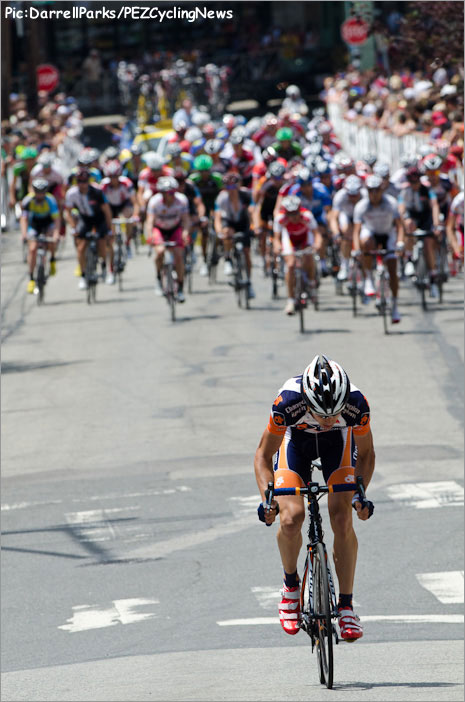 An attack on the Manayunk wall in the 2012 race.

PEZ: Including Manayunk was a stroke of genius; did you anticipate how special it would become?

We had no idea. We thought it was pretty cool and hoped everyone would drink the kool-aid – they did 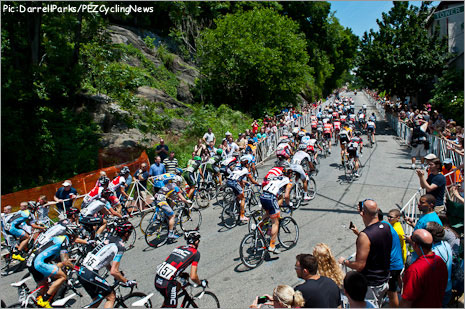 PEZ: Do you have a favourite edition of the race?

The one that comes to mind first was Lance’s win in 1993 to take the million dollars ‘triple crown.’ He was charismatic, young, brash and the kind of personality the sport needed to go more mainstream. He had to live up to those early expectations and now we know how he was able to do so. 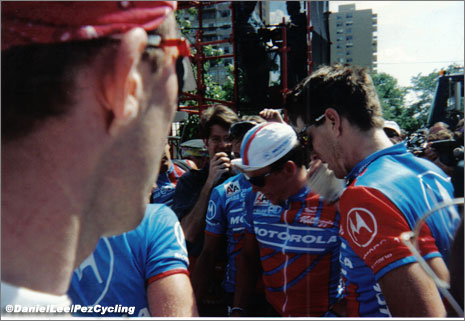 Lance Armstrong surrounded by teammates and wellwishers after his million dollar ride in ’93.

PEZ: Why did you cut the distance in 2012?
City costs were getting too high for a six hour race that featured 200 riders who didn’t pay entry fees. We needed to answer the desires of recreational cyclists and raise more money to pay for the amount of time we were requiring to close the streets. The Bicycling Open gave recreational cyclists a chance to ride the iconic course before the pros and bring in some much needed new revenue. It was actually a great concept and made the shortened pro race more exciting and competitive.

PEZ: How much impact did Jerry Casale’s death have upon you and the race?

Jerry was a lifelong friend and partner who was an outstanding operations guy. No one on our ops staff could come near to filling his shoes so it hurt. There are probably young Jerry’s out there for us to bring in when the time is right. I look forward to passing on what we learned from Jerry’s way of dealing with people and motivating staff. 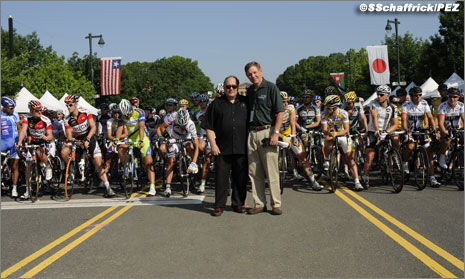 PEZ: Why no race, this year – does the Armstrong scandal have a bearing?

More so than it will have in another few months. I believe there is a strong desire to put this ugly period behind us and a real opportunity to sell the benefits of the sport without having to rely on the personality of one rider. Recall that our race did well for many years after Lance’s last appearance in 1998.

PEZ: It’s going to be strange for you on ‘race weekend’ is it not?

PEZ: Did you ever consider trying to get the race on the UCI World Calendar – it has the history?

It has been a UCI 1.HC event for years, the only one in the U.S. but American Cycling needs to find a better way to grow than in lockstep with the UCI. Any future events we do will be more to satisfy the needs of American riders, fans and the media which are not always considered in federation rulebooks. Plus many people with vested interest in the sport are dissatisfied by UCI and USAC leadership that did too little, too late in combating what has come close to killing the sport.

PEZ: Don’t you fear that the loss of momentum by taking a year out will be hard to regain?

No – money talks. A year from now we expect that there will be much better opportunity and willingness to introduce changes that better recognize a broader cycling market and support changes that benefit domestic cycling.

PEZ: Will we definitely see Philly back for 2014?

We certainly hope so. It will depend upon solid financial commitment and desire by the city to embrace cycling.