Columbia’s Matt Goss is yet another talented Aussie who came up through the Australian Institute of Sport’s track programme – junior and senior Worlds and Commonwealth team pursuit honours are all in the Tasmanian’s palmares. He is hitting his stride now with a stage at the Giro and a win in Philly on Sunday. Ed Hood chatted with the sprinter following a long flight home.

But in the last few seasons he’s started to notch up the pro road wins – in 2007 he took a stage in the Tour of Britain; he did the same again in 2008 and added a couple of good Australian wins; last year was the breakthrough with 3rd in Gent-Wevelgem, two wins in the Wallonne Regions tour and another in Paris-Brussels; this year he’s bagged a Giro stage and on Sunday the mighty ‘Philly’ fell to his big finish.

A little later than we hoped – due to those dreaded ‘flight problems’ – we caught up with Matt at home in Monaco to talk to us about Sunday’s result.

PEZ: Congratulations, Matt – weren’t you a little tired from the Giro, though?
I was pretty tired, but I didn’t finish the Giro, I had to quit on stage 15 with a bad stomach – there was a bug going through the peloton.

I had a bit of a rest; three or four days off the bike but it was a few days before I came round, I still wasn’t feeling great on the bike the first few days back. 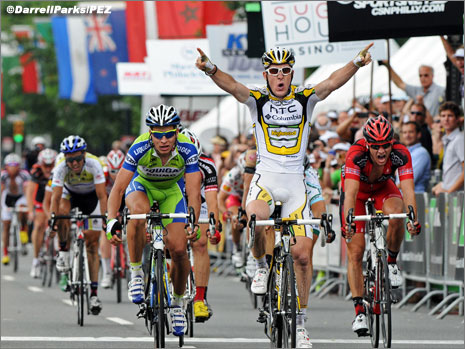 PEZ: It was looking like Liquigas’s day.
They were in a good situation with Oss in the break and Sagan and Chicchi back in the group; they had all the cards and that left us with a lot of work to do – but we had the luck at the end.

PEZ: It was a hard day with the wind and humidity.
I’ve done the race three times and I’m not just saying this because I won but that was the hardest edition I’ve ridden – really tough with that wind.

The humidity wasn’t such a big factor for me; it was really only on the climb, where you were going slowly that you felt it.

A problem I did have was cramp in my arms on the Wall; we don’t ride climbs like that so often and my arm muscles weren’t used to pulling so hard on the bars. 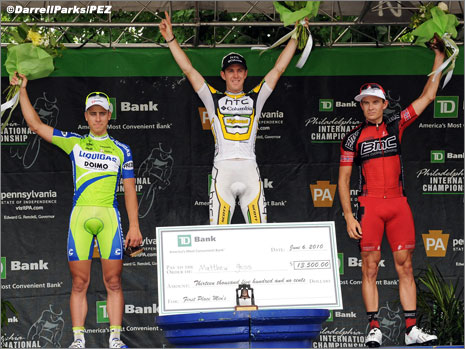 PEZ: The Wall was more manic than ever, I believe?
Crazy! It’s one of the best races I’ve ever ridden in terms of atmosphere; and it’s not just the Wall, the climb on the finish circuit – Lemon Hill – the noise and atmosphere there is terrific; it’s great motivation to race well.

PEZ: Columbia missed the break.
It was our intention to be with all the attacks but we missed that and had to work hard to make up for it.

It cost us a lot of energy, we had to use up guys to get the break back and that meant we didn’t have them for the finale – but we turned it round in the end. 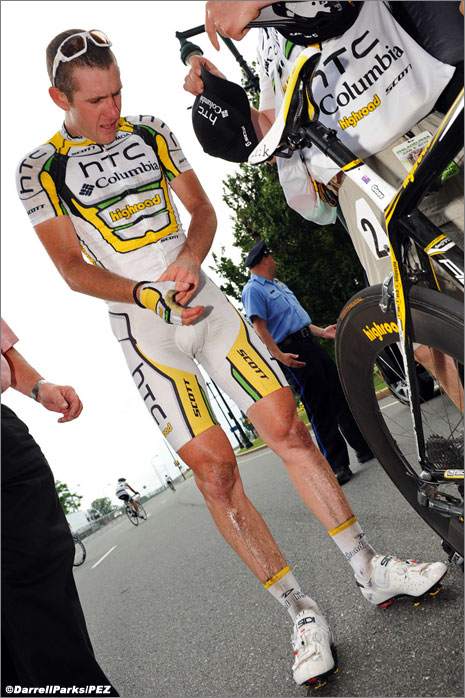 PEZ: There were a huge number of riders who didn’t finish.
I think that there were only 32 riders in that final group; the thing is that when the wind is blowing like that it’s easy to get popped off if you’re in a little group struggling at the back.

PEZ: Weren’t you a little jet lagged?
It ended up working in my favour, with the race being so long it starts at 09:00 am and with me wakening up at 05:30 there was no problem with eating breakfast early.

Maybe I was starting to get tired by the finish, though.

PEZ: Did you go under the shower on the wall?
For sure! I was putting in big efforts so as I could get a few easy pedal strokes under there!

PEZ: You had Frantisek Rabon and Craig Lewis for the finale.
Frantisek did the last climb and Craig was with me until the last kilometre; the guys did a great job for me.

I had good position out of the roundabout with 500 to go, maybe fourth or fifth wheel but they all sat up when they hit the head wind, then it went on the left and I moved across and was maybe sixth or seventh wheel, I bided my time and went past Sagan with 100/150 to go, I had a glance back but he wasn’t coming back at me. 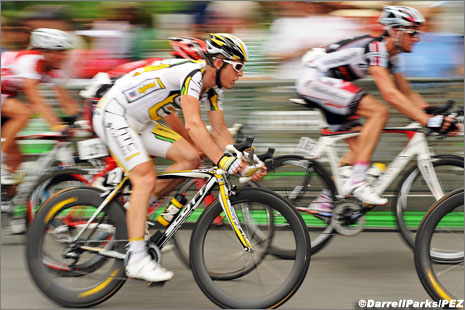 PEZ: Does the bank take those big podium cheques?
Well, I’ll need to get a bigger wallet, that’s for sure!

PEZ: Andrei Greipel won last year, has he been in touch?
I’ve not had a chance to look at my team emails yet so I’m not sure.

PEZ: Armstrong, Hincapie, Yates – and now, Goss.
Yeah, I was looking at the race’s roll of honour and some of the biggest names are on it, it’s special to be joining them.

PEZ: Was there time for a celebration in Philly?
No, the race finished at 3:45 and my flight was at 6:30 pm. I didn’t have time for the press conference, just the podium and drugs test.

It would be nice to celebrate properly with the team, thank them for their efforts – but at the same time, most guys just want to get home as soon as possible.

PEZ: A big win for a US sponsor.
I think so, with Columbia being an American company, every time we race in the US it’s a big deal.

PEZ: What about that lap of honour in the Mini?
Yeah, that was a bit different! I’ve never done a victory lap in a car before, much less a Mini – but I guess it’s part of the American way!

PEZ: What’s next?
I’m having a break of maybe five six weeks then I want to come back strong for the last part of the season; San Sebastian and such like – and of course, the Worlds in Australia.

***
With thanks to Matt for his time and congratulations on a great win – PEZ thinks that Aussie team is going to be hard to beat at the Worlds!