Young American all-arounder, Brent Bookwalter, has quietly climbed the ladder to the top echelon of the sport, where he now sits poised to take part (and succeed) in some of the greatest events bike racing has to offer. Milano-Sanremo was merely the first in what should be a long series of big days in 2010 for the BMC talent.

PEZ: Big changes at BMC, Brent?
Yes and no, we were Pro Continental with wild card status in 2009 – we rode the likes of Paris-Roubaix, Paris-Tours, Romandie and the Dauphine as well as the NRC series in the States. It’s true though that this year it’s mainly a Euro programme.

PEZ: The BMC plan for Milan – San Remo?
We went into the race with four guys who were protected; Hincapie, Ballan, Burghardt and Kroon – all of whom have had classics success in the past. We wanted it to be a hard race; we got that, but it wasn’t a great day for us – although it wasn’t a disaster, either. It was my first time of riding Milan – San Remo and I can see now why people say that it’s a unique race. 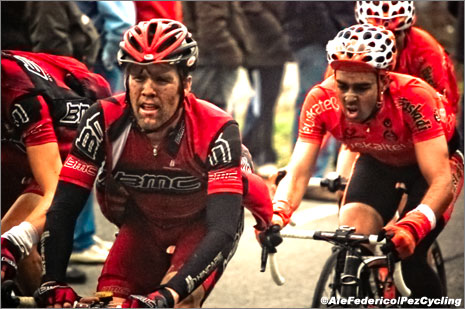 PEZ: How were the pre-Primavera nerves?
I was definitely tense, I was trying hard not to be overwhelmed and despite the fact that I was looking at a seven hour day, I was trying to stay calm. You have to have confidence in yourself and in your team. I think the nerves must be much worse for the likes of Boonen and Petacchi – they have the weight of the world upon them to deliver a big performance.

PEZ: You crashed out?
It was a rough day for crashes; I was involved in one at the first feed – I managed to stay upright, but I dropped my chain. I was held up by the crash in the tunnel at the top of the Turchino, too. I got over La Manie in the second group but we managed to get back up, after the descent. I was excited and thought, ‘that’s the re-set button pressed, we’re back in the game!’ Five kilometres late, I was hurled in the air – in Italy they have these little red plastic bollard things at the road dividing islands, they’re about knee high and you don’t see them ’til you’re on top of them. The guys in front flicked round them but I rode into one at full speed – I was sure I had broken something, I came down so hard. I lay there for a full minute then got up and inspected myself – they got the spare bike ready, but we decided that it was best to save it for another day. 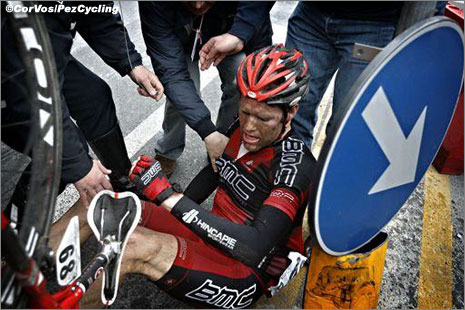 PEZ: How are you, today? (Sunday)
I’m definitely banged up; I woke up feeling like some crusty 80 year-old guy – my ribs are giving me a little problem. I didn’t ride today, the team doctor to take it super easy – just do some calm, relaxing stretching.

PEZ: Burghardt was your best man.
He was at the limit just making it in with the first group – but I think that the four guys I mentioned will all be good for the Belgian classics. 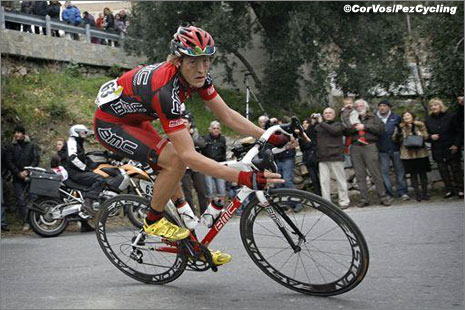 PEZ: Do you have debrief after a race like that?
That’s an interesting question – as a junior, collegiate and US domestic team rider, that was a critical part of the learning experience. But it’s not a super common occurrence with the pros – the thing is that the mental and physical exertion is so great during a race like this that after it everyone just wants to shake hands and go their separate ways. But we get post race emails from our DS and the guys will talk to each other, in the days after.

PEZ: How was Tirreno?
Great, I was really happy I got to do it – I was drafted in, late. It was a great experience; full on, challenging, aggressive racing. Because I was a late addition, I hadn’t done the homework – the speed, intensity and number of kilometres were a little bit of a shock to the system.

PEZ: Do you feel the responsibility of having the world champion on the team.
For sure! It’s a big responsibility and a huge honour – I want to help him and the team as much as Cadel wants to honour his jersey and do well for the team. It’s maybe only once in your career that you’ll get to ride in support of the rainbow jersey. 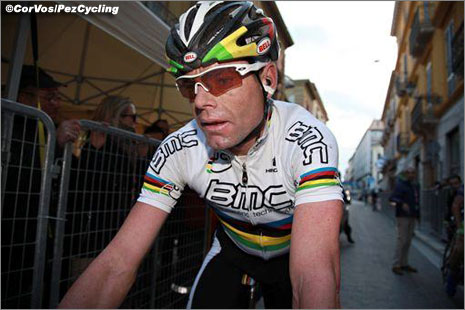 PEZ: How’s Cadel as a team mate.
A great leader, a good mentor – he loves to race and gives his all. I met him for the first time at the training camp and from then right up until now he’s been great. But the team is great, they nurture Cadel and the rest of us as people, not just racing cyclists. It’s not all just about watts, human beings are sensitive, emotional beings – not robots.

PEZ: The BMC’s – how do they ride?
I’ve been on the Pro full carbon since 2008, there have been new models in between times but my reaction is always to say; ‘if you want me try a new frame, I will, but I’m very happy with my Pro!’ As soon as I rode it, I could feel that it was the best balanced bike I’d ever ridden. I think our mix of BMC with Easton wheels and Continental tyres is the ultimate combination for descending. We were joking that if we made the Poggio descent with the leaders, there would be no problems for us!

PEZ: How are you taking to the Euro life style?
It’s not entirely new, I spent time in Belgium with the US under 23 team and last year with BMC we made two to six week trips to Europe. But having an apartment in Girona, buying the groceries, having to learn the language – that’s all new! 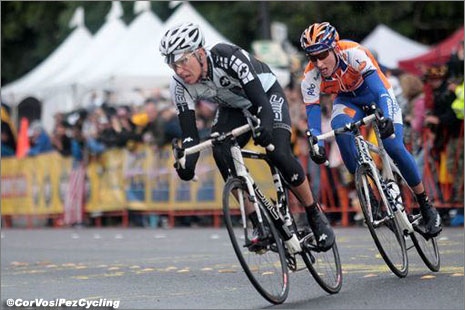 PEZ: Girona is a hot spot for English speaking riders.
There’s a whole crew here, it’s crazy – it’s hard to walk down the street without seeing a rider you know. My team mates, Jackson Stewart and Jeff Louder are here, too. Over the next few weeks, I hope to get integrated into the groups that go out.

PEZ: Favourite Spanish beer and tapa?
To tell you the truth, I haven’t had the chance try the beers – as for the tapas, I haven’t got the names,but I could draw you a picture!

PEZ: Next race?
The Circuit de la Sarthe; it starts April 6th for four days – that’ll give me a chance to get the soreness of the crash out of my body and recover from Tirreno and Milan – San Remo. The Sarthe is the start of a training block which will lead into the Giro.

PEZ: And 2010 will be good, if…
I just keep improving – you can only go forward or back. I want to improve for myself and for the team – I want to be there for them. The team has stepped up a level – and I want to do the same.

***
With thanks to an eloquent and focussed young man – we’ll be talking to him again, later in the season.

Sanremo PEZ: To The Poggio!

MSR’10: Inside The Break With ISD’s Diego Caccia