Ed Hood has a ride down memory lane with Canadian ground breaker, Ron Hayman. The man from British Columbia (via Scotland) made the bold step of moving to Belgium to fight amongst the hardest men in cycle sport on the hardest roads. From there he cut a fine career in the top US teams in the 80’s.

Phil Anderson second, Stephen Roche third, Robert Millar fourth – but what was the race and who won?

The 1979 Tour of Ireland – and in first place was a certain Ron Hayman of Canada, ‘guest riding’ for the English Archer Road Club. 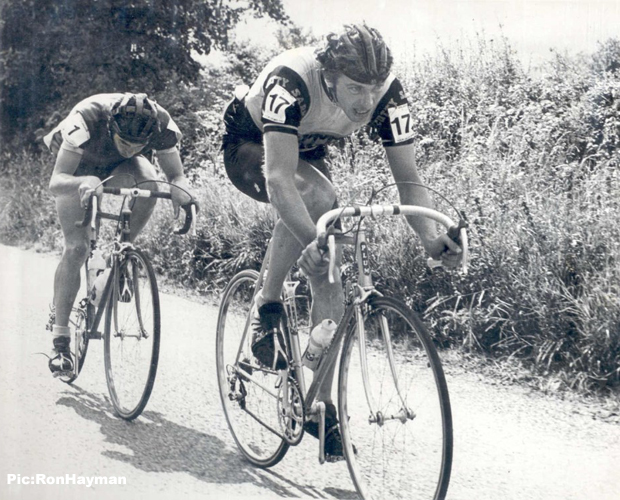 On the way to that win in Ireland

Hayman was one Canada’s pioneers; beating a trail to Europe and the tough Flemish school in those days when Belgium was still somewhere in a time warp around the year 1951 with roads, changing facilities, toilets and tough guys to match.

In 1979 the Canadian battled his way to the top of the Belgian amateur rankings – no mean feat, whatever the year. Hayman was actually born in Scotland – in the Lennoxtown, famous as a nail making town – before his parents emigrated to Canada.

But let’s have the man himself take up the story . . .

Ron Hayman: I was living on the west side of Vancouver in the 60’s – I was too young to drive at 13 years-old but there was a mid-week racing scene; I bought at an old Cinelli and started riding. The race scene was largely run by UK and Italian immigrants, there’d be races at 07:00 am in the suburbs and between Vancouver, Seattle and Portland we’d manage to race twice on the weekend. 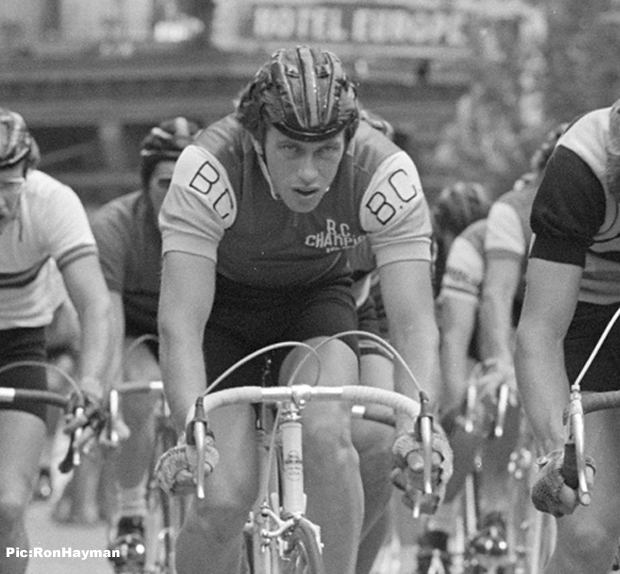 A young BC Champion

PEZ: You rode the ’72 and ’76 Olympics.
I helped with a work party resurfacing the old Empire (now Commonwealth, ed.) Games velodrome in Vancouver in 1971 and as a result began to ride the track. I was talent spotted and at 17, in 1972 I was selected to ride the Munich Olympic individual and team pursuits. We spent three weeks preparing in Denmark – on the tracks in Odense, Aarhus and Copenhagen. But I was completely overwhelmed by the experience and took stage fright.

In ’76 I was much better prepared but hit an official who was moving one of the track datum line markers and it was ‘end of story.’

PEZ: Tell us about your Tour of Ireland win.
I was good friends with the late Alaric Gayfer (a very talented British rider who was exceptionally talented as a schoolboy and junior on the UK track and time trial scene, ed) and he arranged for me to ‘guest ride’ for his club, the Archer, in the Tour of Ireland.

I’d moved to Belgium in ’77 and spent three years there racing against guys like Alfons De Wolf, Danny Willems and Etienne De Wilde. In ’78 and ’79 I was going really well in the kermises in East and West Flanders; but that delayed my transition to being a professional – you have to ride stage races to build the strength in depth that you need to ride at professional level. I won the Kemmel Three Day ahead of De Wilde and Eddy Planckaert; as a result Sean Kelly’s DS at Splendor invited me to ride for them – I often wonder what would have happened if I’d taken up his offer . . . 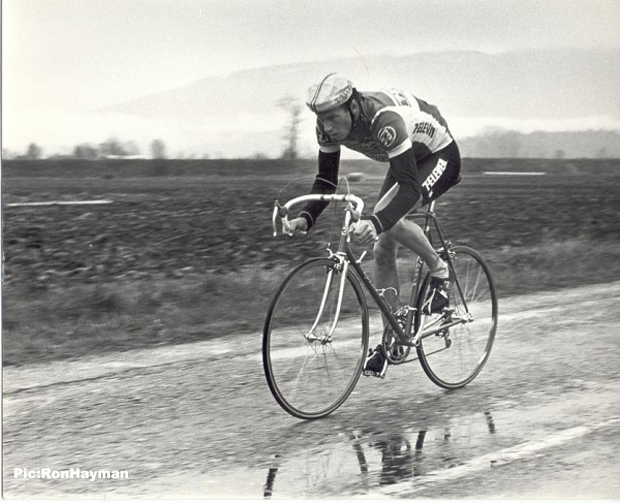 PEZ: You signed for Safir.
I guess they’d seen me race and offered me a contract after the Tour of Ireland win in ’79. The Worlds were at Valkenburg that year, I went out the back with Barry Hoban with about 30/40 K to go – it was tough, chaotic; Jan Raas who won from Thurau.

PEZ: But you were back racing in Canada in 1980?
I’d been riding with Greg Lemond and the credo was to stay lean and eat sparingly but I’d become anaemic and my weight was down under 150 lbs, I just couldn’t go fast so I decided to come home and sort myself out. I got an invite to ride for Panasonic in Canada which I accepted. 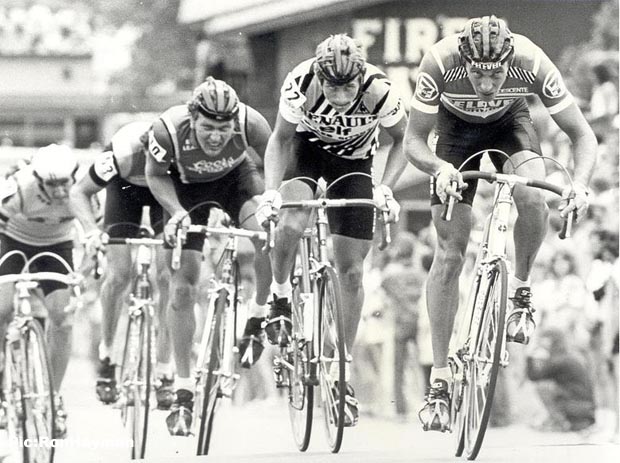 PEZ: Then 7-11 for ’81?
I’d had an offer from Jim Ochowicz to ride for them before but I chose to be involved in forming a team with Steve Bauer, Matt Eaton and Doug Shapiro – but that imploded. 7-11 was a lot of fun, it was a very professionally run team and it was neat to be involved in mentoring the young US guys like Phinney and Kiefel. We were an aggressive squad – we raced to win.

PEZ: You got your hat trick of Gas Town Grand Prix wins during that period.
Yes, Roger Sumner, and Englishman founded the race; a criterium round the oldest area of Vancouver with big crowds – Lance would go on to win it. Those wins got me a lot of notoriety; it was a pretty stressful race for me! 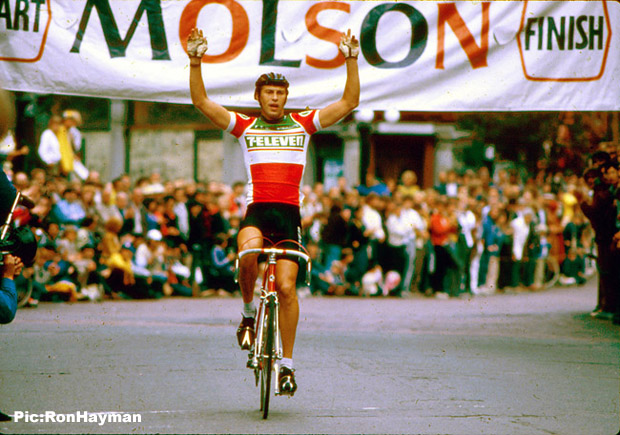 PEZ: Tell us about ‘the richest bike race ever’ which you won in Atlantic City in ’81 – $71,000?
The figures keep on changing on that Atlantic City race as the years go by! There was a $15,000 cash prize for the winner and that attracted the English riders over, Sid Barras and Dudley Hayton were there – they rode at Charlottetown, before Atlantic City and took all the money. After that we trained like crazy with Ochowicz motor pacing us to get ready for Atlantic City – 75 miles with half on the board walk and half on the back streets and I won from Stetina and Hayton.

PEZ: You rode for Mengoni in ’84.
My form was a bit ‘off and on’ that year; Fred Mengoni came across from Italy as a young man and built up a property business to make himself a very rich man. He had a vision of a team but could be a hard man to deal with. His biggest success was probably sponsoring Steve Bauer after the ’84 Olympics – Steve finished second to Grewal at the Olympics, which was probably the best thing that ever happened to him because if he’d won then he’d have stayed amateur. Instead he turned pro and rode the pro Worlds that year in Barcelona where he was third and that launched his pro career.

PEZ: Back to 7-11 for ’85.
Early that season we did the European thing with Besseges, Sicily, Tour of the Med. and Milan-Sanremo; not a full season but it was a great experience. 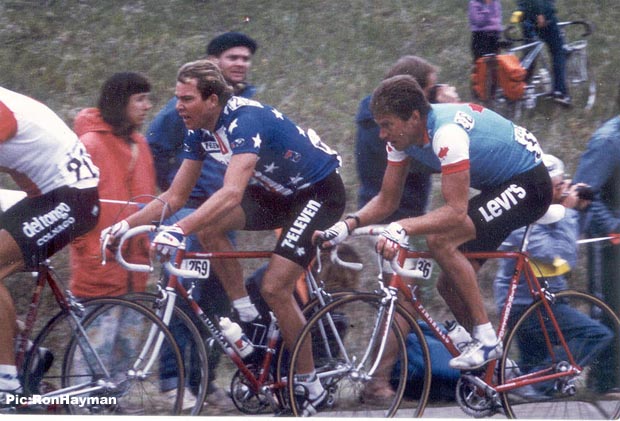 PEZ: Levis in ’86.
That was fun, I remember riding races in the Midwest trying to hang on to guys like Knickman and Hampsten. We rode the Tour of Columbia that year against Hinault and Herrera in his pomp – the crowds went crazy for Hinault but Herrera won. The climbs were really hard and hot; Hinault just soft pedalled them – there were so many good young guys there, small and awkward on the bike but very good climbers. I rode the Tour of Ireland that year, too – for Thor washing machines with Jock Boyer, Ron Kiefel and Gavin Chilcott.

In ’87 I just rode local races – then I went on to be Canadian National Coach. It was a good time to do it because I obviously had a feel for what the riders needed but there was a lot of politics involved and all the budget considerations. I also served as National Director in Ottawa thinking I could make a difference but there was so much politics involved – Quebec models itself on France; it’s different there . . .

PEZ: And you’re still involved in cycling with your custom clothing company and organise the Hayman Classic stage race.
When I met my wife, she was in the clothing industry and the custom digital sublimation dye process had just come about – we began to manufacture team kit in the early 2000’s and still do. We pride ourselves on quality and getting the product to our clients fast – two week delivery. The Hayman Classic is the youth championship for British Columbia for 2015 – putting something back into the sport . . . 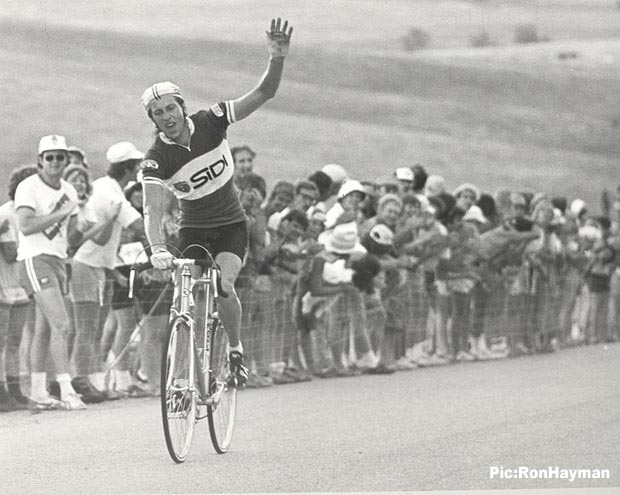 PEZ: What was the result in your career which gives you most satisfaction?
The most prestigious would be winning the last stage of the 1983 Tour of America it was a big long drag race to the line, I was leading out Noel Dejonckheere but he ran out of gears and couldn’t come past me. I was the only non-European to win a stage. And as an amateur I won two Star races in Belgium; 200/250 man fields – the bigger the field, the more I like it !

PEZ: ‘With hind sights’?
It would have been good to accelerate the whole process but kids of 15/16 on the west coast had no mentors back then, as a junior you were only training 120 miles/week and then travelling 100 miles to race. By the time I was 24 I didn’t have that big, broad base that you need – I definitely should have gone to Europe earlier . . . 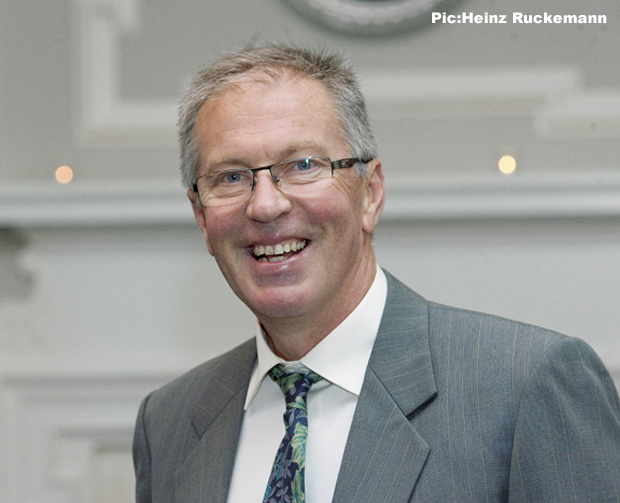