Rudy Pevenage was the man behind Jan Ulrich and guided him to a Tour de France win and many other successes, but let’s not forget he was a top rider in his own Pro career. Not much has been heard of the man from Moerbeke recently, so Ed Hood looked him up on his visit to Belgium for the Omloop.

Yes, that Rudy Pevenage, the guy who was involved in the Jan Ulrich controversies a few years ago. But surely there’s more to the man than that?

He rode in the pro peloton for 14 seasons; Ijsboerke, Capri Sonne, Del Tongo and Superconfex – some of the 70’s and 80’s best squads. He held the yellow jersey in le Tour for nine days, he won the green jersey in le Tour, he stood on the second step of the podium in the Ronde Van Vlaanderen, Tour de Suisse – and The Tour of Scotland ‘Milk Race’.

And he managed some of the biggest names in the sport with teams like Histor and Telekom. We caught up with him at the Restaurant Hemelrijk atop the legendary Muur in his home town of Geraardsbergen, the day after Kuurne-Brussel-Kuurne.

I opened by asking him about how he got his first contract, with Ijsboerke:
“I knew the DS, Wily Jossaert well and I had good results as an amateur. I was second in the amateur Tour of Flanders and of the five big amateur classics in Belgium, I was second in three and third in one.” 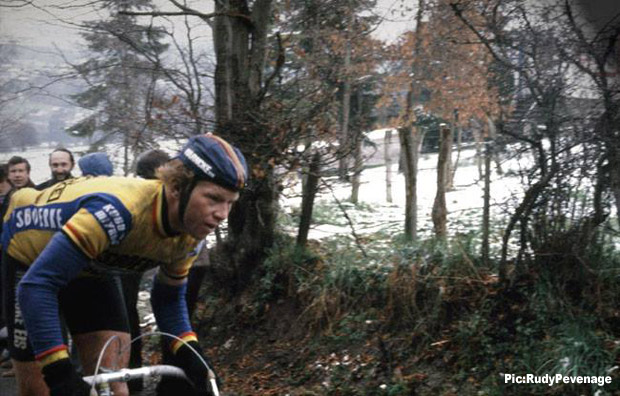 Through the snow in Liège-Bastogne-Liège

Being Scottish I had to ask him about what he remembers of our homeland; after a pause for thought:
“We had to drink milk on the podium!” 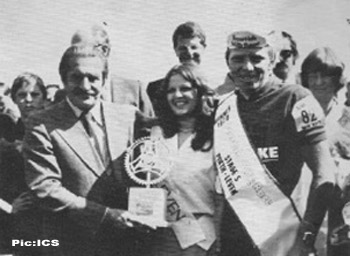 Rudy in the Scottish Milk Race

In 1980 Pevenage won the first stage of the Tour de France and came out of it having held the yellow jersey for nine days and as final winner of the green jersey in Paris. Relive a little of that Tour for us:
“I was a good sprinter and won Stage One – I chased points in the intermediate sprints and when Jan Raas pulled out it was a fight between me and Sean Kelly for green. I also held the yellow jersey for nine days. That was the hi-lite of my racing career and people have never forgotten it, still they speak to me about that.”

How much difference did his successes make to his contract?
“There was a small adjustment to my contract but the money wasn’t like it is now. I did get a lot of criterium contracts but rode too many that year after the Tour, it’s not just the racing but all the traveling between. That had a negative effect upon my next season because I was so tired. Remember that in those days we were racing 140 days. With Del Tongo we rode the classics then five days after
Liège-Bastogne-Liège we started the Vuelta – it was in April back then – to prepare for the Giro. That’s why I was never interested in the six days or too much cyclo-cross – we needed the winter to recover.” 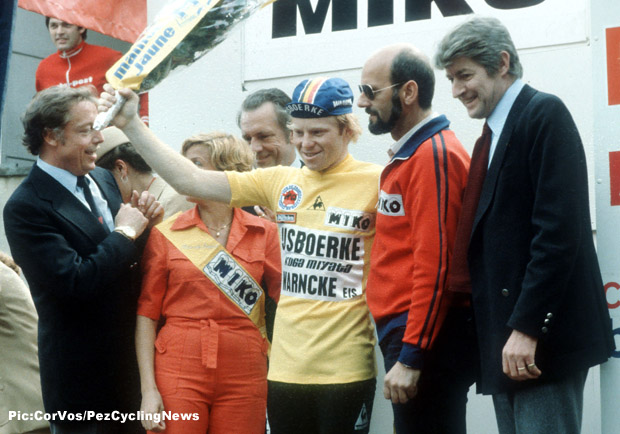 The GP Paul Borremans is a race which appears on his palmarès three times. . .
“Yes, I liked that race, it’s in Viane, not far from here so that is my home race and I knew every cobble stone of the parcours!”

What about second in de Ronde to Rene Martens, he wasn’t a man with a lot of wins?
“No, but he was a very strong rider – stronger than me on that day! I don’t like the new parcours for Flanders now, it doesn’t seem complete without the Muur – but the new route is about politics, nothing else. I used to host a big party on the Muur when the Ronde came over here – think the last couple of Rondes are not as spectacular because everyone waits for the last climb of the Koppenberg”

And the four seasons in Italy…
“It wasn’t a good time for Belgian teams, Ijsboerke was gone and Capri Sonne and Safir also finished so it was hard to get a ride. It was a big difference to ride for an Italian team but I enjoyed the experience. It was all change for me because I became Saronni’s gregario; but we rode a very good program and Saronni produced results – he won Milan-Sanremo and the Giro. I was the time when the Polish guys Piasecki and Lang were with the team; they were very strong and good team riders. I would train with Piasecki and the last 30 K it would be him at the front and me at the back!”

Pevenage’s career encompassed the Merckx and Hinault eras…
“I rode two years against Merckx but his career was on the way down. Hinault was the best guy I ever rode against, so strong and with a good physique – but he was strong in the mind, too. I was away in Liège-Bastogne-Liège and he was the first to join me in the escape – he went on to win by nine minutes that day.” 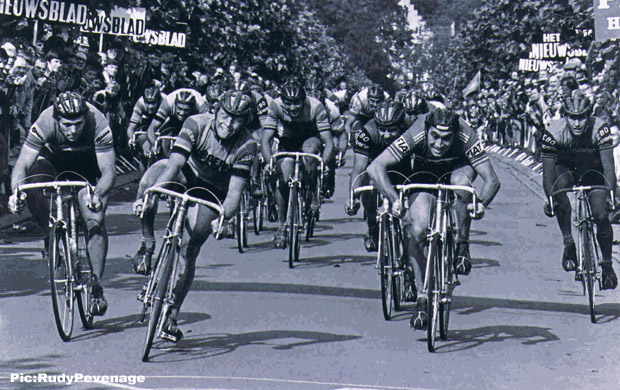 Tell us about the change from rider to manager, wasn’t that difficult?
“No because I had been road captain for Saronni, I used to decide tactics and tell the guys how to ride.”

Rudy and Jan at Telekom

What about his ultimately fated relationship with Jan Ulrich?
“I was in management with Telekom and when Jan joined I could see his talent. In the 1996 Tour de Suisse I could see how well he was riding and said to Walter Godefroot that we should substitute Jan for the Danish rider Peter Meinert in our Tour team and Jan rode an excellent Tour in support of Bjarne
Riis. Jan was always grateful to me for speaking up for him and we were together from then on.”

Is he still in touch with the big German?
“Yes, he’s the only guy from my career who I keep in touch with; he organises events for cyclo-tourists now – I think he’s taking people to the USA, Austria and Spain to ride?” 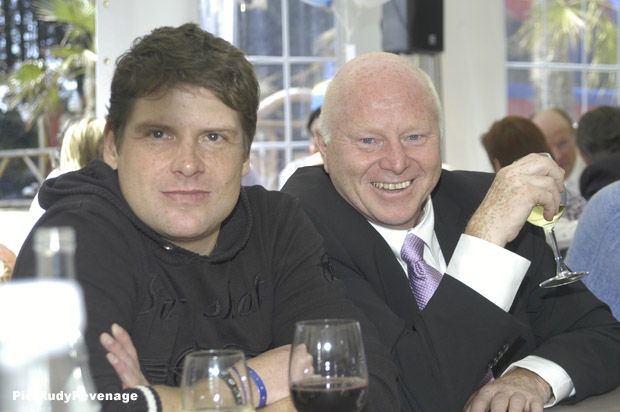 Rudy is still in touch with his German prodigy

Pevenage was in a managerial role with Histor, La William, Telekom, Coast, T-Mobile – and Rock Racing in the USA; we just had to ask about that.
“It was a great experience, I got to see Mexico and Colombia with our programme; and we had some strong results – Mancebo winning Stage Three of the Tour of California was a big win.” 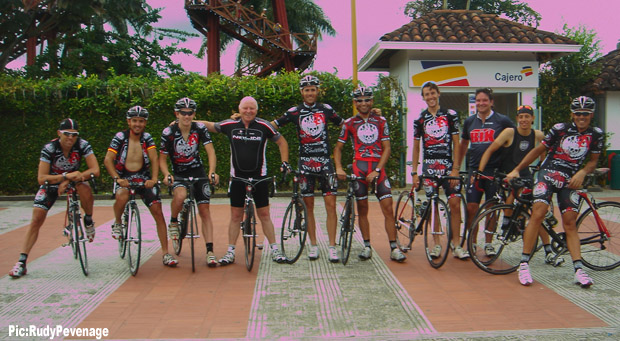 With the Rock Racing team

What were the hi-lites of his managerial career?
“When I had three riders on the podium at the Sydney Olympics – Ulrich, Kloden and Vinokourov, that was special. And of course Bjarne Riis winning the Tour in 1996 was a hi-lite, but the victory of Jan in the Tour ’97 was the most beautiful experience, very emotional, Zabel winning Milan-Sanremo, there we’re many. . .”

‘Why quit?’ was the next question.
“I had no choice; they came after me, Saiz and a couple more names; but really that year they sent Basso, Mancebo, Ulrich, Bottero and Sevilla home from the Tour start they should have sent half of the peloton home – maybe no one should have started. After that I was one of the “black sheep”.

Did he have any regrets as a rider or manager, his answers reminded me that it was a whole different ball game back them.
“Regrets? No, not with my pro career and I’m happy with and proud of my results as a manager. The Biological Passport should have been in place between 1998 and 2006 – if it had been I’d still have a job. I have a good life, a good job in real estate but I watch the cycling on TV every day, it’s still my passion, it’s in my blood…” 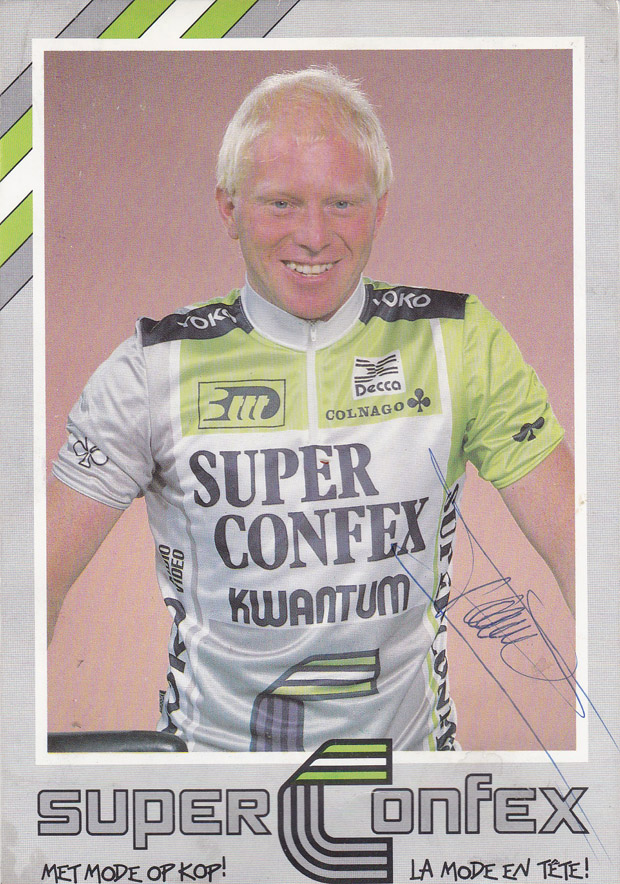