Colby Pearce is the quieter, more subdued half of the successful Holloway/Pearce pairing on the Six Day circuit. Co-founder of the juggernaut that is now Garmin-Transitions, Colby recently sat down with our man in the Six Day trenches, Ed Hood. Read on!

PEZ: You must be disappointed not to renew with Garmin?
I actually have not raced with Garmin since 08. Garmin does not have a program which is geared towards the track specifically anymore. I helped start that team back in 2003 (when it was TIAA-CREF) with Jonathan, we have been friends since we were juniors. He came to me after he stopped racing and said “I want to build a team for young guys” and so we did it. We are a good pair because he was out making the big deals, shaking hands and kissing babies while I was dealing with spreadsheets of frame sizes and Oakley orders. But last year I did not really fit into the program anywhere specifically, and the team has come 720 degrees from where it was in the beginning in so many ways. So, it was time to move on. 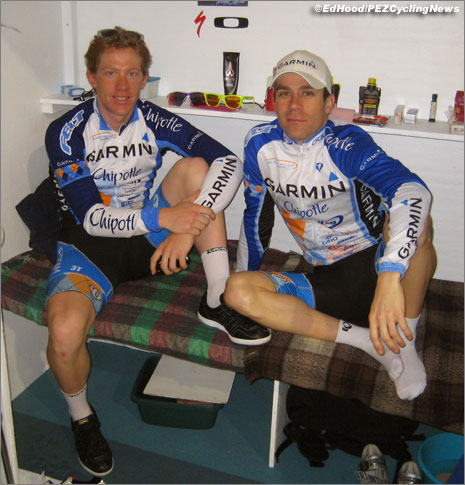 In 09 I was approached by Dan Schmatz to race for Big Shark p/b THF Realty out of St Louis. The team is based in Missouri but we have a strong Colorado contingent of riders who are super low key, but motivated to win races. Its kind of a team of “former top pros who wont quite give it up” – Scott Moninger (former Coors Light, Health Net, and just about every other team in the US), Schmatz (BMC and Health Net), myself, Brent Hanlin, Mark Southard (AC Pinarello, from many years ago), Kelly Ruddick, Jeff Hartman, and we had Keith Harper as a guest rider (Motorola). Its a ton of fun and a perfect blend of seriousness and not so serious. I will race for them on the road again in 2010. We mostly do local events in CO but go to Missouri twice a year for the NRC Tour De Winghaven and the Gateway Cup criteriums. Last year we got smoked in Winghaven (it was super hot and had been 45 degrees in CO, we all melted) but we won all four days of Gateway.

PEZ: Tell us about 3-0-3.
303 racing is the club for the cyclocross team I raced for this fall, which is a super solid program. The sponsors are Hudz and Subaru, we had a great roster for CO racing – Jonathan Baker (CX Nat 35-39 champ), Matt Pacocha (also a technical writer for VeloNews, he won about a dozen CX races in CO this year), Brad White (road pro for United Healthcare). The 303 shorts I rode in the 6’s this year are made by Panache – more on this below… 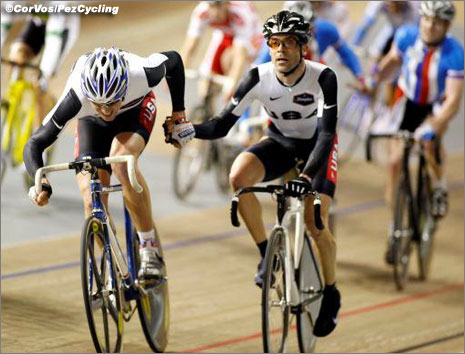 PEZ: From Pro Tour to grass roots, again – how does that feel?
It is what it is. I have not focused on the road for a long, long time. The track is my best playground, and even when I rode for Garmin I was not on their UCI road roster, they supported me as a track specialist. So its not like like I went from racing in Europe on the road to doing local races in Colorado.

PEZ: Tell us about Panache – the “best shorts you’ve ever ridden.”
My neighbor, Don Powell, is the Grand Poobah at Panache. I met him when we were riding home from a local race last year, and he offered to supply me with a bit of their clothing in exchange for some feedback. After twenty years in the sport, I can say his shorts are the best I have ever ridden, hands down. All of his clothing is made in Italy and is super dialed in. I work with him on an ongoing basis, providing feedback on minor adjustments in fit or details like zippers and so forth. He is willing to listen to the smallest piece of input, and is very motivated to make a really ideal product. We also theorize about new Panache products for the future. Don used to work at Pearl Izumi, so he brings a wealth of experience to the marketplace.

I have also developed relationships with a few people at Pearl Izumi from when I rode with Slipstream. I am riding the new Pearl Izumi Octane shoes this season, which is super cool because they fit me amazingly well, and they have the same last and sole for both road and off road, so I can use the same shoe effectively for track, road, CX and MTB. This is important for me because I switch bikes constantly. The shoes are also super light, which is a bonus. 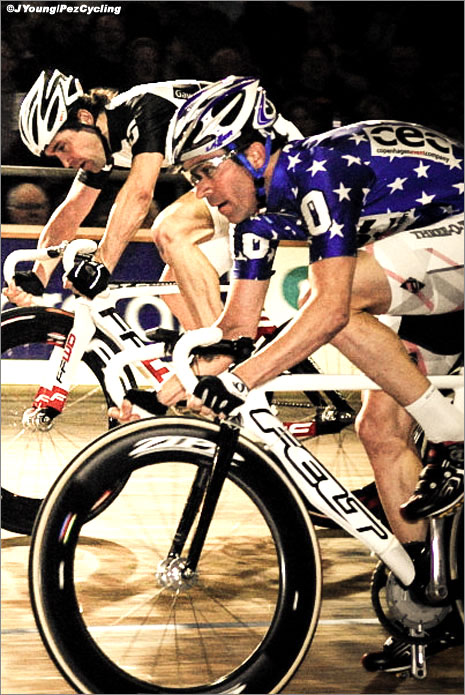 PEZ: You’ve been riding ‘cross?
Yes, I have been racing cross pretty seriously for a few years now, and actually have become respectable at it – which is amazing because as a junior rider I was pretty much guaranteed to come in last in every cross race I entered. I really enjoy it, and it works out well for track training (believe it or not) because speed comes relatively easy for me, but torque and ‘pop’ are always aspects of fitness I must emphasize in my training, and cyclocross happens to be filled with accelerations.

PEZ: And mountain bike?
Last season, I changed gears a bit and did quite a bit of mountain bike racing, which is something I have always wanted to do more of. I love cross country mountain biking. I did two stage races, the Breck Epic and the Pisgah stage race in North Carolina, and both of them went quite well in spite of many mechanicals and flats. Its such a challenge to line up for a 4 hour cross country event and start by going as fast as you can in the first 5 minutes, pretty much flat out. The concentration required on the descents is extremely demanding – it is very parallel to madison riding in that respect.

The National Championships are in Colorado this season, so I will have a go at those and see how I can do. I have cracked the top 10 in the 50 mile Nationals, but the cross country will have a better field, so the challenge will be steep. 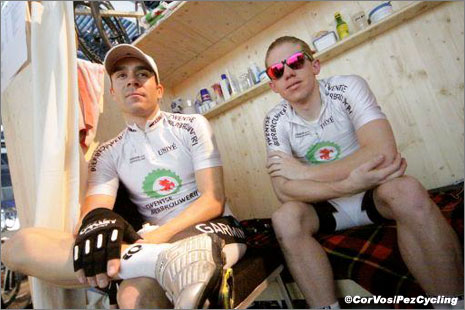 PEZ: Highlight of your year – and your six season?
Apart from Copenhagen, this year on the track has been a disaster. It began with the Manchester World Cup, where neither Holloway or I had great legs, although we managed to get a few points in the madison. Then I went the the Munich 6 day and crashed in the first 20 minutes of the first chase, where I broke my collarbone and tore my soleus muscle. My recovery from the crash went relatively well, but I had complications from a minor surgery around Christmas which led to me having even worse legs in China for the final World Cup. I did not make the finals in either event! It was awful, there nothing like flying halfway around the world to get your ass kicked. Ten days later, however, I got it together and felt great in Copenhagen, Daniel and I almost won the 75km handicap chase, which is one of the longer, harder chases in the entire 6 day season. Cycling is very strange in that at times, your form can turn on a dime…sometimes one tiny detail can make all the difference in the world.

PEZ: If you had to choose, just one: road/track/cross/mountain bike?
Oh boy, that is a really tough one. Road is actually my least favorite of all the disciplines, I think because you can have such a strong ride in a road event and cross the line in 54th place if the race goes a certain way. I love the solitude of MTB racing, it really is you against yourself and the mountain first, then against the other riders. If I had a gun to my head, it would be close, but track would win out. I just love racing on the boards. There is nothing like racing a world class madison or points race and having it go well. 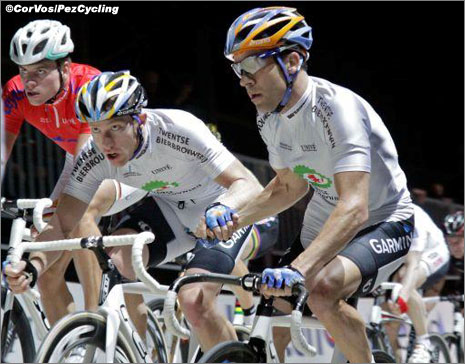 PEZ: Are you going to the track Worlds?
I am not sure yet, USAC has not announced the team, but I think we have demonstrated we can be competitive this year. I hope so!

PEZ: Goals for 2010?
Win a medal at Worlds. Win a stage at the Breck Epic. Top 10 at MTB Nationals would be super cool. Win lots of CO races with Big Shark, and more of the same in ‘cross with Hudz/Subaru. 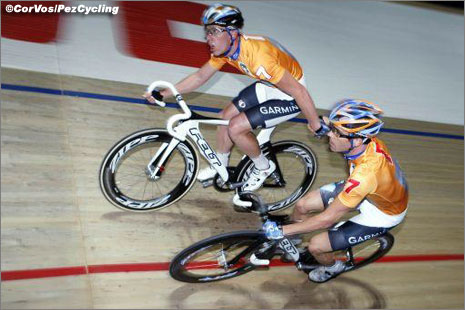 PEZ: Mountain bikers can keep on going, age isn’t such a factor (Ned Overend) – is that the plan?
Juan Llaneras was over 40 when he won the points race in Beijing, so I would not say that its only mountain bikers who can keep going…

I am not really sure. For the moment I keep competing because my love for racing and training continues to outlast my disdain for travel, packing bikes, coming home to huge piles of mail, and missing my family. But the balance is beginning to tip…

PEZ: You ride a 12 month season – how do you avoid staleness?
Being hopelessly and completely addicted to bike racing certainly helps! I just take a short break after Worlds, and then I am right back into it. Maybe I am part Aussie, but I think much of it has to do with changing emphasis – track, road, MTB, CX, I just rotate disciplines seasonally and it works for me. The only thing I get sick of is doing the same road rides over and over again around here. After 20 years of training on the Colorado front range, I could use some new roads! 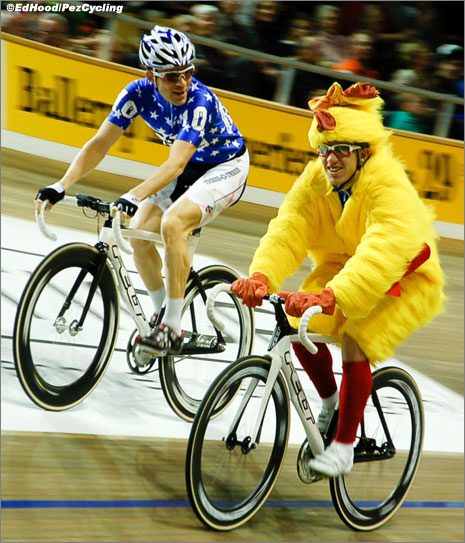 PEZ: You have huge knowledge – coaching must be something you’ve considered?
I am already coaching about 20 riders how, its a small business which has been growing since about 2003. I will continue to expand into coaching as I move away from international racing. Its something I really enjoy very much and it seems to be a natural extension of my career in cycling. It has just grown through word of mouth, I have not promoted it or anything – I am only just now getting around to building a website!

PEZ: How many more seasons?
That is a good question. As for now, I am only thinking through Worlds and this summer.

***
with thanks to Colby for his time and wishing him all the best for season 2010!

Top Ride: From The Mountains To The Sea!