Who makes sure the wheels turn smoothly during a six day race? The mechanics are the men who change the gears, stick on the tyres, endlessly polish the paintwork and pick up the pieces after crashes. They arrive first to build the bikes up and leave last after having stripped the bikes down for transit. What makes a man want to roam Europe, often driving a thousand kilometres through the night to get to the next race – or to get home? PEZ spoke to circuit spanner man, Dirk Dekeyser at the recent Grenoble Six.

PEZ: Your shop in Drongen, Gent is a family business, Dirk ?
Dirk Dekeyser: My great grandfather started the business in 1920, he built his own frames, back then. My grandfather ran the shop until 1988 and then I took over.

PEZ: How did you get into race mechanicing ?
DD: The Belgian national coach and former six day man, Michel Vaarten asked if I would help the national squad mechanic at some track World Cups and then the track World Championships – it led on from there. 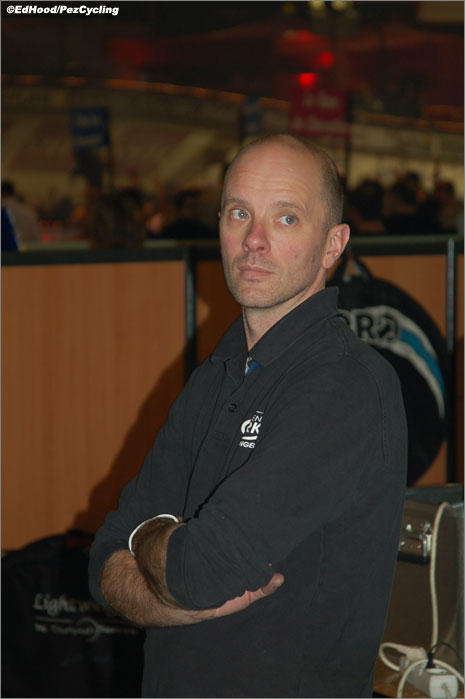 PEZ: Typically, how many riders do you take care of?
DD: Sometimes just two; at Berlin I only had Michael Morkov and Alex Rasmussen. But here at Grenoble in 2009 I had eight. I mostly look after Belgian, Danish and Dutch riders.

PEZ: Do you work on the road, too ?
DD: I help the Belgian pro team Topsport Vlaanderen; they have staff mechanics but if their programme is heavy then I’ll come in on a ‘daily’ basis. Recently I did the Circuit of Lorraine and Bayern Rundfahrt for them.

PEZ: ‘cross?
DD: No, I don’t really like the behaviour of a lot of the fans at cyclo cross races – throwing beer at riders. Imagine if they did that at a six !

PEZ: Mountain biking?
DD: Just to watch; I have a couple of guys who work in the shop and they are crazy about it. We stock mountain bikes, it’s a part of out business.

PEZ: What’s your favourite part of the job ?
DD: Working with the bikes – when I’m in the shop so much of my time is spent on admin I don’t really get the opportunity to work on bikes at all. But here you’re working with them all the time – that’s what I really enjoy.

PEZ: And the worst ?
DD: The travelling; I have 1200 kilometres to cover to get home after this.

PEZ: You must have seen a lot of changes in equipment ?
DD: It was steel frames when I started but then aluminium came along – many of those weren’t any lighter than the best steel frames. Then it was the time of carbon – it’s all commercial and nowadays things evolve fast. The big selling point with the first carbon road frames was that they absorbed the road shock – but now they are always making them stiffer. And the integrated seat post design makes them even more rigid – you need a massage after every ride on one of those ! 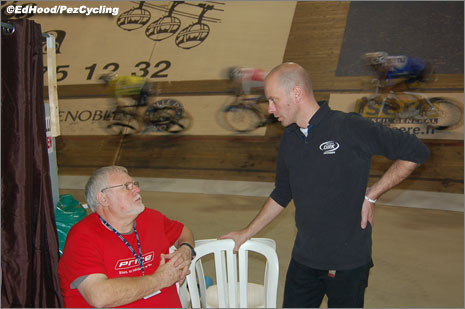 PEZ: What get hits hardest on a six day bike ?
DD: Tyres and handlebar tape; in the old days the headsets took a lot of punishment but now, with the integrated system, I can’t remember the last time I changed one. It’s not like the road where a lot of dirt and water is flying about.

I like the BB 30 bottom bracket system, the axle is shorter, there’s a narrowerer ‘Q factor’ (overall width of crank faces) and it’s much stiffer.

And now there are asymmetric chainstays – it never stops!

Focus now have a rideable bike with off the shelf equipment, which is less than five kilos.

I think that the UCI should look at the minimum weight restrictions, the light equipment is safe, now.

PEZ: Do Continental tyres still rule the boards ?
DD: My guys are on them – Danny Stam rides Vittorias, they sponsor the team and the Swiss guys ride Schwalbes – but I still like the Continentals. 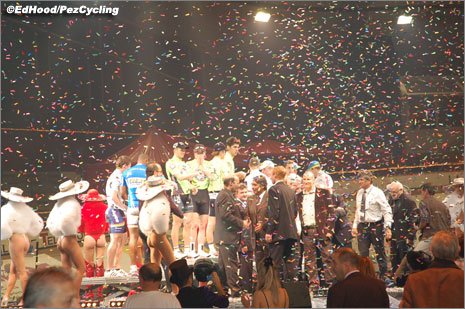 PEZ: Who’s the fussiest rider?
DD: Michael Morkov; he sees everything. I hate when the cabins are laid out so that the riders can see the bikes, Michael sits and looks at his machine all the time – he always sees something. But that’s part of the reason why he’s so good – that professional attention to detail.

PEZ: Who just let’s you get on with things ?
DD: The older guys, they know I’ll take good care of their wheels and tyres and that’s the main thing. The young guys are into things looking good – white saddles and stuff like that.

PEZ: What do you like least about the circuit ?
DD: The crashes; I was there when Isaac Galvez had his fatal crash at Gent, my rider, Dimitri Defauw – who is dead now, too – was involved in the crash. I had to walk past Isaac to recover Dimitri’s bike – I’ll never forget looking down at him as he lay there.

PEZ: What do you like most about the circuit ?
DD: It’s one big family, there might be different mechanics and soigneurs looking after different riders but it’s all one little world. 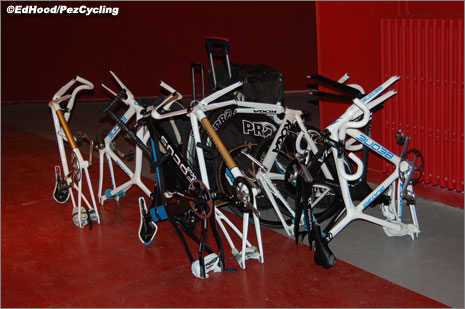 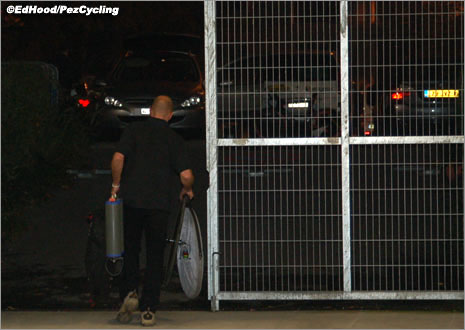 The mechanic’s job is never done.

***
There’s a postscript – as I helped Dirk carry the bikes up to his camper van at wearing on for 02:00 am on Wednesday, he turned to me and said; ‘for the interview, when you asked about what I don’t like – I forgot about this bit !’