PEZ Talk: Six Day Up And Comers East And Carroll

They may sound like a lounge singing duet, but there’s no schmaltz to these guy’s mission; they’re trying to build a career playing to that most demanding of houses – a six day crowd. We caught up with the two 22 year olds – Guy from Indianapolis and Austin from Orange County – a few days into the six days of Grenoble.

PEZ: How did the two of you get in involved in cycling in the first place?
Guy: My dad was into cycling, but the biggest influence was growing up in the Lance era, watching him win all those Tours. Now that I’m on his development squad, it’s a dream realised – hanging out at his house, getting to drive his cars! I couldn’t believe it, when Axel Merckx called me and asked if I wanted to join the team. I’m team mates with Olympic riders like Taylor Phinney – it’s a nice team and they have no problems with me riding the winter tracks. 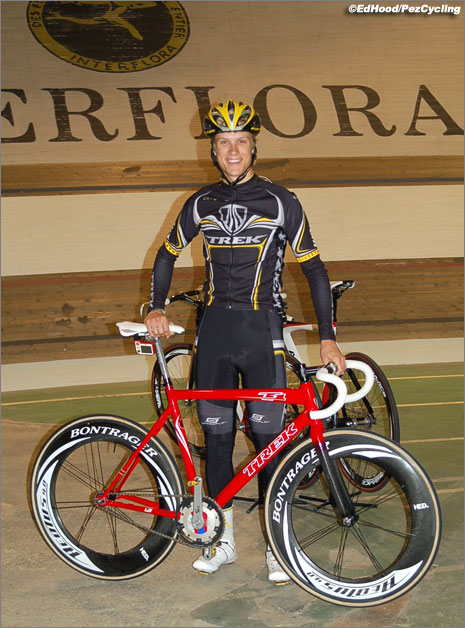 Austin: My parents were into cycling, it was just something we’ve always done. I got into BMX first and then when the LA track opened, I started to cross train there. I got into it and eventually did well in the U23 Nationals. I was with the BMC U23 team, but I’m not sure about what I’m doing for 2010. 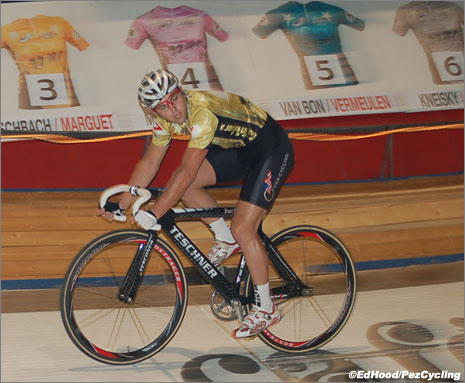 PEZ: Why track, we thought all the young guys wanted to be Lance or Tyler Farrar?
Guy: I ride both track and road, but I’d love a career in the sixes, it’s something I’ve dreamed about. The atmosphere is great and the lifestyle, all in this completely focussed bubble – I love it.

Austin: I’m a road rider, the sixes are for fun and fitness. I really enjoy racing in Holland, I like all that cross wind riding, up there! 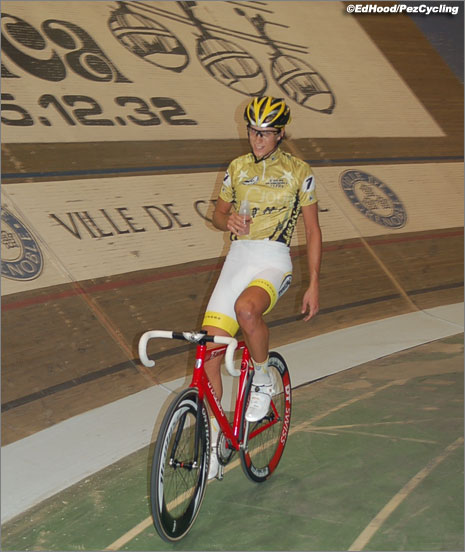 Guy cooling down after the chase.

PEZ: Who were your role models?
Austin: Lance, Erik Zabel – and Bruno Risi, once I started paying attention to the sixes.

Austin: Stuart O’Grady – he’s a rider that can do everything, road and track. I was into Tyler Hamilton, too – but that was before all that stuff happened – and George Hincapie. 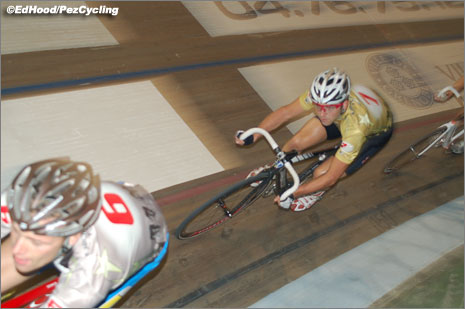 Austin in the wheels.

PEZ: Your first amateur six was?
Guy: Amsterdam in 2007, it took us two years to learn the ropes, there’s not much madison racing in the US and there’s a lot you have to learn. That’s why we came to Europe.

PEZ: You got this ride by winning the UIV cup.
Guy: Yeah, that’s the competition for U23 six teams, some of them aren’t full sixes, just three days. They take your best four finishes to count for the championship – we won at Munich and Dortmund and had second at Gent. One of the prizes is that it gets you into a couple of “full” sixes, the following season. 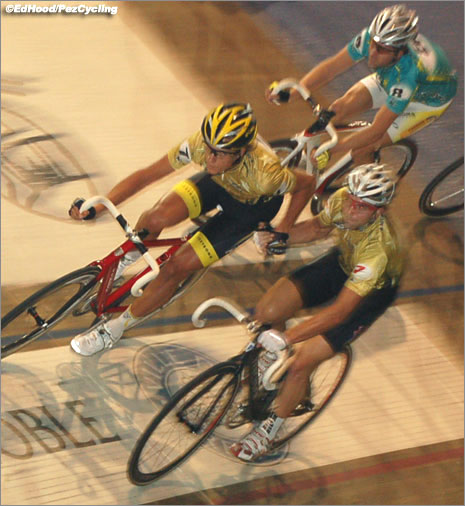 Carroll and East formed a very successful duo at the U23 level – now they’re moving up to the big time.

PEZ: What do you think of this race?
Guy: It’s a nice race, a good one to learn in because the programme isn’t so intense. It’s just a shame that I was sick for the first two nights – that didn’t get us off to a good start.

Austin: And now I’m sick! There’s a bug going round; coughing, bad throat – it’s a good race, but I wouldn’t mind if there were a few more races in the programme.

PEZ: And is it how you thought it would be?
Guy: Pretty much, but it’s much more organised than I imagined it would be. At the amateur sixes, you just turn up and ride, you have to do pretty much everything for yourself. But with the pros you have the traditions, your soigneur, the washing gets done, for instance – all the food is prepared and everyone knows exactly what’s going on. 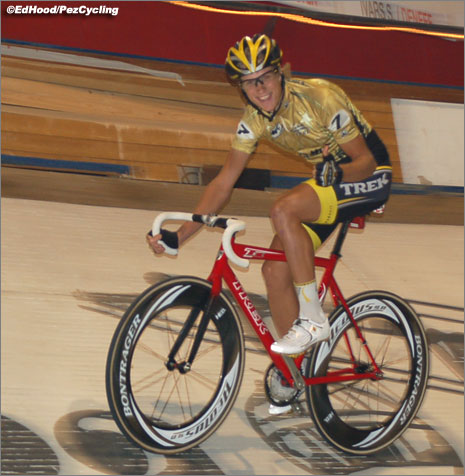 PEZ: What are the career plans?
Guy: A pro career where I ride road in the summer and do the winter sixes. I know that some teams aren’t keen on their riders doing the sixes, but I think that the unique exposure you’d give a sponsor with a US guy in the sixes would marketable.

Austin: Definitely a pro in Europe – doing one day races.

PEZ: Will we see you at the Worlds in Copenhagen?
Austin: We’re not sure yet, it’s too early, it will probably be February before the selections are made. There’s us plus Daniel Holloway and Colby Pearce to cover the points, scratch and madison.

PEZ: What do your friends and family think of your lifestyle?
Guy: My family has a tradition of being involved with education, so it was hard for them to take, me not going to high school. But now they see how serious I am about it, they’re very supportive and come to watch me race.

Austin: They love it! They come to watch me, whenever they can.

PEZ: What do you miss about the States?
Guy: I do a lot of hiking and rock climbing back home – I miss that. And ‘In and Out’ burgers – I really miss those!

Austin: My own bed, good coffee, my dog – and Mom’s home cooking! 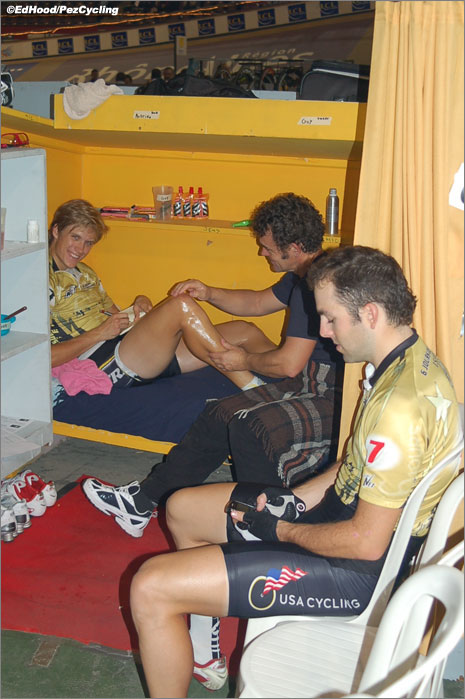 PEZ: Could you live in Europe?
Guy: Yeah, Spain, it’s nice weather and tranquillo – the Italians are too crazy for me !

Austin: Southern Italy would be good for me.

PEZ: And will we see East & Carroll in the maillot jaunes at Grenoble 2010?
Guy: I’d like to think so, we want to do a lot better, next time; neither of us have been at our best, here – but c’est la vie !

***
They’ve even got the language nailed! With thanks to Guy and Austin – you never know, Pez might even be running for them, one day!