Rider Interview: We are not really sure if Mia Manganello Kilburg is a ‘Speed Skating Cyclist’ or a ‘Cycling Speed Skater’ but whichever, it was about time Ed Hood caught up with her to fund out about her Olympic aspirations. 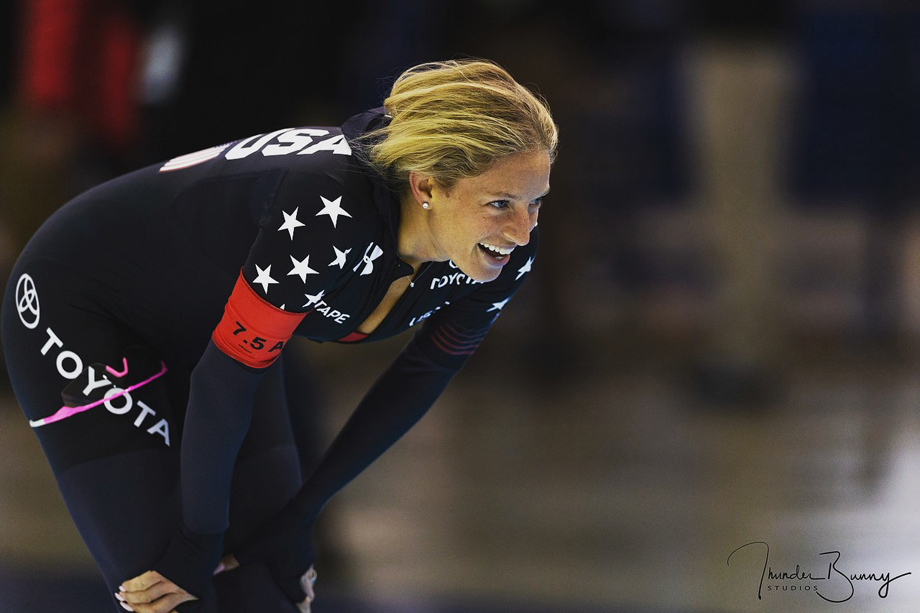 It was back in August 2017 we last spoke to Mia Manganello Kilburg; she was about to put her cycling career on hold and concentrate on her first love of speed skating with a view to making the Winter Olympic Games in China. Her agent, ex-pro Mike Englemann thought we might like to catch up with her as she takes up where she left off with her cycling career, riding for UCi squad DNA Pro Cycling. 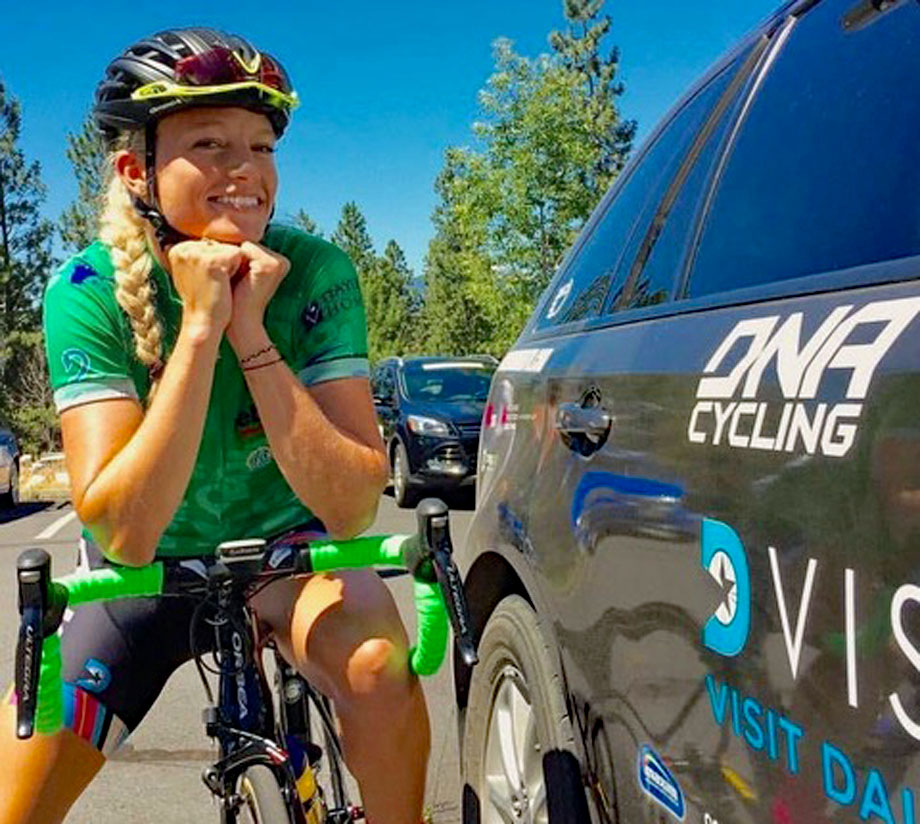 PEZ: The Winter Olympics, PyeongChang, did you make it and how did it go?
Mia Manganello Kilburg: I was extremely honored to have made my first Olympic Team in 2018. I qualified in three events, the 1500m, Mass Start and Team Pursuit. The first event for me at the games was the 1500m. Unfortunately I was ill going into this race so I just did my best, which is all I was looking to do anyways; a medal was not in sights for me in that event. Next was the Team Pursuit. This was going to be the first time the three of us, Brittany Bowe, Heather Bergsma and myself, would be racing with one another. We knew we were capable of a lot but still not sure what to expect. After three rounds and the help of our fourth teammate Carlijn Schoutens, we were able to earn the bronze medal. This was the first medal for USA Long Track Speed Skating since 2010 and the first one for the US women since 2002.

I ended my first Olympics with probably the most fun of races, the Mass Start. I was racing this along with my teammate again, Heather Bergsma. The race was going just as we hoped. We sat in the back and waited for the right moment for me to go to the front and lead Heather out for the medal. After pulling off with one to go, much like bike racing, ‘you know what’ happens and Heather wasn’t able to cross the line top three. I have no regrets or disappointments from my first Olympics. To become an Olympian was the dream then to walk away with a medal was a very delicious cherry on top. 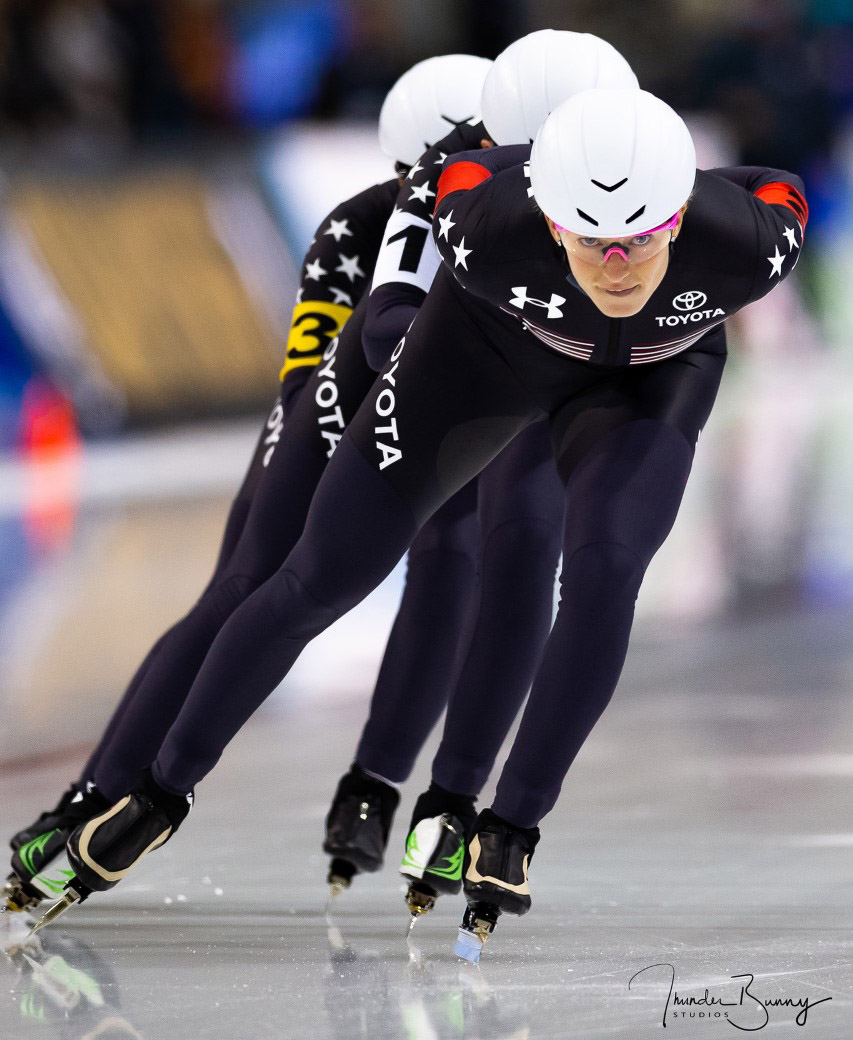 PEZ: The ‘team pursuit’ – any similarities to the cycling event of the same name?
I would say it’s pretty much the exact same concept. The only real difference is we race with three girls instead of four. It’s all about working as one and sharing the work load to get your third skater across the line as fast as possible.

PEZ: Why back on the bike competitively now?
I missed it. Plus it’s amazing training for skating. I love it as well for breaking up the monotony of training/living only one sport all day every day. 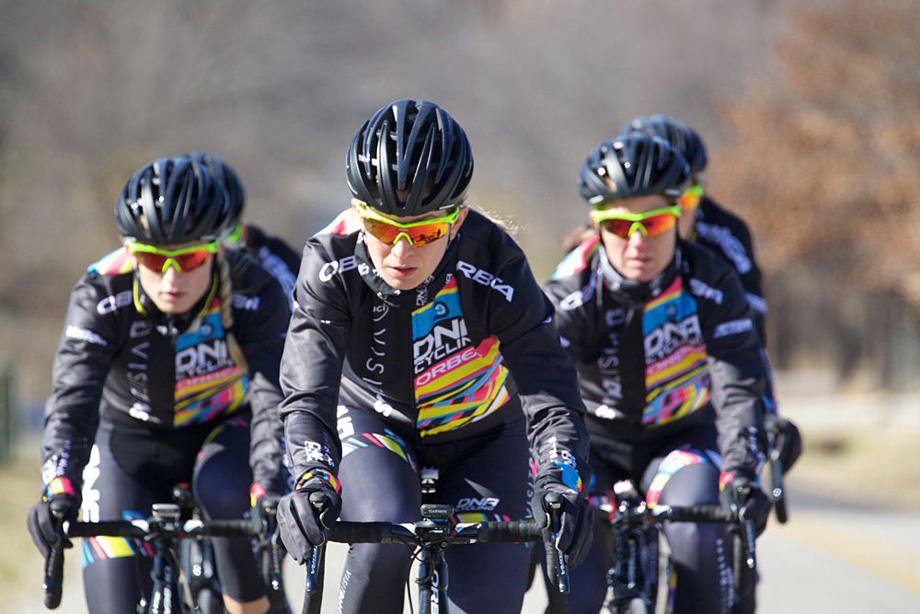 PEZ: When will you get back on the ice for 2022 and the Beijing Games?
Well,Yes, I actually haven’t stopped skating. I’m currently wrapping up my skating season that began in October. Then I’m jumping right out to the road for bike season at the end of March.

PEZ: Do you have specific goals on the bike or just take it as it comes?
I don’t have defined goals for cycling right now. I’m sure they will develop as the season goes on, but I’d say my goal right now is to be a good teammate. That’s one of the biggest things I miss when I’m not racing bikes is the team atmosphere. I’m so grateful to have the DNA Cycling Team welcome me back, and I’m planning to give them all I’ve got. 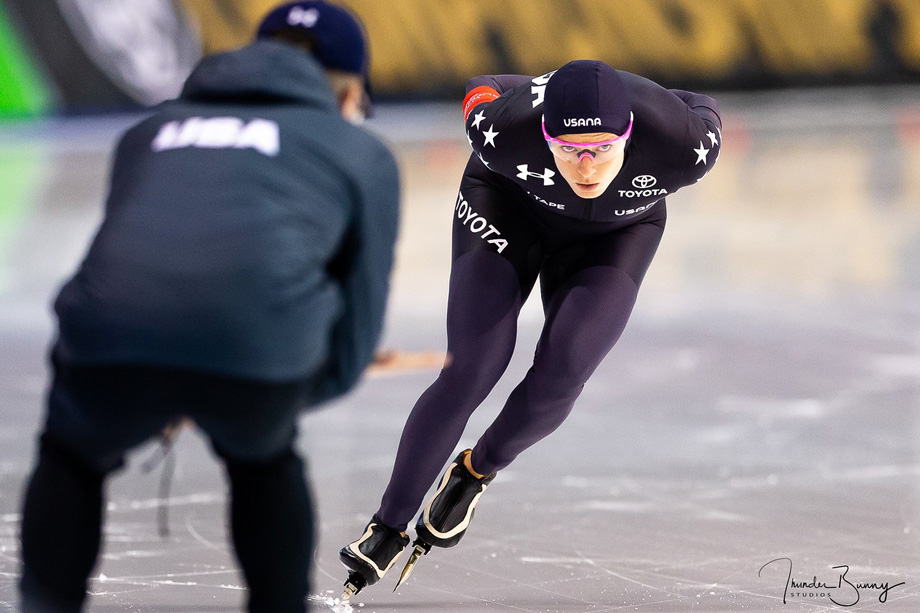 PEZ: Do you have a bike and ice coach?
Yes, I do. I’m a member of the US Long Track National Team coached by Gabriel Girard and I’m lucky to have the help of Corey Hart on the cycling side. The toughest part is knowing which sport takes priority, because I’m not sure it would be possible to go all in on both sports. So right now my cycling training takes a bit of a backseat and comes in when it can while skating has priority. This means I haven’t been able to put in the traditional amount of training for cycling one would in the winter months because I’m having to travel the world and complete at World Cups for skating. Now that the skating season is coming to an end I’m now able to put more focus on cycling specific training. It’s all a fine line to make sure I’m giving myself enough rest as well to avoid over training or burnout. I’m extremely grateful to have such an amazing team helping me.

PEZ: Do you know what your program is yet?
I don’t have a locked tight schedule yet but I do know we’re going to be ripping up some USA Crits! Along with maybe some one-day races or hopefully Colorado Classic. 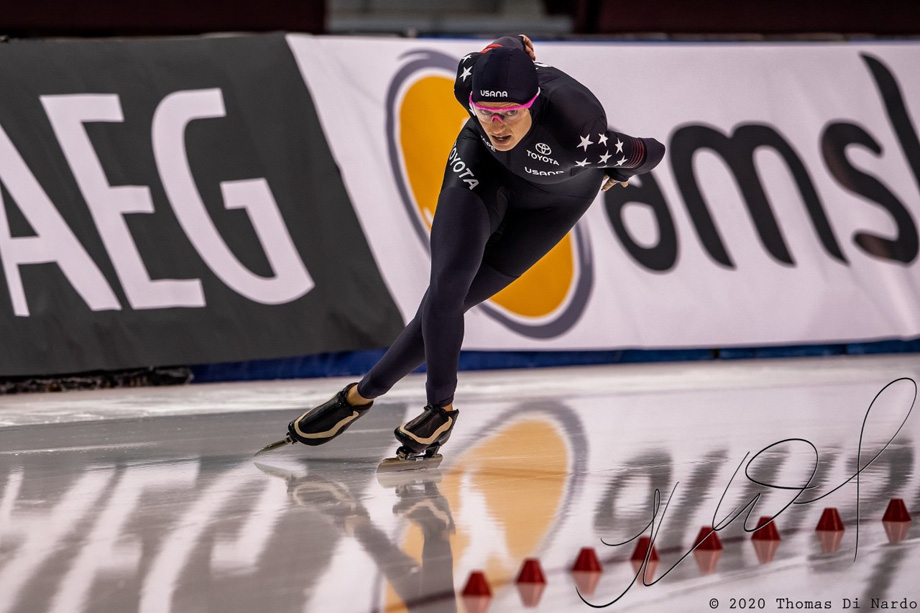 PEZ: What bikes are you on – are you a ‘tech girl’ or do you just ride what’s handed to you and leave it to the mechanics?
The rocket this year is the Cannondale System Six paired with Enve wheels and Rotor power meter and cranks. I’d have to say I’m not a ‘tech girl’ but I know enough to get from point A to B. But yes, I think it’s best to leave it to the Pros.

PEZ: Will you be team pursuiting again for Beijing 2022?
I hope so! Of course making the team is the first step but yes I would love the opportunity to represent my country again. 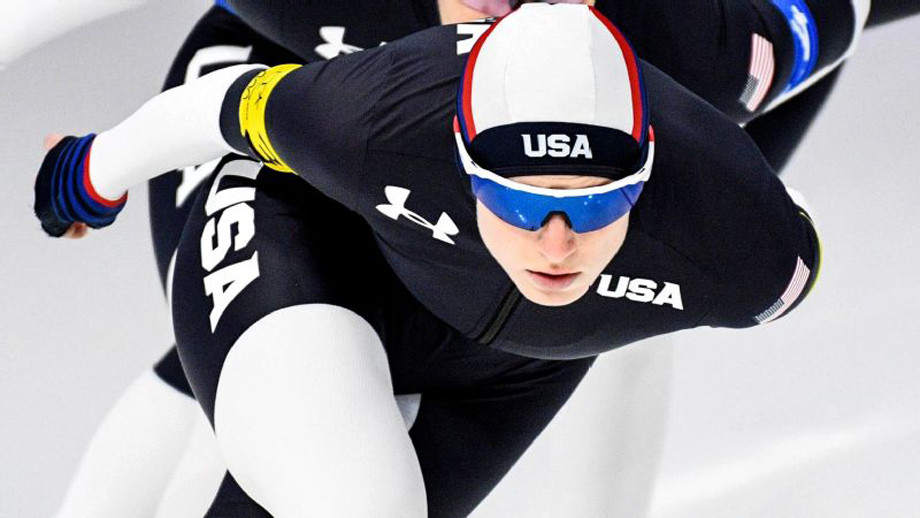 PEZ: Will you still be biking when back on the ice?
I’m constantly biking. Even when we’re traveling for World Cups. I take my bike everywhere I go.

Cycle tracks vary in terms of ease of riding and speed – are ice rinks like that?
Yes. There are a few different factors that go into making an ice rink faster or slower than others. The biggest one being air pressure. This makes it so that a rink in Salt Lake City, Utah or higher altitudes will typically produce faster times then a rink closer to sea level like Milwaukee, Wisconsin. 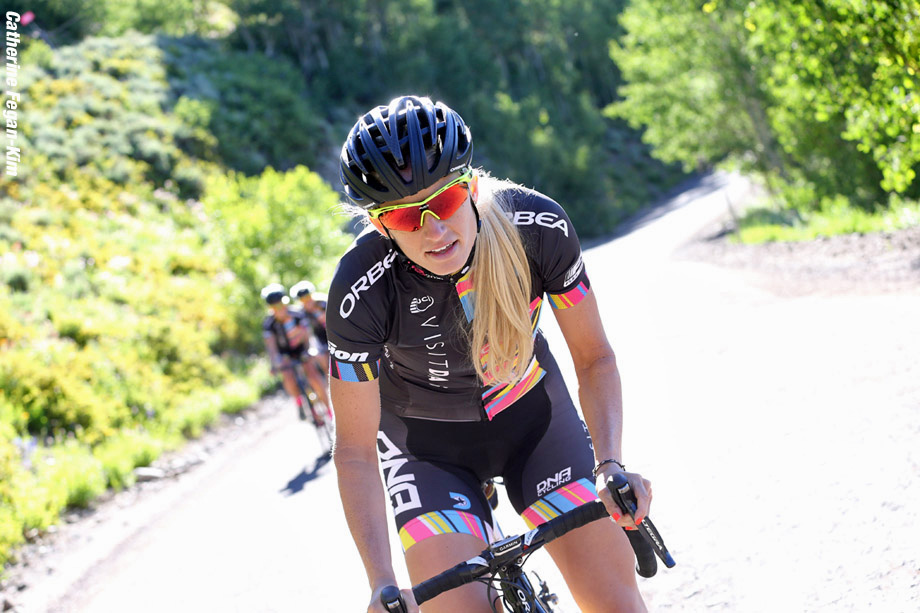 PEZ: Those skates look kinda old fashioned with all those laces, cycling is now into sophisticated wire closures, why the ‘old school’ fastenings?
I would say “traditional” vs “old school”. I think with laces you’re able to get a more evenly distributed pressure throughout your foot vs just having a couple of wire dials. I think the dials work great for cycling but for speed skating you need a bit more support than that.

PEZ: Will we see you back in the peloton after Beijing?
It’s hard to say. I’m keeping my sight close range for now. 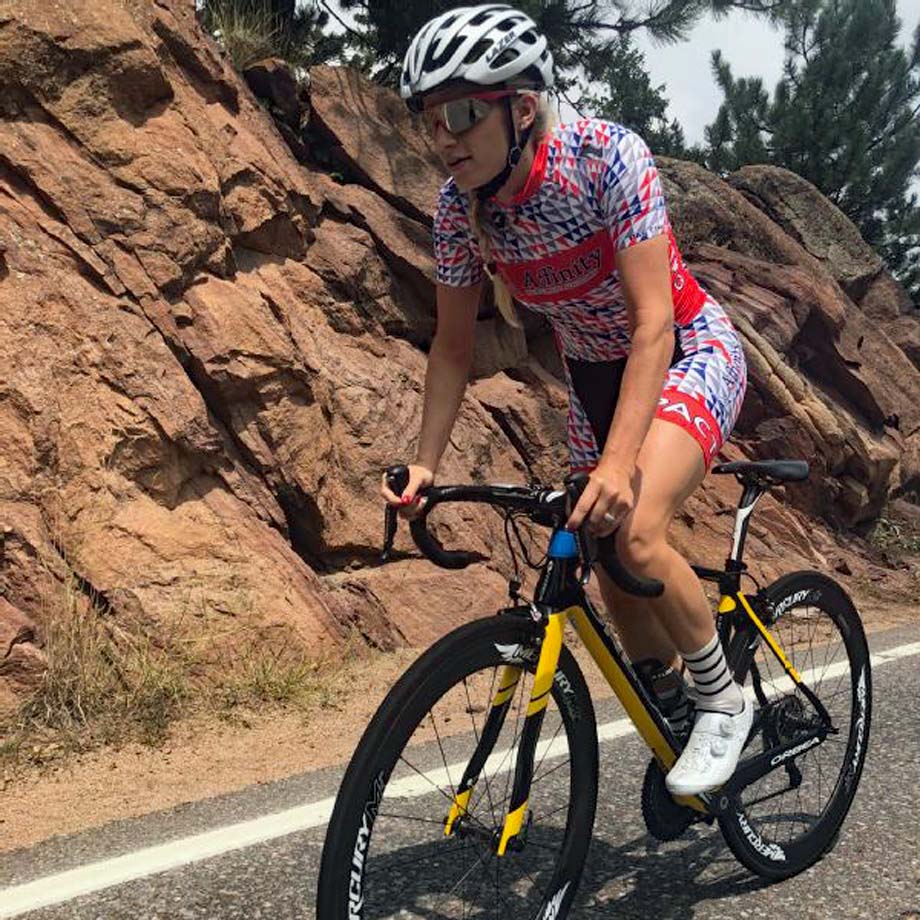 # With thanks to Mike Engleman and Mia for their time and insights. #