Canadian cycling is going from strength to strength at the moment. Riders who have been racing at the Pro Tour level for the past few years are seeing a younger crop of talented riders coming through. One such rider is Ryan Anderson, going into 2011 having signed for the history making Spider Tech Powered by C10 under iconic rider Steve Bauer. Ryan broke into main stream cycling by holding the leaders jersey at the 2010 Tour of California. We catch up with him one damp morning.

PEZ: Firstly Ryan thanks for taking the time to catch up with us. How did you get into cycling?
It all began on a local level on fat tires. I started out racing mountain bikes and things progressed from there. I got onto the National Squad and ended up riding the 2005 World Mountain Bike Championships. As all mountain bikers, I trained on the road and did the Tour de L’Abitibi (UCI ranked junior stage race held in Canada) and it was this that got me interested in road racing. From there I started to look for a team on the road for 2006. After that the rest is history, and on the road. I spent some time in France during 2007 racing for an amateur team for a summer, and then raced the Tour de L’Avenir and the World Championships that year. 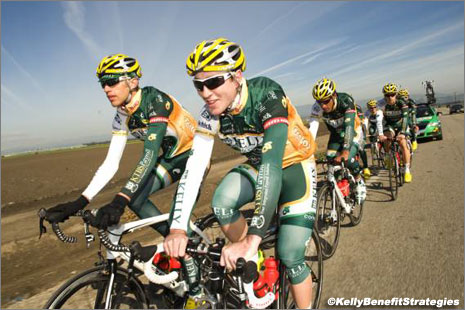 Ryan training with his team of 2010, Kelly Benefit Strategies.

PEZ: 2010 was a year that you broke in the public eye with your ride at the Tour of California (taking the climbers jersey for part of the race). How was the year for you?
Last year was my best year yet for sure for a lot of reasons. California will stand out in my mind for a while as the biggest moment of the year as it is such a big race in the US and is known around the world as all the big names show up.

PEZ: I saw you in Brittany France at a stage start of the Tour De Bretagne in May this year. How was the event for you and how do you find the European style of racing compared to that in North America?
The race itself was great all across the board. The racing style was not all that different from an America NRC stage race; but the size of the roads and the point to point racing, now that’s a different story. You have to be able to adapt to narrow farm roads, cobblestones and all the rest really fast. It was some of the most fun I had on my bike all year. 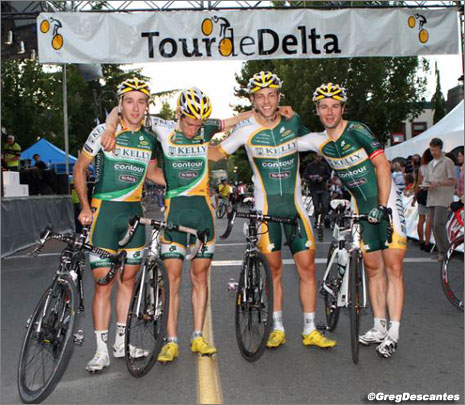 KBS’s crit team was about as powerful as they come.

PEZ: Talk us through those days as you went from another rider in the peloton, to King of the Mountains in the Tour of California?
Well the big thing that sticks out is the first 50k or so until the break got away, on the day we decided to go for the jersey. It was stressful trying to get in it and making sure no one with too many points made it in the move as well. It was amazing trading in my jersey for the KOM jersey for a few days. To be in a jersey in such a large race gave me a lot of attention, but the whole team profited from it and pulled together so we all had a great race. Hopefully in the future I can battle for a jersey like that to the finish!

PEZ: 2011 and a new team, why the change and what made you decide on Spidertech powered by C10?
The change came because Spidertech powered by C10 was going into this year with the plan of going Pro-Continental, which we are all really happy that we recently achieved. I wanted to start racing in Europe more and I feel this is the best place for me. It is very exciting to be on a Canadian team, especially the first one to go Pro-Continental in Canadian cycling history. On a personal note, the first time that I spoke to Steve Bauer on the phone it felt like the right team and I think that 2011 is going to be a great year for all of us. 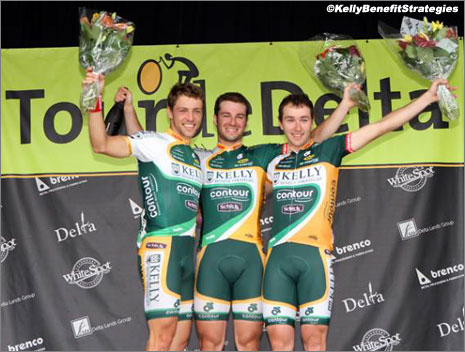 Anderson on the podium in third next to teammates Zach Bell (winner) and David Veilleux.

PEZ: How did the riders cope with the work and preparation to get the team a Professional Continental licence? (Making history by being the first team of that level in Canada)
I was really impressed by all of the hard work that the management put into getting the licence sorted. With the UCI you have to make sure all the paperwork is perfect. As riders we wanted the team to achieve the licence because of the programme which would come with it, but we did not suffer the stress like the management. We were all in Saint Catharine’s for our first team get together when the news came through. It was really emotional to share that as a team, and we had a good dinner that evening to celebrate. We have also received a lot of support from other Canadians in the cycling world. I guess that just shows how much belief people have in our team and also Canadian cycling. I feel proud to be a rider in this vintage time in Canadian cycling.

PEZ: How do you see your role within the team, and what aims do you have for 2011?
This year I just want to be able to help contribute to the team winning as much as possible. I think there is a lot of talent on Spidertech powered by C10 and I can’t wait for the year ahead. We have a team which will be strong at the one day events with riders like Guillaume Bovin and now with Svein Tuft we have a leader for stage races. I want to try and be consistent all year round; I am planning on having a good spring and seeing if I can target a few races in April and May with a good finish to the end of the year. On a personal note I am really happy to be riding with Svein again after racing with him on Symmetrics. 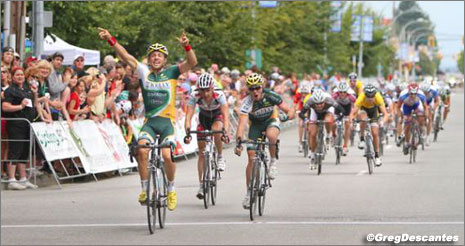 Former teammate and now Europcar rider, David Veilleux, wins the bunch sprint, with a happy Ryan Anderson right behind him.

PEZ: What is the programme looking like for the year?
With the Pro Conti status it means that we are working to get a lot more invites to races in Europe, 1 HC events and large single day races. The aim is to start out with small steps and race at a level we are going to be competitive at. At the moment we will be heading out to Europe in February and getting a service course set up over there. We will stay in Europe for 3 months and then wrap up and head back for some North American races until after the Tour de France. In late summer, the plan is to head back over to Europe to build up for the Pro Tour races in Canada in September as these are a key aim for the team because they are on home soil. 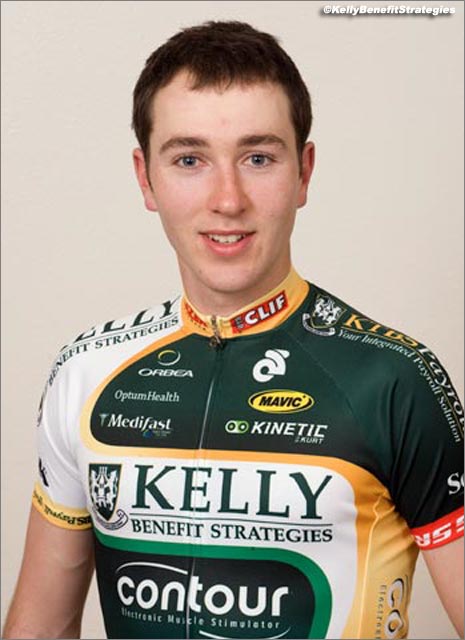 PEZ: How is the preparation going for 2011?
I am happy with my form at the moment as I went to Hawaii for a couple of weeks of training before Christmas and got some good miles in. Being based in Vancouver the weather is never perfect to ride all the time so some quality training in the sun helps a lot. I am currently using all methods to keep my fitness up and my motivation high. For example, yesterday I went skate skiing, but I am also riding on the track here to keep some speed in my legs. I know I am going to have to be ready for the start of the season in the deep end in Europe.

***
We leave Ryan there. He is just starting his day and has to head out into the elements to get those all-important miles in the legs, for what is going to be a crucial season for him. Keep an eye open for him and the rest of his Spidertech powered by C10 team – they are making history for Canadian cycling follow them at CyclesportManagement.com/