Compton, Los Angeles: ‘about 21.5% of families and 23.0% of the population were below the poverty line, including 35.6% of those under age 18’ – that’s what the demographics say. Not the likeliest of places for a top pro athlete to hail from, you might think? But 2008 US criterium champion, Rahsaan Bahati emerged from that very city; and with his new Bahati Foundation pro team will be going back there to spread the message to kids that their life really can be what they want it to be. Here’s what Rahsaan had to say to PEZ, recently.

PEZ: Three seasons with Rock, how were they, Rahsaan?
Rahsaan: For the most part, if I put it all together, it was a great time, with great people. I grew as a person, learned a lot; but it also caused me to step back and looked at my future. 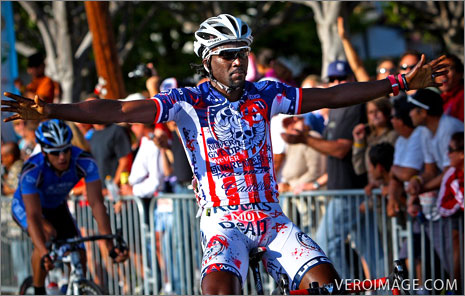 PEZ: Why start a team?
Rahsaan: It’s something I always imagined and dreamed of; with one of the main reasons being that I would be able to dictate what’s best for my career, not what someone else thinks. It’s up to me if I fail; and it’s up to me to get us into the likes of the Tours of California and Missouri, it’s in no one else’s hands but mine.

PEZ: Isn’t it tough to float a pro team in this financial climate?
Rahsaan: When I got out of college in 2005, I went on Monster.com (careers website) looking to get myself a job and put a team together; I raised $500,000, but that’s not enough to run a good team – that’s nickel and dime if you want to fly to races and not drive. To put a good team together, you need a minimum $800,000 – I had to just let go the money that had been pledged to me.

But this time, I knew I could do it, and with the help of Eric Smart and Rick Crawford we’ve put the foundation together and there’s been a lot of donations. We aim to reach out to inner city kids and have an impact on their life; Cannondale bikes and Louis Garneau clothing have been great too. It’s not just about bike racing, though – cycling’s not for everyone, but you might get kids who look at the bikes and think; ‘I’d like to get into design or graphics.’ The bike is the link, but it’s really about inspiring inner city kids. 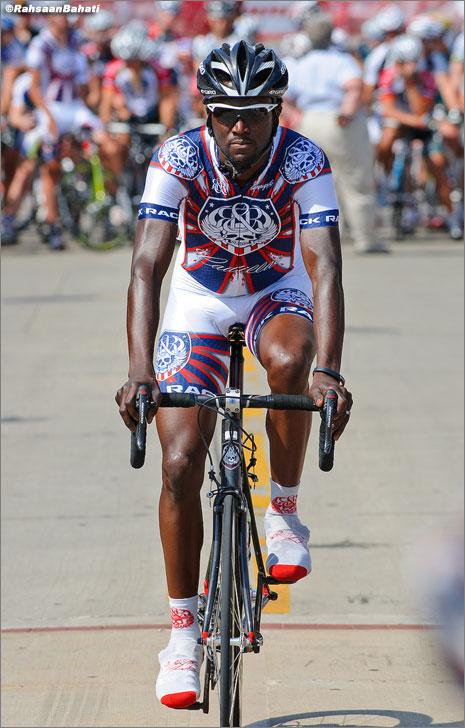 PEZ: Who made the choices of riders and did the recruiting?
Rahsaan: It’s my name, so the responsibility is upon me, but I’ve had a lot of help from Rick Crawford and Steve Owens at Colorado Premier Training; they have a lot of good riders on their books – guys like Tom Danielson. We all put our heads together, it was a collective effort – we’ve got a very competitive group of riders together; guys like Nathan O’Neill, Hilton Clark and Jason Donald.

PEZ: Isn’t it difficult to negotiate bike and clothing deals in a ‘down’ financial environment?
Rahsaan: Steve Owens did a lot of that; but I’ve always had relationship with Cannondale bikes, they’re one of the best bikes I’ve ever ridden and it’s great to get the opportunity to work with them, again. But we’ve got eight people working full time on this thing, so it’s not just me, we have an attorney, a marketing guy, a couple of media guys, an equipment guy…

Although, I’ve been off the bike these last two weeks involved in putting deals together, sitting in board rooms trying to persuade folks to give us their money, when I’d rather be on my bike, training. But I just told myself; ‘this is what I wanted and I have to do it, to put the team together.’ 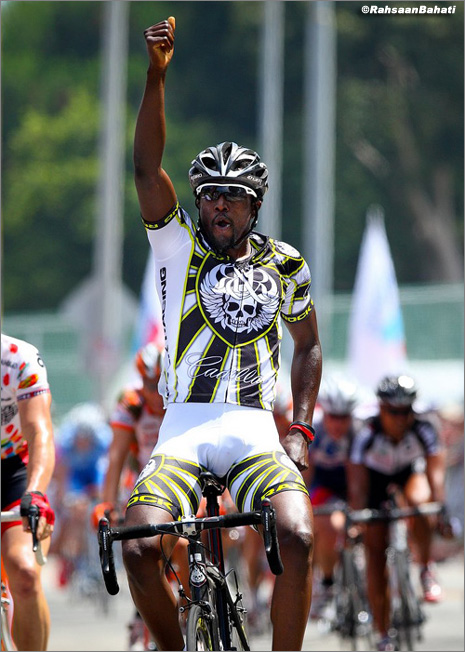 PEZ: What’s the team’s marker for success?
Rahsaan: Winning! With guys like Jason, Nathan and Hilton, that shouldn’t be a problem.

PEZ: And your goals?
Rahsaan: To win stages in multi stage events, rather than just crits. To that end, I’ll be doing a lot more long road miles, six/seven hours – I’ll be riding the national crit champs but it won’t necessarily be a major goal. The Tour of California is a big goal; I want to see if I can squeeze us into that. But there’s the impact on the kids too, not just the racing; I want to have a positive impact on the life of at least 20 kids, this season.

PEZ: When’s the first training camp?
Rahsaan: It’ll be late February or early March, that’s quite late, but the US season doesn’t start until late. 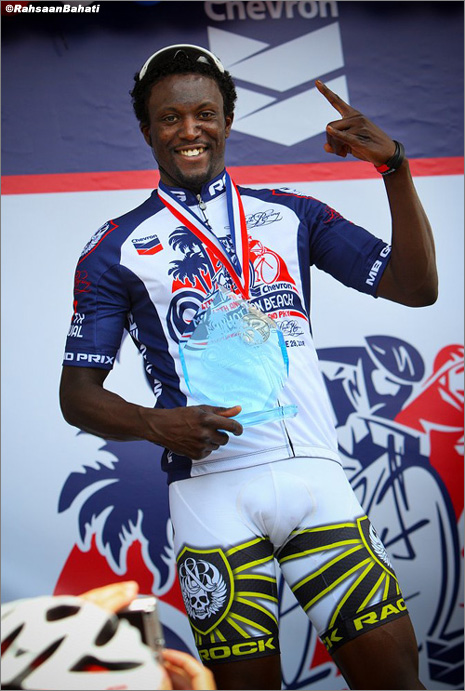 PEZ: Sprinters; born or made?
Rahsaan: Born, definitely! I don’t do any sprint specific training, I work to improve my climbing or to sustain power for longer; God gave me the gift of a sprint, all my training is designed to get me into a position to use it!

PEZ: Nine wins in 2008, five in 2009 – tighter marking, because you were the champion?
Rahsaan: No, I don’t think so, I’m a sprinter, so if people are marking me then they’re behind me – that’s where I want them to be! Last season was a stressful one, Rock suffered pretty badly from the financial down turn and whilst I always got my pay cheque, sometimes it would be late – that puts you under a lot of pressure when you have a mortgage to pay.

PEZ: You rode the Tour of Britain in 2008; did you enjoy it?
Rahsaan: Yeah, I enjoyed myself for the first three stages but I wasn’t physically prepared for the race because all my training was geared towards the US crit champs – a two hour effort; so I had no endurance. I came back very motivated because I know that on the first stage, in London, where I was fifth, I could have won – I was too impatient and went too early. In the States you have guys who can ride fast but don’t have the skills, or maybe it’s the other way around; but there aren’t that many guys who have both – but in Europe, everybody has both! 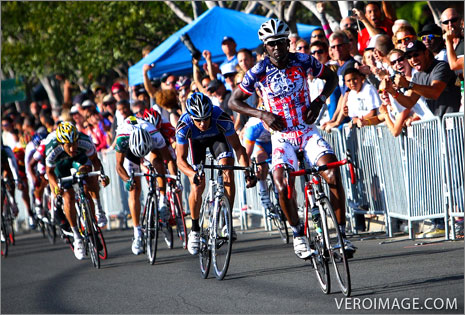 PEZ: Will we see you in Europe in 2010?
Rahsaan: It’s not an immediate goal; we want to build the team in a natural, methodical way. We want to race in the US and get good invites; do a job for our sponsors – on and off the bike.

PEZ: As an African American, has prejudice against you been a problem?
Rahsaan: It’s hit and miss, it happens in places and with people you’d least expect, but then again it doesn’t happen with people and place that you’d think it would. I grew up in Compton, around black people, I didn’t grow up around white people, but being involved with the white people that I have, in cycling, has helped me to deal with it. I’ve had to deal with it in Europe and in the US, but I’ve been smart enough to handle it and not get freaked out by it. 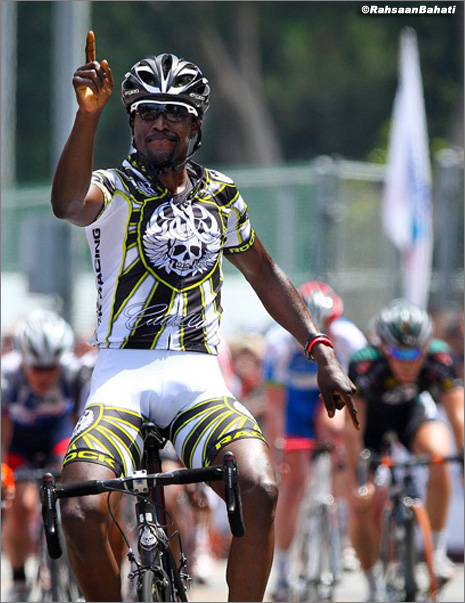 PEZ: And if you could win just one more race?
Rahsaan: Paris – Roubaix; or in the States; Philly!

***
With thanks to Rahsaan for his time; we’re sure we’ll hear a lot more about the Bahati Foundation squad in 2010.

For more on the Bahati Foundation, check out the site: BahatiFoundation.org
Like PEZ? Why not subscribe to our weekly newsletter to receive updates and reminders on what's cool in road cycling?

A Christmas Message From Spain