Here at PEZ, we’re dedicated students of cycling history. Plus, we love those old-school photos featuring riders in wool jerseys on skinny steel bikes with exposed brake cables. So, when pioneering U.S. racer John Howard – who, by the way, turned 63 Aug. 16 –published his new book, “Mastering Cycling,” we just had to give him a call.

After all, Howard has one incredible cycling resume: an Olympian in 1968, 1972 and 1976; winner of the Pan American Games road race in 1971; and a 10-year member of the U.S. National Team. He’s also done some crazy stuff such as setting the bicycle-speed record by riding 152.2 mph on the Bonneville Salt Flats in 1985 and set the world 24-hour cycling distance record of 593 miles 1987. These days, Howard – who at 6-foot-2, 163 pounds, is pretty darn close to his racing weight from the 1970s – lives in California and runs his coaching and bike-fitting business, John Howard Performance Sports. 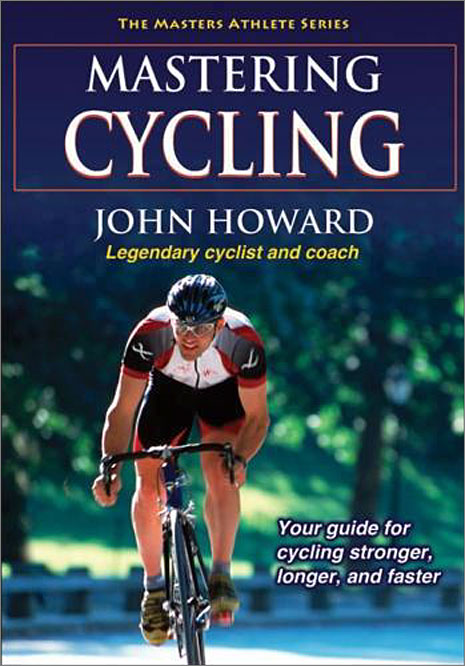 PEZ: What made you decide to write this new book?
I’ve seen this happen many, many times where recreational cyclists will get out there and they get more and more competitive. They want to improve every way they can. They first look at the equipment. We have this sort of ‘you-can-buy-your-ride’ mentality… Of course, there’s a point where that works and then there’s a point where you have to fix the engine, and we are the engine. It’s the bike set-up, which is a topic that’s very close to my heart, and training on and off the bike – basically, building the correct platform. Stretching is something that not many people talk about. There is a real need to increase strength and flexibility at the real base and use that a building block for your fitness pyramid. It’s the marriage of mechanics and biomechanics, that’s kind of the theme of the book. 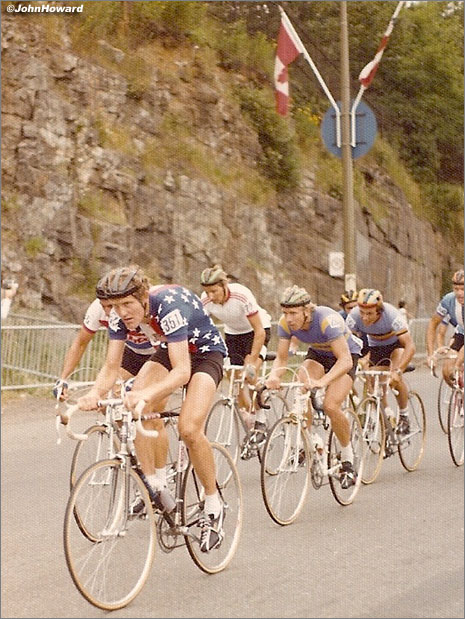 John Howard rides ahead of eventual winner Bernt Johansson of Sweden in the 1976 Olympics in Montreal. Howard said Johansson spent most of the race on his wheel until Howard went down in the rain.  The two had raced together in Sweden the year before.

PEZ: What element do you think is missing the most for cyclists? What’s the biggest struggle?
Probably the time to do it. For so many of us, it’s a battle of priorities. It’s making the stretch to put the time in and being very wise about your training. It comes back to just having that good old work ethic; you have to prioritize your time. To me it has a great deal to do with discipline, being able to put these components together – effective training and all of the manifestations within – into a lifestyle that allows us to go out and play.I look at it as play. I hear a lot of talk about the element of suffering. I think that sends out the wrong message to our mind and our body. Yes, at the professional level cycling is one of the most difficult if not the most difficult sports in the world, but I think there’s a lot more you can do if you have the right mental approach. I try to downplay the suffering. I try to make a game out of it, and the element of play is a big part of that. 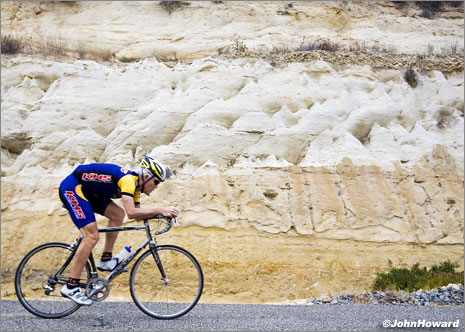 PEZ: You use a term in your book called the “toy syndrome,” or the assumption among many cyclists that we learned how to ride bikes as kids and there’s nothing else to know.
We learn to ride bikes as children, and an awful lot of people as they grow and start pursuing bicycle competition feel like they’ve been doing it long enough, that their skill sets are adequate… I disagree with that. There’s always room for practice. We practice the heart-rate monitor and the power meter, but seldom do we go out and carve cones and practice slaloming on descents. Low speed maneuvering will improve high speed maneuvering.

PEZ: What drew you to more extreme forms of cycling such as the 24-hour record, the 152-mph speed record and the Ironman Triathlon?
There was a point where I just got unceremoniously booted out of (the U.S. National Team). I argued that I was still the best; I don’t think there was any question about that. But I might not have been perceived as a team player, which there’s a point to that. But still, there was a bitter pill there to be swallowed. I was still in my early 30s, but the perception was that that’s too old. Well, we now know that that’s bullshit. I needed to do something in cycling so I put together my own little trilogy of events. It was, what can I do that will generate as much exposure as possible? Ironically, I got more exposure from some of these events than from anything I did in (road) cycling, partly because the sport was in a much more of an infantile level than it is today.

Howard was always up for an extreme challenge, and it doesn’t get much more extreme than 152.2 mph on a bike.

PEZ: What was it like to go 152 mph on a bike?
Terrifying and exhilarating… in the sense that you could die doing this. It was extremely dangerous. You’re anaerobic and you had to make quick decisions at an extremely high rate of speed. … Like riding a pair of bumpy rollers as fast as you can possibly go where your margin of control is limited. I was turning about 120 revolutions per minute at 152 mph. 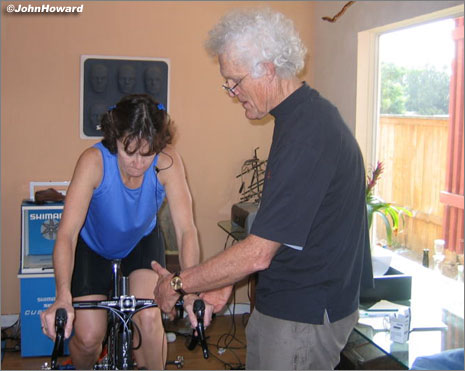 PEZ: Had you been a little younger, you would have been in the era of Jonathan Boyer (who in 1981 was the first American to ride the Tour de France) and Greg LeMond (who in 1986 was the first American to win it). Is there a part of you that wishes you could have raced in the Tour de France?
I had many opportunities that I just let pass because I didn’t have support financial or otherwise. Back when we were racing on the Raleigh team, back in the early 1970s, the first team sponsored by a company, we went to Europe… Raleigh sent us over there to Nottingham (England) to get equipment. We rode the Milk Race, twice. At that time I had an opportunity to ride for TI -Raleigh, the pro team that was the top team of the era. … It would have been a domestique role, I knew that. But I just didn’t really have the desire. It would have been in my prime, 1975-76. At that time, the Dutch riders didn’t speak much English. I turned it down. I went back to school and then raced locally. In retrospect, it was a mistake. I should have done it. I would have been the first Tour de France rider from America. But you can’t look back.

PEZ: Is there a pro rider you admire or think you had a similar racing style to?
I admire Levi Leipheimer, even though we’re the complete antithesis in terms of body size. He has his limits. He just reminds me a lot of how I used to feel, some of the interviews he’s done. He’s fallible, but he’s a great rider. That’s the person I look at and say, ‘Yeah, I can certainly relate to everything he’s saying.’ 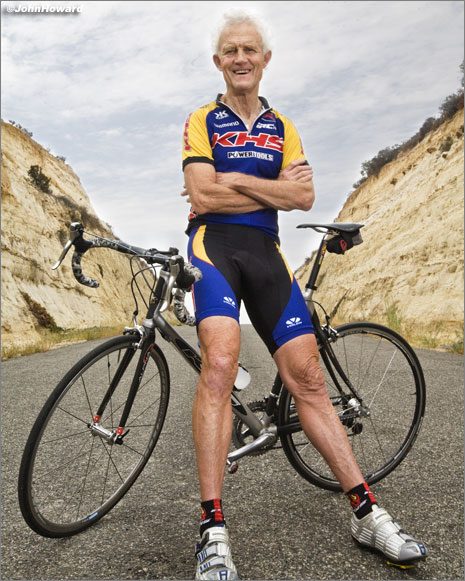 John Howard has stayed fit and trim from a lifetime of cycling.

PEZ: Doping scandals are an unfortunate part of our sport today. Back in the 1970s, did you see much of that?
We were never tempted because it was never offered to us. We didn’t have the soigneurs. We didn’t have the team doctors. We were just green amateurs racing against professionals. We were good. We had our day. I look at it today, and I’m just so glad we were never in a position to be corrupted. I watched some of these guys climbing in the (1974) world championships in Montreal — these are guys I’ve ridden stage races with, the Tour of Britain, the Tour of Ireland. I wondered, how are they climbing Mount Royal in their big chain ring? I can’t do that. I can’t get that kind of power. Maybe the justification for that is I’m still enjoying my bike and some of them are gone. So, I think the payback, if there is one, was longevity. To me, that’s what cycling was all about, always has been. It’s the fresh air and the blue sky and the fact I’m going to be doing this for the rest of my life.