Trinidad and Tobago’s Emile Abraham has been on the international pro scene for a long time; 2013 will be his 12th season. But he’s still grabbing those podium places on the super-fast US criterium scene, not to mention racking up stage wins year after year in his home race, the Tour of Tobago.

It was back in 2001 when he won a stage in the Ronde van Vlaams Brabant – and that’s a long way from the southern Caribbean. For 2002 he signed with US team Saturn, winning the Tour of Tobago. A year later he was a team mate of Hamish Haynes in British team GS Maestro, repeating his win in the Tour of Tobago. Monex was the team for 2004 with a clutch of US wins and podiums including one in Greenwood, where he beat rapid, multi-winning Italian Roberto Gaggioli. Still with Monex, 2005 saw wins in the criterium stage of the Joe Martin stage race, the Atlanta criterium and the 100 kilometre Georgia Classic. The US podiums continued in 2006 with AEG, as they did in 2007 with Priority Health – including another win in the Georgia 100 kilometre Classic and an excellent silver medal in the Pan Am Games road race.

For 2008 the name on the jersey was Team Type 1 and there were US podiums, not to mention a strong Herald Sun Tour in Australia. For 2009 he became rider, manager, director of the Aerocat Cycling Team where he would stay for three seasons. That year he took two stages in the Tour of Grandview and the following year second in the Central American and Caribbean Games road race with 2011 seeing him win one of many T & T National Road Championships – with all three years rich in US and Caribbean podium placing. For 2012 the team became the Rosetti Devo cycling team; there was the customary stage win in Tobago plus podiums in big league North American criteriums in Dothan, Athens, Sandy Springs, Harlem, Grandview and Quebec. 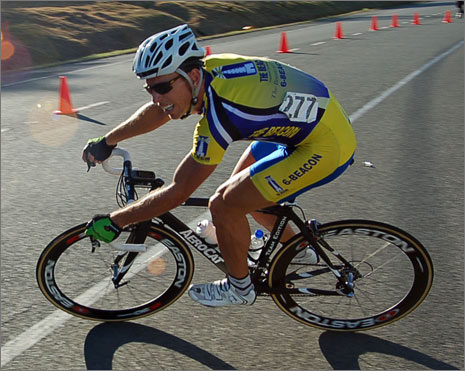 PEZ: How many seasons have you raced, now and how do you maintain your enthusiasm?

Season 2013 will be my 28th year of racing with, 1984 being my first year racing in the BMX category. My enthusiasm comes from my passion for the sport and my desire to still be a top cyclist. 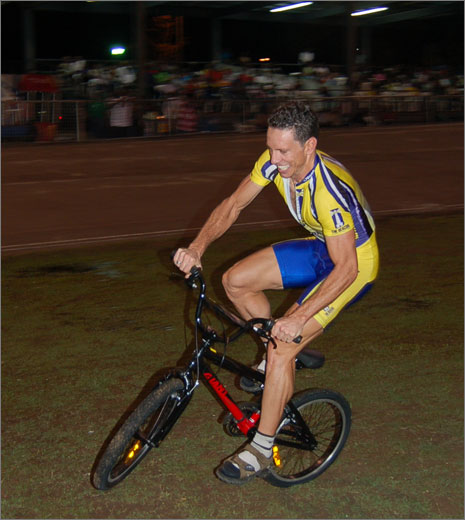 I am still able to be high in crits at 38yrs because I have many years of racing under my belt and my experience has taught me to read races; hence there are many times I am able to predict what may occur in the race – and I also know how to position the team and myself during the race.

PEZ: What changes do you notice about yourself from being, say 28 – do you train differently, now?

Yes I certainly train differently to when I was 28 years-old as my metabolism and recovery have slowed down so I take more time off in the off season. I train fewer hours for my base training as my muscle memory is maintained as long as I don’t take an extended period of time off the bike (six months to a year) – and during the season I do more recovery rides than workouts as racing takes a lot out of me.

PEZ: Do you set yourself season goals or just ‘go with the flow’?

I do not usually set goals unless I have a major competition in that year (Pan-Am Games, Commonwealth games etc). In 2013 there are no games just championships so I will mainly focus on the USA criterium circuit and NCC races. 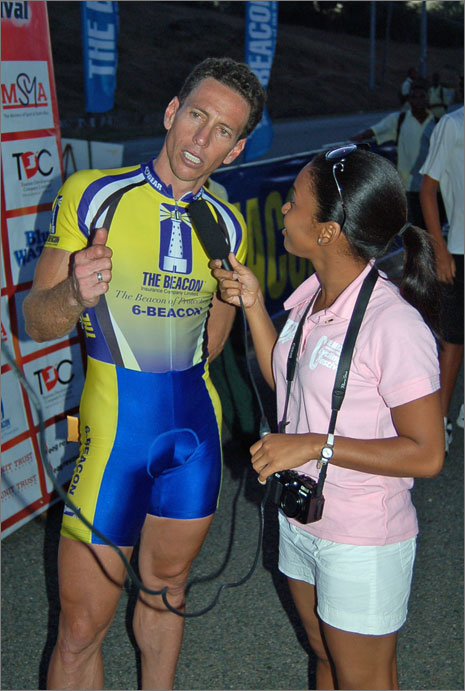 PEZ: Is your training still ‘old school’ or do you use SRM/Power Tap?

I am still old school and do not use any HR monitors or power systems.

PEZ: What tips do you have for readers on how to be a ‘crit king’?

To be a crit king I think they must first learn how to position themselves; especially during the final laps of a race as this is the key of a successful crit rider. 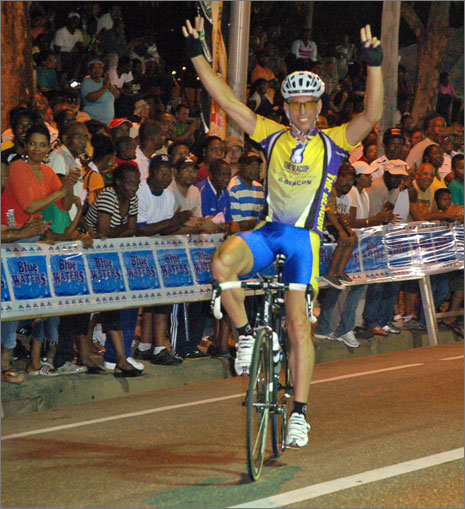 PEZ: You’re rider/DS/manager; life must be hectic – and you’re time management must be good?

Yes I do have to manage my time well but I always try to have my logistics and everything else planned out well in advance so it does not build up.

PEZ: And you must be a good salesman always to have a sponsor?

I do not consider myself a good salesman, I more think of myself as being blessed and pray that things work out for me each time – and thankfully they do! I have also been in the sport long enough to have built many friendships and partnerships within the cycling fraternity that allows for continued growth and success. So with this year’s team I feel very fortunate to have connected with the guys at Predator Cycling. 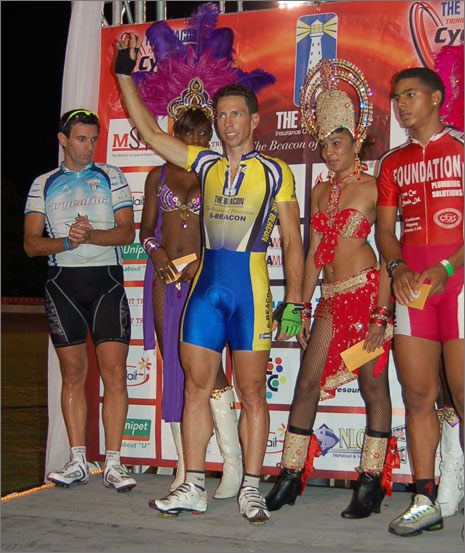 PEZ: Predator custom build new carbon frames – so why race on repaired ones?

Yes I really like their bar/stem combo and I think it will play an important part of our success in 2013. 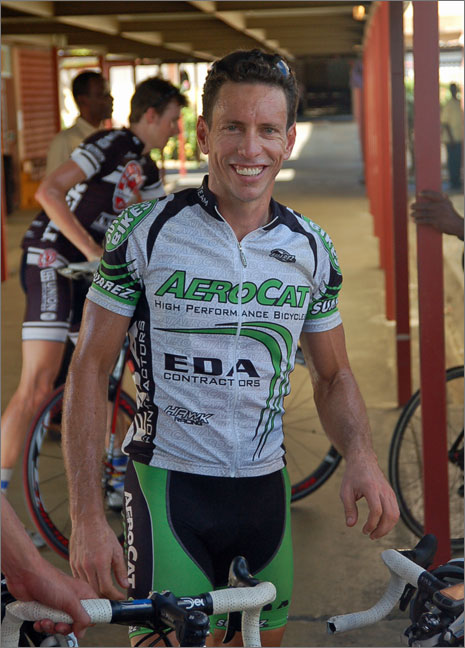 PEZ: Four Continental teams lost in the US – what do you put that down to?

Apart from worldwide economical problems, the enhanced bad publicity on prohibited substance abuse within the sport has deterred many sponsors from wanting to brand their name with many sports – including cycling.

PEZ: Has the Lance scandal been a factor – and has that affected the public’s enthusiasm for the sport?

Yes, I think the Lance scandal has been a factor where sponsors are concerned but the public’s enthusiasm is still there as the sport of cycling is still and exciting and non predictive sport. 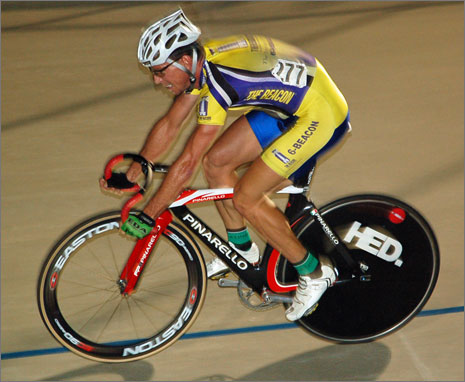 PEZ: How many Trinidad & Tobago titles have you won, now – it was 24, with nine road titles, the last time I spoke to you?

Currently I have 25 national titles and 10 road championships. September 2012 I did not defend my national road title as I became very ill with two infections: Dengue fever and Leptospirosis. This left me fighting for my life rather than the championship and was also the cause of my inability to attend the Tobago Classic, Caribbean Championships and the USA crit finals in Denver, Colorado – thus my season was abruptly cut short for 2012.

PEZ: Has there been a positive ‘Phillip Factor’ in Trinidad with Njisane Phillip’s fourth place in the sprint in London?

Yes Njisane has been a huge positive factor within the country inclusive of T&T cycling fraternity; we’re all very proud of his accomplishments. 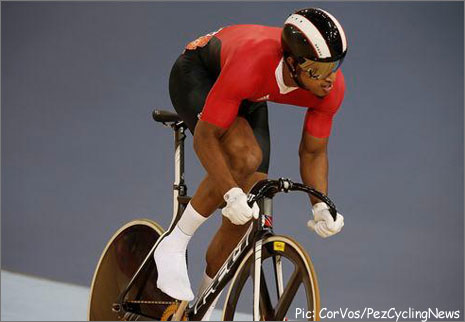 Njisane Phillip on his way to 4th place at the London Olympics.

PEZ: When you look back on your career, anything you’d do differently?

Probably not, I would do it all over again. However, a good piece of advice for any upcoming cyclist regardless of their origin is to gain continued international exposure at an early age and work on making and maintaining relationships that will allow for continued growth and success on and off the bike.

PEZ: What are you looking forward to most about the new season?

For the 2013 season I am eager to work with Predator Cycling and the great squad. Our roster will be one of the strongest I have been privileged to manage thus far in my career.