Rider Interview: The Aqua Blue team might not be as big as BMC and the defunct IAM Cycling teams, but Larry Warbasse has kept the Irish ProConti team in the spotlight with wins in the Tour de Suisse and the US National championships. When the team lines up for the Vuelta a España in August, Warbasse must a certainty for a place in the Spanish Grand Tour. Ed Hood caught up with man from Michigan just after his ‘Stars and Stripes’ win. 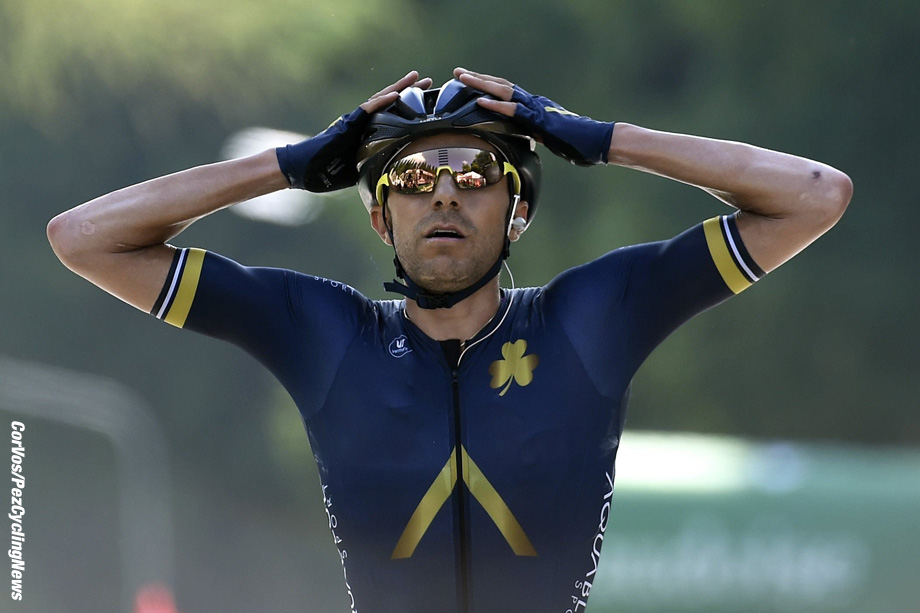 It’s a little while since I last spoke to 27 year-old Michigan resident Larry Warbasse, he’d just moved up to BMC for season 2013 having successfully ridden as a stagiaire with them at the end of 2012. He’d stay with the US ‘super team’ for two seasons before moving to Swiss squad IAM for seasons ‘15/’16. During that time results were ‘solid’ and when IAM folded at the end of last season he joined fledgling Pro Continental Irish team, Aqua Blue.

On the back of some strong early season results Warbasse has gone from being ‘solid’ to a World Tour race stage winner in the Tour de Suisse and a Champion in the recent US Nationals in Knoxville, Tennessee. High times we had a word with the man. 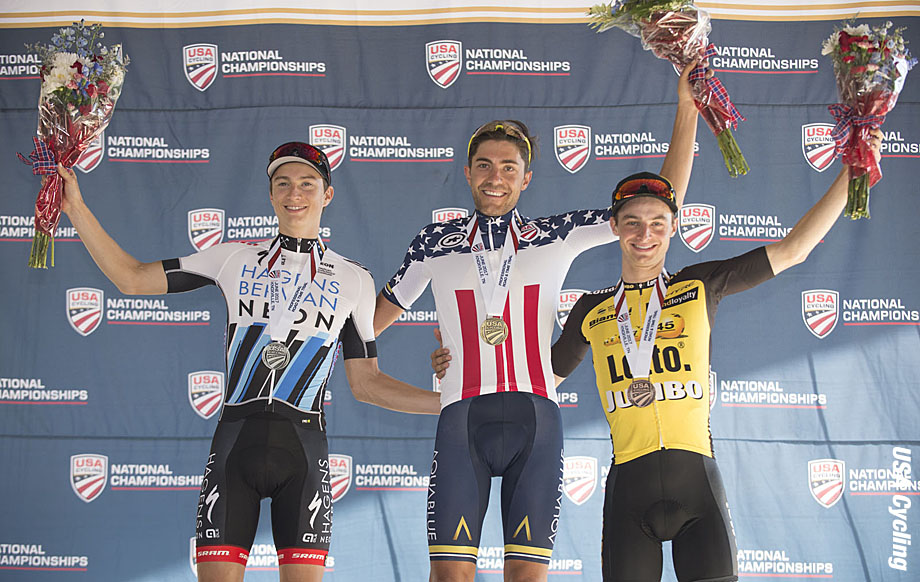 PEZ: Congratulations on two great rides, Larry – why such great form now?
Larry Warbasse: It’s the culmination of form that’s been building all year, it clicked for me in Switzerland and I carried that form through to The Nationals.

PEZ: Tell us about the Suisse win.
I had high expectations going in to the race; I’d been training at altitude and knew I was going well.
But on the first day at the bottom of the last climb of the day a guy crashed right in front of me at 40/50 kph and my GC was over – it was too late in the day and they were going too hard.
I had to recalibrate and go for a stage win. 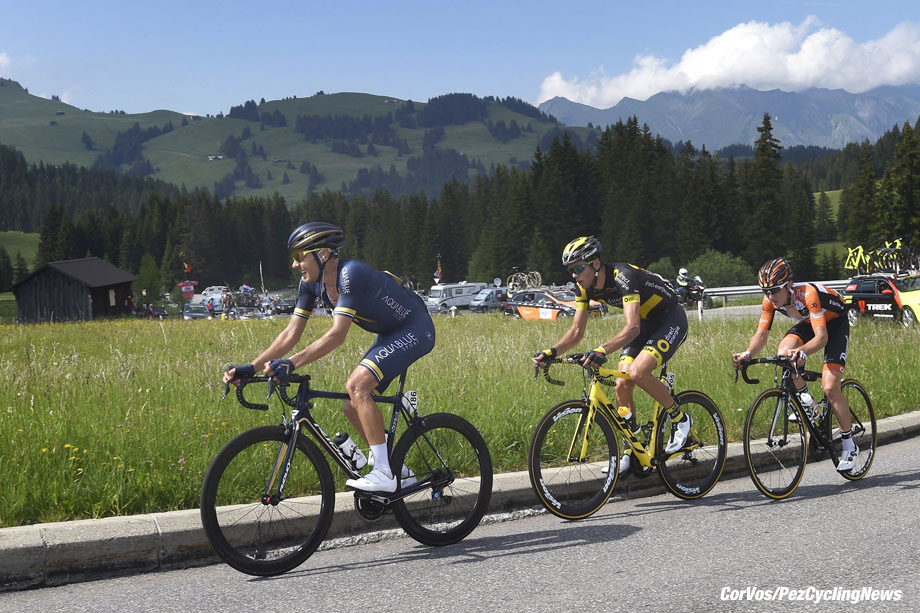 PEZ: When did you realize you had the stage victory?
Stage Four when I got in that break I knew I had a good chance; I thought that if they gave us a long enough leash then we could stay away and I could win. The guys I was with were good strong guys but I knew I was a better climber. I figured I needed five minutes in hand at the bottom of the last climb to hang on and win, we actually had four minutes but I only lost 2:40 of that to the chasers at the line. 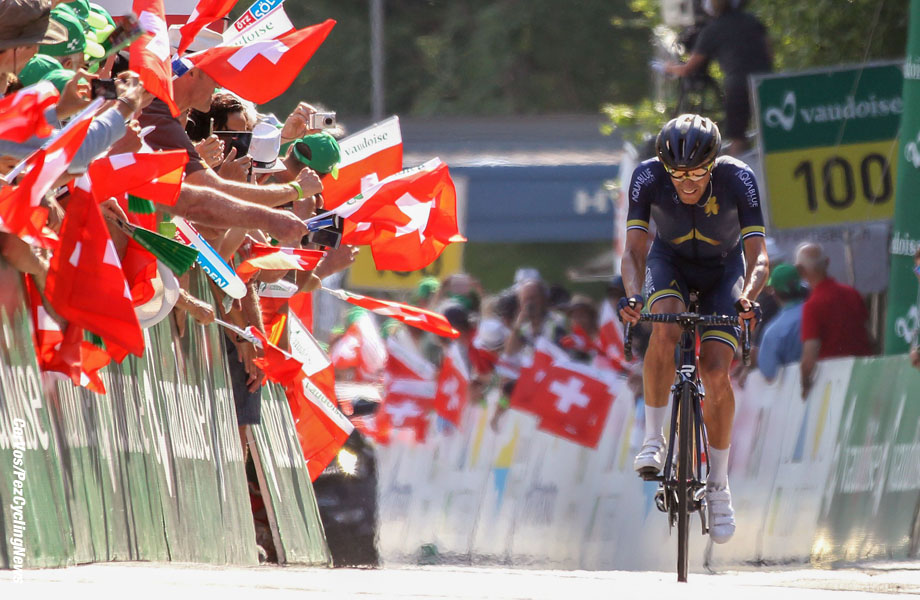 PEZ: How do you choose your stages to make the move on?
I look at the road book for the race and the profile for the day lays a big part. That day, Matthews had the jersey but it was mountainous so I knew it would be unlikely his team would try to control it so there could be a lack of cohesion behind.

PEZ: What were your expectations going in to the Nationals?
I was actually focussed on the time trial and not too concerned about the road race – in the TT you can control the variables, the road race can end up a crap shoot. But I didn’t have a good day in the TT, ending up fifth which was a disappointment to me so I thought to myself; “OK ! I have to do something in the road race!” I knew it would be a crap shoot but I also knew I had good form. 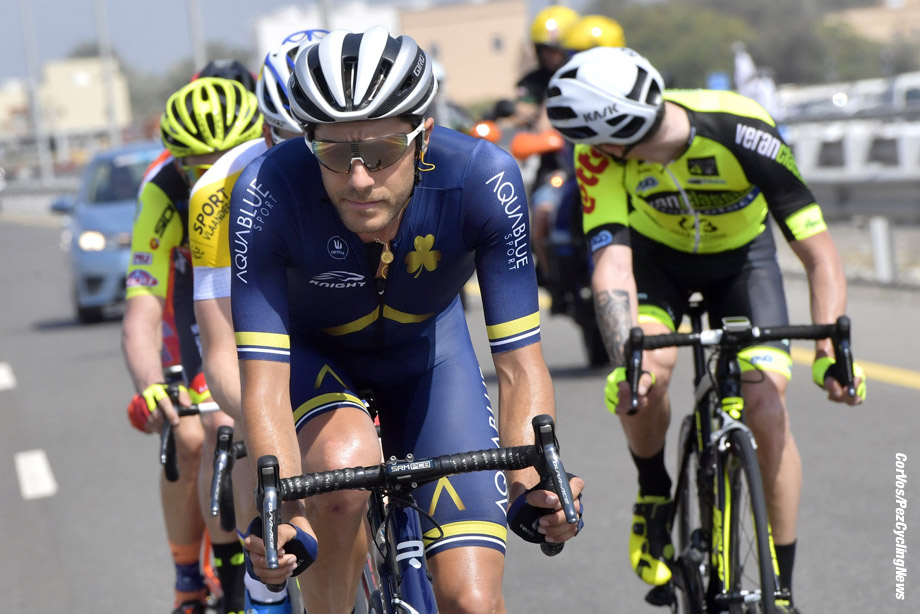 PEZ: Talk us through it.
I felt bad to start with and it didn’t help that I was on my own and some teams were starting with 10 guys. After three or four laps of the 14 a few guys went away but the Hincapie team controlled it – which was nice. But I was thinking; “if this comes down to a sprint I have no chance,” so I spoke to a few of the World Tour guys and suggested we make it hard, cause a little chaos – but then the Rally Cycling team went to the front and made it hard which was perfect because I didn’t have to do anything.
The next few laps were hard and with two laps to go seven of the strongest guys went away on the climb – I rolled of the front of them a little and had a little gap then Alex Vermeulen and Neilsen Powless came up to me and we all began to ride really hard with the gap going out to 20/30/40 seconds. I had a little dig at 1500 meters to go but decided to wait – but go first in the sprint, it was a downhill and I figured I could launch first and hold them off – and that’s how it worked out.

PEZ: These wins must be a massive boost after the disappointment of IAM folding?
That was a big disappointment, yes – but at least they let us know what was happening in plenty of time but it’s never pretty when a team folds, very sad. 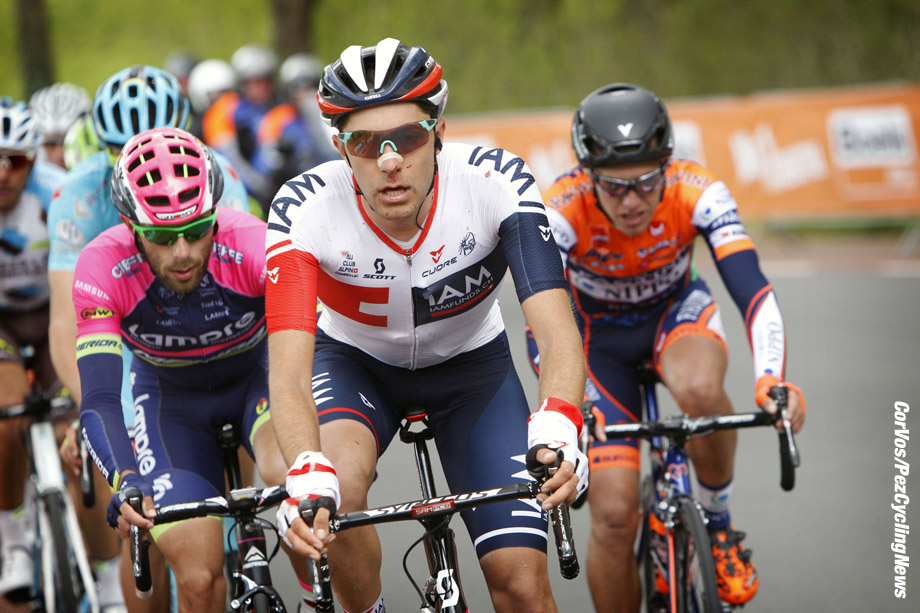 PEZ: How did you get the Aqua Blue ride?
I’d heard rumors about this team which was starting up and when I was out riding with Calvin Watson he mentioned this guy, ‘Rok’ – Leigh Bryan – who was recruiting for them as performance director. I got in touch, he came to Nice to meet me, we spoke for two-and-a-half hours and from there it all happened pretty quickly.

PEZ: US then Swiss and now Irish what are the different ‘vibes’ like across the nationalities of the teams?
BMC was US but really international and IAM was the same with a real mix of nationalities. Aqua Blue is the most Anglo team I’ve been on and it’s a pretty relaxed atmosphere but at the same time focussed on the job. 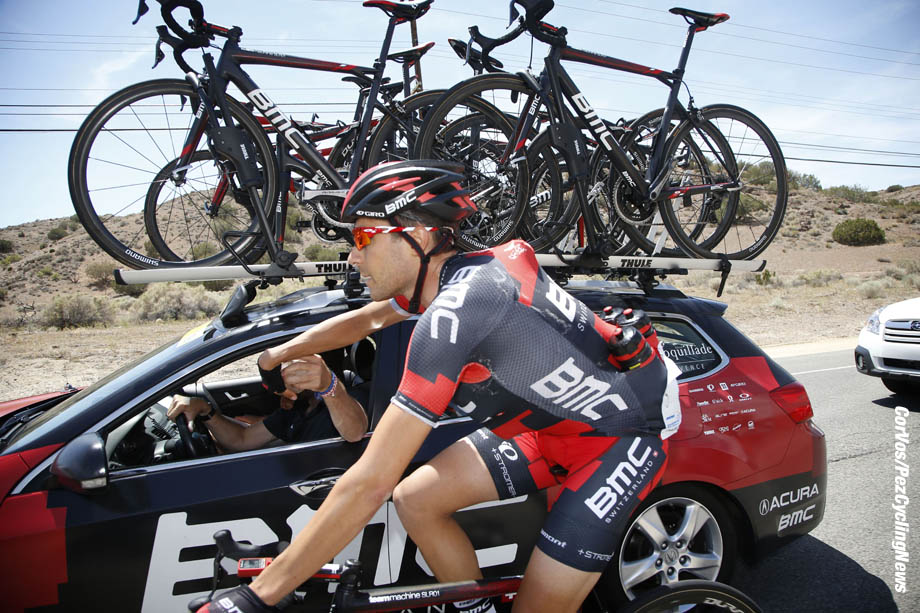 PEZ: The team is in the Vuelta, your place must be booked?
I hope so! I’ve ridden it the last three years and I love it. It’s an awesome experience and I love Spain – and the thing about a Grand Tour is that you have 21 chances for success, not just one.

PEZ: You started the Giro last year but were DNF?
That was pretty disappointing; on the first rest day I had tight muscles so I did some stretching but my hip was still tight and I had pain. When I stood up I couldn’t feel the lower half of my leg – I hoped that it would just ‘go away’ but I’d pinched a nerve; the lower half of my left leg was numb for three days. It’s hard enough in the Giro with two legs, never mind one-and-a-half and then I started to mess my back up because of the way I was pedaling so I had to quit. I took a week off the bike and it was fine. 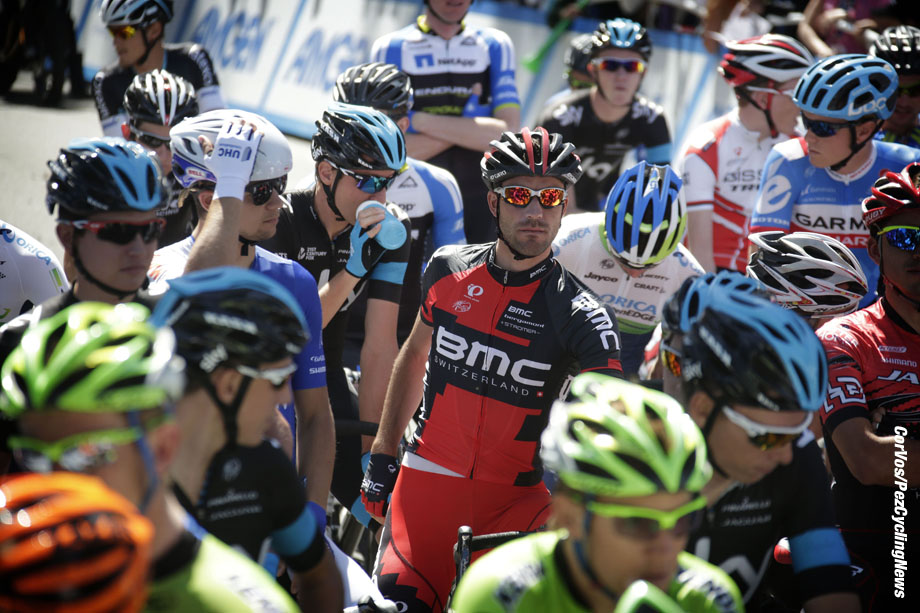 PEZ: You started early this year with Cadel’s race in Australia, do you think that helped get you this form?
Cadel’s race was cool, I’d never been to Australia before, I didn’t know my race schedule at that stage of the season so decided to make the most of it – we rode the Sun Tour too, which was pretty cool. 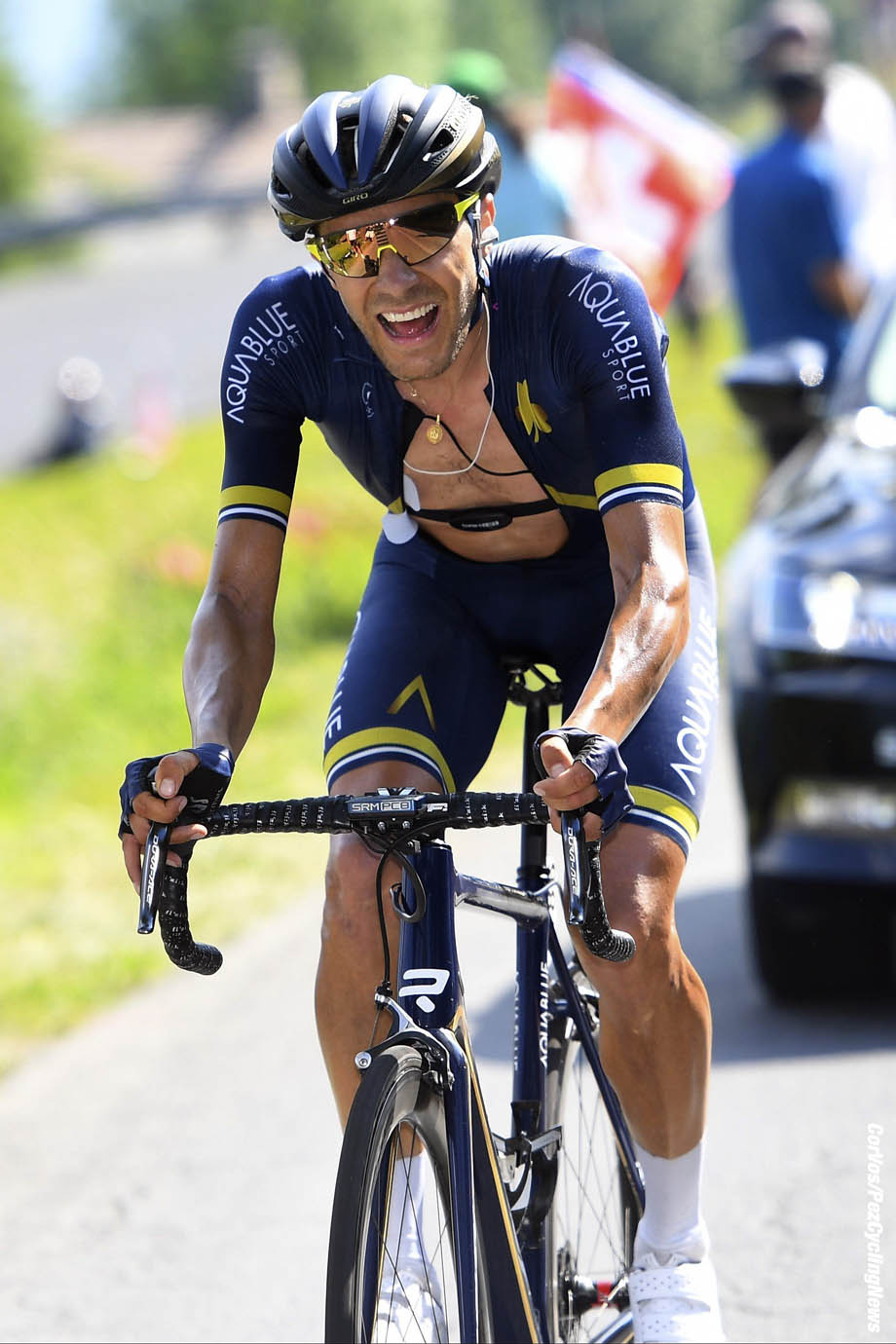 PEZ: You came back to some strong results in Europe, top 20 in le Sarthe and Yorkshire then top 10 in Norway.
Actually, at le Sarthe I probably had my best form but I wasn’t the smartest tactically; in Yorkshire I was strong but lacking a little. Norway was a surprise, I came straight from altitude training and it was great to go top ten there.

PEZ: What now?
LW: A week off here in Michigan then back to Europe to train for Burgos – and the Vuelta. 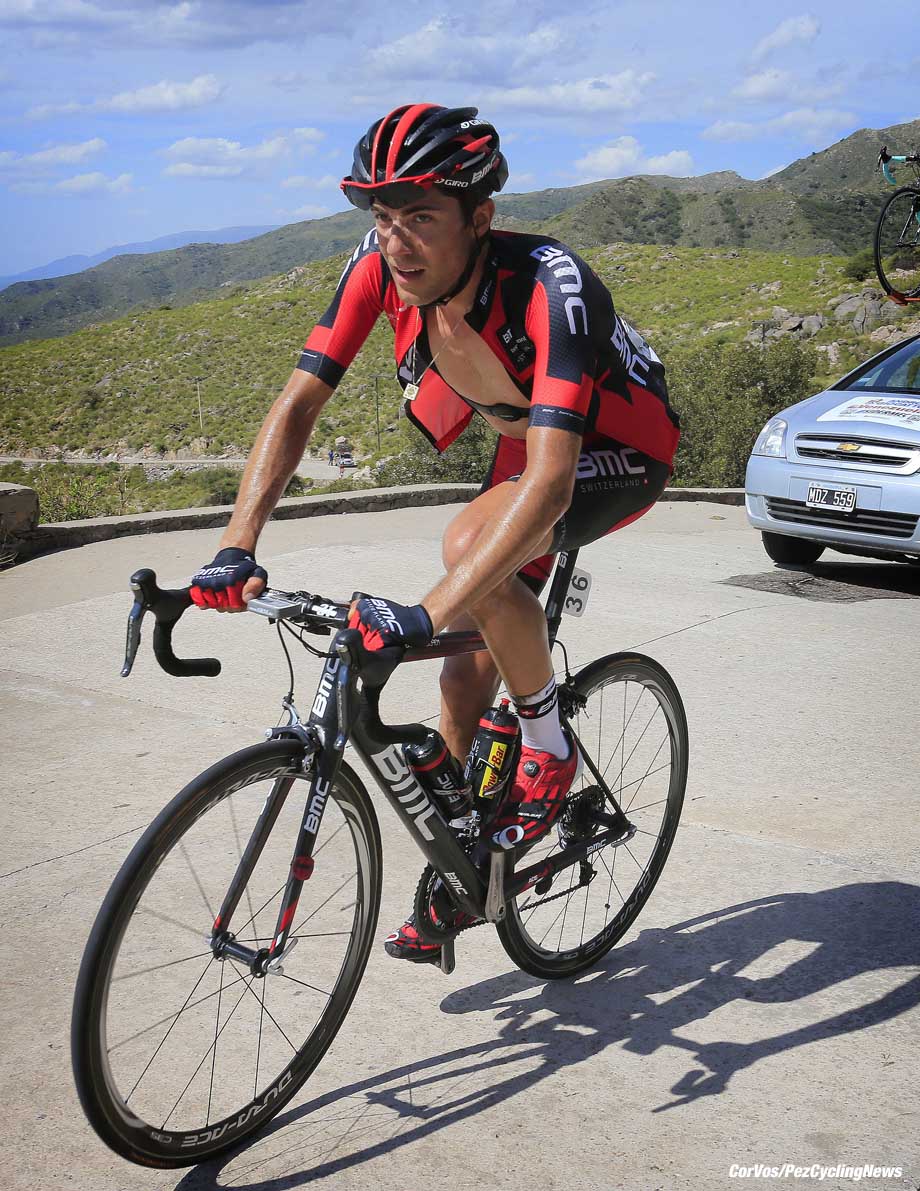 Cycling at 360° For RPM Cycling