Rider Interview: Three time US Cyclocross champion Stephen Hyde is about to start his 2019 campaign in the mud of Europe – the hot-bed of the sport. Ed Hood caught up with the man in the ‘Stars and Stripes’ while he was on a Spanish training camp with his eye on the World championships in Bogense, Denmark. 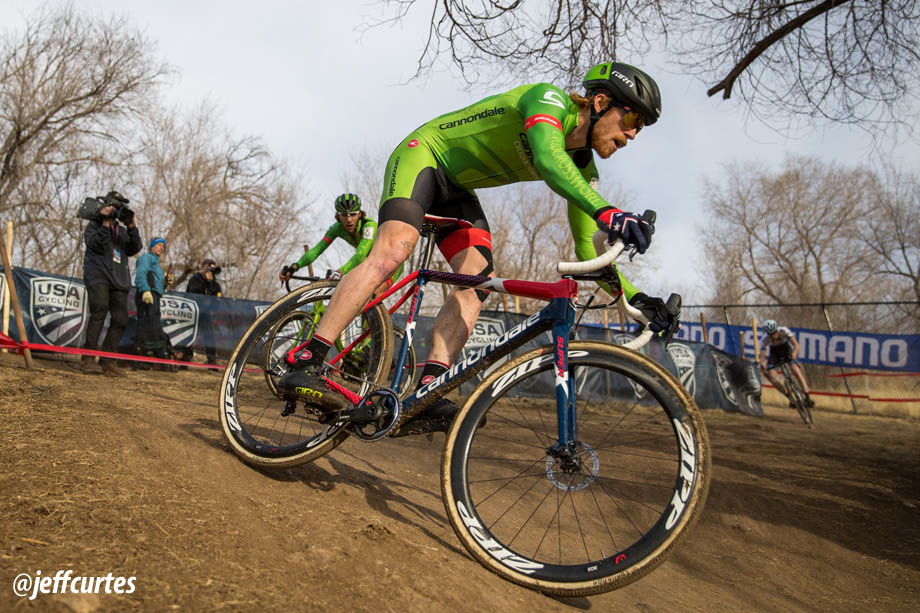 Despite a late spill, Stephen Hyde (Cannondale-Cyclocrossworld.com) made it a hat trick of US Elite Cyclo-Cross Championships ahead of team mate Curtis White in the cold, thick gloop of Louisville Kentucky – despite breaking his sternum back in September.

Here’s what he had to say to PEZ just before kicked off his Euro campaign:

PEZ: Congratulations, Stephen – that late spill, what happened – your heart must have missed a beat or two?
Stephen Hyde: Well, that ride was filled with a lot of “Oh shit” moments! The last spill certainly took some concentration to come back from but I was already in outright survival mode anyways. You just don’t have time to be frustrated at that moment, you gotta move on quickly and keep on pace. 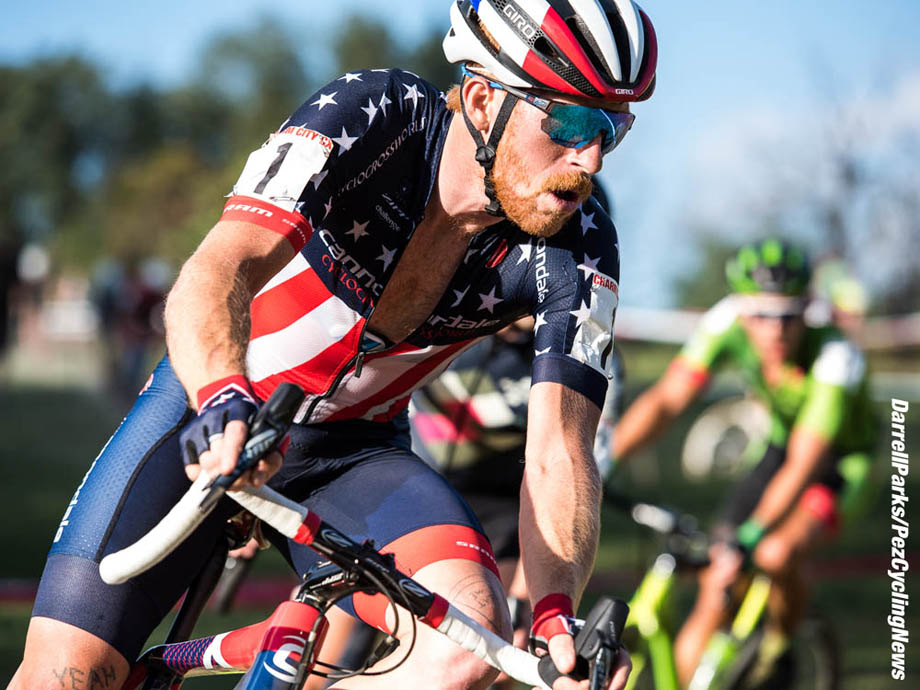 PEZ: That course looked about as muddy as it can get – is it the worst you’ve ridden in?
I would have to say, yes. I’ve ridden in a lot of muddy races but this one took the cake. That mud was mostly made of a thick clay that just stuck to everything it touched. Which made your feet heavier, your bike heavier and your drive train clog quickly. Add to that the addition of some grassy track on the lower portion that started to wreak havoc on or cogs. Add to the weather the fact that you have literally hundreds upon hundreds of riders racing all week on the course and you aren’t left with any usable track. It’s interesting, I have heard a lot of talk about how it’s good that the elite riders are faced with having too ridable lines to get ready for Europe and yadayada, those people have never raced in Europe, have no idea what makes those courses hard and are wholesale wrong about what constitutes “development” for our needs. There’s a longer thread here but wide courses and no lines are the antithesis of what a professional cross races looks like. I’ll leave it at that. End rant.

PEZ: Your win owes a lot to your ability to ride deeper into the big climb than anyone else – was that your tactic before the race?
On the contrary, I think my ability to know my limits and not push too deep into the long climb was my best asset. Any time that you have to push yourself into territory that you know is potentially a one shot deal and it isn’t on the last lap then it’s a recipe for a massive explosion.

PEZ: It looked like you and Curtis were in a different race.
Some races play out in a head to head tactical battle and some seem like it but are really man vs. course. That was certainly the latter. You have to know yourself and your opponent and know when to play those cards. That Sunday was a battle to see who made the least mistakes and could stay on pace the best.

PEZ: When you got the gap, was that an acceleration or did Curtis crack?
Totally just how it worked out. At no point in that race did I make any attacks or accelerations that would make an impact on Curtis’s race. I played a cool hand and only laid my cards on the table when he let down his poker-face. I like the kid a lot. He has grown so much as a person and an athlete since I’ve known him. I am happy to play any part of that growth for him. Some days it’s helping him with nutrition or coaching advice or race tactics. Some days the best thing I can do for him is to beat him. He will learn from everything I do and one day outsmart and out ride me. Until then, I get great pleasure raising the tide that lifts all boats. 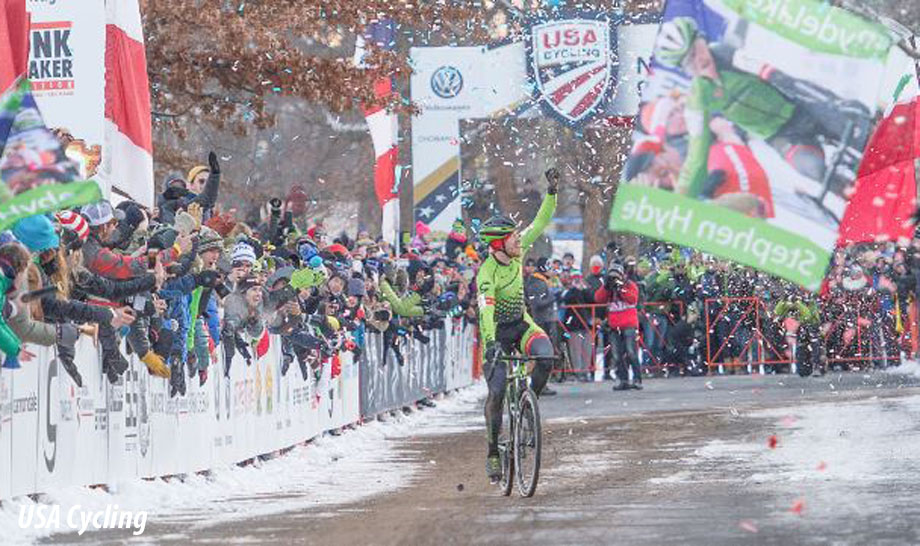 PEZ: You were on 1×11; is it a better set up than double rings for you?
I have been on CX-1 for my whole CXWORLD.com career. It’s really what I like to use and is super good for our CX application.

PEZ: What rubber were you on and what pressure?
We ride Vittoria tires now, which has been a great addition to our already impressive line-up of top end equipment. They offer three distinct tread designs, dry, mixed and wet. Curtis and I both went for the wet treads. My pressure was 16-17psi front to rear. 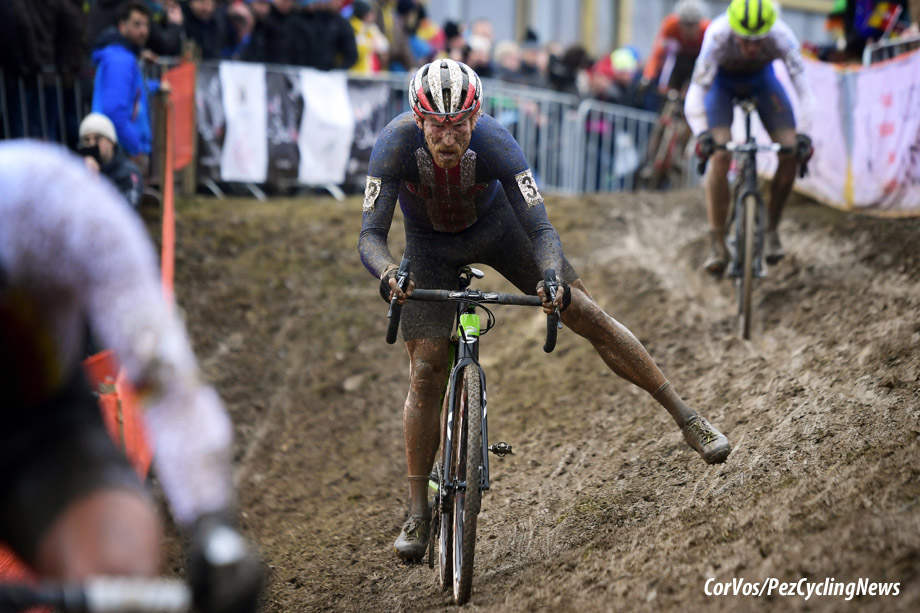 PEZ: Tell us about your broken bone and rehab. to recover from it?
Back in Sept I crashed and fell on my back from pretty high up fracturing my sternum. If you do the math on that, it doesn’t sound right but that’s what happened. Most sternum breaks come from direct impacts from a car crash or football etc…

It was bad, I couldn’t sit up, couldn’t lay down, couldn’t laugh, breath, cough… And it took a few weeks before I was comfortable going outside on my bike at all, although cabin fever pushed me out the door faster than anticipated. Still it took six weeks before I competed again and even then I was timid and behind the curve as everyone else was in full race season swing. I made it back to the podium just in time to crash again and injure my foot and break a rib as well as a slight concussion at Pan Ams. Then some more down time for me. But I fought through it and made the best of my time. 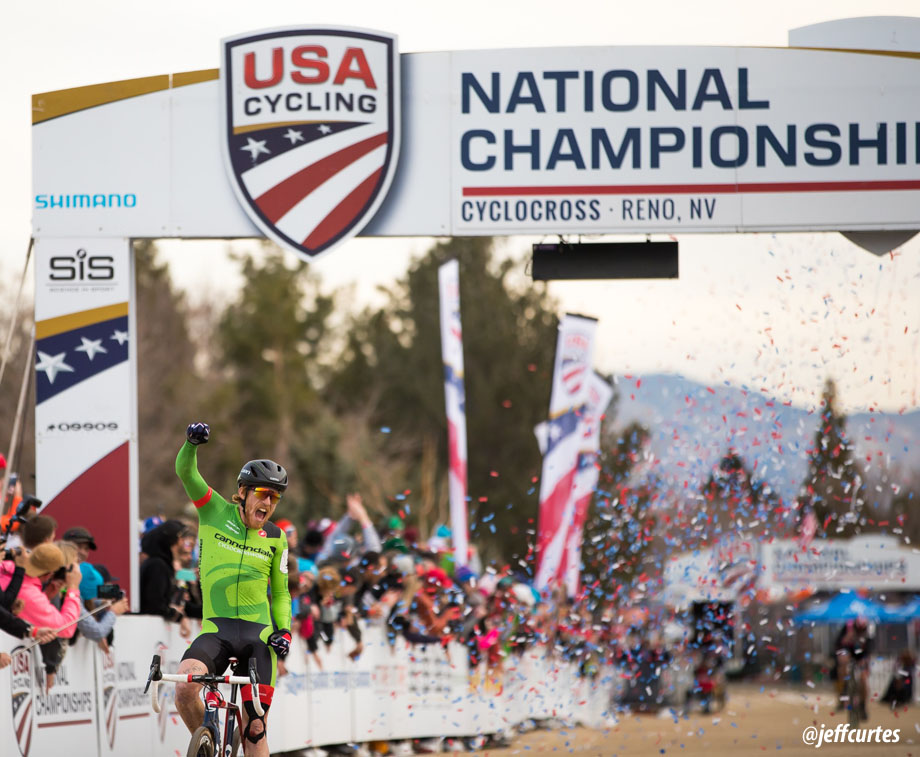 PEZ: Your second defence; is it true what they say that it’s harder to defend than win for the first time?
You know, if you let the pressure get to you and you look at it as if it’s a “once in a lifetime event” then it’s absolutely insane how much pressure you put on yourself and how hard it is to then defend what you think is yours to begin with. I went into this race knowing that I have to earn it every year and that things change and races are unpredictable. I knew I needed to go in with the same focus and ferocity that I do to win ANY race that I enter.

PEZ: How do you prepare for your ‘cross season and what do you do in the summer?
The last two years have been a departure from my old road racing days. I raced XC MTB for our program and had a blast and really got pushed to my limits physically. I also got some great insight into racing a different sport at a high level and what things could transcend into CX. I am happy doing it and it really helps me prepare for my CX season. For CX prep I normally end up doing a lot of big miles to prepare for the seasons hard work. A lot of people think the racing is the hardest part of CX, for those of that opinion, you’re doing it wrong. I end up doing a lot of double and sometimes triple work out days leading into the season. Miles, weights, off road, scooter, running. It all adds up and can put you into a 25-30hr week really quickly. 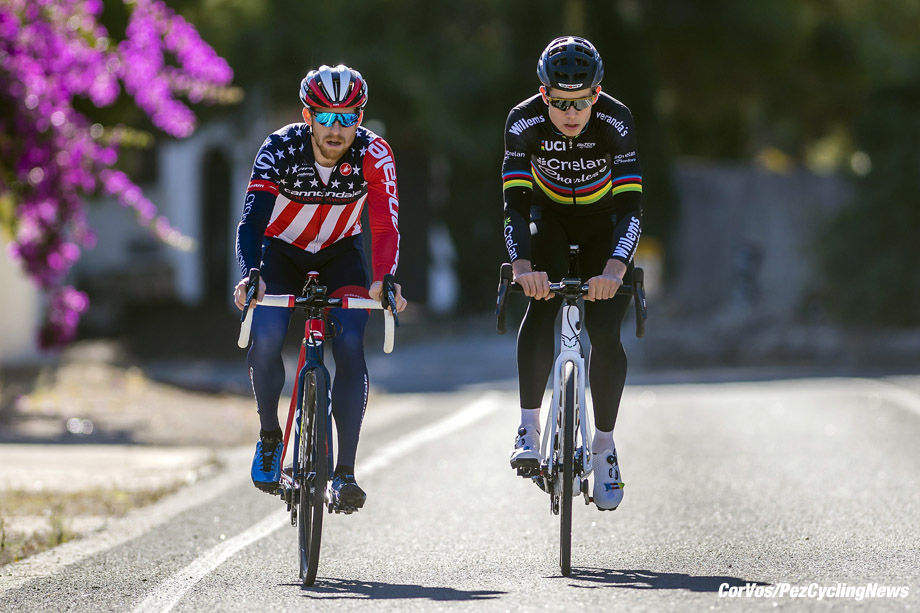 PEZ: Your Euro campaign, where are you based and what will you be riding?
I stay with my teammates at USAC base camp in Sittard, The Netherlands. It’s a great spot close to Valkenburg in Limburg. There’s great riding around this area. I’m currently in Spain preparing for the last block of racing. I will race Pont-Chatou, Rucphen, Hoogerheide and The Worlds in Bogense, Denmark after this training camp. Then I head home!

PEZ: How did your Euro campaign go last year?
Last year was great. I had a great lead in and really got into a good rhythm with my racing.
I was really looking forward to building on that with some more fitness and a better plan this year but obviously got derailed with injury. It was enough to make it work for Nationals and the few races was able to attend. Now hopefully I can get back on track with my remaining goals of a top ten at worlds. 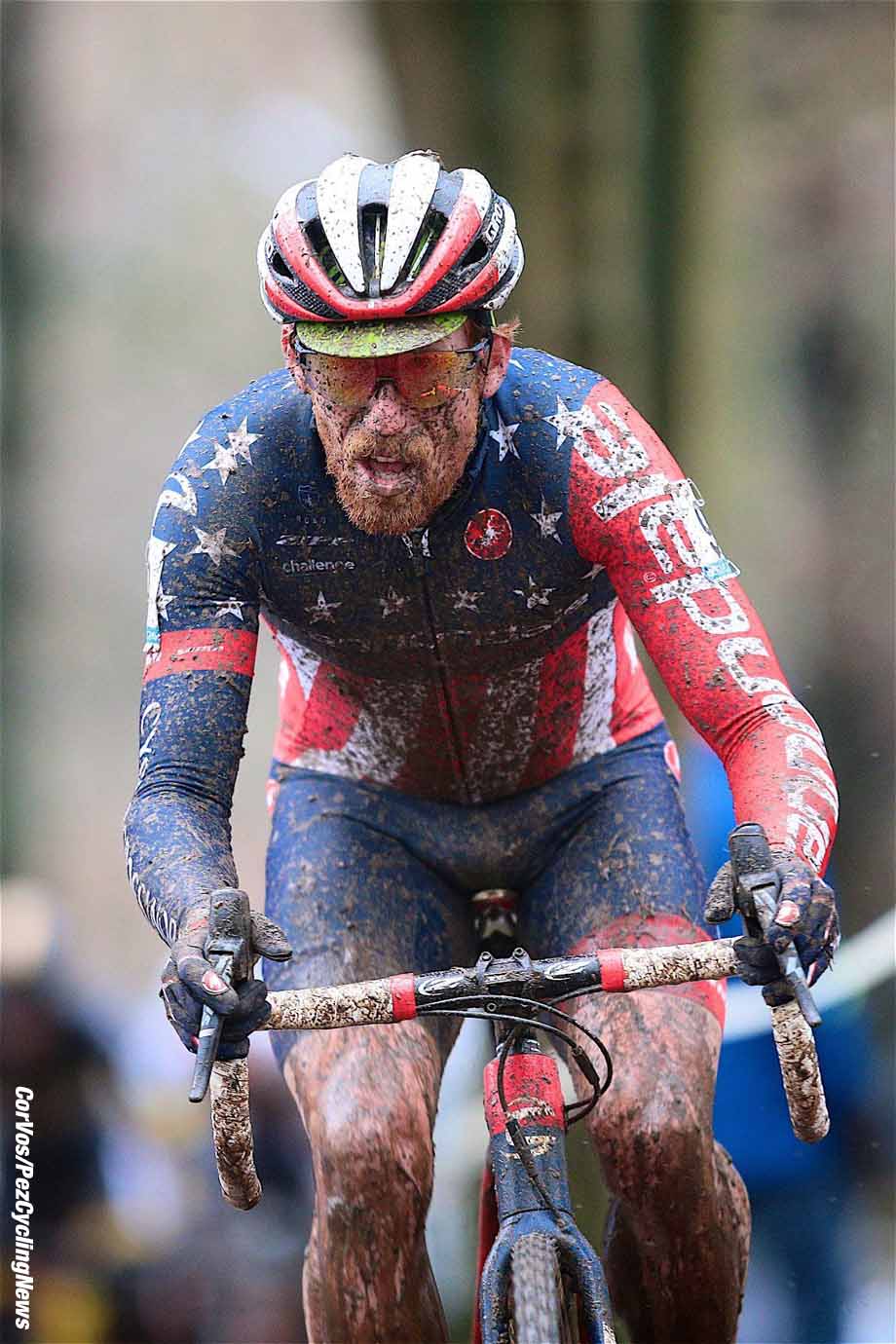 PEZ: And I believe double congratulations are in order – you were married the week before the race – why choose Louisville?
Yeah! I am so happy about that, by Thursday I had already won the week so it wouldn’t get any worse, win or lose. We both like Louisville and it offered us an opportunity to have a low key ceremony with our family and a few friends. It was really lovely and something I will never forget.

# PEZ hopes to be at The Worlds in Denmark to give Stephen a shout – in between our Carlsbergs and hotdogs though, obviously. . . # 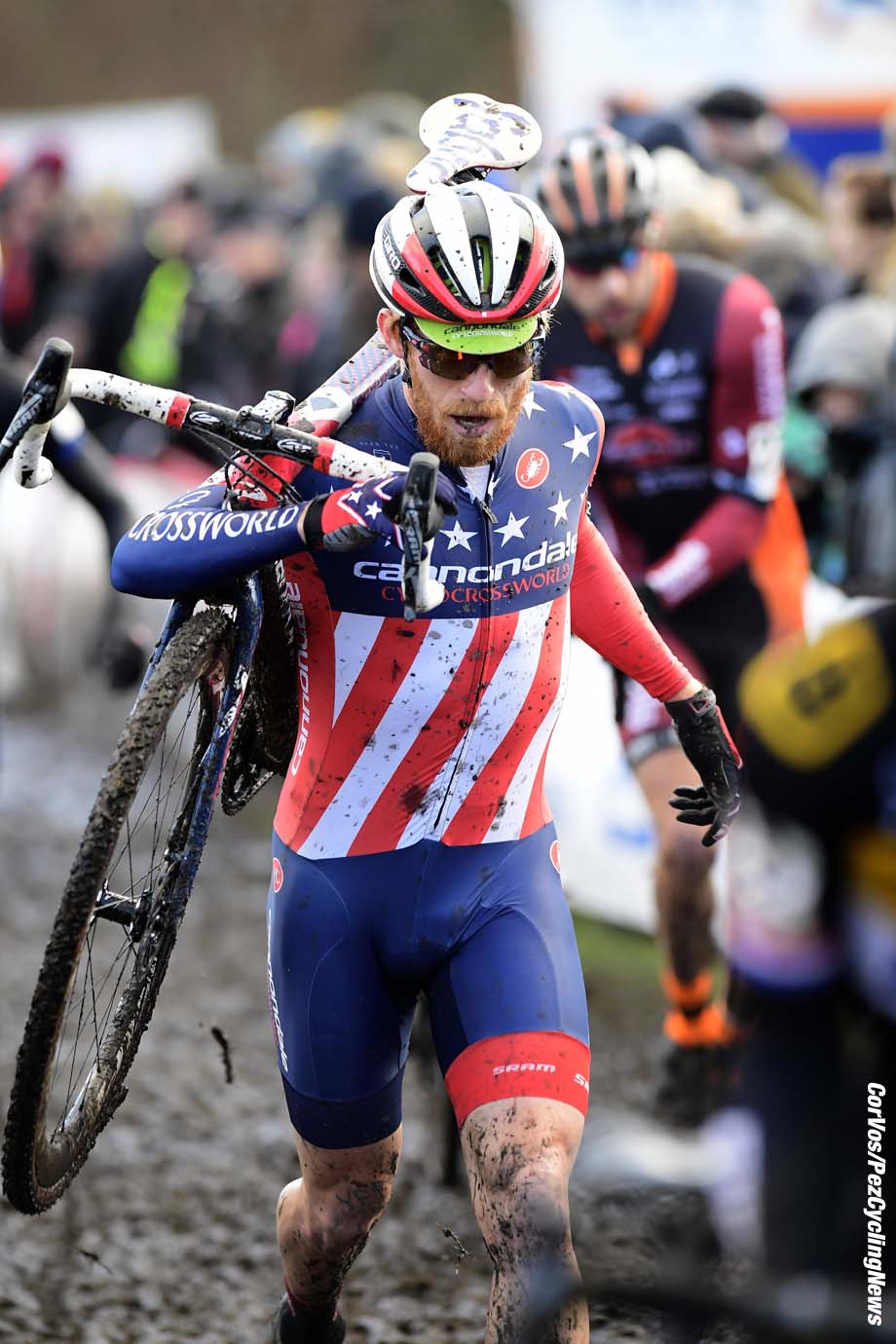