The Olympic ‘amateur’ ideal is long dead if you wish to stand on the podium in London – or Rio. All of the GB cycling team are full time athletes, either with the Sky team or retained under lottery funding with just one goal in life – to win Olympic medals. But a little further down the standings there are still riders who, whilst not quite at the breath taking heights of a Hoy or Kenny, have climbed high up the rankings and hold down a full time job. Jimmy Watkins of the USA has benefited from British ex-Olympic team sprint champion Jamie Staff’s move to the US as National Coach.

But he still has to fit international competition around a full time job as a fire fighter.

Watkins surprised many by making the quarter finals of the individual sprint where he went out to eventual bronze medalist and reigning Commonwealth sprint and world team sprint champion, Shane Perkins of Australia.

And in the ‘minor final’ for fifth to eighth, Watkins took second behind Russia’s former European champion, Denis Dmitriev.

Sixth in the Olympics isn’t too bad for a full time fire fighter.

Watkins took time to talk to PEZ once the London dust had settled. 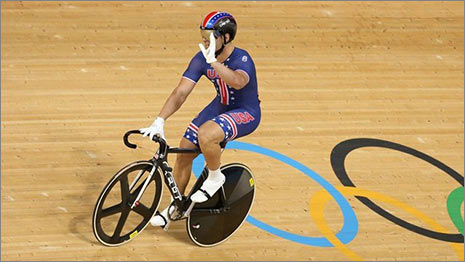 PEZ: How did you get into sprinting, Jimmy?
Jimmy Watkins: I just knew that I would be a better sprinter than endurance rider.

Growing up, I was never an endurance athlete.

When I saw the track sprinting events I just wanted to try them for fun.

PEZ: You have an impressive physique; did you work out with weights before cycling?
JW: Yeah, I grew up playing football mostly, so weight work has always been a part of my life.

I probably starting lifting my freshman year of high school and have been in the gym ever since.

PEZ: You’re a full time fire fighter – how do you manage to fit in training/travel/racing?
JW: It’s very difficult; I have to try and fit everything into a tight schedule.

We’re all allocated physical fitness time at work so I use that to train on my wattbike – or I can train on it after hours as well.

Sometimes we have a lot of calls and I may not get any training in.

For travel and racing, I just have to use vacation or do duty trades – that’s when a guy works for me and I work for him at a later date.

PEZ: And does management cut you any slack?
JW: I don’t get any slack cut for me.

Anyone in our department could do the same as I do to train and race- it’s just very difficult.

PEZ: It must be difficult to ensure your nutrition is 100% with the lifestyle that you have?
JW: For me it’s pretty easy actually.

We all pitch and in and rotate cooking at the fire house – luckily everyone likes to cook healthy so I don’t usually end up eating junk.

The guys are all supportive of my goals.

When I train at work we are usually off to do some of our admin work – like inspections or servicing fire hydrants.

There’s not much down time there.

And at home we have a two year old daughter who always wants to play – I usually get very little rest.

There are not as many races as in Europe, so you end up seeing a lot of the same people who race on the track.

I would say it’s a pretty low key, laid back environment where everyone is just out to have fun.

PEZ: Where’s your nearest velodrome to home – what’s it like, do you have good access to it?
JW: The closest track to me is the Los Angeles velodrome – it’s about 120 miles from me, so I usually only train there once a week.

Sometimes I will stay the night and get two days in, but that only happens once or twice a month.

PEZ: It must be tough to find training partners at your level, in the US?
JW: Yeah, in my home town there is no one so I am always training by myself.

When I travel to LA we have a good group, though.

PEZ: Do you get help with bikes from Felt or the Federation; and what about tyres – they’re not cheap?
JW: Felt bikes has been a sponsor of mine since 2008 – they’ve have been absolutely great and have excellent equipment.

Also Bont shoes have helped me out and Vittoria tires sponsored the ‘Project London’ team which I am a part of.

One of my road days is just a recovery spin and my Saturday ride is usually two hours.

Most of my training is done on a wattbike and rollers.

PEZ: How much of a difference has Jamie Staff being on the scene made?
JW: It’s made a huge difference.

Before Jamie came over to the US from England, there was no sprint program.

Now you have guys that have moved from all over the US to come and train with him.

It’s been a great experience to work with an Olympic gold medalist – he’s a really great guy to be around.

PEZ: What did you think of the London track and the ‘Olympic Experience?’
JW: It was fantastic.

I got to walk in the opening ceremony and will remember walking into the stadium for the rest of my life – it was very cool.

The velodrome almost rivals that experience.

It was the most amazing crowd I have ever seen in any sporting event.

Whenever GB would break a record or win the noise was deafening – I almost had to plug my ears, it was amazing.

PEZ: Would you have settled for sixth before the Games?
JW: Absolutely – It was a great result for me.

Of course, everyone wants to win a medal but I am a realistic person – I’m very happy with my result.

PEZ: Mentally, did you feel disadvantaged against full time bike rider opposition?
JW: Well, I’ve known my entire career that I have been at a disadvantage.

I just do the best I can do and see where I end up.

I wouldn’t say it affects me mentally – I’m just there to have fun and do my best.

PEZ: What will you take away from London as areas where you need to improve?
JW: I feel I raced really well.

The thing I would need to improve would just be my speed.

If I could make some performance gains I would be right up there with the best – but that’s very difficult in my situation.

PEZ: Has the US media made much fuss about your performance?
JW: I have had a ton of support from the local media.

Everyone in my home town is very supportive – it’s been humbling.

PEZ: What’s the next goal?
My next goal is to get my life back in order.

It’s been a long two years of qualifying and I have neglected a lot of things at home.

I need to pay back all the time my wife has spent alone, taking care of our daughter.

She has been really great and I owe her, big time.