It’s only metres from the finish in the final stage of the 2006 Vuelta a Cuba and US rider Joe Papp has it in the bag. His wife is in the cheering crowd as he begins to raise his arms in celebration – but an instant before he crosses the line there’s a yellow and red haze to his right – Slovenian Borut Bozic glides past the American to take his third stage win of the race. Bozic has gone on to great things since that dramatic win in 2006. PEZ recently caught up with the speedy Slovenian. Read on!

Papp’s exuberance turns to despair, amplified by the ease with which Bozic slipped past him, admonishing Papp beyond the line that; ‘you’ll never do that again!’ Papp knows he would have won had he kept his hands on the bars and in every sprint he contested thereafter he kicked hard for the line irrespective of whether he thought he was clear – lesson learned! The intervening years have seen the two men’s lives take different paths. 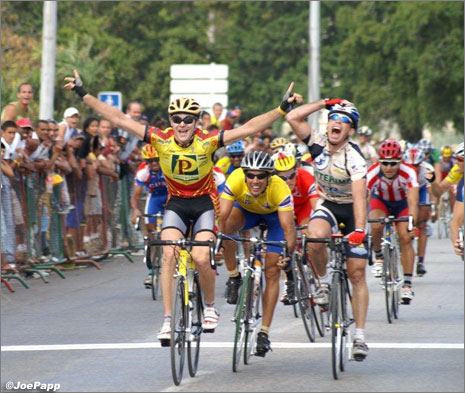 Papp made mistakes which he’s still paying dearly for, whilst Bozic went on to be one of the best roadman sprinters around.

In 2008 Bozic triumphed in the hotly-contested Slovenian road race championships and went on in 2009 to claim a Vuelta a Espana stage as well as two stages in the Tour of Belgium plus stages in the Tours of Poland and Limousin. 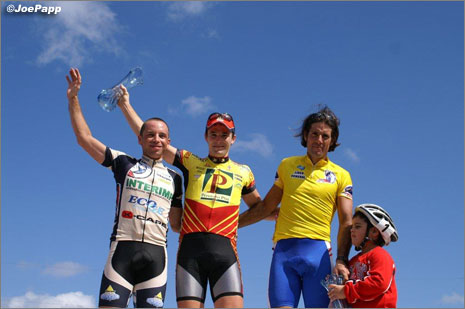 Papp now writes extensively about professional cycling and is a canny observer of the sport and its personalities.

He thought it might be interesting to reconnect with his old rival; and with the help of Frank Kwanten – commercial manager of the Slovenian’s Vacansoleil pro continental team – the interview went ahead.

How old were you when you started cycling and why did you get into it?
I began cycling when I was 10 years-old; my friends used to cycle, my dad used to play football, no one in the family was into cycling. My big hero was my countryman Valter Bonca, he was a professional from 1992 to 2006, he rode the Seoul Olympics, won the Tour of Austria in ’89 and ’92 and the Tour of Slovenia in ’95. He rode for for the likes of Jolly, Amore & Vita, ZG, Glacial and Mroz.

What’s your family situation?
I’ve been married to Klemintina since January 2009 and am the proud father of our son, Sas. We live in a small, nice town called Idrija in Slovenia. 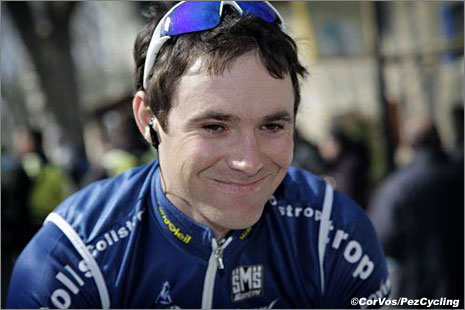 Did you do other sports prior to cycling?
I have done a lot of sports; for the first three years I did skiing and cycling, but as the goals got higher and higher in cycling, I concentrated only on that.

Was there a Soviet-style approach to sports at school?
In Slovenia there are sports systems in the high schools, but most sportsmen actually start before then, that was the case with me.

You were Slovenian ‘Cyclist of the Year’ in 2009, you must have a lot of young fans?
It’s difficult to judge my reputation with young cyclists; in Slovenia we have quite a few Pro Tour level riders, to be one of them is a pleasure and an honour. 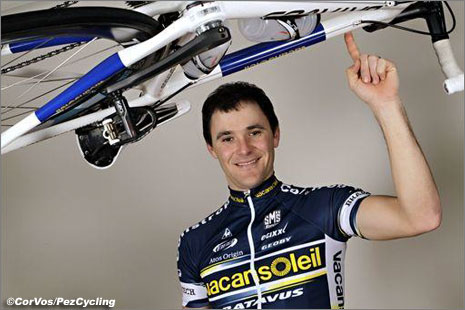 How old were you when you realised you could make a living from cycling?
I realised that I was able to achieve great results and live off that when I was 24 – if I wasn’t a cyclist I’m not sure what I would do, but probably a professional at some other sport.

I don’t even think about what I will do after cycling, I am too focussed on my results – this is my passion!

How do you spend your free time?
I like to spend my free time with my family, we like to go to see a film or spend time with friends. I also like to watch at least the last 10 kilometres of big races which I am not riding, on TV. I like all sorts of music, too – it lifts me when I’m tired.

How are your language skills?
As well as my native tongue, I speak English and Italian – I’m with a Dutch squad, but it’s a difficult language, I know a few words but I haven’t studied it or taken a course.

Do you embrace the digital age?
I am not really a computer fan, but I use it, mostly internet and of course, Skype – which is my bond to Slovenia when I am abroad. I have a Facebook account but don’t use it much. 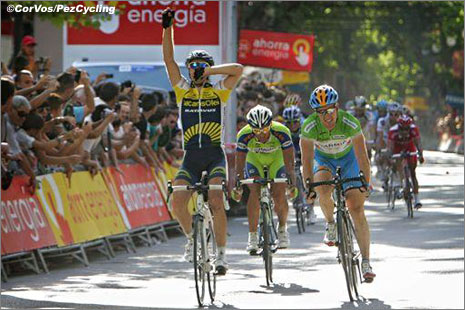 Your Vuelta stage – ‘just another win?’
No, winning that stage was a very special moment and one of the most wanted goals of the past season. I still like to recall in my mind that moment of crossing the line to win. For me, cycling is not just a job, it is a way of life.

What sort of speed are you hitting in sprints?
We reach really high speeds, sometimes in good conditions we exceed 70 kph. 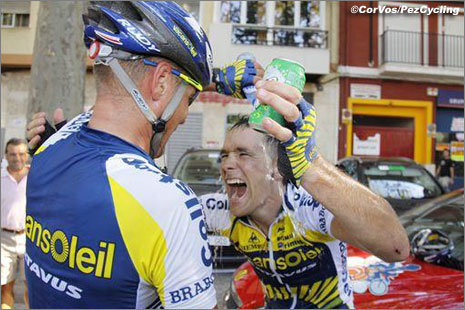 Bozic was overjoyed with his first Grand Tour stage victory.

What’s your main goal for the rest of 2010?
My main goal this season is a good result in the world championships in Australia; I didn’t start the season well, due to health problems but I am getting better and hope to be in my best form for Melbourne.

What’s the hardest race you’ve ridden?
Every race can be difficult, a lot depends on the weather – rain, wind, cold…According to most riders I have spoken to, the hardest race of all is the Tour de France. My favourite race until now is the Vuelta.

Cav has Renshaw and Eisel – who do you have?
I cooperate really well with Marco Marcato and Alberto Ongarato, we can be really fast together – but I believe that every person in my team helps me to achieve good results.

Vacansoleil is Pro Continental, any disadvantages to not being Pro Tour?
There is one weakness – we never know our race programme 100%. We are a good team but cannot choose our races, we need to be invited. 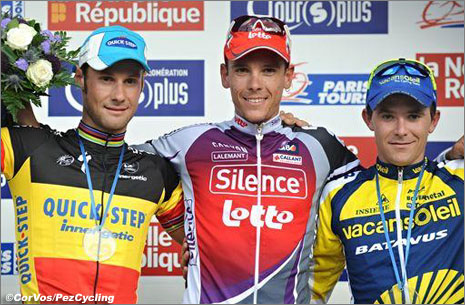 Bozic on the podium last fall with Gilbert and Boonen at Paris-Tours.

Vino – what do you think of him?
I don’t want to judge! Alexandre achieves great results and I respect him for that.

Tell us about your training.
I always train with a power meter, I record everything and find that is very helpful. I do around five hours each day and in winter perhaps four, due to the lower temperatures and shorter days. I also ride my mountain bike in the winter but after the first two weeks in December, I only train on the road bike. I have a favourite route for the summer of around four hours which has a 20, a 30 and a 40 minute climb.

Climbs – which one have you found hardest?
The most challenging climb was the Passo dello Stelvio in Italy; I was so happy about reaching the top that I forgot to check how long it took me.

Back to training – what’s your least favourite aspect?
When I’m not in good form, all training is difficult – and I really don’t like pre-season training.

Do you train specifically to improve anything?
I’m a sprinter but I have to train in the hills, too – it’s impossible to race as a pro if you can’t get over the hills.

And if you could do just one more thing in cycling?
Win a stage in the Tour de France!

***
We wish him luck with that ambition, if Vacansoleil’s recruitment drive goes well over the winter then we might well see Borut on the start ine in 2011. With thanks again to the man himself and to Frank Kwanten.