A Spanish rider on an Austrian team does sound strange, but Víctor De La Parte has also won the team’s home stage race against strong opposition and on one of the toughest climbs on the European pro circuit. De La Parte has also raced for Spanish, Greek and Portuguese pro squads and has experience to spare. Ed Hood caught up with the man from the Basque Country to hear his story.

‘An absolutely outrageous stage’ is how the race website describes the day which incorporates it – Daniel Friebe’s ‘Mountain High’ – the reference work for ‘Europe’s greatest cycle climbs’ says; ‘more challenging than any of Monte Zoncolan’s three routes, steeper than the Fedaia, or anything on Monte Grappa, the Angliru or Mortirolo.’

If you need more clues? 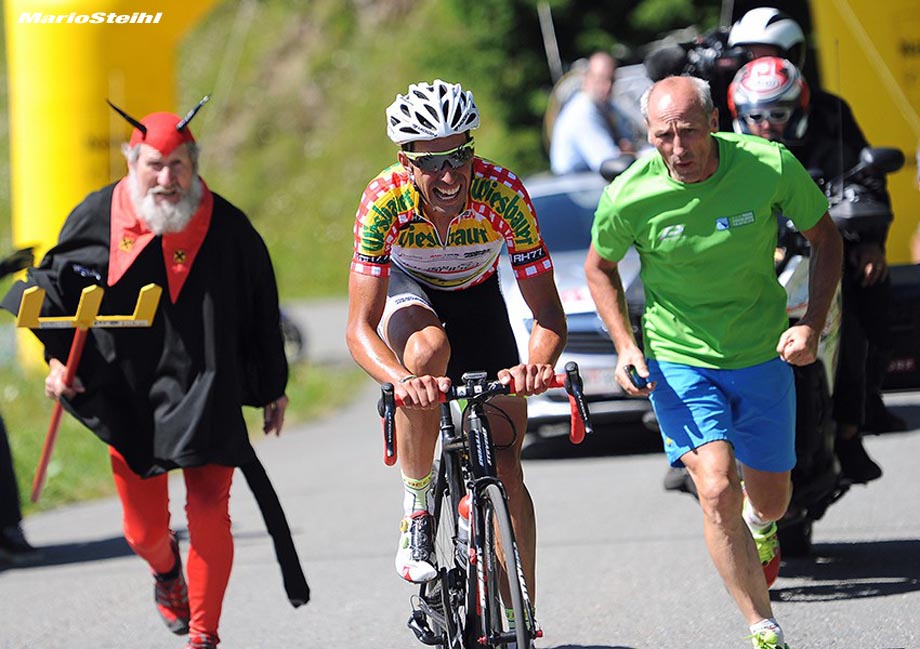 The Kitzbuheler Horn is often over looked in debates about Europe’s toughest climb due the fact that it’s in Austria and has never been visited by the Giro, Tour or Vuelta – but it’s savage. It does however feature regularly in the Tour of Austria – a race which runs concurrently with the Tour de France and so it too is over looked.

The man who took the 2015 laurels atop the Horn and went on to win overall was Víctor De La Parte riding for home Continental team Vorarlberg – he was better than the best that six World Tour and seven Professional Continental teams could throw at him; he won another stage along the way to make him hot property on the transfer market.

Having written enough words about Le Tour we decided that a chat with Víctor would be a nice change, here’s what he had to say to PEZ, soon after his great win:

PEZ: A great ride, Víctor congratulations; first question – do you consider yourself Spanish or Basque?
Ha! I’m from Vitoria-Gasteiz so I have to say Basque! They’re all crazy there – I couldn’t say anything else!

PEZ: How’s the race scene in the Pais Vasco?
Of course we’ve just had the Clasica San Sebastian – or Donostia-Donostia Klasikoa as we say in Basque – but the local scene is not as strong as it was 10 years ago – there are less races, now.

PEZ: You started your pro career with Caja Rural. . .
I was with their amateur team for five years then moved up to the pro squad – 2010 was a good year for me where I won the Vueltas a Navarra and Salamanca and I was pro for 2011.

PEZ: 2011 was a little quieter for you in terms of results?
I was full pro for the first time but I had some promising results; I was top six in a stage of the Vuelta Asturias for example.

PEZ: But for 2012 you went to the Greek SP Tableware team?
Yes, I had problems with the manager at Caja so joined SP, it was a good team, I rode alongside Ioannis Tamouridis (read the PEZ Ionanis interview HERE) and we had a good year.

I’d prepared very well over the winter and won the Sibiu Tour in Romania and was second overall in the Tour of Romania. I was with the team for two years and in 2013 I had good results again, wining the Tour of Algeria – we didn’t finish 2012 until November in China so it was easier to keep my shape over the winter.

PEZ: Portugal for 2014 and Efapel.
Yes, I received a call from Portugal and that was a nice year for me. I prepared at altitude for the Volta – Tour of Portugal – that was the team’s most important race of the season; I won the prologue and held the leader’s jersey for three days. And coming in to the Volta I won the prologue in the GP Joaquim Agostinho and was second on GC. I was very happy there and would have stayed but I got the call from Vorarlberg and it was a new challenge for me. 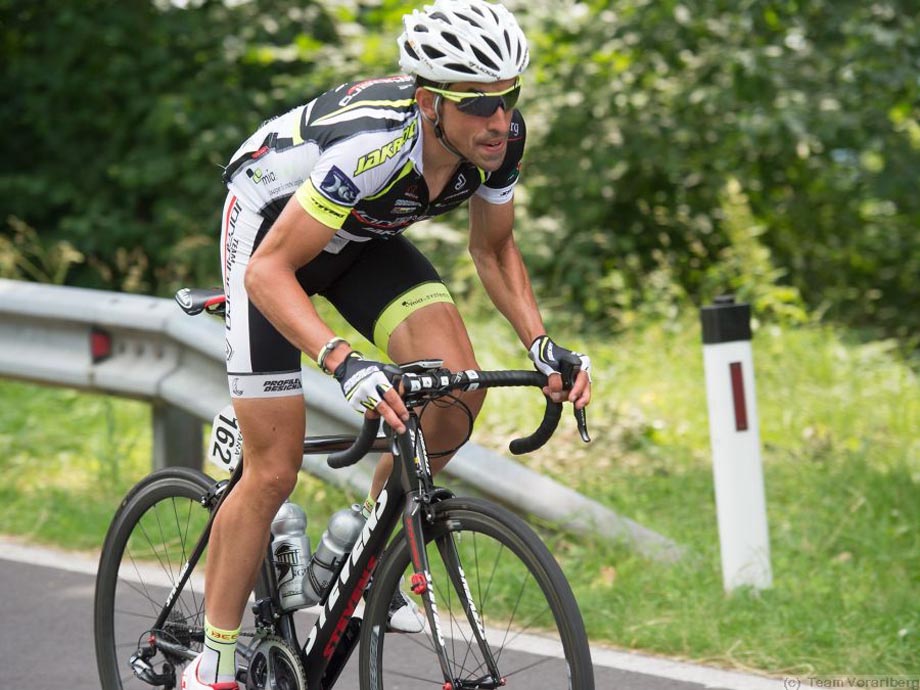 PEZ: And you won the Fleché du Sud five days in Luxembourg for them?
It was my first time in Luxembourg, it was on small roads and whilst I finished fifth on the first stage I wasn’t sure it was the race for me. But I attacked on the last stage and I took the overall – that was an important race for the team so it was nice to win.

PEZ: And a huge result in Austria.
With the team being Austrian it’s the most important race of the year and it was my focus since December. I prepared at altitude for it in the mountains around Madrid and knew I was in good shape; I was two kilos lighter than 2014 but still with the same power. From the first day of the race everyone was talking about ‘The Horn’ and saying that it would be a good stage for me. It’s a 10 K climb at 12% average and the day was warm, which suits me. I decided to ride the climb at my own tempo; all day there had been big fights but my strategy was to mark the race leader. I felt tired at the start of it but think that everyone else was even more tired! 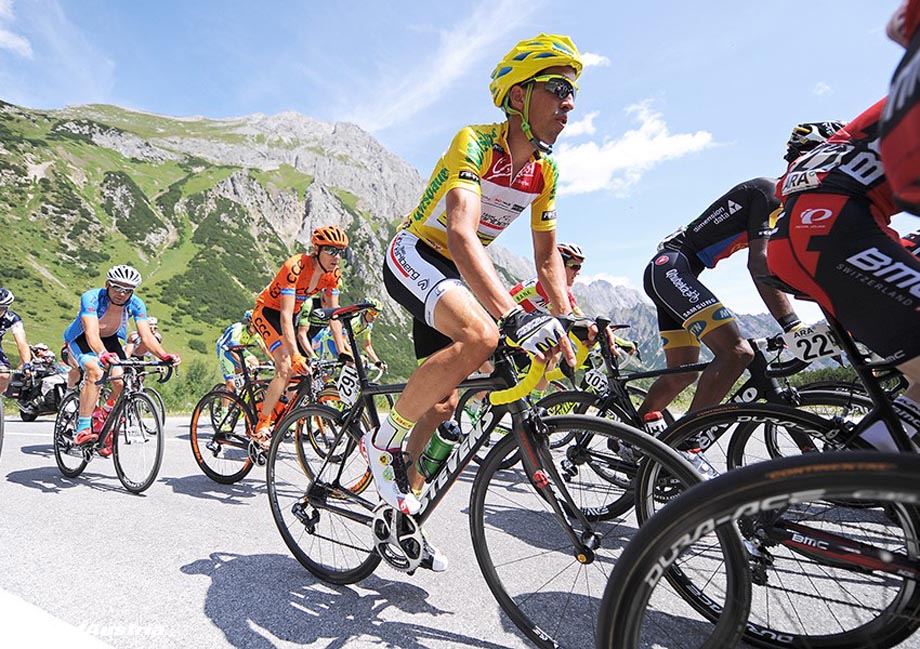 PEZ: Has there been a lot of Media attention from home?
The Horn was my second stage win – and after that my phone just went crazy; it never stopped with TV and newspapers.

PEZ: How was your recovery after the race ?
I haven’t had much chance to recover because there are a lot of criteriums in Austria after the Tour and it’s important for the team’s sponsors that I ride them all.

PEZ: Do you have a home in Austria?
No, I still live in Vitoria and fly in and out as I have to – if you’re a pro cyclist then you have to get used to traveling!

It’s been a busy year – lots of travel and I haven’t spent that many days at home. Vitoria is perfect for training with nice quiet roads on the flat and in the mountains too – except in the winter when the weather is crazy and I go down to the south of Spain to train.

PEZ: What’s next?
We have the Czech Tour then I think I must take a break – I’ve raced and traveled without a break from February to July and need a rest. 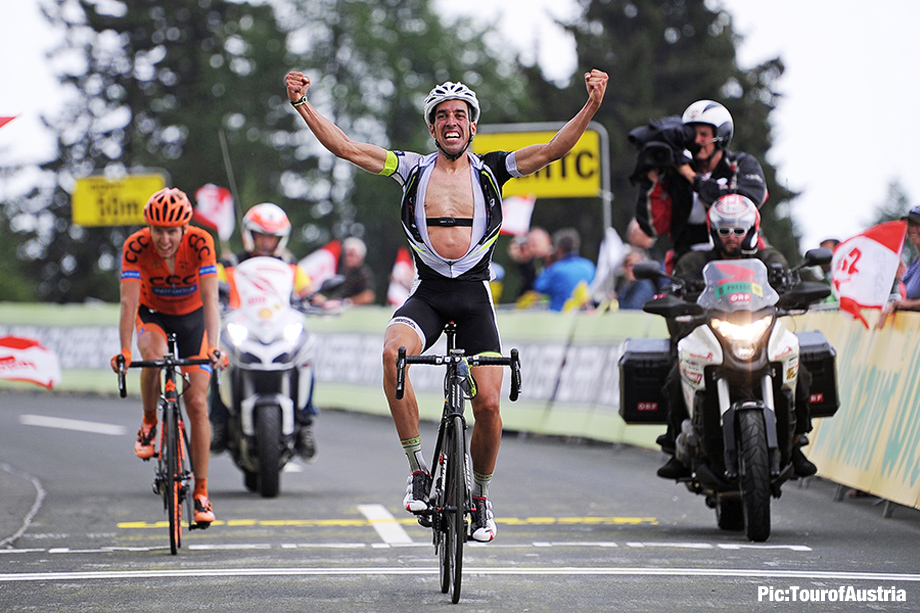 PEZ: You must have offers for 2016?
Yes, there are many teams interested but I like it with Vorarlberg – they gave me my chance – my agent is looking into the situation for me.

PEZ: And what would you still like to achieve in cycling?
For sure I want to ride a Grand Tour – I want to test my limits. . .

Thanks to Víctor for his time. Eskerrik asko David eta zorte ona.

Lost In An Italian Hill Town