Sky turned nasty, driving an echelon as Movistar’s race leader Alejandro Valverde lay sprawled in the road; then BMC became involved in the ‘bordure’ mix. Meanwhile Movistar seethed – and the polemics continue. But Orica-GreenEDGE’s Simon Clarke was too busy winning his first Grand Tour stage to get involved in politics.

Albeit BMC’s Brent Bookwalter said later; “…things immediately turned hectic, it was a bit of a free for all. Sky was riding and other guys were going up there wanting to ride in the rotation, but they wouldn’t even really open up. They (Sky) didn’t want any help. So it was a matter of keep each other and Steve Morabito out of the wind and staying together.”

Clarke is another product of the Australian Institute of Sport’s team pursuit ‘production line’: he was a member of the winning 2004 world junior championship team, along with a certain Matt Goss.

In 2005 his domestic palmares were impressive; including a GC win in the Tour of the Murray River – but a third place on a stage of the Giro delle Regione showed that the European scene didn’t overawe him. 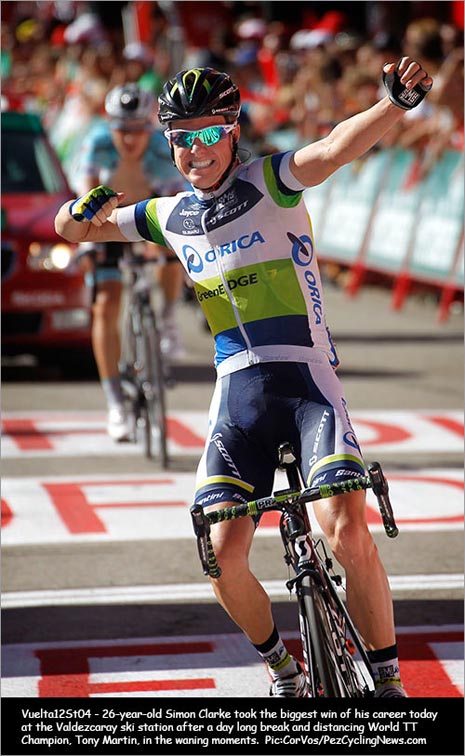 The following year saw him become Australian Madison champion with Miles Olman and win a stage in the Vuelta Ciclista a Navarra.

In 2007 there were more podiums in Italy at the Liberazione and Regione as well as one in the Australian U23 road race championship.

The following season he made the Aussie U23 rr title his own and racked up wins in Italy and Japan.

The pro ranks beckoned, but unfortunately it was the doomed Italian Amica Chips team with whom he signed; despite the limitations of the squadra he placed top ten in races like the Trofeo Laigueglia and Insubria.

As he told us; “I was with them for three months and then they folded, we did 1.1 and HC races, but no Pro Tour races.

I spent the second half of the season with ISD. There were 25-odd people looking for a job when Amica folded but I was lucky that ISD boss Luca Scinto was a pro with Mapei and the company still sponsors the Australian Under 23 team – so there was a connection, there. They were happy with how I rode for them, so I was retained for this year.”

When the team collapsed, there was that lifeline from Luca Scinto and his ISD team, for whom Clarke completed 2009 and rode for in 2010.

He rode a good programme with ISD, including Milan-Sanremo – but when he told them towards the end of 2010 that he was leaving to ride for Astana in 2011; they promptly stopped entering him for any races.

And as a ‘True Blue’ Aussie, he couldn’t say ‘no’ when GreenEDGE came knocking at the start of 2012, and now he’s grabbed them their second Grand Tour stage win – after Matt Goss’s Giro stage win.

Simon spoke to PEZ between breakfast and sign on for stage five:

PEZ: A moment to savour, Simon?

Simon Clarke: For sure, it’s not every day you win such a prestigious stage. It’s a huge result for me, not just because it’s my first professional win but also because it came in a Grand Tour.

PEZ: Why target that stage?

SC: It was the first real opportunity – I had to make sure I was ‘off’ the GC to be allowed to get in the break. I did that on Monday, I lost ten minutes and that got me off the classement.

And I knew it was the first stage where the bunch would let a breakaway go and gain time. When we went, I knew it was a good opportunity and I had the confidence.

PEZ: It was a windy day for five guys to away.

SC: It was an unbelievable day, with the wind and the heat. We had to work hard from the start but choose an intensity that we could ride at for the full distance.

PEZ: You must have put away a lot of bottles – and is it not hard to eat in that heat?

SC: I was drinking all the time, and we were also placing ice stockings inside our jersey to keep us cool – that works well. You do rather have to force the food down – but you know you have to do it, that’s just part of the job.

PEZ: Did Martin try to ‘burn you off?’

SC: I was expecting him to make the classic time trial rider’s attack at one kilometre to go – but it never really happened, he attacked around the red kite, but then he hesitated. I stayed behind him and bided my time for the sprint.

PEZ: Astana’s Bazayev wasn’t so far behind you, was he?

SC: Exactly – that was the reason I kept riding pretty hard on the climb. My DS was saying to me to make sure to save enough for the sprint; but I was more conscious of keeping Bazayev at bay – he’s fast at the finish. The gap at the end was 22 seconds and the information I was getting was that the gap was around 20 seconds, all the way up the climb.

PEZ: Your season started later, this season – no Tour Down Under.

SC: I think that’s a minor detail, with a team like GreenEDGE with all those Aussies there’s going to be around ten guys who don’t go. The race becomes more of a sprinters’ race each year – and that’s not really my style of racing. Whilst the TDU was on, I was on a training camp in the mountains of Victoria. We did a lot of work – more than if I’d ridden the TDU, I’d say.

PEZ: You had good form early, with fifth in Haut Var.

SC: I came over to Europe in very good shape – and as I said, I think a lot of that was down to the training camp we did in Victoria.

PEZ: You rode the Ardennes Classics rather than the cobbled ones, this year – which do you prefer?

SC: Every race I’ve ridden this year has been a first – that makes it hard to think about winning them. I’ve learned a lot, this season, especially in the Ardennes races – if you look at the guys who win those races, they’ve ridden them about ten times.

Last year, I know I was in the action in the Tour of Flanders; but that’s my style of riding. If I’m in the bike race then I want to be part of it – but the Ardennes suit my characteristics much better.

PEZ: Your form was good coming into the Vuelta, with two top three placing in the Tour of Burgos.

SC: I finished racing after the Dauphine, I was tired. I had a bit of a holiday and then began training again – I did a lot of hard work in the mountains and got down to my racing weight, which makes a big difference.

PEZ: Are you still living in Varese and training with Cadel?

SC: Yes, still there – I train with Cadel when we’re both home, but that’s perhaps not as often as we’d like with us riding our different programmes.

SC: Yeah, the mentalities are very different but it’s not as if one is better than the other – they’re just different. I wouldn’t trade one minute of my time at Astana – I learned so much, there. But it’s good to be on Orica-GreenEDGE with the Aussie guys, I feel very much at home.

SC: Obviously I don’t know much about it because I was up the road all day! I guess I’ll find out more about it, today. But what I can say is that Movistar have attacked when other riders have crashed, this season. I’m thinking specifically of when Levi Leipheimer crashed in Paris-Nice. If you give it then you have to be able to take it.

PEZ: And was there champagne, last night?

SC: Yeah – we all had a glass with dinner.

PEZ: Will you be hiding in the bunch, today?

SC: For the most part of the stage; but I want to be part of the lead out for Alan Davies – maybe we can get him to go one better than his second place on stage two ?

PEZ: I remember you riding the Grenoble Six Day, as an U23 in 2006 – was this what you dreamed about, back then?