Mads Wurtz: World Junior and Under 23 time trial champion, a big future ahead of the young Dane, offers of a place on a WorldTour team, and what does he do… turns it down. Ed Hood caught up with Mads to get the full story from the man himself.

Not many riders turn down a WorldTour ride but Denmark’s 2015 Richmond World U23 Time Trial Champion did that very thing. Despite the big bargaining chip of a rainbow jersey on his back the 21 year-old has decided to wait another year before he makes the leap. But his season wasn’t just about the Worlds; there were stage wins in the Tour of Denmark and Tour de L’Avenir for the man who’s already been a world junior time trial champion and winner of the junior Paris-Roubaix.

And thanks to the kind offices of the Corso management company and Xylon Van Eyck, Mads took time to talk to PEZ, recently.

PEZ: When did you first realize you were a ‘chrono man, Mads?’
Mads Wurtz: When I was 15 and a first year U17 rider I got fifth or sixth in the national TT championship and I was the best first year rider. From that time I started focusing on my time trial and a year later I won the U17 TT championship. But I have always been good on my own since I started cycling when I was eight years-old. But my focus on the time trial started when I was 15. 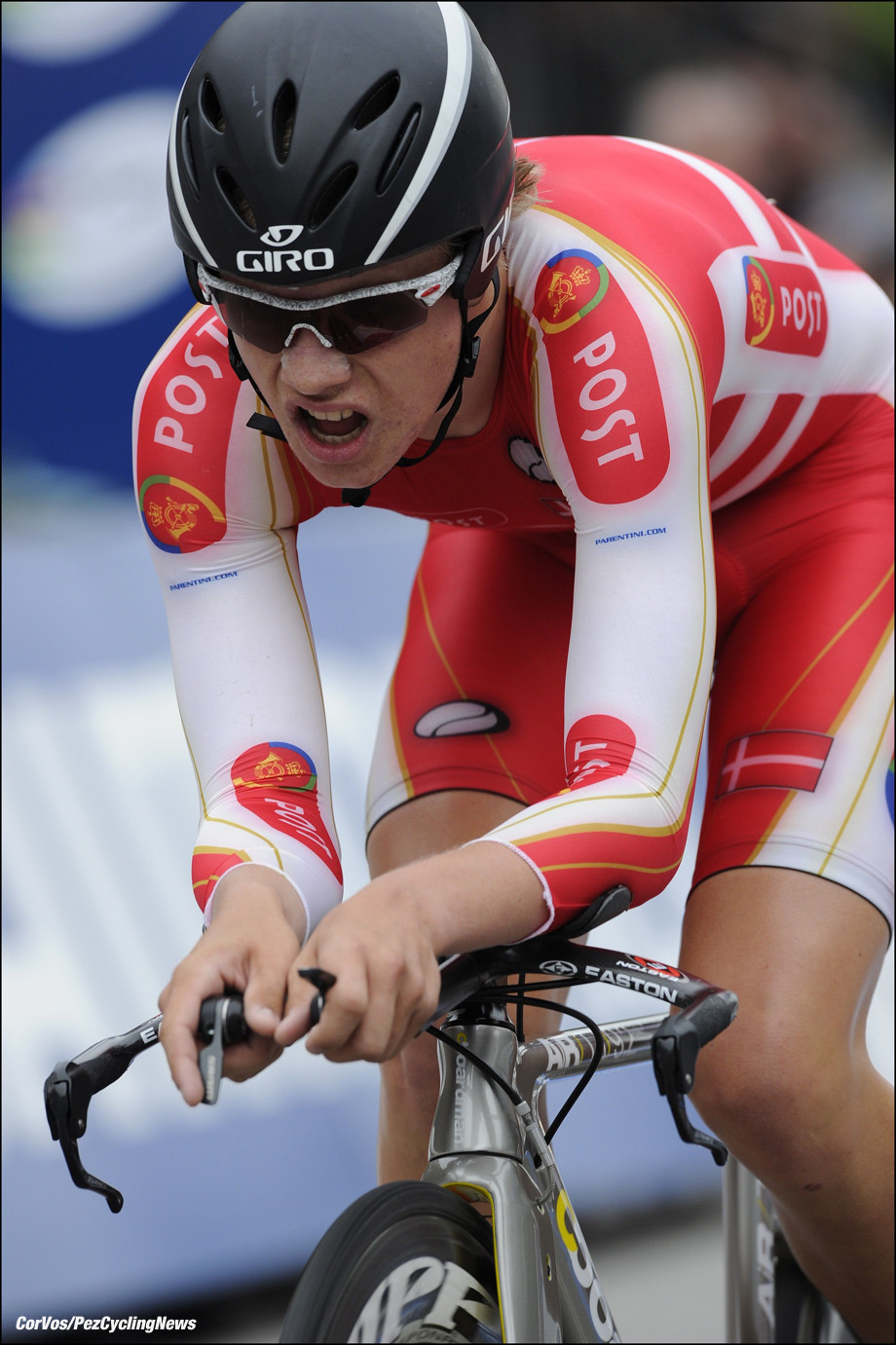 PEZ: You were world junior TT champion in ’11 but ‘only’ 8e in ’12, why?
In 2012 I crashed in the Niedersachsen Rundfahrt and got a knee injury so I couldn’t ride for almost three weeks. That meant I only had three weeks of training for the worlds so in Limburg I wasn’t 100%. Without the crash and the injury I’m sure I would have won; I was only 20 seconds too slow.

PEZ: Tell us about your Worlds preparation – were you tired after L’Avenir?
After the L’Avenir I felt stronger and not really tired. So after a few days restitution I started the prep for the worlds. I did many kilometres on my TT bike and did lots of power training when I was on the TT bike. That’s why I could keep pushing that heavy gear you saw on TV. I didn’t really do many intervals because I knew my shape was good and I felt fast on the bike. So I just kept training staying in the position and training my power for the big gear. I’ve heard many saying I was pushing a too heavy gear but that’s just my style when I’m on my TT bike. I’ve been doing it the whole year and I’ve won every TT this year – except the Elite Nationals where I got third and beat most of the pros. 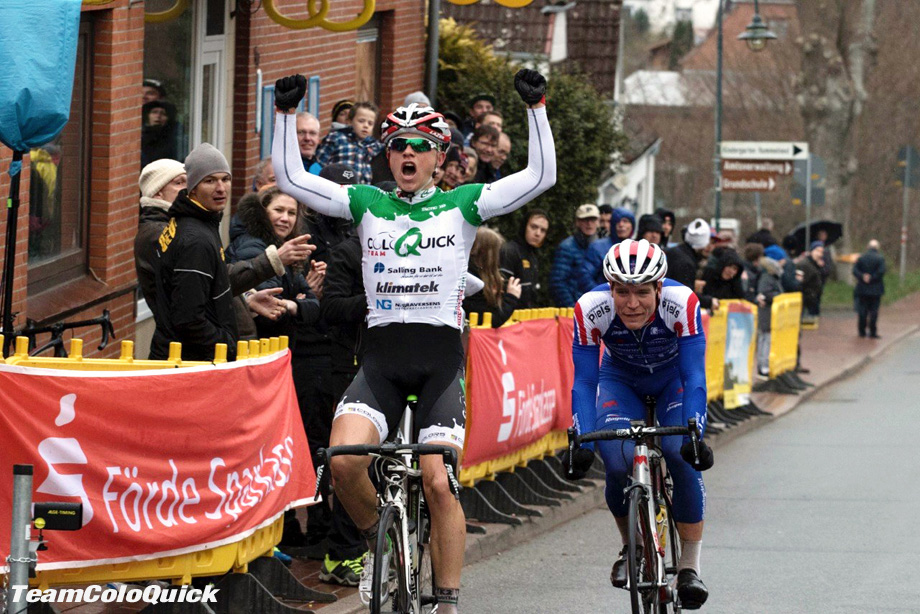 PEZ: What do you remember most about the day you won?
I can’t point out a certain happening of the day. Everything stands clear in my mind but the biggest moment were definitely the winning hug with my father who traveled all the way to Richmond just to see me. I had told him I was 100% confident I was going to win so he couldn’t just stay at home – he had to go there too. So when Kämnas time ran out and I was the winner I went straight to him for a hug. I could feel he was crying; it was just a really big moment for the two of us. He’s been the person I looked up to in my young years as a cyclist and he has been my greatest support all my life. Also, when I got back to my hotel room I just sat on the floor in my jersey and was looking through Facebook, Twitter etc. To see how many people wishing me congratulations on my win and all the messages meant a big deal to me also – it took me almost an hour to get through it all!

PEZ: Tell us about your bike.
My bike is a Specialized S-Works Shiv. It’s geared up with the SRAM Red 10speed. My front wheel is a Zipp 808 Firecrest and the rear disc is by Lightweight. I’ve been using this bike the last three years and it’s the best I’ve ever ridden. I had lots of doubts about which disc I was going to use; I had also the Zipp Super9 in my armoury, but in the end I went out with the Lightweight – it was a good decision.

PEZ: Have you been in the wind tunnel to get your position right?
I haven’t been in a wind tunnel – the set-up is just as aggressive as possible. I’m doing lots of stretching out and core training so I’m able to be in this position. 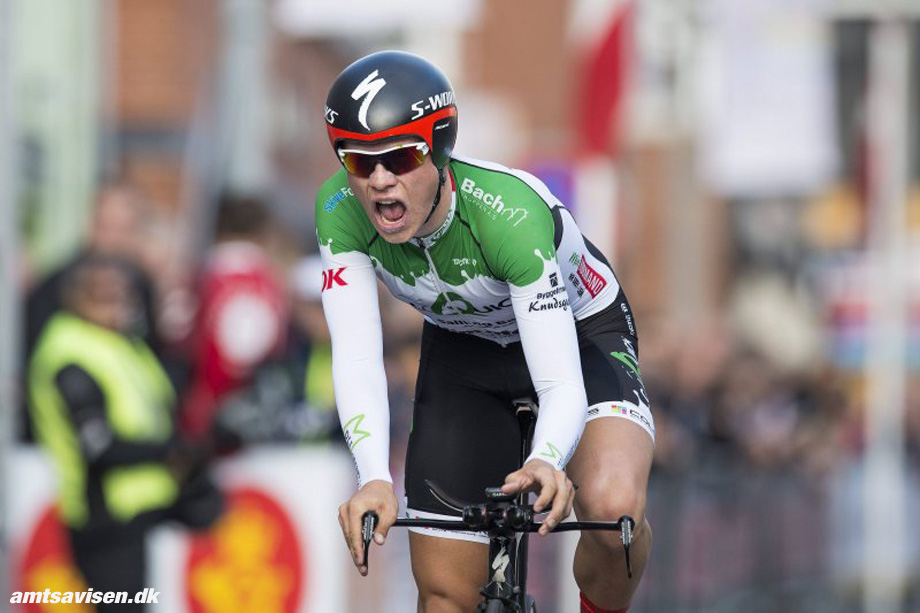 PEZ: Do you have a coach? What’s the ethos?
My trainer and coach is Morten Bennekou who’s the national coach of U23 Denmark. We started working together in November last year. For me it meant a great deal to have him as a trainer and I started working myself more seriously. I did some extra work on losing some weight and did the training to almost perfection throughout the winter. When I started the season I felt better than ever, and I just got better and better during the season. We have build up a great partnership with trust and the motivation is big from both sides. He listens to me and many times this year I’m the one who has taken the hard decisions about the training or the races. When we look back we both agree that every decision I’ve made this year was the right decision. It has been amazing to have a trainer who trusts that much in me but in the end it has just made me better and my head is stronger. But now he’s going to Giant–Alpecin we have to stop our work – I totally understand his decision and I’m happy for him and wish him good luck with his new job.

PEZ: Do you have a ‘chrono role model?’
My big TT idol is Tony Martin. His style on the bike and his ability to push himself far over his limits is amazing. I’m also good at giving it everything and more when I’m in the time trials. Also the power he has pushing the big gears is something I try to do. I compare myself to him a bit with my style with the big gears and then I’ve learned to go beyond my limits and destroy myself in a time trial like Tony Martin. And then he’s just a cool rider who can also win normal races. 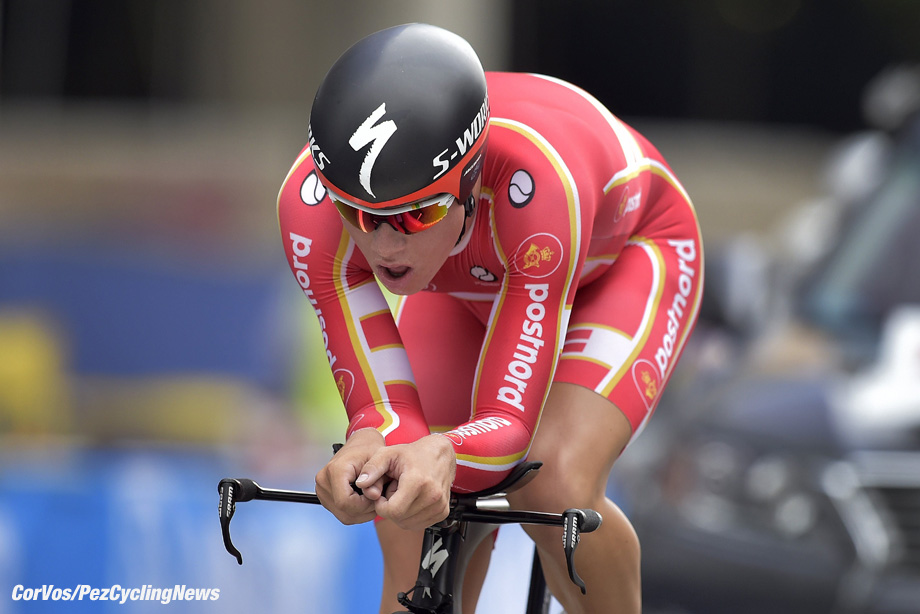 PEZ: You won Paris-Roubaix as a junior, is that a race, which interests you for the future – and you were 21st in the U23 Ronde, will we see you back there?
Paris-Roubaix is definitely a race I hope to come back to. It was a great experience to win the race as a junior so I have good memories about the cobbles and I wish to be back there in the future. It’s one of the races I dream of winning someday. The U23 Ronde is a race I’ll do next year; this year I was close to being in the final so next year I’m there to try and win the race. I love the area and the parcours is very good to me. So that’s a race I’m already thinking about. 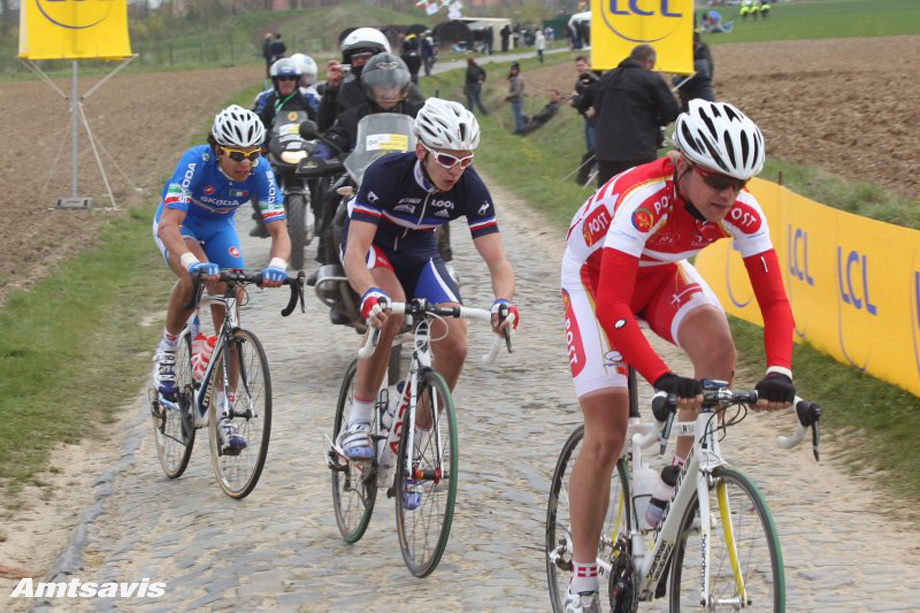 PEZ: Your TT win in the Denmark Tour must have stimulated interest with the big teams – and your L’Avenir stage win definitely must have had the phone ringing?
Both wins opened the eyes of the pro teams. Both wins were amazing victories and they stand clear in my mind. To beat all the pros in Tour of Denmark was incredible but I believed in myself and I believed it was possible. My legs felt really good and I couldn’t feel the previous stages, so I just went out there and gave it all from the start. The Tour de L’Avenir win was amazing; I had that fourth stage in my mind from the start, so to mark that stage as my stage before the race and then go out there and do it is something I’m really proud of. But how much the phone rang I don’t know – you have to ask my agent!

PEZ: Can you tell us who made offers after the Worlds?
I won’t tell which teams made me offers. I can just tell I had offers from both the WorldTour and ProContinental teams. 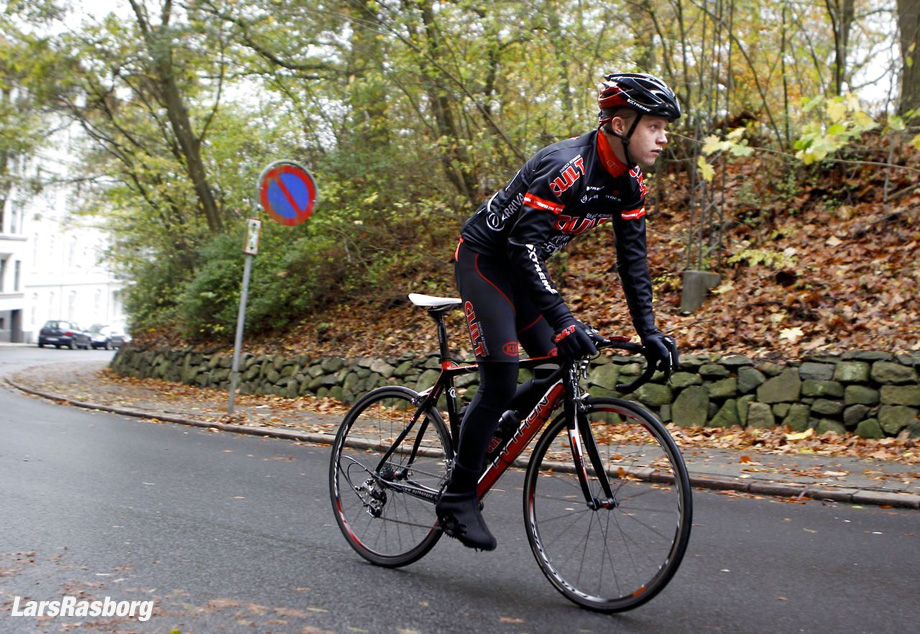 PEZ: Why wait to go WorldTour?
I want it to be right when I go to the World Tour. I don’t see why I should sign a quick deal after I won the Worlds. There’s no reason to rush things if it isn’t possible to get the right contract then I’d rather wait. For me I think it’s good to wait anyway. I have a year where I can keep developing my success and win some more races before going to the World Tour.

PEZ: What do you want from 2016?
I want to win more races. I want to keep developing like this year and then I want to show myself well to join the World Tour.

PEZ: And if you could win just ONE race, it would be?
I have many dreams but now I have the World ITT title in Junior and U23, I have to finish the streak and be the first ever to win in Junior, U23 and Pro. 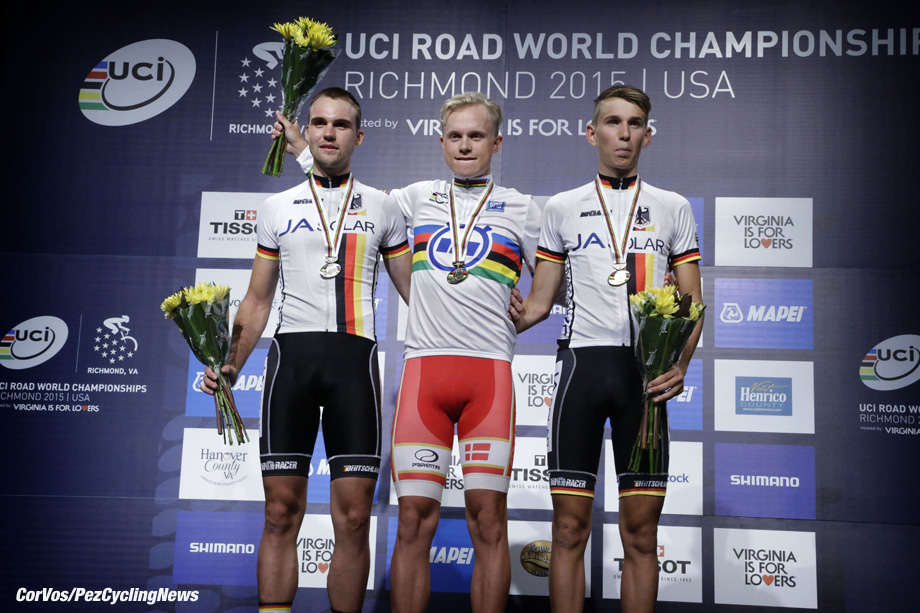