Scotland doesn’t get too many world cycling champions – so when John Paul won the World junior sprint championship, it was something special. ‘Juniors?’ I hear you say – the team pursuit was won by Australia with a 4:02 and the man Paul beat in the sprint semis, Max Niederlag of Germany did 9.899 in qualifying. Those are seriously quick times. Paul also won the European junior sprint and keirin titles in Portugal just one month prior to the Worlds.

We recently caught up with the man originally from way up there in Lybster, Caithness in the far north east of Scotland.

PEZ: Congratulations, great ride – but Niederlag 9.899 in qualifying, a big mental hurdle for you from the off?
John Paul: Absolutely – when I saw it at first I was apprehensive; but I’d beaten him in the European Champs in Portugal so I knew we were at a similar level.

His 100 metre time was the same as mine, but he didn’t die in the second 100 – when it came to acceleration I knew I could beat him.

In the semi it was one each, but in the third race it was a drag race to the line, shoulder to shoulder – he flicked me and was disqualified; it’s maybe not the way I would have wanted to win but the rules are the rules.

PEZ: Is the Moscow track as fast as we’ve heard?
JP: It’s something else!

The transitions are very fast – it’s a much faster track than Manchester. 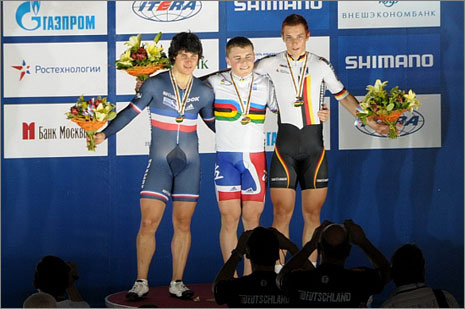 PEZ: At the Europeans you won the keirin, too.
JP: I had a chance to rest a little between the sprint and keirin in Portugal but in Moscow the keirin was the day after the sprint – I was late after the sprint, with the podium ceremony and the doping control, and maybe a little tired.

In the keirin there are more variables, more guys on the track – a US guy flicked me in the semis and that was that; whilst the Mexican rider (Verdugo) who won bronze in the keirin didn’t even qualify for the sprint.

PEZ: Keirin/sprint/team sprint, which do you prefer?
JP: I like the keirin but I prefer the sprint because it’s one on one – pure tactics, it’s down to you; in the keirin if someone swings up on you . . .

PEZ: You qualified with 10.175 and your GB team mate Matthew Rotherham rode 10.228, isn’t that a good base for a team sprint squad?
JP: Our man three quit the sport; and the guy who is replacing him isn’t quite fast enough, yet.

I’d love to ride it, but you need three guys at the level.

PEZ: You must be knocking on the door for the senior team sprint?
JP: I’m not really sure, I’ll be man one in my club team, the City of Edinburgh at the British Track Championships.

Hopefully I’ll be with the British cycling Academy by then – I’ve finished with the Olympic development Programme and am waiting to see if I’m accepted for the Academy.

The thing is that the team sprint programme is really competitive; I think there are 10 or 11 guys after three places.

PEZ: Were you living up in Lybster when you got into the bike?
JP: No, I was into athletics, football, rugby – it wasn’t until we moved down to Oxfordshire that I got into cycling.

The football and athletics were a lot more competitive in England than they were in the north of Scotland – and then I saw the Olympics on the track and started to ride at Reading track.

PEZ: Why track, didn’t you want to be like Tom Boonen or Cav?
JP: I was really inspired by seeing the track racing with Chris Hoy at the Olympics.

And then when I rode the track, with the bankings, the G force, the sense of speed, I was just hooked – I loved it, such a rush. 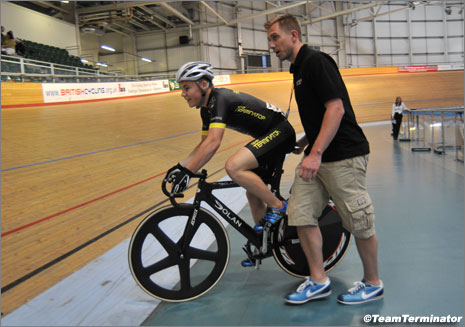 PEZ: Tell us about your training.
JP: In the winter for two or three months I build a good, solid base, including road work – you have to so as you can deal with the volume of racing at championships.

I do gym work all year and big gear stuff on the turbo; and of course I ride the track.

Reading is my home track but I ride at Newport a lot, that’s about an hour-and-a-quarter’s drive – Manchester is double that.

PEZ: Who’s your role model?
JP: Chris Hoy, he’s my main inspiration, watching him in action at the Olympics was what motivated me to get into track racing.

Craig McLean has been a big help to me, he gives me a lot of advice; Jason Kenny and Ross Edgar too – they all give me tips and advice.

PEZ: Are you an equipment man – or do you just ride what’s given to you?
JP: I’m always looking at bikes and thinking about what I see on them.

At our level we don’t get the GB ‘Superbikes,’ we ride Dolans – Niederlag was on one of the German FES team bikes, so it’s a psychological edge for me that I can beat him on a normal track bike.

At the Euros we were pretty ‘hands-on’ with the bikes, we had a big squad so had to change our own gears between events.

PEZ: You’re supported by the Braveheart Fund which helps Scottish riders, financially.
JP: Yes, it’s been a big help, I have a lot of travel expenses and it’s difficult to find funding so any help is great.

PEZ: The Worlds were your goal for 2011 – so you can tick that one off.
JP: Absolutely! Next year I’m looking to build on 2011, firstly I hope to be accepted for the GB Cycling Academy, then put in a solid winter, try to improve and target the U23 European Championships for 2012.

***
With thanks to Brian Smith of Braveheart for arranging this interview.