It’s ironic that 2009 was Kenny Van Hummel’s best ever opening to a season – five solid wins, including a stage at the Four Days of Dunkirk and runner up slots in the Netherlands Elite Road Champs and Scheldeprijs. Ironic, because most folks remember him for being at the other end of the bunch – fighting daily to make the time cut as le Tour’s ‘lanterne rouge.’ PEZ caught up with Kenny the day before he took to the winter boards for the Rotterdam Six. 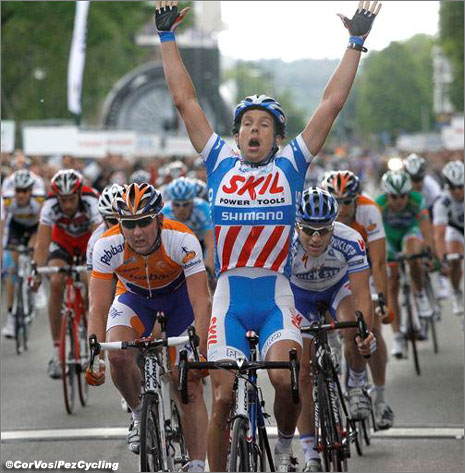 PEZ: I remember after each stage, thinking; ‘how’s Kenny?’
Kenny: The whole of Holland was thinking that too! I suffered a lot during the Tour, but the things that were being said about me made me very determined. They said that I wouldn’t see the end of the first week – and then it was the second week. When I made the second rest day, I said to the team; “OK, we’re going to the finish in Paris!” 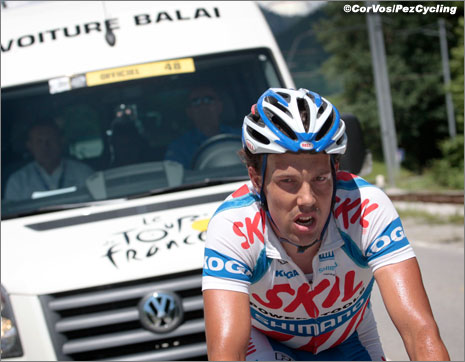 Ok, we’re going to the finish in Paris!

When I’m angry and have a goal, I don’t give up easily! But then I had that stupid crash where I cut my knee very badly. It was still hurting me in November and the team doctor said that I had to get a couple of injections to clear it up. We had to tell the UCI what we were doing; because of what was in the injections, I couldn’t take them during the season, unless I had three weeks out of racing.

PEZ: Do you love or hate the Tour?
Kenny: Oh! I love it! There was a lot of suffering, but it was a childhood dream – I used to watch the Tour with my dad. It’s the biggest bike race in the world and I was just so happy to start the race with my Skil-Shimano team. It was important to suffer, and to try to finish – it’s a big dream, it’s beautiful! 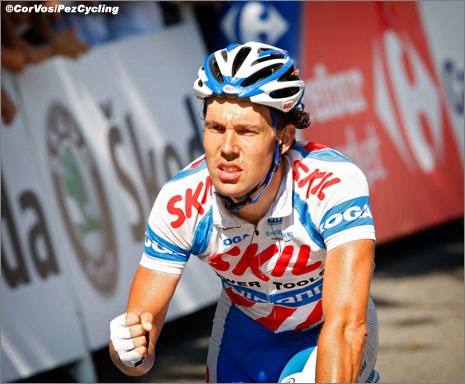 Kenny celebrates another time cut made at the Tour de France.

PEZ: Did your level of recognition with the public go up a lot as a result of the Tour?
Kenny: A lot of people recognise me – it was big hype in Holland. Every day, after the stage, the press waited for me and I always spoke to them – but I would always just be myself in the interviews, always the same. I think that the public respected that.

PEZ: The Tour must be tough for you as a sprinter, without a ‘train.’
Kenny: It wasn’t possible to sprint against Cavendish, man to man – only Tyler Farrar could get on terms with him, because he had a train organised. And Hushovd too, of course. 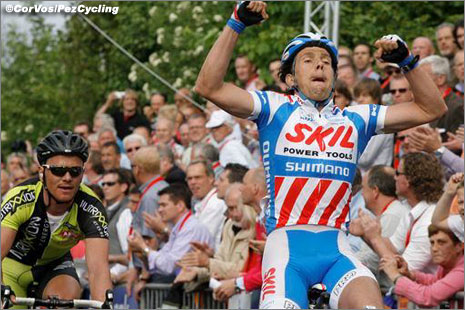 With a some more support and experience, there’s no reason to believe that Kenny won’t be doing the above in a few years time at the Tour de France.

I was in the Tour for experience, so I didn’t have a team there for me – our guys were more breakaway riders and climbers. I need to get guys with me who I can build up an understanding with in the finishes. 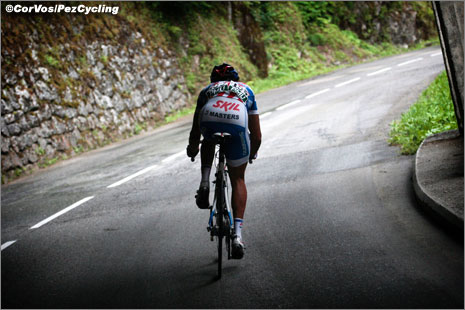 Kenny had a quiet, lonely trip through the Tour de France’s mountains.

PEZ: Did riding most of the Tour make you a stronger rider?
Kenny: Much stronger; after my winter break, this year, I found that I got back into shape much quicker, I took big steps in just a few weeks. In the seasons before I rode the Tour, it was much harder for me to get back to form. 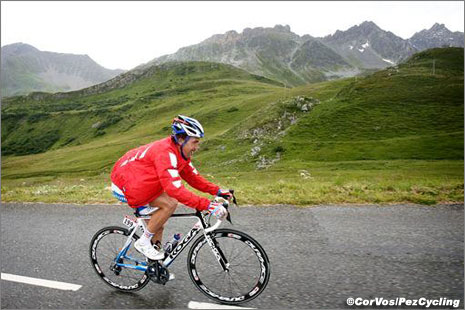 No questions – Kenny is a better rider for making it as far as he did at the Tour.

PEZ: You were a good cyclo-cross rider when you were young; fourth in the junior worlds.
Kenny: Yes, I did it with Rabobank as alternative winter training. But when I was a third year amateur, the Federation decided not to send me to the cross Worlds; I got angry about that and turned to the track. I get invites to ride the sixes, but I only ride the ones in The Netherlands – Amsterdam and Rotterdam. 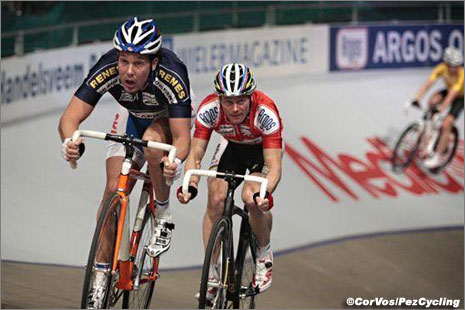 Kenny is at home on the boards in Holland.

PEZ: When did you realise you were fast?
Kenny: I began racing at seven and by the time I was eight, I knew that I was pretty fast and could win sprints. My dad used to say to me though, that I shouldn’t just sit in, I should attack, make my self stronger – but I knew that if it came to the finish, I’d be fastest! 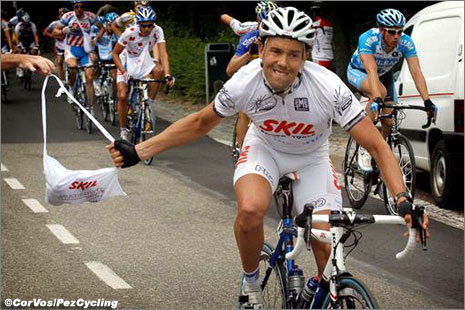 Van Hummel led the European Continental standings for a solid chunk of the season.

PEZ: Did you win much after the Tour?
Kenny: After the Tour, I won one small race, but I had a lot of problems with my knee, I missed three weeks, I couldn’t train and lost a lot of muscle.

PEZ: How was Curaзao?
Kenny: Nice, very nice. Leo Van Vliet contacted me and asked me if I wanted to go – it was just around the time that I was looking for a vacation, so it was perfect. When I was out there, I won a 60 kilometre crit, that was nice, too. 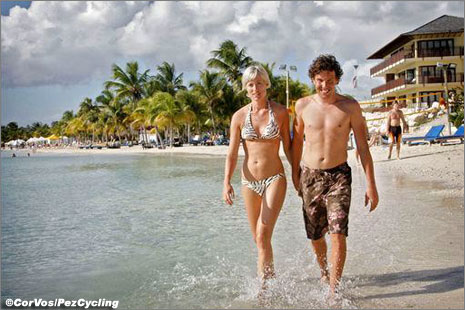 Curacao? It was ‘nice, very nice.’

PEZ: How’s the weather been for training in The Netherlands?
Kenny: The weather has been bad, a lot of snow, but I’m in area where there are a lot of dykes – they always keep the roads along the tops clear and I do 120 kilometre runs along them. If it’s really bad, I go out on the mountain bike for five hours. I have good motivation; a lot to prove to the fans in Holland. I don’t want people just to recognise me for being last in the Tour. I want to improve, do my best – it’s important to me!

PEZ: You were second in the Nationals – a big goal for 2010?
Kenny: It’s always a big goal for me. This year, it’s in Limburg, that’s a little bit hilly, but for the National Championships you can always do a little more – it’s not a stage race, just one day and you can find that little extra. 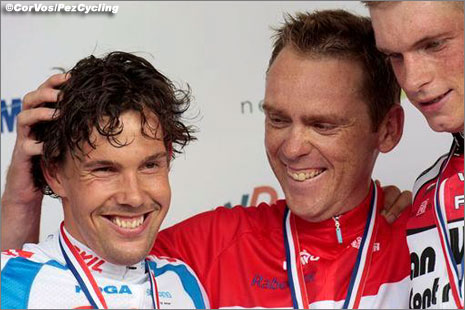 Second at the Dutch Championships in 2009, Kenny hopes to move a step higher in 2010.

PEZ: Le Tour starts in Rotterdam in 2010?
Kenny: Of course; it’s very important for Skil-Shimano to get a wild card for Le Tour. And them I have to work very hard to make the Tour team. I know Rotterdam, it’s a nice city, I won The Netherlands championships for Elites without contract there, a few years ago – it would be good to go we’ll there, again! 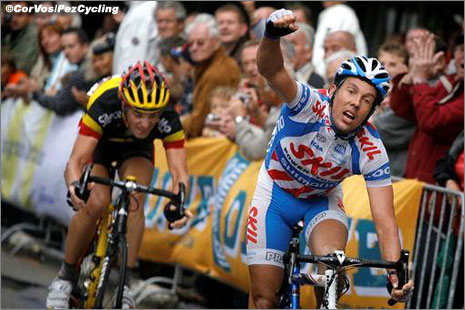 Expect many more wins from Mr. Van Hummel in 2010 and beyond.

***
There are bigger teams than Skil-Shimano, but none more sympatico; we wish Kenny and his team all the best for 2010 – let’s hope they get that wild card.