Ribble Interview: You expect to see innovation from the ‘big’ frame builders, but leading the way with their ‘Ultra SL R’ from their HQ in Preston, in the north of England is Ribble Cycles. Ed Hood caught up with Andy Smallwood and Jamie Burrows to talk bikes – Aero bikes. 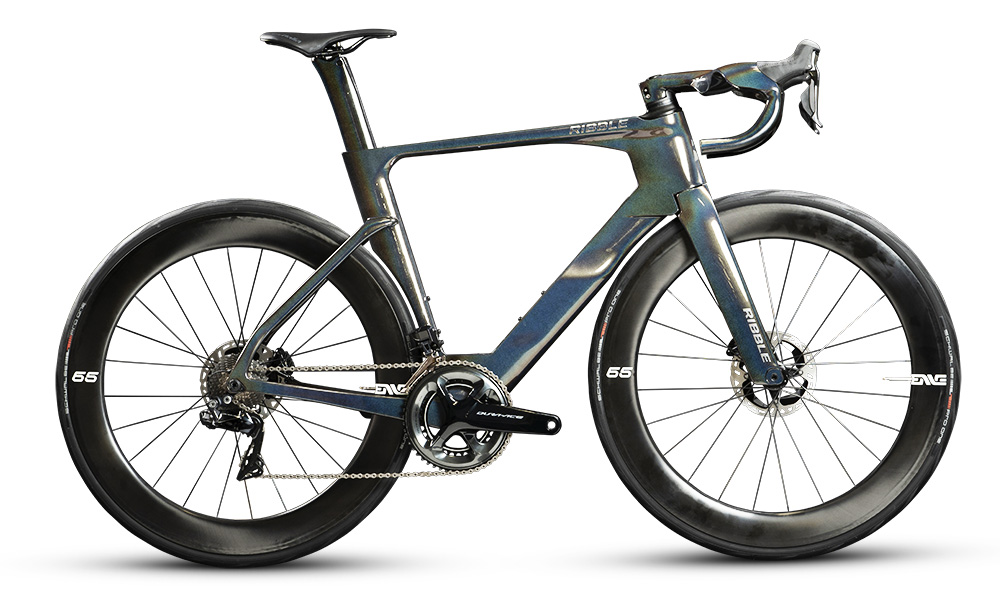 The folks at Ribble are calling it the, ‘Bat Bike’ but I think Manolo Saiz at ONCE with his LOOK contrarreloj specials laid claim to that title ‘back in the day?’ That said the Ribble ‘Ultra Aero’ is a beautiful piece of machinery and in the manner of the best British speed machines – Aston Martin, Jaguar, Lotus, Norton – pulls off that trick of looking very quick even when it’s standing still. We recently featured the machine on our ‘Gear Break’ feature but decided we needed to know more about this striking steed. We caught up with Ribble CEO, Andy Smallwood and ex-pro and DS, Jamie Burrow, Ribble’s head of product development; here’s what they had to say:

PEZ: Andy, cynics might say that ‘aero’ on a road bike is irrelevant given that the air is so churned up in a peloton?
Andy Smallwood: When so much of a cyclist’s effort goes into moving through the air, aero is very relevant on a road bike. Whilst the aero benefit of an aero road bike is reduced in the middle of a peloton there is still a benefit and over multiple hours this will translate into valuable energy saved. What we really need to consider is the significant aero benefit the design of the bike offers when not riding in a peloton, whether that’s the pro rider who will need to be either at the front or off the front of the peloton to win a race or the enthusiast rider who is likely to spend most of their time not in a group big enough to negate the aero benefit and will be either riding solo or in a small group taking their turn on the front driving the pace. It’s at the crucial time in a race when fully in the wind combined with the culmination of energy saved over the duration of a race where the pro will see the benefit of aero. The same benefit is intensified for the enthusiast rider who will be spending far more of their riding time directly in the wind. The aero benefit equates to more speed for the same effort or the same speed for less effort, either way it’s a win, win. 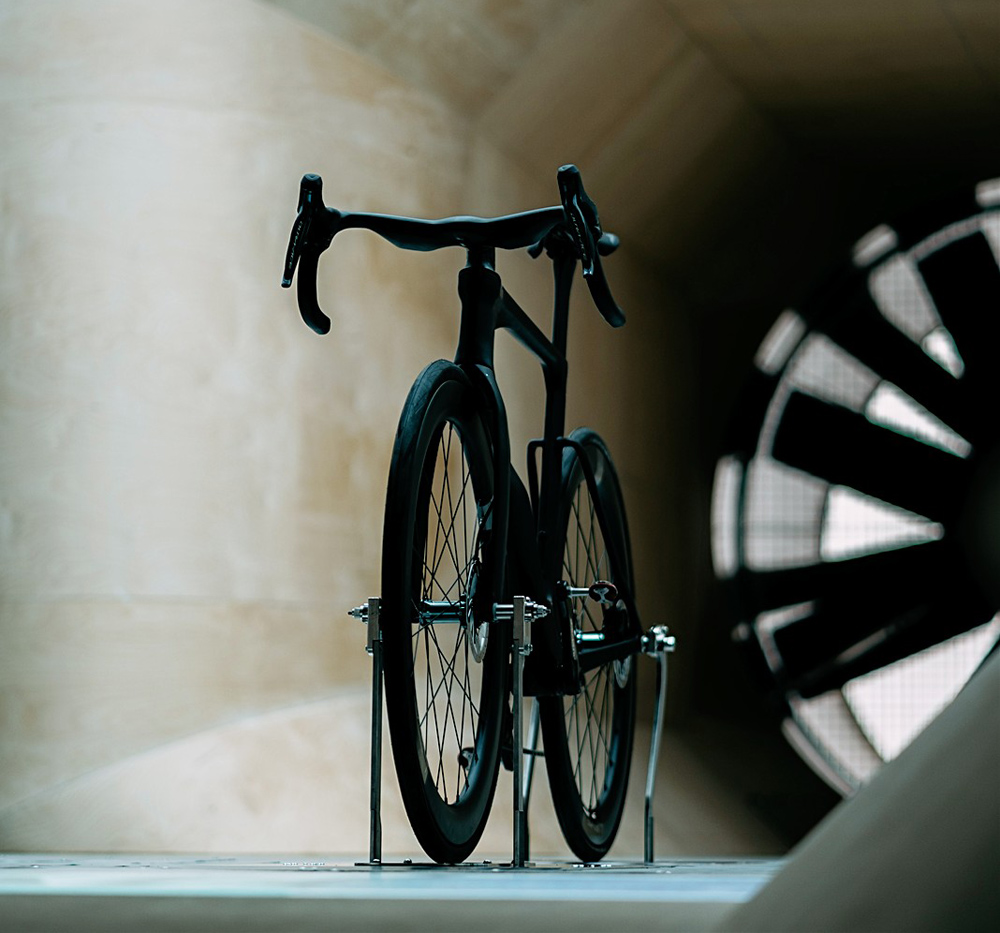 PEZ: Tell us about how you tested the machine and rider together – as it should be – but given the variation in body types/sizes?
The design of a bike can react very differently when tested on its own vs. with the rider; after-all a bike doesn’t ride itself! A bike that tests very well on its own due to having very clean airflow over it can lose most or even all of that benefit when tested with the rider, if that clean airflow over the bike hits the rider in a negative way. Therefore, we always test from initial concept with the rider, at CFD [computational fluid dynamics] level we have a full digital scan of our test rider, who we also use in the wind tunnel for complete consistency. Because of the variation in rider sizes and position and how they interact differently with both the airflow over the bike and overall, we test with multiple riders, male and female in the wind tunnel and in real world testing to ensure that we account for this variation. 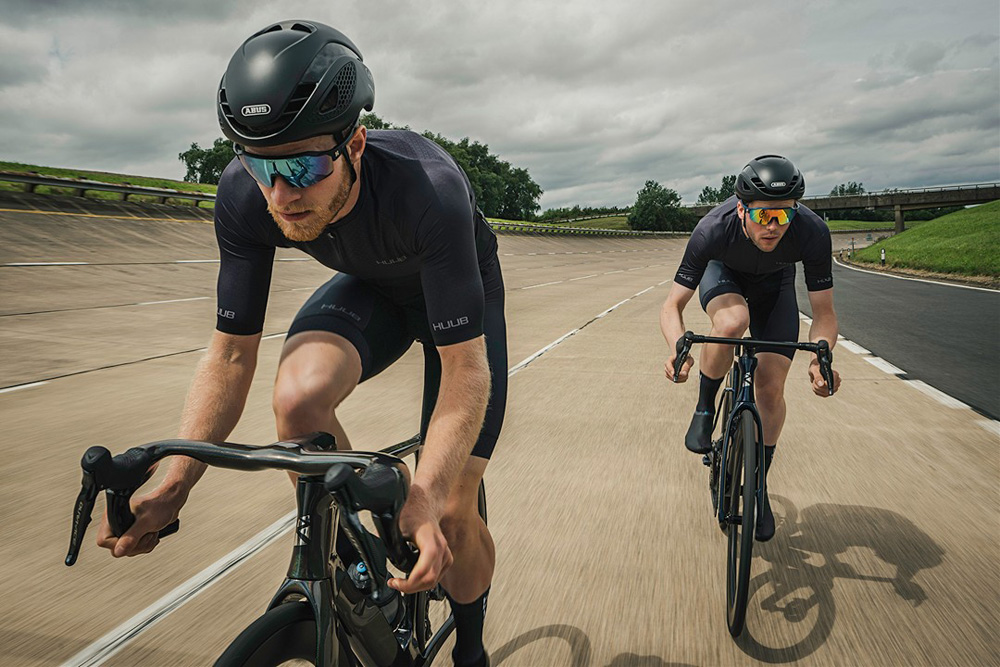 Real world testing took place on all terrains and topologies

PEZ: Tell us about the road testing.
Our road testing consists of two main stages, one is general road miles, living with the bike, seeing how it feels, handles, reacts to various situations, terrains and types of course, this is as much ergonomic as it is aero analysis. This can take months and in the new Ultra road testing was carried out for over a year and thousands of miles with multiple riders. The other stage is aero comparison testing between the bench-mark and the new bike. This is as controlled as possible using the same rider for back to back tests, this is also carried out using a different size and shape rider to the wind tunnel testing to further average out variation, ensuring specification, wheels, tyres and bike fit is identical between both bikes as well as temperature, wind direction and speed, air pressure and even time of day and where the rider is in their training schedule to eliminate fatigue having an impact on the result. Different courses and efforts are used, from longer 1.5 hour threshold efforts over a hilly technical course, medium VO2 type 15 minute efforts over a rolling circuit and short two/three minute anaerobic efforts again over an undulating course. This gives us a good understanding of the performance gains in different scenarios which we can then assess vs the wind tunnel analysis. In the case of the new Ultra there was only 0.04% variation between the average of the real-world testing and the wind tunnel which was very reassuring.

PEZ: Has the Ribble team raced on them yet and what’s the feedback?
The team haven’t raced on the bike yet but will be soon. They have ridden prototypes and the feedback has been exceptionally good.

PEZ: Tell us about liaison with the UCi.
The bike has been designed to conform to the UCI regulations and given its aero intentions does go quite close to some of the required dimensions so has resulted in some more detailed discussion. 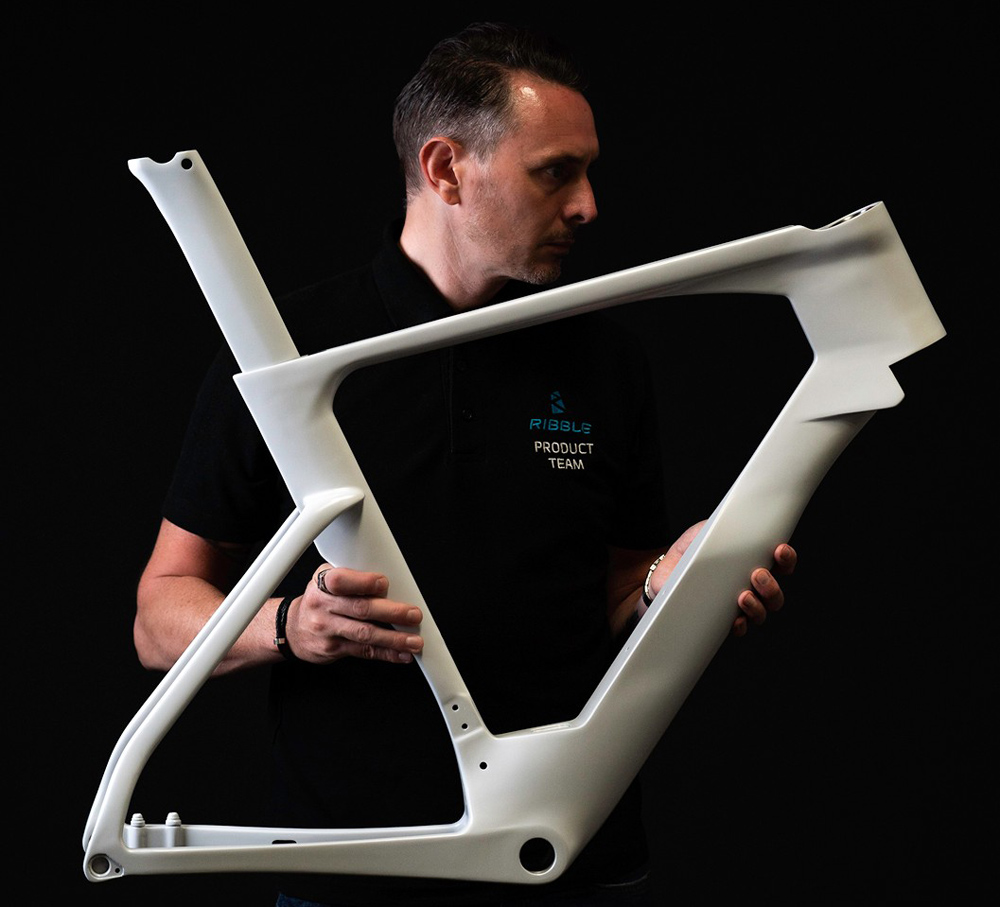 Rapid Prototyping was used in the modelling of the Ultra Road

Jamie Burrows knows his bikes; as a former Plateau de Beille ‘recordman’, world u23 UCi number one ranked rider and professional; not to mention a sport director at the highest levels of the sport.

PEZ: What was your starting point, Jamie?
Jamie Burrows
A simple design brief: to be the fastest aero road bike in the world. Not just designed to be the fastest when tested in isolation, but the fastest in the real world. We started with a visual concept and tube profile shape ideas and then used CFD [computational fluid dynamics] to modify each one of those tube sections into the perfect aerodynamic shape for the task. 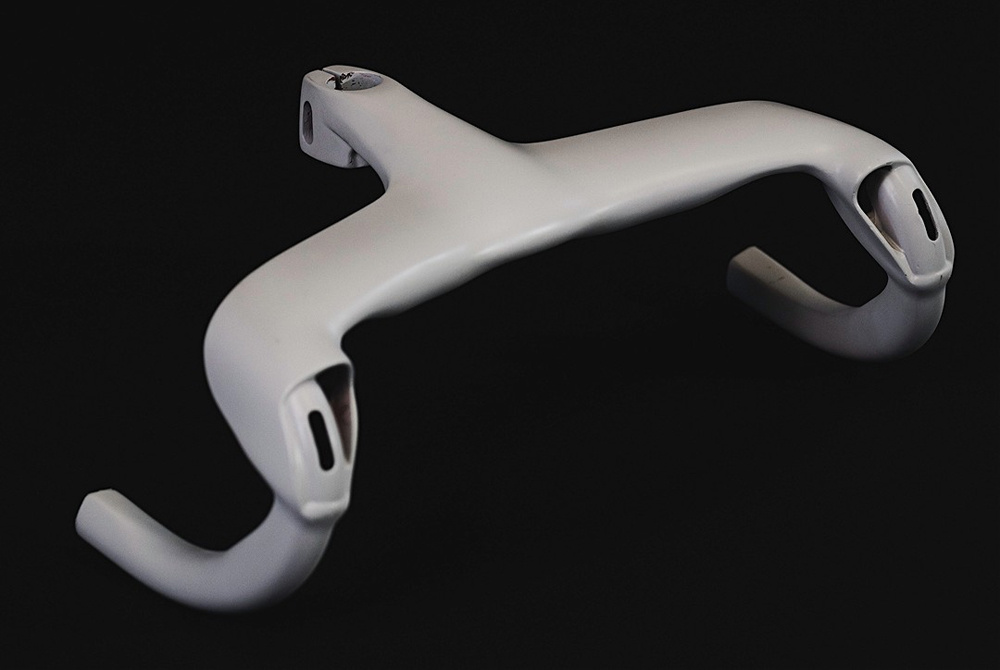 PEZ: Tell us about the direct mount brake levers, that’s new.
Handlebar design was very critical to the overall project as it’s the first part of the bike to interact with the airflow. We have always been limited to how far we can take handlebar design due to the obligation of fitting brake/gear shifters using a round metal band. By eliminating the need for this band we had freedom to re-design the handlebar for both aerodynamic and ergonomic needs. This is how we came up with the direct mount lever system. 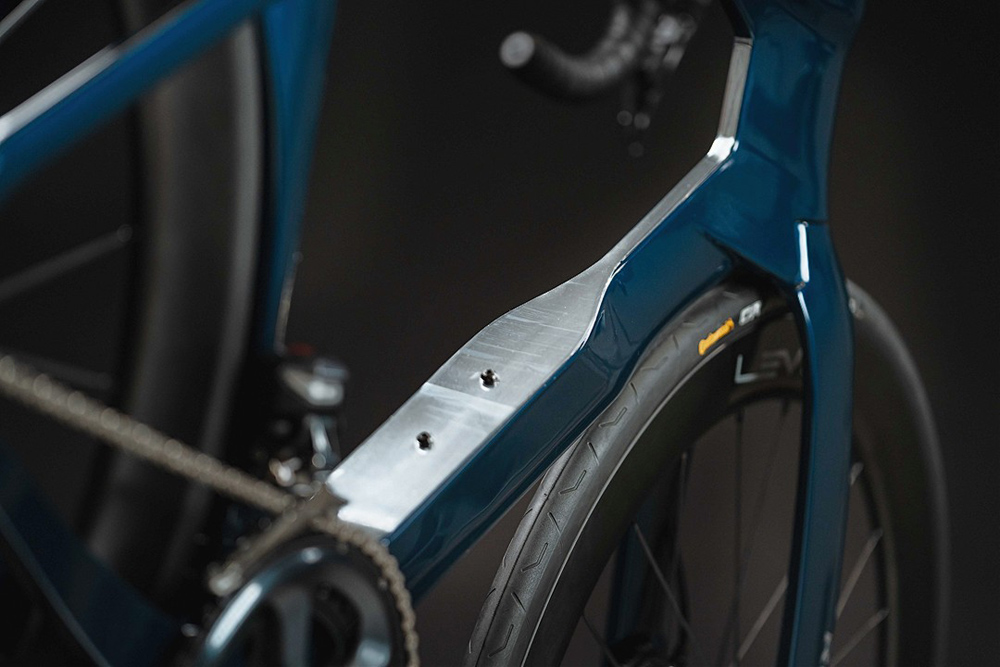 A flat downtime works in the wind tunnel

PEZ: Tell us about that ‘rad’ down tube please.
The down tube is effectively split into two sections. The upper narrow section is all about the perfect aerodynamic transition between fork crown, head tube and down tube. The wider truncated lower section has been designed to interact with a standard size and shape water bottle as well offer torsional stiffness in the interaction between down tube and bottom bracket area, which is critical for optimal power transfer through the pedals.

PEZ: You claim it’s more efficient with a standard bottle – I thought a ‘cylinder’ was the worst shape for aero?
It’s all to do with the truncated down tube profile and size which was designed to interact with the bottle. The bike actually tests faster with the water bottle fitted, across the full YAW sweep. This was key to the design process of the bike performing in real world conditions as a water bottle will always be used. 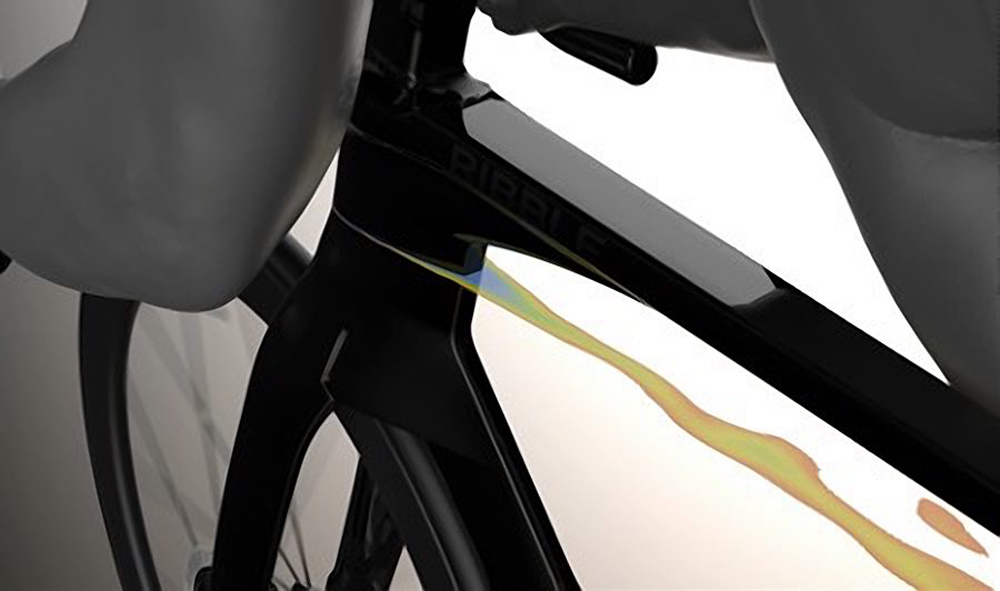 PEZ: Disc brakes – aren’t they less aero efficient?
No, we are a lot more limited on fork design and seat/chain stay profiles with the requirement to fit a brake calliper. The front fork design features what we call outboard fork blades, which sit further away from the wheel. This would not be possible if we also had to integrate a rim brake calliper.

PEZ: How has the move to fatter rubber been factored in?
The bike will take 32mm tyres but the design was optimised around 28mm tyres with wider rims. Again the non-requirement of brake callipers makes this far easier to achieve optimal results. 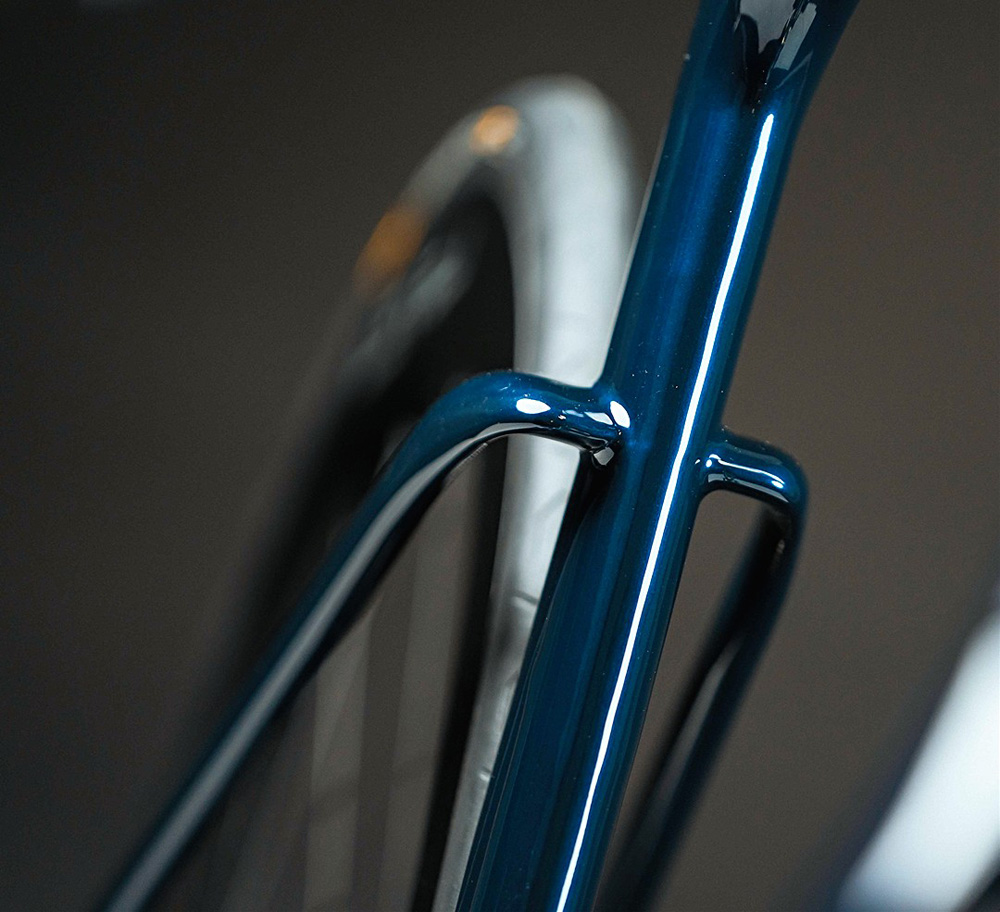 The wide stays on the Ultra-SL Pro

PEZ: Tell us about those wide forks and that wide rear ‘yoke’ where the seat stays meet the seat tube.
Investigation of the fork blades and how their position affects airflow led us to experiment with three separate fork blade positions. We needed to understand the impact of moving the fork blades inboard and outboard from alignment with the front wheel axle. An extreme outboard design realised more aero gain at 0° of YAW, whereby the forks created a wake for the rider’s foot and leg to sit within. However this advantage was soon lost beyond even 3 degrees of YAW. The final design performed consistently better above 5 degrees of YAW and aligned to real world riding conditions. The seat stays sit exactly in line with the forks, visually hidden from the front view of the bike. 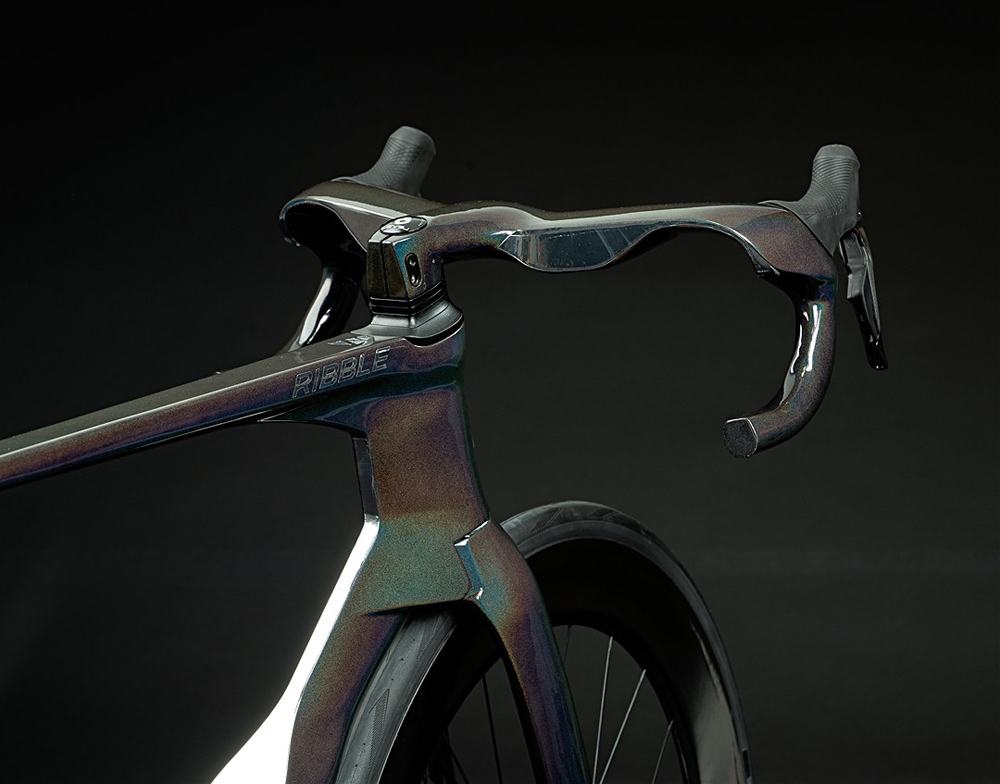 Handlebar detail on the Ultra Road

PEZ: Where do bikes go from here?
That’s a big question and one we are always looking at. For us at Ribble it’s about using our experience and research and development on projects like this high end race bike, across all categories of bike. However, do watch this space! 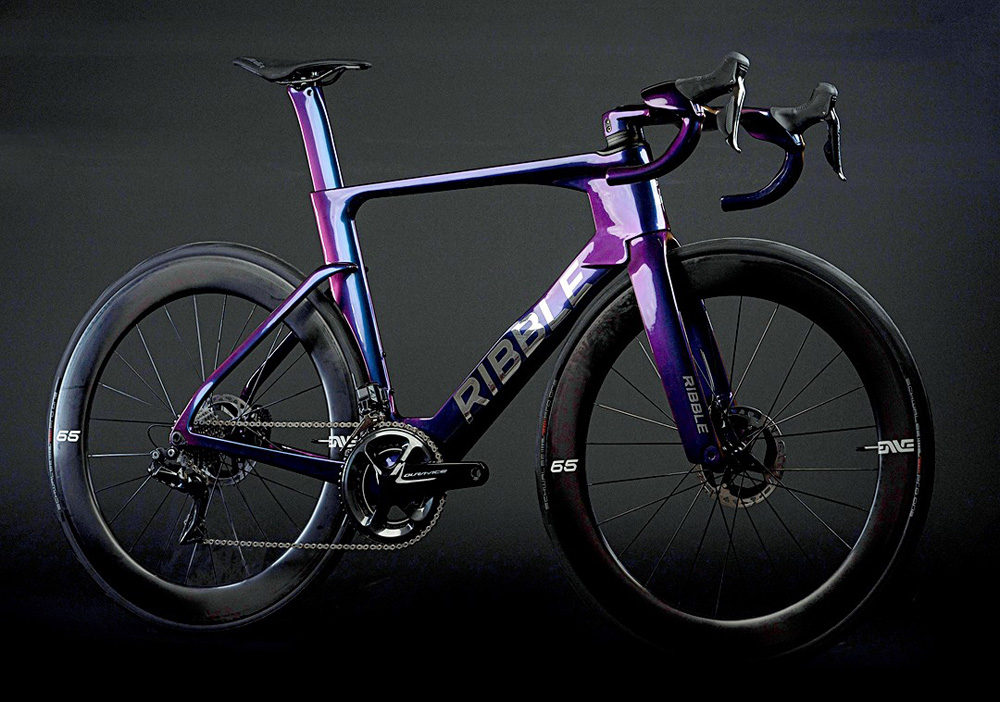