There were some great rides in the World Elite time trial championships; the trouble was that Fabian’s towering performance over shadowed everything. Take the man in 11th spot – Dave McCann of Ireland, no sponsor, no state of the art bike but a solid performance that saw him in the ‘hot seat’ area for a large part of that sunny afternoon in Mendrisio.

But that’s only part of the story; he was third in the Chrono Champenois just two weeks previously and on the Sunday morning before the Worlds, he broke Chris Boardman’s 16 year-old British 25 mile (40 kilometres) record of 45:57 by three seconds. That year – 1993 – saw Boardman break the world hour record as well as win the GP Eddy Merckx and Chrono des Herbiers pro time trials.

We caught up with 36 year-old Dave at home in Ireland a week after the Worlds and just after his return from a five day Irish team pursuit squad training camp at Aigle, in Switzerland. 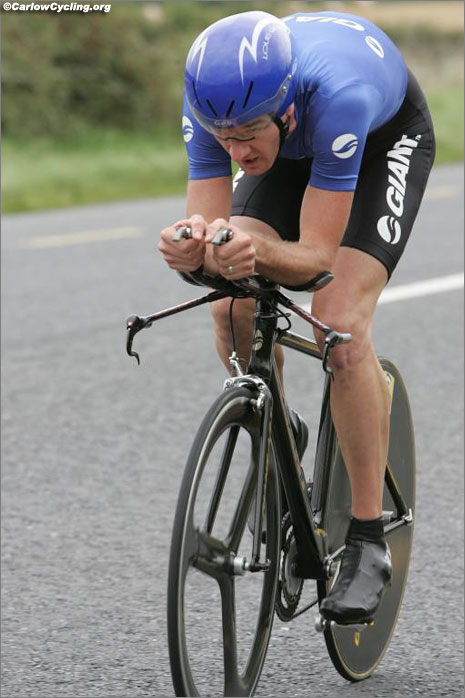 PEZ: Who are you riding for this year, Dave?
Dave: My Irish club – Phoenix CC! I signed with an Australian team, Ridesport at the beginning of the year and everything looked good; but we only did one race with them – a stage race in Malaysia – then it folded, a victim of the recession, I guess.

PEZ: You seem to be getting faster as you get older!
Dave: Definitely, at the Worlds that was 400 watts for one hour and one minute – that’s the most I’ve ever done. The good thing now is that a lot of guys are getting slower as the drug tests get better!

I do a lot of wattage calculations and apart from the first two (Cancellara and Larsson) the others weren’t that far ahead of me.

I was a late starter and didn’t really get serious about cycling until I was 23; I raced before that but not seriously. When I was 23 I took what was supposed to be a six month sabbatical from work to cycle across the USA from Florida to California – but I never went back! 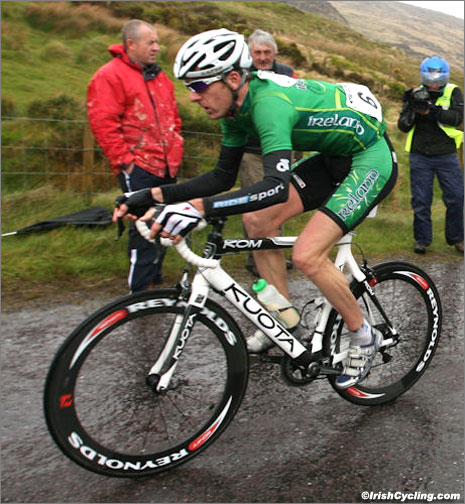 PEZ: Third in the Chrono Champenois, not a bad ride.
Dave: It was all part of my Worlds preparation; a good try out, shorter and more intense at 33 kilometres. I was going really well before the Worlds last year, but the Federation didn’t send me; so I wanted to a good ride, this year.

PEZ: South Wales is where you broke the British record, quite a trek from Northern Ireland.
Dave: I knew it was a fast course and when you’re building up to the Worlds you need decent competition and targets along the way. It was my last hard training session before the Worlds and I was a little tired – I don’t think I was quite at my best.

PEZ: Tell us about the course.
Dave: It’s on dual carriageway, the traffic count was light (British time trials are conducted on open roads) fast, safe and with a good start where you drop 100 metres in a mile. I’ve done a short 47 in Ireland, so I knew that a 45 was possible. It’s in a valley, so it’s sheltered from the wind, it was a nice day and it was good to see all those folks racing – there were 240 riders. It didn’t feel particularly quick, I have to say. 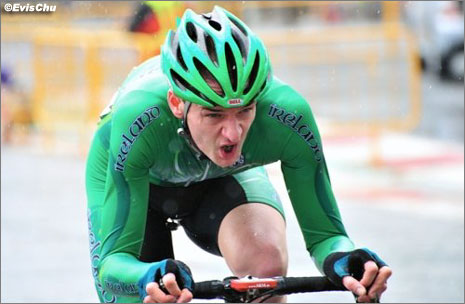 PEZ: Were you aware of how close to Boardman’s time?
Dave: I just presumed that I’d break it, after that short 47 in Ireland; I knew I was on a 45-something. I thought that Hutchinson (amateur, Michael Hutchinson, multiple British time trial champion) might go quicker than me, though.

PEZ: Were you getting checks on him?
Dave: No, I was just there on my own, I flew to Birmingham, the day before then hired a car and drove down – I had a nightmare getting a hire car that worked – then I flew out to the Switzerland and the Worlds after the race.

PEZ: Have you had a lot of media attention for the 25 record?
Dave: Not, not really, but I’ve been busy – it was straight to the team pursuit training camp at Aigle, after the Worlds. 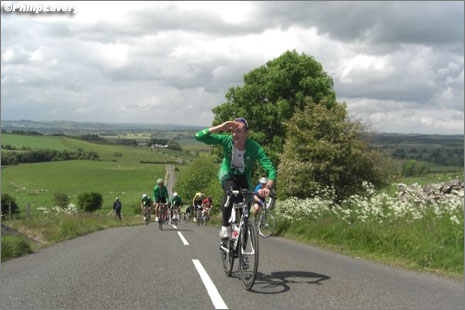 PEZ: Tell us about your time trial training.
Dave: This year has been different for me, usually I ride a lot of stage races – that’s my thing; 8/10 day stage races; I shine in those. But this year I’ve only ridden the one in Malaysia where I was 5th and the Ras (major stage race in Ireland) where I was 8th. Some years, I’ve had as much as 105 days of racing. I’ve spent a lot more time on the track this year with the team pursuit squad – short, sharp efforts at high cadence. Increasingly though, I’m not being a slave to a programme – I ride more on ‘feel’ now; I know my body better.

PEZ: The Worlds – how did you feel when Zirbel caught you?
Dave: It woke me up! I feel asleep during my second lap and when he caught me it jolted me out of my sleep; I was matching his speed and thinking; ‘why wasn’t I riding at this tempo, earlier?’ With hindsight, I should have gone out quicker and my second lap wasn’t great. I didn’t want to get into a ‘ding-dong’ with him on the flat, but I knew that if I was matching him on the flat, come the climb – were he’s giving me 17 kilos at his 88 kilos – I’d get clear – and that was how it was. A lot of the good guys go out really fast and just try to hold on – I’m a bit more conservative – but I should definitely have started faster. 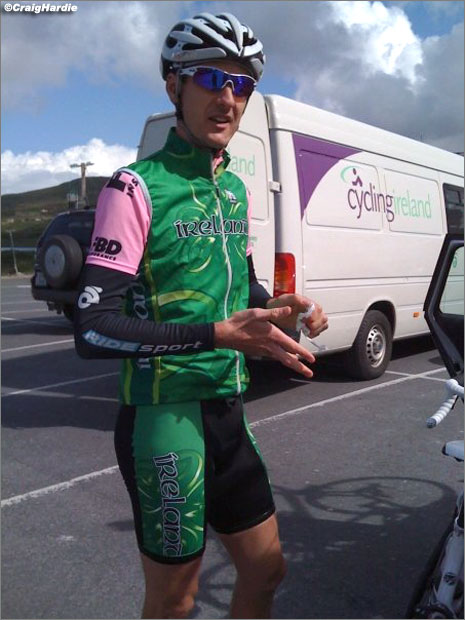 PEZ: Tell us about your bike.
Dave: It’s an old ONCE Giant, it weighs 10kilos; the UCI rules keep making it more difficult to get the position you want and it’s impossible to get hold of some of the equipment the top guys are riding – it’s frustrating. Maybe next year, if I get into a good team, I’ll get a new time trial bike! I rode a single 55 ring with an 11 to 25 – I kept the front changer on as a chain guard, though – and rode the 25 on the climb.

PEZ: Have you had invites as a result of your good rides?
Dave: I got an invite to ride the Chrono des Nations but it clashes with the Sun Tour in Australia – I need to show myself and get myself into a good road team for next year, so the Sun Tour is more important to me. 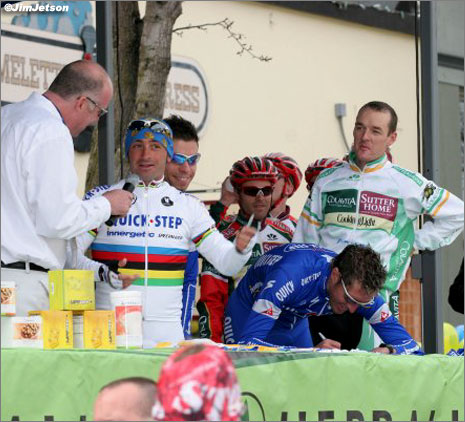 PEZ: Is track the main focus after that?
Dave: We have another team pursuit training camp, yes – but for me its part of the bigger picture; I like to ride road and track and can do that without problems. We have some very good young Irish riders coming upon the track; 18 year olds flung into it and going very well – it’s exciting.

PEZ: You rode for the Polish team CCC Mat in 2001 – that must have been an experience?
Dave: Ah, well, it was eye opening, shall we say! I didn’t belong there; I had been racing in Southern France and was rated highly – and it’s almost by default that you turn pro if you have a good amateur career. But we were racing in Italy a lot and it was unbelievably fast – Casagrande and Ulrich were prominent, then. I thought I was ill because I kept getting dropped; I came home for tests. I decided I’d ride the local club ten mile time trial – and broke the Irish record! There was nothing wrong with me; it was just that those races were crazy.

(A little after I’d finished speaking with Dave, I received this SMS; “Trying to find the right words as to why CCC wasn’t right for me. Simple answer – because I am clean!”) 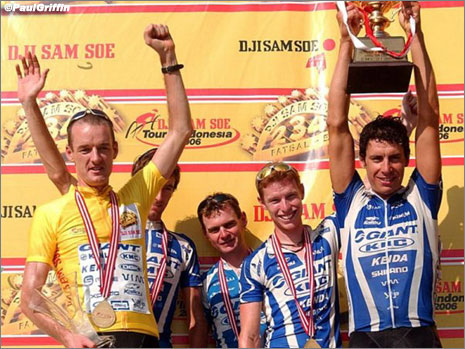 PEZ: London Olympics 2012?
Dave: I’d probably envisaged stopping before then, but if I keep on improving, I’ll keep going. I’ve been to two Olympics; it would be nice to make it three! What I do is that I think to myself; ‘have I anything better to do than ride a bike?’ Maybe one of these days something will come along – but it hasn’t yet!

***
With thanks to Dave for his time and wishing him all the best at the Sun Tour – and we hope he gets a shiny new time trial bike for 2010!

Travel: Classic Climbs Of The Alps