It’s ten years since Englishman Jamie Burrow was rated number one under 23 in the world; he signed with US Postal, but his pro career didn’t go the way he wanted and he spent seven frustrating years, ‘on the brink of something.’ But the 32 year-old is back, right at the top of a different aspect of the sport – Fondos. His win this year in this year’s Maratona delle Dolomiti was big news in Italia.

PEZ: Where’s home, Jamie?
Jamie: I lived in Sansepulcro in Tuscany for years but just recently I’ve moved around a bit, first Lucca, also in Tuscany, and now I’m in Rimini.

PEZ: Will you ever return to the UK?
Jamie: I can’t see it! I’ve been away too long; funnily enough my Italian girlfriend lived in England for ten years before we met – she would like to live in England, but we’ve been talking about going to Australia when I finish riding.

PEZ: US Postal 2000 and 2001 – tell us about it, please.
Jamie: It’s so long ago now; it didn’t go as it should – it was a case of me not knowing and picking the wrong team. It wasn’t a case of the team being too big – remember that it was at the start of the Armstrong era, he had only won his first Tour and they were buying riders to consolidate things so that he could win his second and prove it was no one-off. 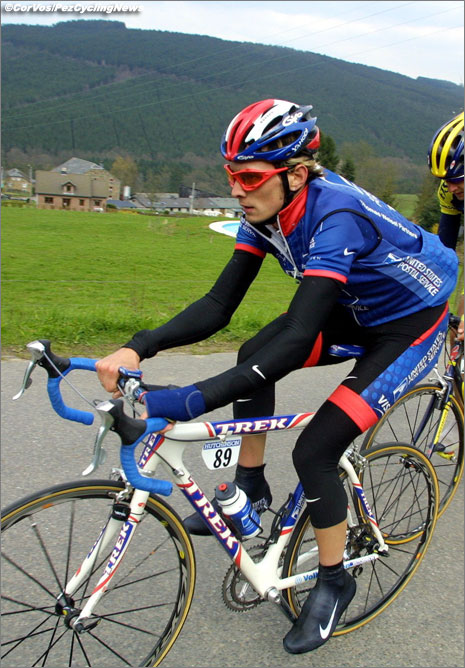 Jamie at Liege-Bastogne-Liege in 2001.

I think my career may have taken a different direction with another team. I rode the Route de Sud for them and finished fifth and eighth on the two mountain stages; I was best placed of the team – Lance and George Hincapie were the only two from the Tour team who weren’t there. 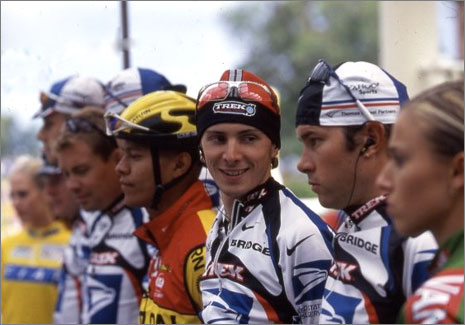 I think that with any other team that performance would have got me a Tour ride; but at Postal they wanted experience. Bruyneel’s attitude was; ‘you’re good for five days, but can you last me three weeks?’ Riders like Hamilton, Landis and McRae came aboard because Lance wanted them, but if someone else came along that was cheaper, they would get the ride.

PEZ: And Lance?
Jamie: I believe he’s changed now and is much more approachable; but he was very professional, back then. He was good at his job and he had a; ‘right! let’s get down to business!’ attitude. The team was there to do a job for him – if you weren’t an asset then you weren’t needed. 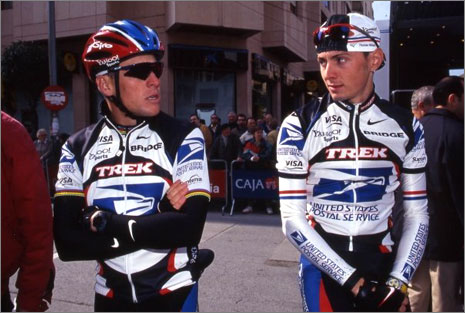 PEZ: Then four years at Amore & Vita.
Jamie: It was a big step down, but the problem at Postal was that I just didn’t get the racing; I only rode 23 or 24 races in my second season with them – you can’t show yourself if you’re sitting at home! I did four years of racing with Amore on a programme that didn’t suit me – there weren’t races that I could target and you end up trying to be good all the time. 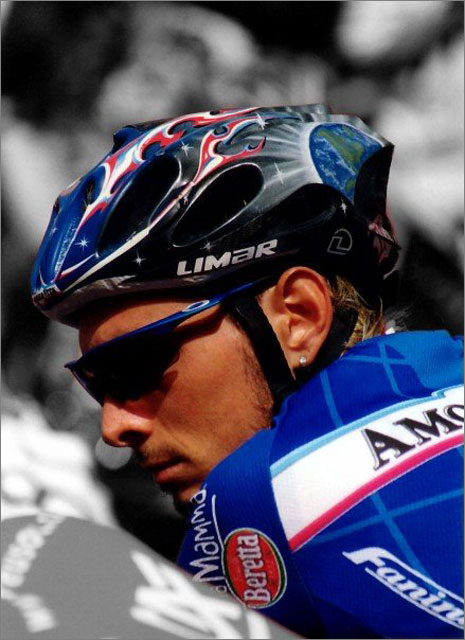 There are a lot of one day races in Italy, but apart from Tirreno and The Giro there aren’t that many stage races, it’s mostly one day events and those stage races that there are, don’t generally go into the mountains. It’s not like France, where you could target the Dauphine, for example.

PEZ: You had a good season in 2006 with OTC Doors.
Jamie: Yes, I rode a good Brixia Tour – which does go into the mountains – with top ten stage placings; but I’d already decided that if I couldn’t get back into a big team for 2007 then I would call it a day. 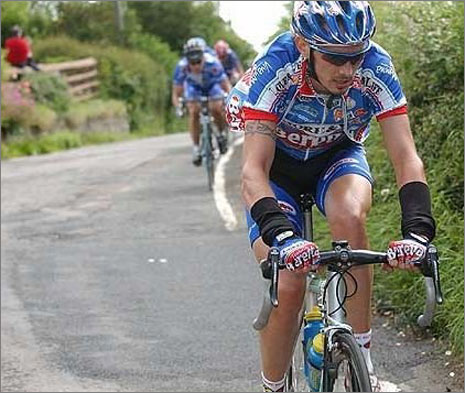 I should really have started afresh in another country, the thing in Italy is that Giro and Tirreno apart there’s no difference between the programme that the smallest Continental team rides and the programme the biggest Pro Continental team does. I could have continued to ride as a pro but decided that I was going in to business when I didn’t get a ride with a big team.

PEZ: Did you ever consider racing as a pro in the UK?
Jamie: If I’d been desperate to continue racing at all costs then I might have considered it; but I’d already decided to go into business by then.

PEZ: I believe you were close to signing with CSC and QuickStep?
Jamie: I had bad luck – I was on the CSC camps, had all my gear and the bike. But the team was tight on budget –they didn’t get another sponsor on board until the Tour – and one rider had to go. Riis wanted me to stay, but apparently at Board level the decision had to be unanimous and one guy out of ten voted against keeping me. Rolf Sorensen used to look after me and he rang me up one day, when I was out training and said; ‘it’s 90% you’ll be with QuickStep on Friday.’ 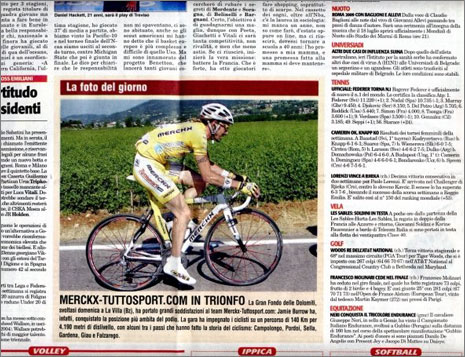 I didn’t even know that he was talking to them – I was thinking; ‘why bother to call if it’s not final?’ It would have been better not to tell me until it was signed – in the event a Dutch guy who knew one of the DS’s got the ride. When you ride for a small team, you have enough to live on, but you can’t put anything away for the future – it’s different for a lot of the Italian guys, they can ride on minimum wage until they are 38 or 39 then go straight into the family business.

PEZ: Most satisfying performances?
Jamie: As an amateur, 1999 – that was when I set the record for the Plateau de Beille climb; everything went right that year. Usually there are always things going wrong, injuries and the like – but 1999, everything went so smoothly. As a pro, I suppose it would be my time at Postal – that’s what I’ll look back at in 20 years, I guess. 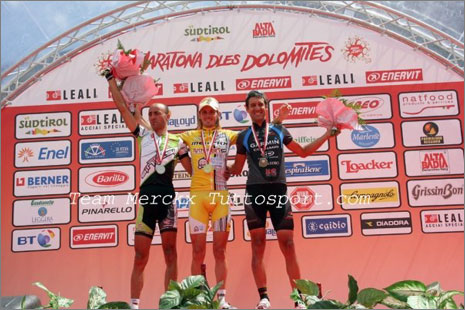 Jamie on the top step of the podium at this summer’s Maratona dles Dolomiti.

PEZ: How hard is a Fondo compared to a Continental level race?
Jamie: You only race once-a-week, so the regime is different, but the courses are what I dreamed of riding when I was a pro. Passes like the Gavia and Mortirilo; I didn’t do those as a pro – If you can climb, then you can get results. When I first started to ride them I thought I would do it part time for enjoyment, and to win some money to help set up my business. I saw that you could win good money if you get results, but to do it properly you have to train full time – like a pro.

PEZ: Is old Raimondas Rumsas still on the go in the Fondo world?
Jamie: No, he buys cars now and ships them back to Lithuania to sell; I’m surprised – I thought he’d keep riding, he was still going well. But when I started he was head and shoulders above everyone else; next to Lance, he’s probably the most professional rider I’ve ever seen. 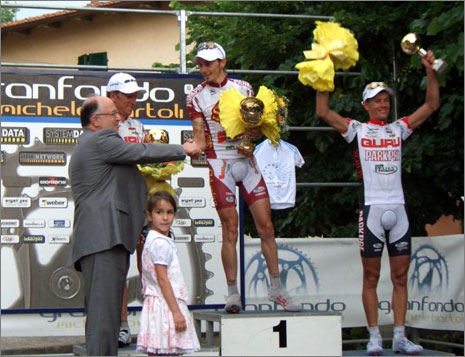 Jamie on the top step of the podium with Raimondas Rumsas in 2nd place to his left.

His attitude was that one race is as big as the next and you should try to win them. Some people liked him, but a lot of people didn’t; he was one of the first pros to ride them – he was like a senior riding against juniors. The pros didn’t ride them back then; but now there are maybe 20 ex-pros in the fields.

PEZ: How many events do you ride each year?
Jamie: Around 28/29; once per week; you’re paid by the team to win them or to keep the win in the team – Team Merckx TuttoSport.com in my case – which will be four or five riders. It’s not like a pro team where you ride 70 races and try to win five; the team wants results every week. 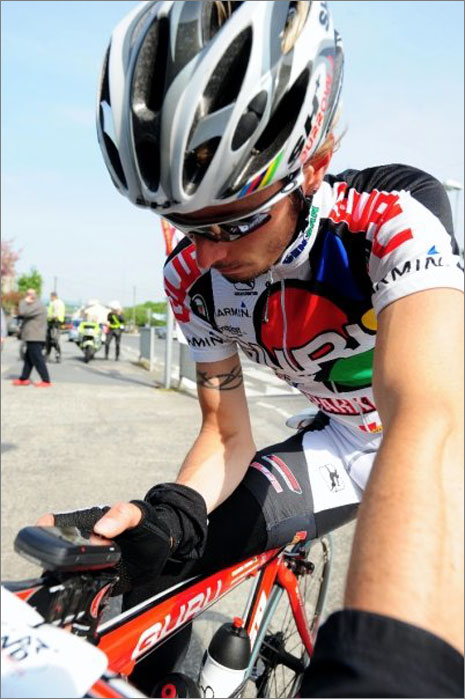 PEZ: Can you live on the prize money?
Jamie: The prizes tend to be product, but that can be sold for cash and the money split. The teams are all sponsored by cycling related product manufacturers – the exposure in Fondos sells more equipment than pro races. We tend to have better kit than most pro teams because they only have to support four five riders, not two dozen with three bikes each. 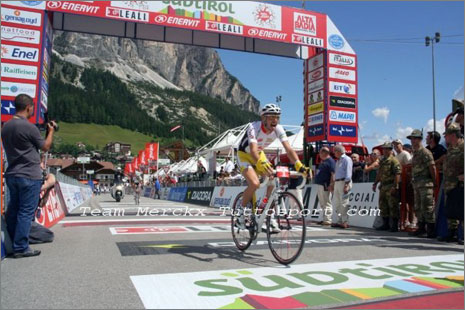 Some of the Fondos have 10,000 starters; if you go into a newsagent in Rimini there will be a couple of magazines about pro racing but maybe eight or nine about Fondos. The Dolomiti is televised by RAI – six hours, live. Not long after I won the Dolomiti I walked in to a bike shop in Rimini, three different couples approached me and said; ‘you’re the guy that won the Dolomiti, aren’t you?’ 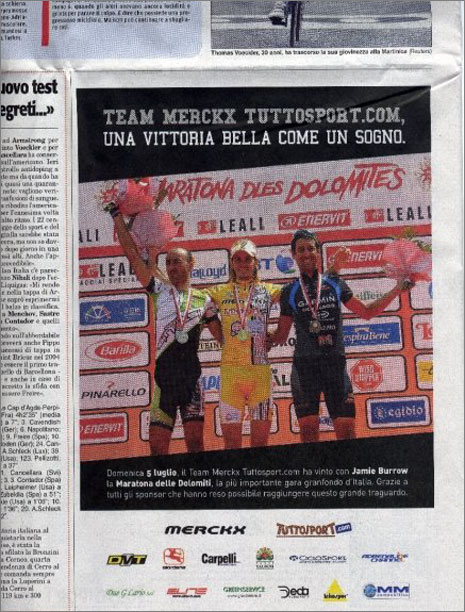 I wouldn’t have got that if I was a pro!

***
With thanks to Jamie for his time – it’s good to see him getting recognition at last.

PEZ Musings: What the Fondo?

PEZ Talk: To The ProTour For Adam Blythe